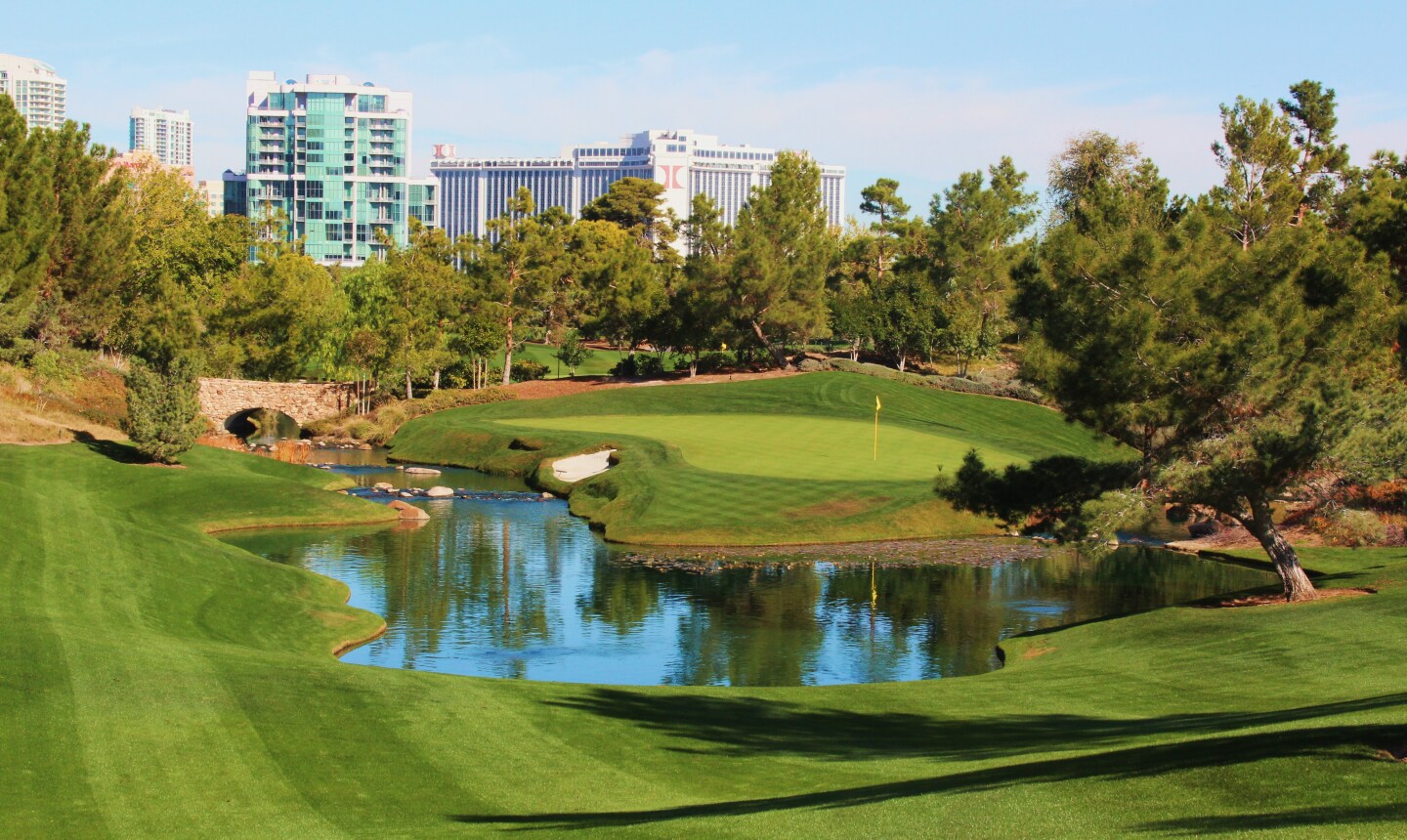 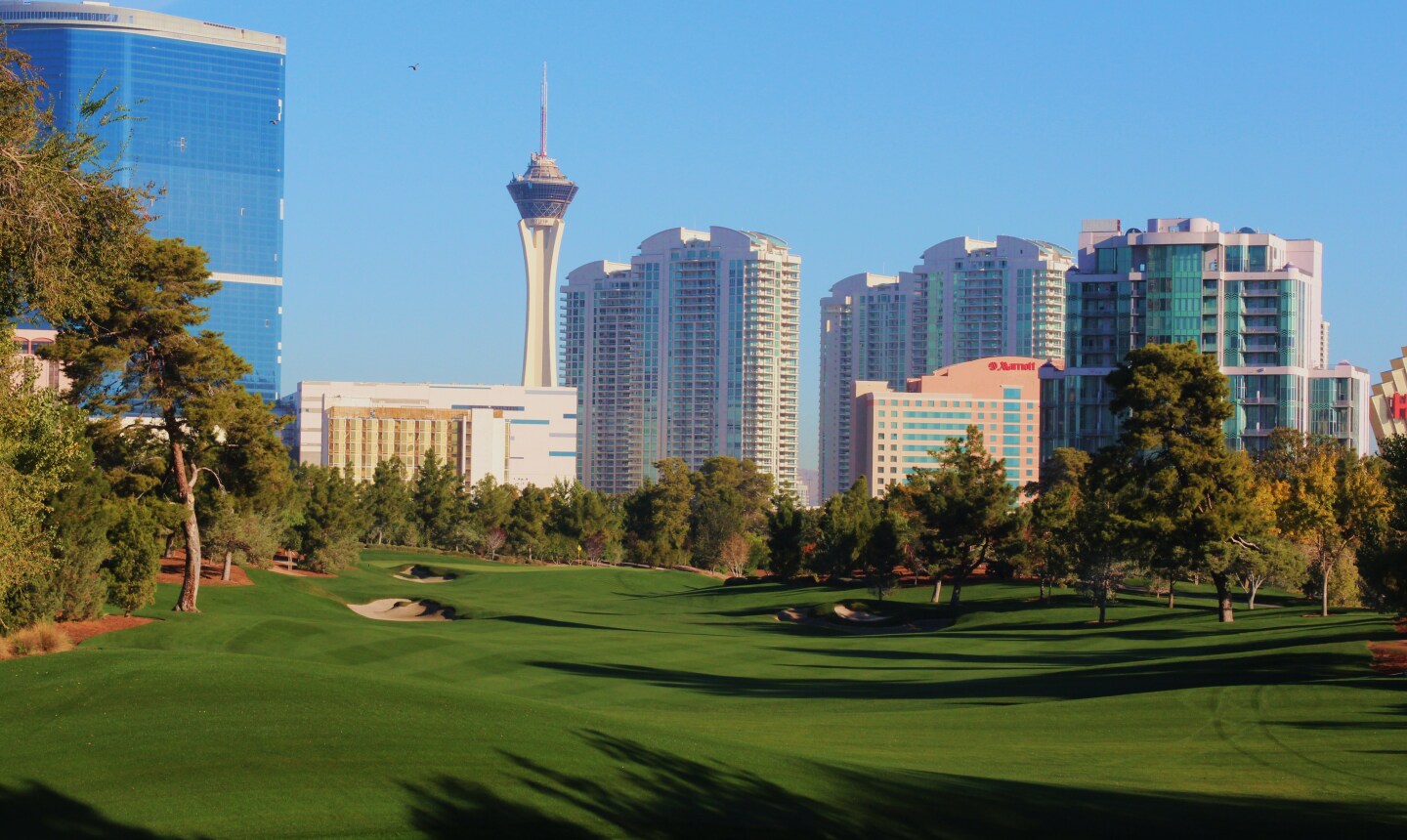 Check out the views of the Las Vegas strip on the fourth hole at Wynn Golf Club. Jason Scott Deegan/Golf Advisor 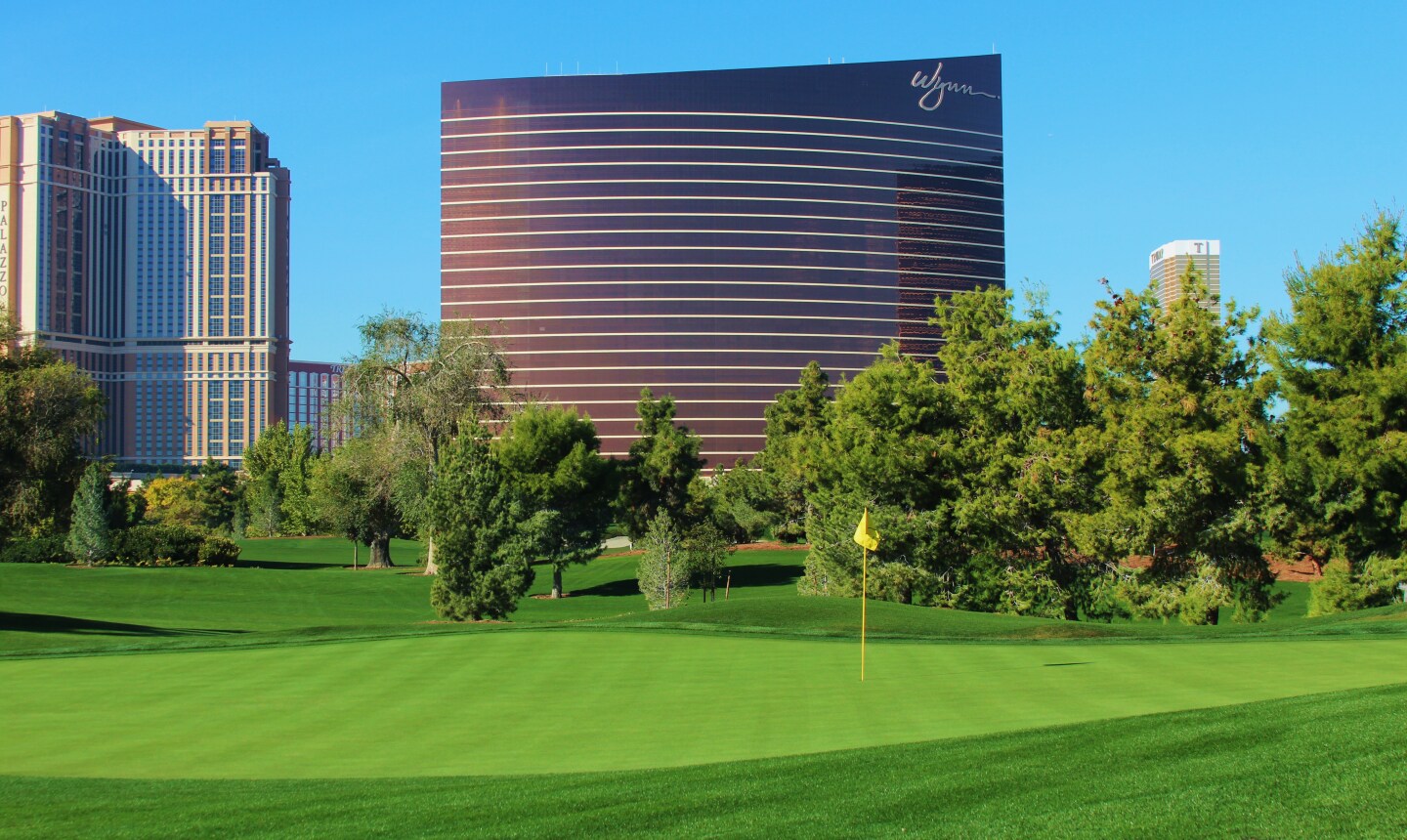 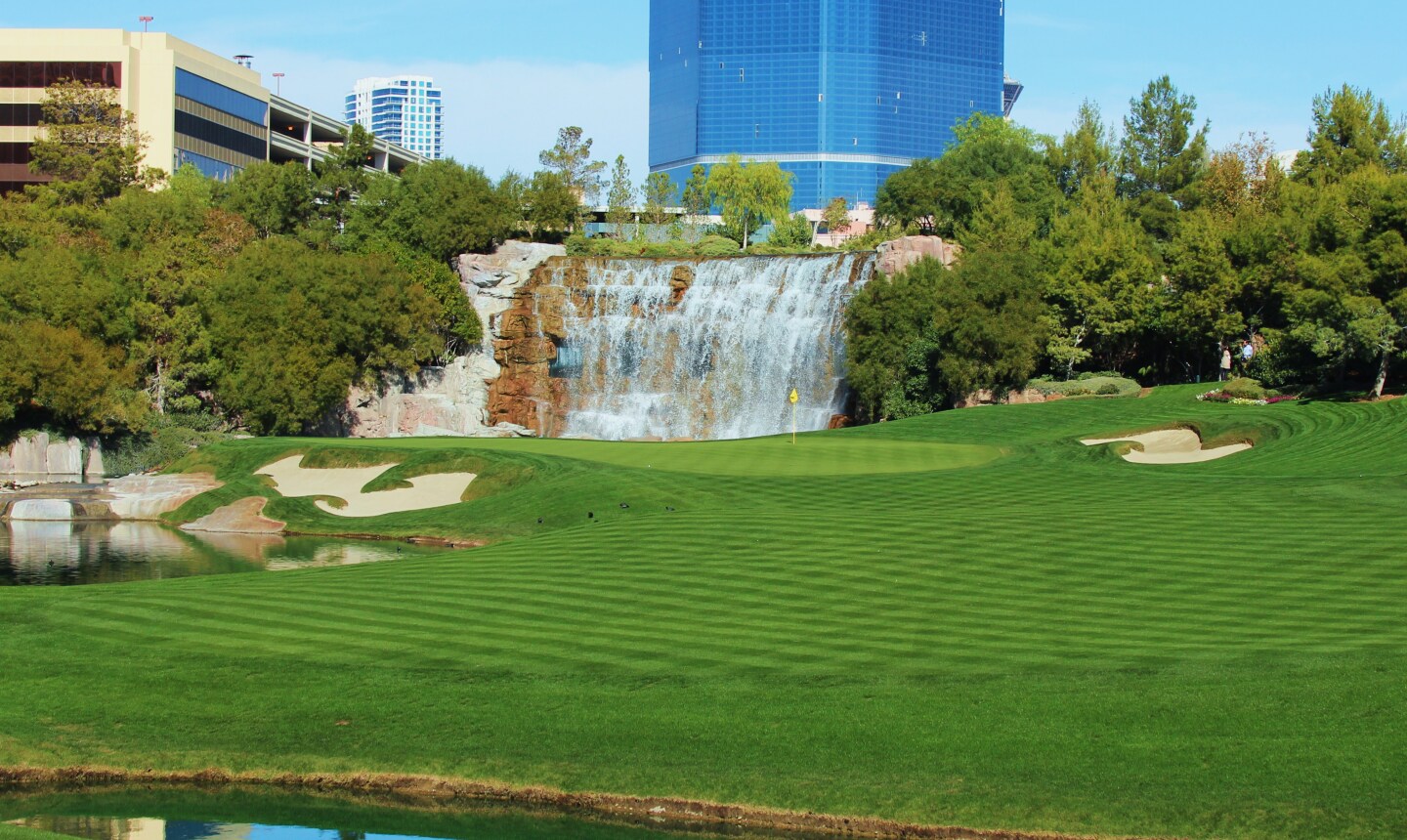 UPDATE: Wynn Golf Club reopened for play in 2019. read our report from the grand reopening here.

The final days of the Wynn Golf Club in Las Vegas are closing fast.

Michael Weaver, Wynn's senior vice president of marketing and communications, has indicated that the course is closing Dec. 17.

The golf course's 137 acres will be used to create "Wynn Paradise Park," a $1.5-billion development approved by Wynn's board of directors in April, according to a CNBC report. Paradise Park's centerpiece will be a 20-plus-acre lagoon with a beach, possibly another hotel tower and casino and extensive dining and nightlife attractions. The elaborate water feature will be used for watersports by day and entertainment by night, such as firework shows and an elaborate Disney-style production much like Fantasmic! at Disney World in Florida.

The Wynn is the third golf course in greater Las Vegas to close within the past several years, joining the 27-hole Badlands Golf Club and the 27-hole Silverstone Golf Club. The pending closure leaves Bali Hai as the best golf option closest to the Strip for public players. The Legacy Golf Club in Henderson closed for awhile but is reopening after members and property owners and a new owner banded to together to save the course.

There has been no recent talk of golf being included within the park. The game has been played on the site since the earliest days of the Las Vegas Strip. The old Desert Inn Golf Club opened in 1952. The mostly flat, featureless course hosted more than 35 professional tournaments before it was blown up in 2001 to make way for Steve Wynn's twin hotel towers, Wynn and Encore, and the Wynn Golf Club. The Tom Fazio design that debuted in 2005 became a symbol of Vegas excess along Las Vegas Boulevard. Its $500 green fee - one of the most expensive in golf - was only for high rollers and serious players.

Fazio, who worked with Steve Wynn in creating another $500 round of golf at Shadow Creek in nearby North Las Vegas, salvaged nearly 1,200 existing trees from the old Desert Inn and brought in nearly 6,000 tree specimens and 100,000 bushes to create a private, intimate experience on each hole. Modern shaping techniques decorated the 7,042-yard par-70 layout with streams, ponds, bunkers and subtle elevation changes. Its most talked-about, and controversial, feature was its roaring waterfall behind the 18th green.

The waterfall and high green fee made the Wynn one of golf's most polarizing courses. I've played it twice, prompting the same question time and again: Is it worth it?

I came to appreciate the whole experience more the second time around. It's kept in mint condition, although a recent three-star review on Golf Advisor indicated that could be changing.

The best part of its design were five riveting par 3s. The food served inside at the Wynn Country Club or on the patio overlooking the 18th green ranks among the best I've had at a golf "clubhouse." In that way, Wynn's commitment to making golfers feel special couldn't be replicated many other places.

Part of me will miss it. Another part of me says it's probably good for the game that such an over-the-top, over-manicured and overly expensive and exclusive club is gone. Golf needs fewer of those.

Remaining tee times are available online at GolfNow for $500.

THE OLD D.I. WAS GREAT FUN AND AFFORDABLE FOR THE $#5 BETTORS TO PLAY. I WAS ONE OF THEM AND ENJOYED THE OLD D.I. COURSE NUMEROUS TIMES ON LAS VEGAS VISITS. TURNING THE ENTIRE GOLF EXPERIENCE IN L.V. IS NOW A HIGH ROLLERS GAME , LEAVING ME AND MANY OTHERS O U T . GUESS WHAT? THERE ARE OTHER DESTINATIONS FOR GOLF AND GAMBLING FOR "LOW ROLLERS" L.V. GOODBYE.

There's a reason it's "reduced" to $350.   They always let it go right before they close for overseed in Sept--at least that has been the case over the years (I've played it a dozen times or so at various times of the year since 2009).  I'm not an agronomist but the heat and the excessive need for watering and the switch to Rye causes lots of dead grass in late July and August.

Once it re-opens and recovers, there are few public courses in America in better shape Nov-June.  That was especially true this year.  I played in April and it was in the best shape ever--fresh flowers, no blade of grass out of place, etc.

It was expensive but getting comp'd wasn't impossible even as a mid-roller ($100 a hand for 5-10 hours and a host in a good mood got me on for free more than once).  The place had it's detractors--and understandably so--but I for one will miss it, miss my usual caddie, and miss the convenience of walking from my room to the first tee with the Strip as my backdrop.  RIP Wynn CC, and prayers to those losing their jobs.  i hope they land on their feet.

Thanks for the inside info. Appreciate the comment. Somebody losing a job is never good.

Kira K. Dixon
Lifestyle Correspondent
Now Reading
Wynn Golf Club in Las Vegas set to close Dec. 17
New Cookie Policy
WE AND OUR PARTNERS USE COOKIES ON THIS SITE TO IMPROVE OUR SERVICE, PERFORM ANALYTICS, PERSONALIZE ADVERTISING, MEASURE ADVERTISING PERFORMANCE, AND REMEMBER WEBSITE PREFERENCES. BY USING THE SITE, YOU CONSENT TO THESE COOKIES. FOR MORE INFORMATION ON COOKIES INCLUDING HOW TO MANAGE YOUR CONSENT VISIT OUR COOKIE POLICY.
CONTINUE
Search Near Me