The 19th Hole is Great For:
Drinks 8
Dinner 6
Patio Dining 6
Course Challenges Include:
Bunkers 8
Plays Long 7
Water Hazards 7
This course/club is great for:
Advanced Golfers 7
Entertaining Clients 7
A Bucket list/Top 100 Pick 6
This Course's Location is:
At a Resort 7

Accuracy over length is key to scoring here

The Champions course is a bit of a contradiction: Players here should be mentally prepared to navigate water hazards on 16 of the 18 holes. That being said, I found the course to be imminently playable, and most importantly, scoreable.

In addition to the abundance of H2O, there are pitfalls to avoid. Green side bunkers are deeper than most. Moreover, if you find yourself in one, you are often juxtaposed across from a closely-mown green side runoff, or another hazard. The best example of this is at the short par-4 fourth hole. It is cleverly designed. A fairway bunker down the left side of the fairway draws one’s eyes on the tee box. But there is a ton of room to the right. Playing ~330 yards from the blue tees, most players will try to blast driver or 3W over the bunker to get as close to the green as possible. Today, the pin was up front, placing a premium on the approach shot. With a metal wood off the tee, a player can find themself with a half shot in. The front half of this green is not designed for a half shot because you have to hit it high and stop it fast. A cavernous bunker sits right-front of green side and anything missing short or left rolls down into one of those tricky closely-mown collection areas. I think it is a better strategy to lay up off the tee (I hit 5 iron and had 130 yards in) so you can have a full shot in and spin it. Players in my group alternately hit their ball from the bunker to the collection area and back into the bunker. Another hit three putts trying to escape the collection area without it rolling back to their feet, before putting it into the bunker.

Hopefully, you are picking up that this is not a long course. It plays shorter than the listed yardage. The key to playing well is getting your ball into the right positions.

The greens were very quick. Pay close attention to the grain and trust your forecaddie’s reads.

Conditioning is great this time of year in anticipation of the looming Honda Classic.

The Bear Trap’s bark is a bit more than its’ bite, in my opinion. The tee shot at 15 is a little uncomfortable, but even with a back pin, it was still just a 9-iron. The 17th was merely a wedge. There are harder holes earlier on the back nine, particularly Nos. 11 and 14.

Finally, as enjoyable as my round was, the price to play here is a reach. Forecaddie fee is included in the rate, but gratuity is extra. For a greens fee north of $400, I’m not sure the value meets the experience. I suspect that this is largely a result of the booming conference and convention business that churns through the resort. It’s definitely an expense account destination.

Everything You'd Expect from a Tour Quality Course

It was everything you've seen on TV. Great condition. Great playing features for all levels of play.

Great place to play and definitely a bucket list item.

Best track for testing your game

What’s a real golf course ? The answer is the champ course, no mercy,no bail out, and tons of risk rewards opportunities!
One of my all time favorite tour stops and the after round pool is amazing!

Challenging due to water being in play on what seems like every shot. The greens are receptive and provide a fair test without being punishing, getting to the green is where the difficulty lies. Worth a visit by an true golfer.

Played practice round in 90 degee whether then when it was time to play 35 mph winds and in your face for the Bear Trap, still shot 83!!! Even through the bear trap.

I have been a member at PGA National for about 4 years and i have witnessed the quality of the courses dropping. New ownership took over the course and the club told everyone things were going to get better. Unfortunately, this is not true. The courses have all deteriorated and lately, its embarrassing. There are literally brown spots everywhere, and no one is spending time fixing the details (and this is not because it is the summer bc other public courses dont have the same problem, maybe try turning on the sprinklers and using some fertilizer) Eventually, the details become overwhelming. I have attached pictures of the condition of the Champion, which is the flagship course. In the past, the service, and hotel rooms were subpar, but now, the courses are being neglected as well. There is trash all over the course, theres brown spots everywhere, and the courses are not maintained like other public courses in the area. The club will charge guest $150-$175 to play the champ, and the greens are full of sand. It definitely doesn't play like a private course, it plays like a municipal course. Dont get me wrong, the layout is awesome, but the whoever is the greenskeeper, they need to address the details. I dont understand why they can't send two guys out during the day and have them fix up the little things that are no consistent with a private club, let alone a PGA tour stop. I heard the PGA tour threatened to take away the tour stop because the greens were in such bad shape for the Honda Classic. The club clearly cares more about making money then the members. Trust me when i tell you they are very good at taking your money, but they won't treat you like its a prime country club. Tons of members are leaving the club because the service is terrible, i am sure even more will leave bc of the conditions of the courses.. The champ range is not open half the time, and the club promised it would be for the members. The attitude of the employees are unacceptable and they act like you are bothering them. Something needs to happen and it needs to happen quickly. Look at the pictures i posted.

A Champ Perhaps, But Not A Classic

Sluggishly-paced round on a bucket list course was highlighted by stellar service from the pro shop staff, starter, cart attendant and beverage cart server. Ditto for staff for course snack bar, which offered tasty bar fare. The course? Well....from the blue tees, The Champ is not particularly stimulating visually nor it is especially tough, save No. 16 - the middle hole of the renowned Bear Trap - and No. 18. Back nine is more stout than front due to water hazards and placement of bunkers, several of which were concrete hard. The fairways and greens were brownish in spots with greens running a bit slow. Worth at least one trip around this very popular course, but not a second trek, unless the price is right.

PGA National is a huge resort with 5 courses. Today we played the Champions Course where the play the Honda Classic..it was a nice Course, but not too visually appealing. The course was in good shape and it was fun to play where the pros play.

Appropriately named, the "Champ" is a middleweight test

Playing a round at PGA National's Champion Course is a bit like stepping into the ring with a boxer. You need to stay alert at all times, because if you take a temporary vacation, even for a single shot, you can get knocked down in a hurry. Surviving to the end with your wits about you is a victory in itself, and a rewarding one. It toughens you up, because if you can play well here, you can play well anywhere.

Also worth noting, the course's recent greens expansion has made approach shots a little more manageable, though the firmness of those new putting surfaces makes shots from the rough almost impossible to keep on the green. Drive it straight if you can.

The Florida weather destroyed the course. The staff offered many acceptable options but it was a bucket item list for me. So this review is not indicative of anything but bad weather. The entire PGA National experience more than made up for it. Pro shop to service staff....plain awesome!

Played this course over the past weekend and was so excited to tee it up where the pros play every year. We played the middle tees, and it was a good idea as I can see this course being very long, thus the championship caliber. Couldn't ask for a course in better shape and for being the prime track at the resort, there was little to no traffic. Bear Trap is a great experience, though for my money the 18th hole is just as difficult. Finishing the round right in the front of the great facilities at PGA National was a real treat and very special experience. Will definitely be back.

Extremely challenging and extremely hot outside but a ton of fun. Highly recommend this course. The staff was great, the course was in great shape, etc.

Finally got to play this course IRL

After only experiencing the Champ on TV and in video games, I was excited to finally get the opportunity to play it. It was closed the last time I was down there. I'm happy to say that I was not disappointed. My only complaint was that the greens had recently been punched, but that's going to happen when you play in FL in August. I still managed to mix in a few birdies, which helped ease the pain of the Bear Trap, where for the first time all day we saw 3-club winds in the face.

This is definitely one of the most difficult course I have played. The setup was fair, but there is definitely a premium on the tee ball. Greens had some interesting undulations but were very receptive. The Bear Trap is an exciting stretch of three holes that were a nice balance of scenery and difficulty. I highly recommend trying this course out.

Champions Course was my favorite

Was warned that this course was one of the toughest on tour, but I must have been shooting lights out as I thought the Palmer was much harder. Greens were recently punched but the ball still rolled pretty good for the maintenance being as recent as it was. Some nice challenging golf holes and the bear trap did not disappoint. 16 can create a beast of an approach shot with the wind in the face. A great signature course at a great resort.

Playing PGA National was a great experience from valet to valet. The pro shop was well run as well as cart set up and the starter was fantastic. We played with a forecaddy who was knowledgeable and entertaining. The course itself was in amazing condition and with the tournament setup in progress it was certainly a different look to play holes with bleachers around them. The Bear Trap was a fun run of three holes with water coming into play which made for three different challenges. I would recommend this course to anyone heading to the Palm Beach area or, like myself, the drive from Miami is worth it to ply this gem. I have played over 250 courses in my life and for me this was a Top 10 course played. Condition was topnotch with fantastic greens and thick rough which made for a true test fo golf. 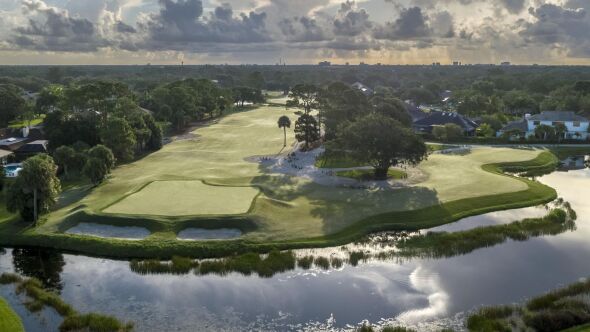 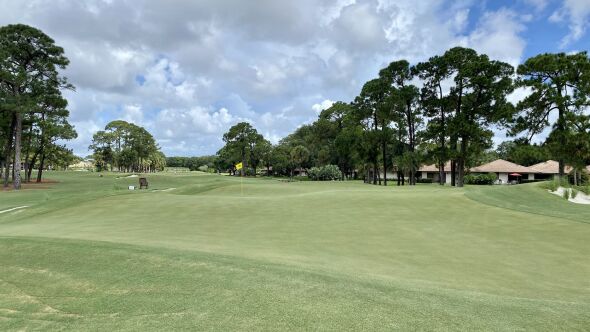 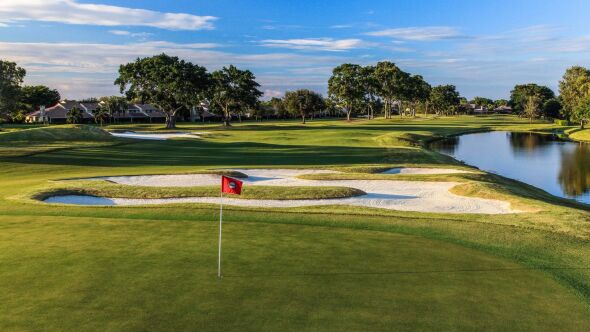 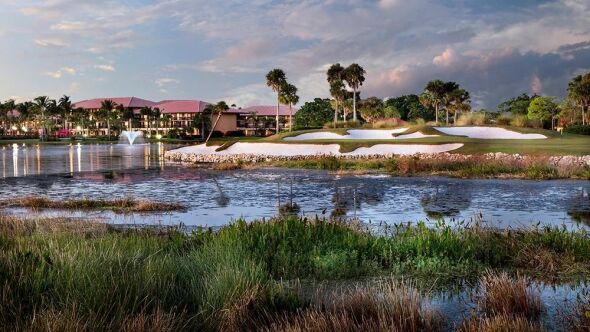 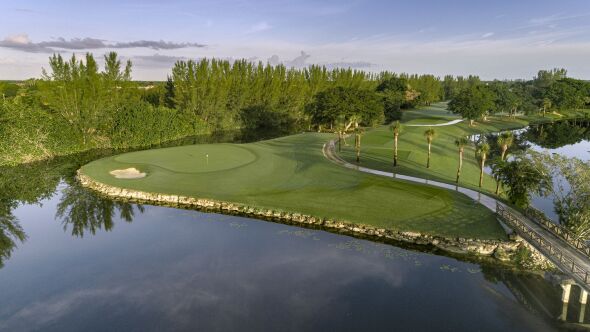 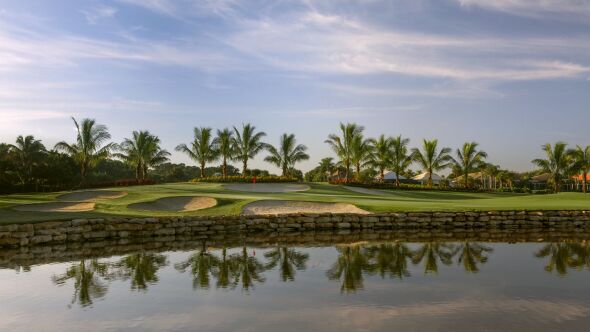 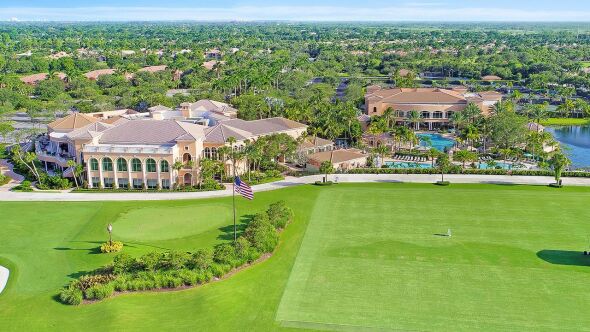 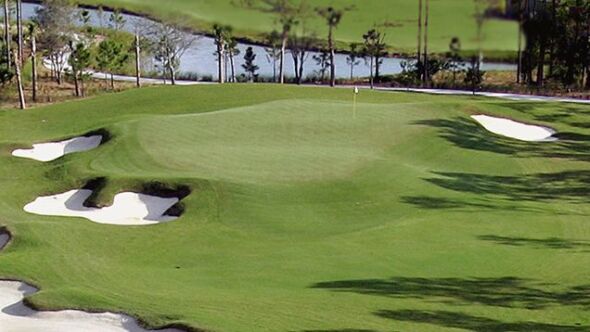 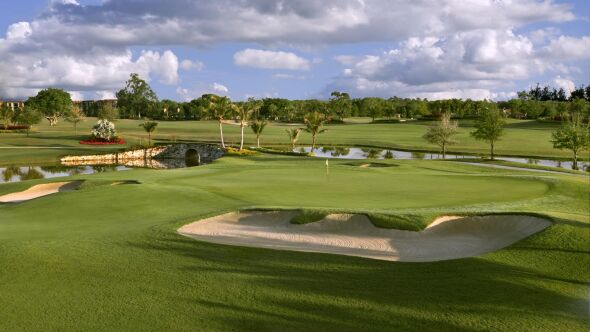 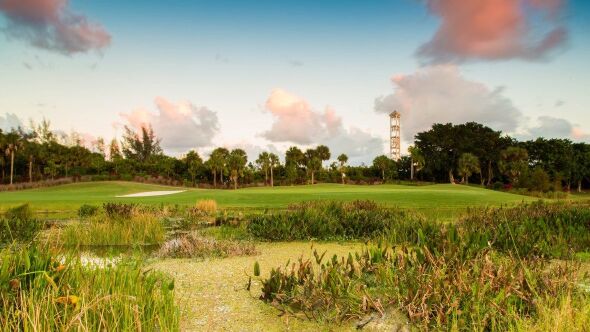 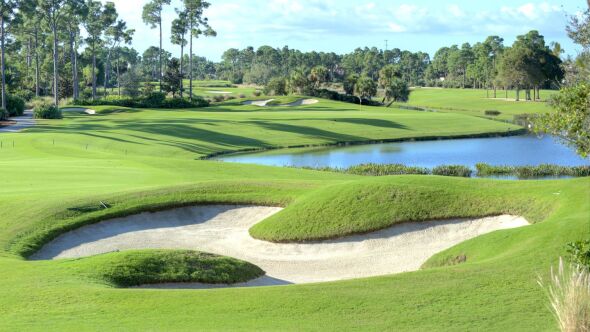 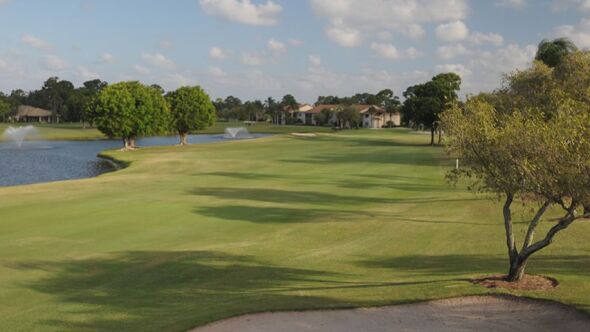 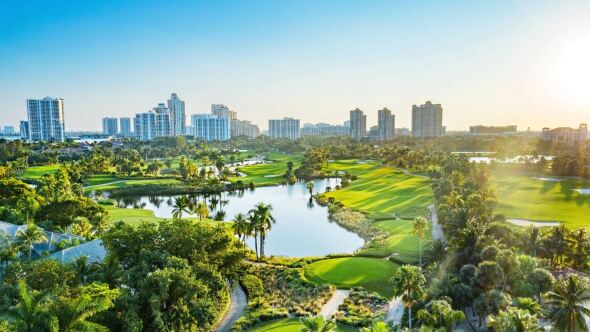 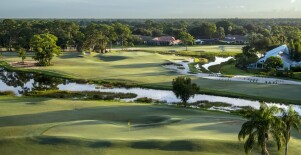 Articles
'Where my 6 beats your 7 every time' 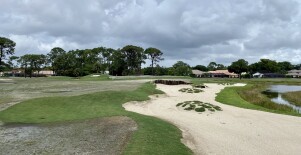 Articles
15 notable golf course renovations to be unveiled in 2021 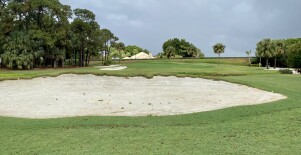 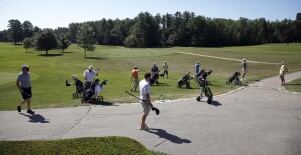 Articles
The golf course is a valuable 'third place,' now more than ever
Next Page
Load More

Get to know the Champion Course at PGA National
3:04 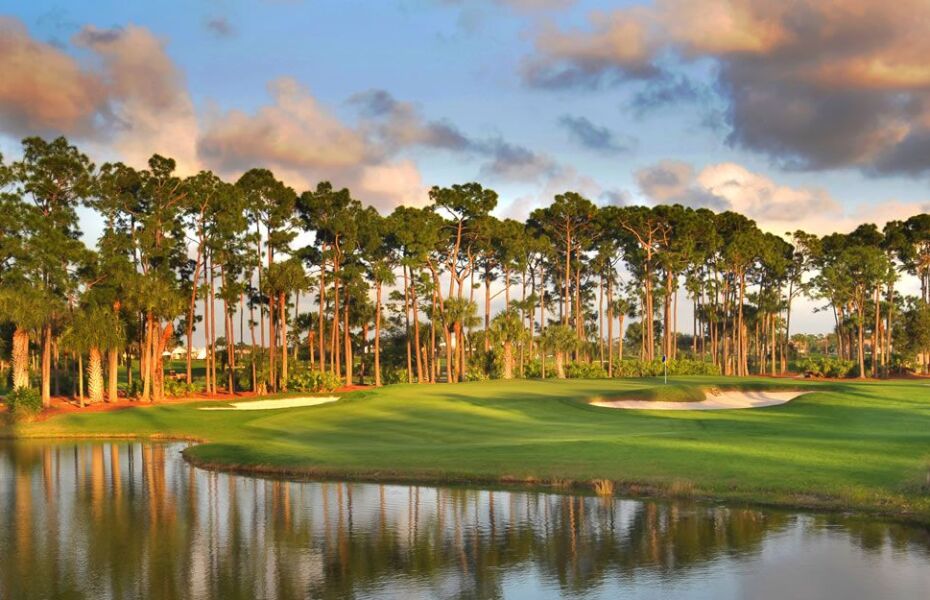 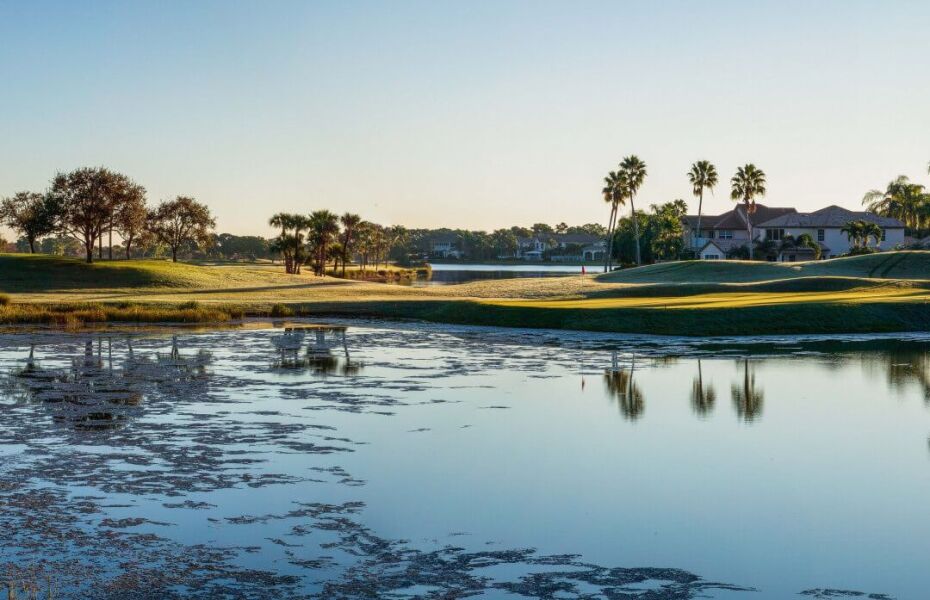 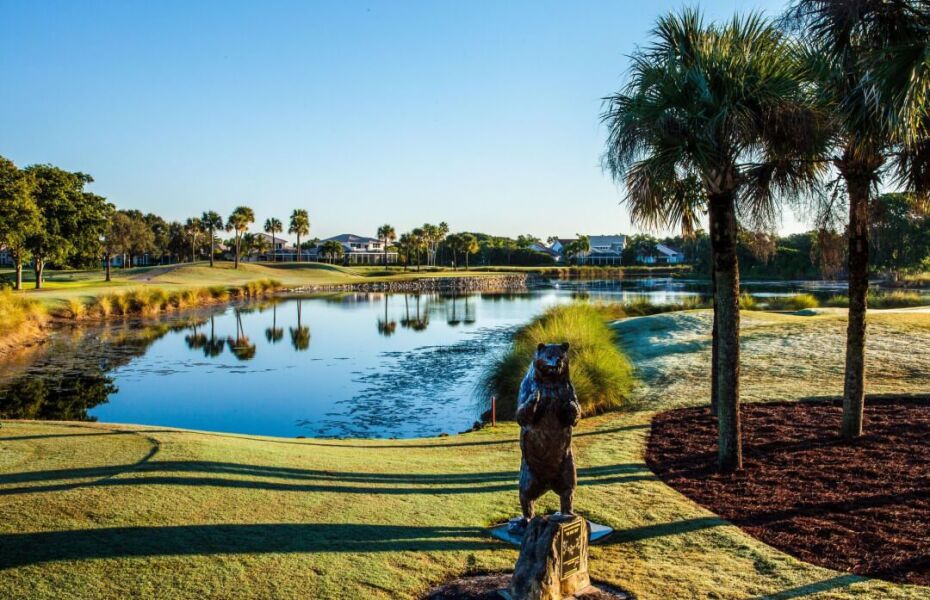 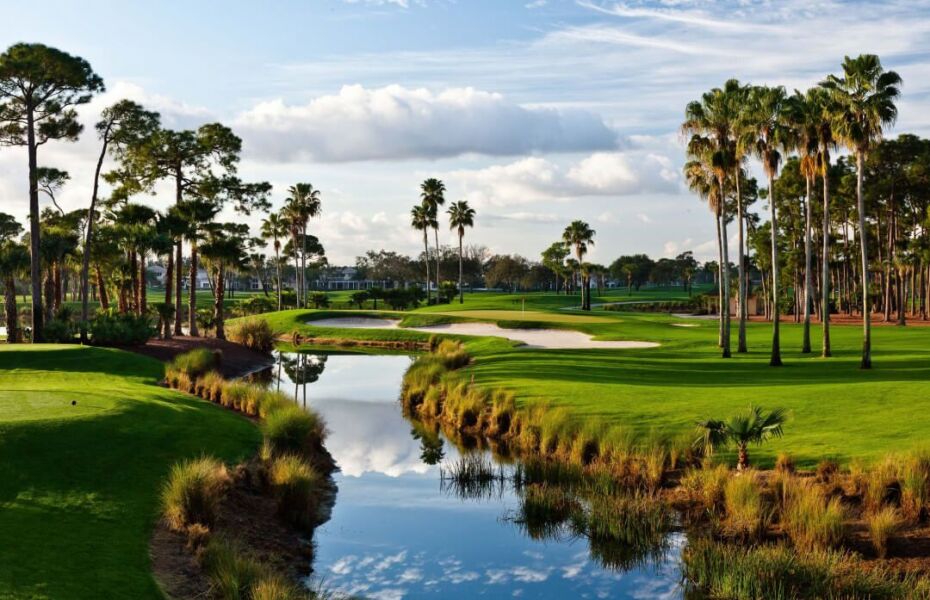 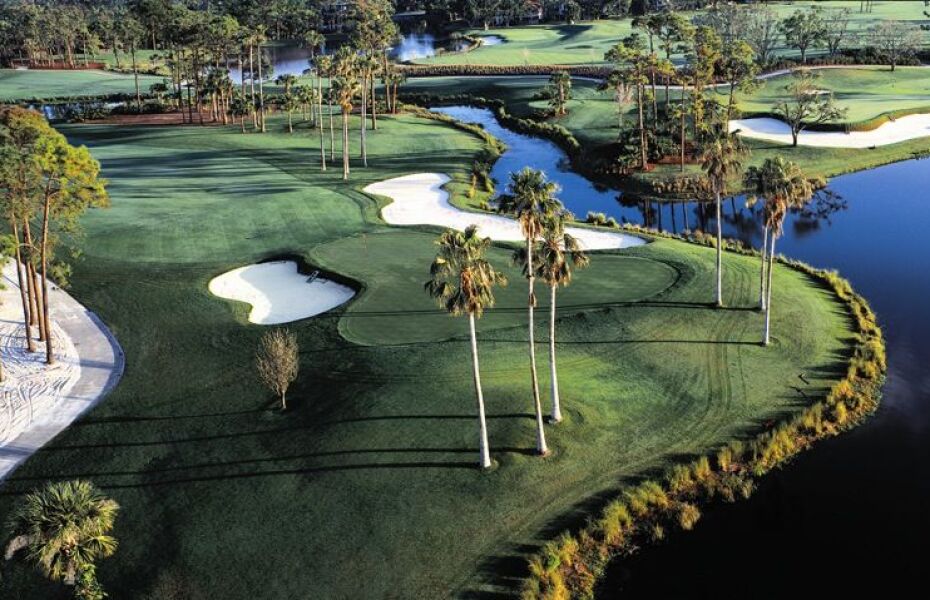