I was fortunate enough to be invited to play at Medinah on their annual Camel Trail day. It was a long day playing both course #1 and course #3 along with being served breakfast, lunch, and dinner. Should anyone be offered a chance to play at this private club, jump all over it. Do whatever you have to do, pay whatever you have to pay, but this is not an opportunity to be missed.

Course #1 is a Tom Doak redesign. When Medinah hosted the Ryder Cup in 2012, parts of this course were destroyed for the infrastructure for the event. Medinah then used some of the money they got from hosting the Ryder Cup to have Doak rebuild and reroute the course. With this being the first time I’ve played the course, I can’t compare the original Bendelow design to the Doak redesign. Having played The Loop several weeks before Course #1, I noticed a lot of similarities between the designs but the two different environments provided several contrasts as well.

Similar to The Loop, the greens on Course #1 are how the course primarily “protects” itself. There are so many tiers and ridges in each green that you will very rarely, if ever, have a straight putt. Three and four foot putts on this course are no gimmies. Depending on the pin placement, a good lag putt is often short of the hole. If you run the putt even one or two feet past the hole, you can catch a ridge and end up with a 20 foot comeback putt. A birdie can quickly turn into a bogey or worse on this course. Likewise, small pitches and chips are no guarantee to tidy up close to the hole. The greens are slick and unless you put a lot of spin on the ball, the shots will run out quite a bit.

The course itself is a parkland layout with mature trees lining many of the fairways. The landing areas off the tee are generous. Should you miss the generous landing areas, the next shot out of the rough or the trees will make bogey or double bogey a very distinct possibility. For advanced golfers, playing to a specific side of the fairway is often required for an easier second shot into the greens. Several of the fairways have significant slope to them that will run towards trouble if you’re not on the preferred side.

There are certainly picturesque holes throughout the course. My two favorite holes were the 9th and 18th holes which have the massive Medinah clubhouse as the backdrop. Its also worth taking a couple of pictures on the first tee with the camel shaped bunker in the background.

The bunkering throughout the course, both around the greens and in the fairway are both beautiful and daunting all at the same time. What I found while playing was that depending on the pin placement, it can be preferable to be in a bunker versus being short sided in a collection area. All of the bunkers were in great shape.

The thing I loved about The Loop the most was the playability. While the layout and environment of Course #1 is different, the “Doak playability” is present throughout the course.. There are drivable par 4’s, par 5’s you can attack with a good tee shot, and holes that you can play with a ground game (putting from the fairways). The drivable, par 4, 13th hole is truly diabolical. Should you miss right, there is mounding that makes it nearly impossible to get a pitch to stop on the green. Should you miss left, you have to ensure you are able to carry a strategically placed bunker. If you are lucky enough to carry that bunker, you still are in a collection area below the green.

Unlike The Loop, there are water hazards throughout the course that certainly come into play as a creek winds through the course and a pond/lake borders four holes. The water is really the only thing that would cause you to lose any balls while playing on this course.

The biggest recommendation I can make for someone that has an opportunity to play here is to go to the pro shop before the round and purchase a yardage book (and lots of other Medinah gear). The diagrams of the greens are worth the price of the book alone. The ridges and plateaus are not visible from the fairways so having a detailed diagram to refer to will save you a couple of strokes alone.

While Course #1 is shorter and flatter than the famous Course #3, it is no slouch. I actually scored better on #3 than #1. If given the opportunity to play #1, don’t be disappointed that its not #3. In time, this Doak redesign is going to get more and more love and recognition. As I said at the beginning of the review, jump all over any opportunity to play here. I can't recommend this place enough. For any serious golfer, its heaven on earth.

Great Course, but not Top 100 in the World

I played Medinah #3 with two friends and a member. Is this a great course, and is it perfectly designed to host major tournaments? Absolutely. The entrance to the club with a view of the massive clubhouse, along with the world class practice facilities, are truly breathtaking.

That being said, the course is absolutely overrated. Although I really enjoyed my round, if I had to name my favorite hole on the course, it is quite difficult as many of the holes blend together. If you love dogleg left holes with uphill approaches, you have found heaven at Medinah #3.

Is Medinah #3 worth playing? Absolutely. Is it a top 100 course in the world? Nope.

Medinah No. 3 is one of the best courses in the United States and the drama that has played out there has helped define American golf

History does not make a golf course great, but it is no coincidence that great courses have distinctive history. Medinah No. 3 is one of the best courses in the United States and the drama that has played out there has helped define American golf. Medinah sits outside Chicago and like the city it calls home, Medinah is broad-shouldered and pure beef, but not full of itself. Length off the tee is a prerequisite to playing well at Medinah (the Silver tees are over 7,000 yards, for the 2012 Ryder Cup, the course was set up over 7,500 yards) a stark reality that is underscored by lush conditions. Accuracy with your irons is also an asset (three of the four par 3’s are all carry over water) and the greens are super fast. No shock that my favorite hole is the par 4, 16th, made famous in the 1999 PGA Championship when Sergio Garcia took a miracle swipe from behind a tree and somehow found the putting surface. Finding the putting surface is a challenge even in the best of circumstances as this dog-leg left might be the hardest par 4 in America. 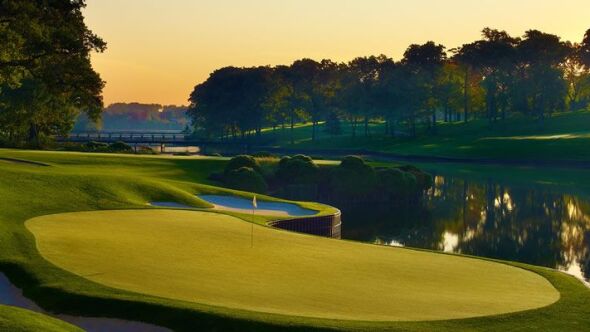 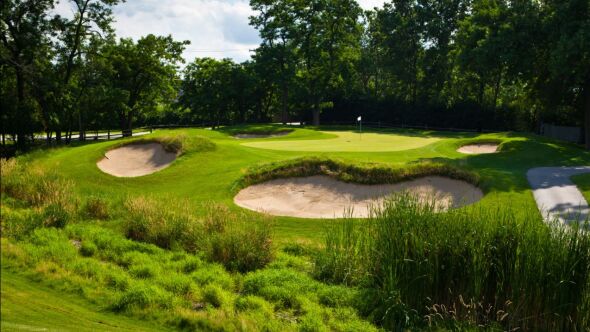 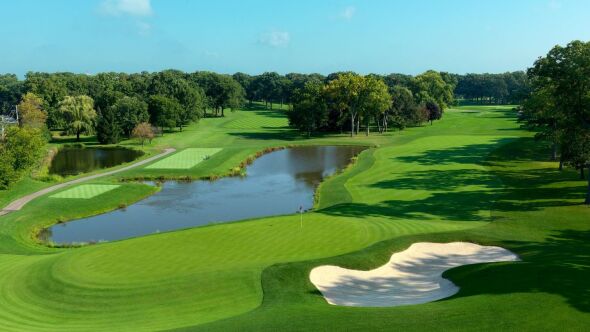 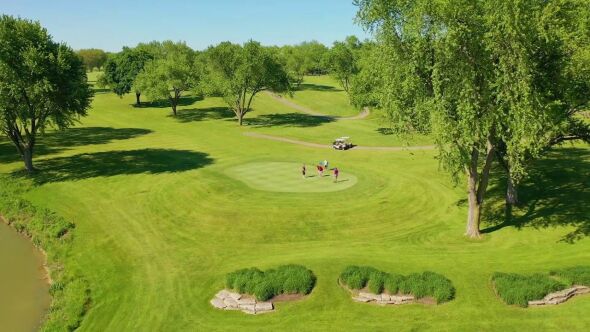 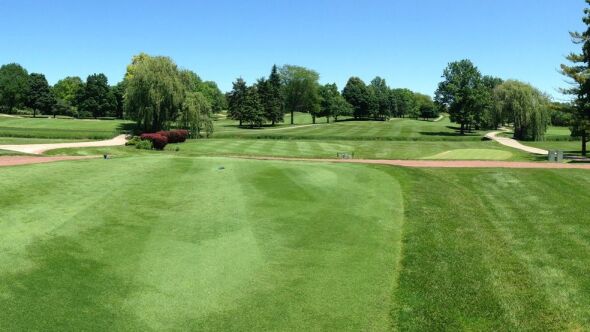 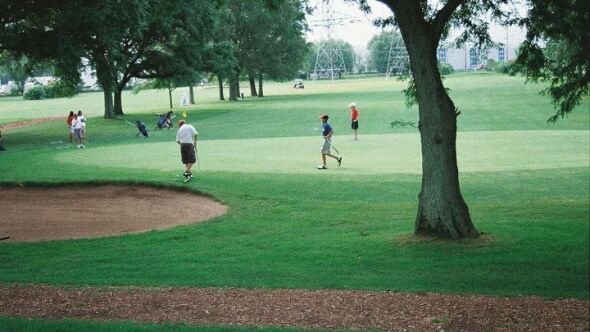 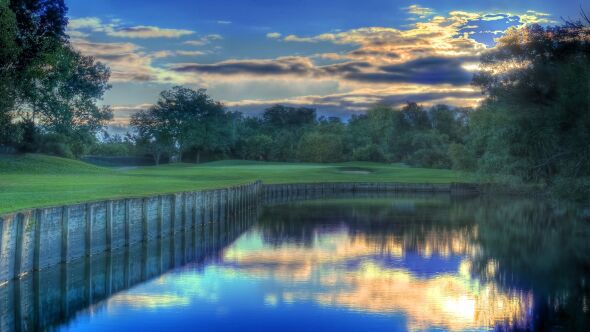 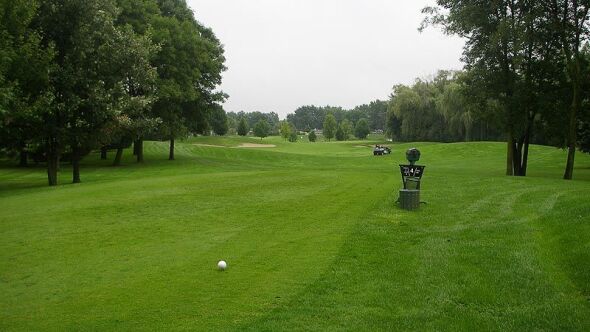 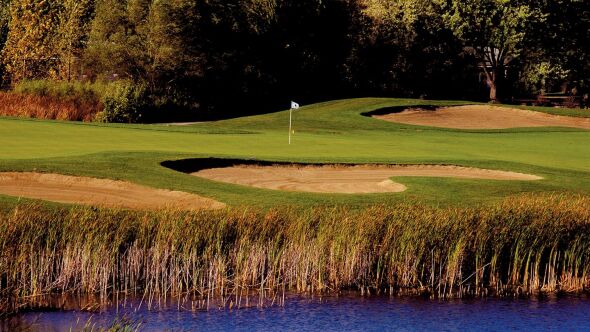 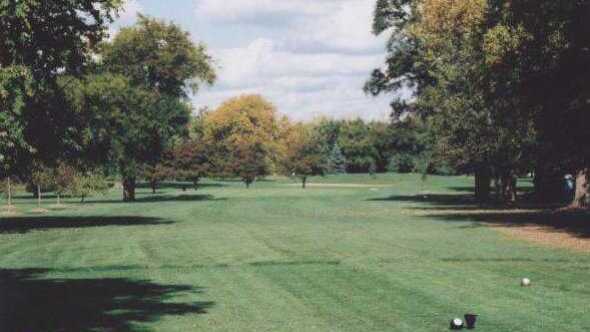 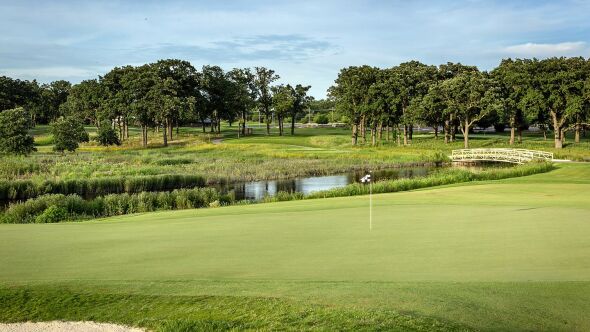 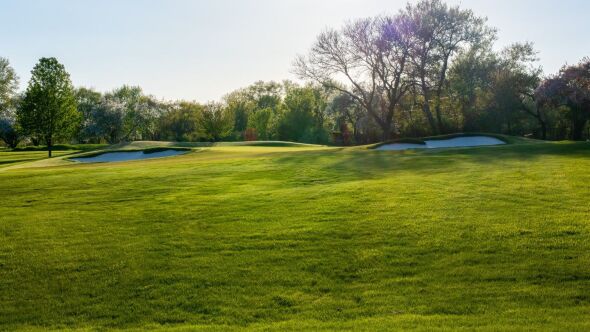 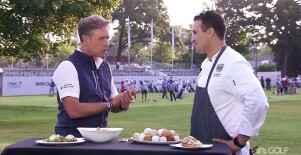 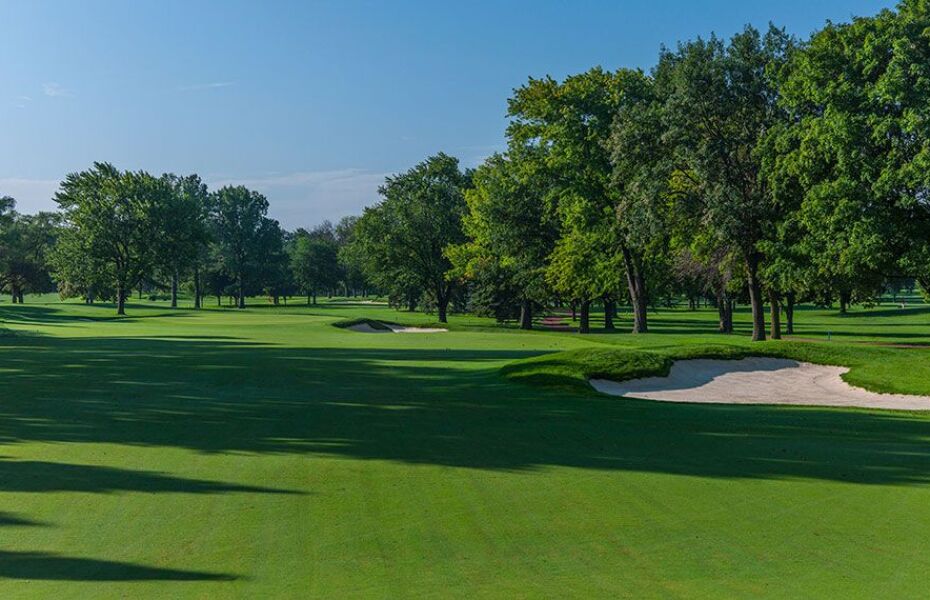 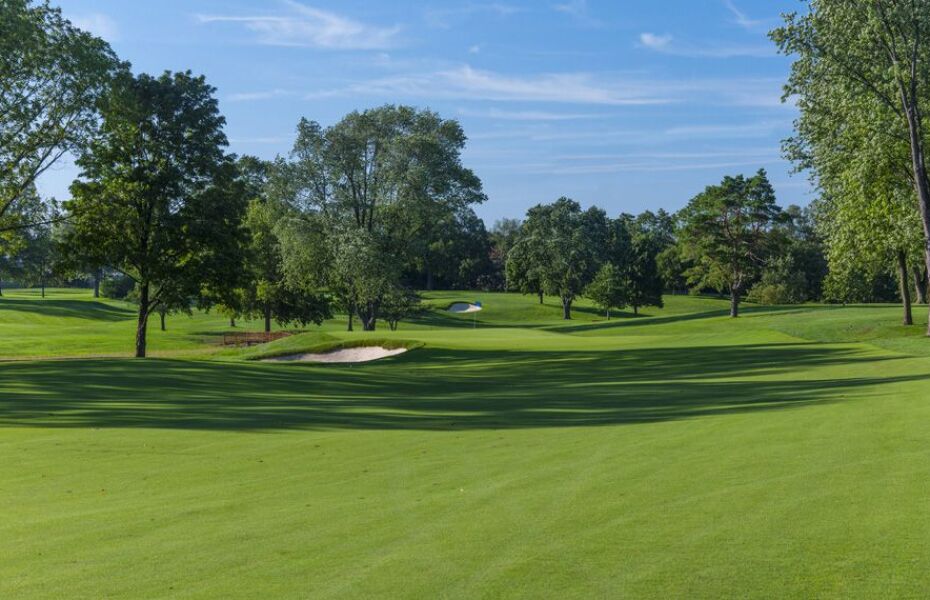 A view of the 2nd hole from Medinah #1 at Medinah Country Club. Medinah CC 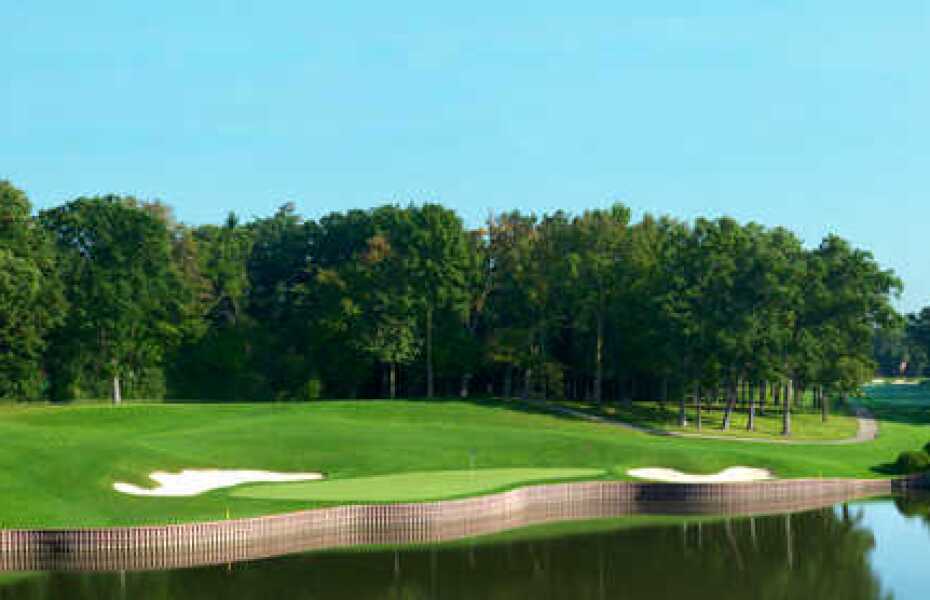 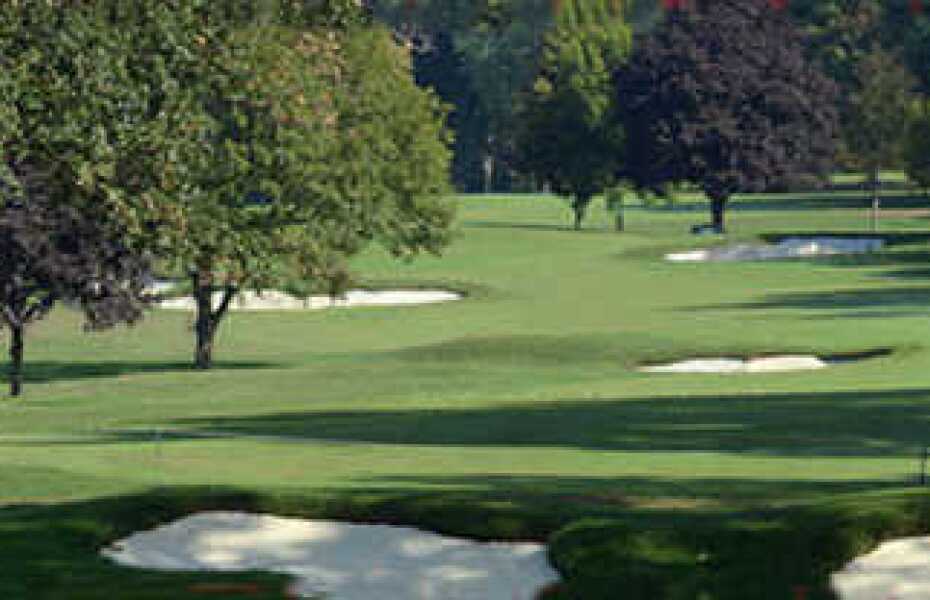