The 19th Hole is Great For:
Drinks 7
Course Challenges Include:
Elevation Changes 18
Water Hazards 16
Forced Carries 10
This course/club is great for:
Locals 15
Wildlife/ Scenic Views 14
A Weekend Splurge 8
This Course's Location is:
Worth the Drive 16

Much better than reviews

I read a lot of reviews about this course condition and still decided to play it because there weren't a lot of last minute tee times available. This course was a lot better than I expected. It was in great condition for being mid October and I love the layout. For the value this is one of the better public courses I thought in the area. I was disappointed there was not a driving range to warm up but as far as the look of the course and the friendliness of the staff I think it's a pretty great value.

Some of the most challenging fairways I’ve played but super fun if you can place the ball. Greens were great! Definitely will come back for the same HotDeal rate.

The only thing in good shape there is the greens. Everything else from the pavement to tee boxes and the "150 yard max" driving range was in a state of disrepair. Sad. Course was probably really nice years ago.

Hi, thank you for taking the time to review the course. We take single star feedback very seriously at our course. You are welcome to comment further or reach out to our team in the golf shop. We always appreciate the feedback.

Booked this 4.4 google rated course while camping nearby. Loved the design of the course, a lack of signage made it a little difficult to always know where you were. Clubhouse staff friendly. But the actual course maintenance was horrible.
Some tee boxes were only mowed with just one strip, fairways and first cut were too tall, even though some were cut that morning as we played, the fringes were covered in lumpy thatch, sand traps were hard (which was helpful), and many of the greens were over sanded and sloooow. Included photo is fairway grass.

Hello, thank you for leaving us a review. We are sorry to hear your experience was anything short of 5 stars, but we hope you will give us another try in the future. Thank you for choosing Tanglewood Golf Course.

We appreciate you taking the time to review the course and rate us. We are going to pass on your feedback to the team. Thanks for visiting Tanglewood Golf Course, and we hope to see you again in the future.

Hello, we appreciate the review. You rated us 3-stars which means there is room to improve on your recent experience at Tanglewood Golf Course. Let us know, in the comments, how and where you would like to see changes from the course. Thanks for the feedback!

Hi, thank you for reviewing the course. Let us first start by apologizing for the poor experience you had during your visit. Your feedback about the course is important to us. We are working to get everything up to par. We have projects ongoing to recover the fairways and greens. The current condition is by no means the standard we strive to achieve. We are going to escalate your feedback to our team so we can make improvements before your next game, and we will continue to work towards an excellent experience by using your comment for guidance. Thank you for playing Tanglewood Golf Course. We hope to see you again soon.

Hello, thank you for leaving us a review. We are sorry to hear your experience was anything short of 5 stars, but we hope you will give us another try in the future. Thank you for choosing Tanglewood Golf Course.

Loved the course and the staff very nice. They have done an amazing job maintaining the course maintenance guys are doing a great job keep it up. Would recommend playing here.

Just my brother and I played. To be honest I thought we were in for a five hour round. There were a scramble ahead of us some five to a team. But they let us play through. Got done 3 and half hours plus that was cart path only. The golf course what I read is improving in condition and I igree with that. Al in all good condition. Have some long holes and challenging. Especially with the blind shorts and uneven lies. Balnced off with some short par fours. If you have not played the course drive ahead and spot your next landing spot. Yes I would like to play again since I know it better.
Ted

Diamond in the rough

Loved the course and the people. Not only was the staff awesome but members were very helpful. Would definitely play this course again. Great value

Course was in excellent condition. Play was a little slow.

Mountain-Style Golf in the Hills of Kentucky

Tanglewood Golf Course is an eighteen-hole golf course in Taylorsville, Kentucky that isn’t easy to find. Unless you’re looking for it, you probably wouldn’t know it’s there but trust me, it’s worth the drive. And I’m not the only one that thinks so. According to General Manager Matt Puckett, year in and year out, groups come to Tanglewood from the surrounding states and the club’s 12 condos and 12 motel rooms start getting booked up for the year by the middle of April.

While there may not be a lot of bunkers on the course, the elevation changes and slope in the fairways and greens more than compensates. Narrow tree-lined ryegrass fairways that play along sloped hillsides produce those dreaded uneven lies and ultimately lead to fast, well-manicured Bentgrass greens. You’ll encounter numerous blind shots, so course knowledge is at a premium.

Tanglewood is full of memorable holes. If you can get off to a good start on the first hole, you’ll probably have a good round. It’s long – 431 yards – from the White tees, with a blind tee shot and a semi-blind approach shot. Other than that, it’s a breeze!

Tanglewood taught me how to deal with blind shots, especially approaches into the green. What I discovered is that when in doubt, hit less club. There isn’t a lot of water to deal with and most of the “trouble is on the peripheries and behind the greens. Coming up short isn’t a bad thing; you’ll keep the same ball in play. I’m sure I would feel differently if I played the course regularly.

Tanglewood is centrally located and within two hours of three major metropolitan cities: Cincinnati, Indianapolis, and Nashville. They offer tremendous stay and play packages with lodging overlooking the #10 fairway and either hotel-style or condo accommodations. Packages start at $220 for a hotel-style room and include 3 days of unlimited golf with a cart and 2 nights stay. Condos start at $250. Tanglewood offers all guests a $10 breakfast buffet as well as buffet-style meal plans that feed groups for $10 per night. Small appetizers are available in the full-liquor bar.

Tanglewood also offers some incredible membership rates. For example, you can play 7 days a week with a golf cart for $1400/year. If you average 10 rounds a month for 9 months, that’s a little over $15.00/round.

Challenging, but fair course. A hidden gem away from it all. Good people behind the counter. 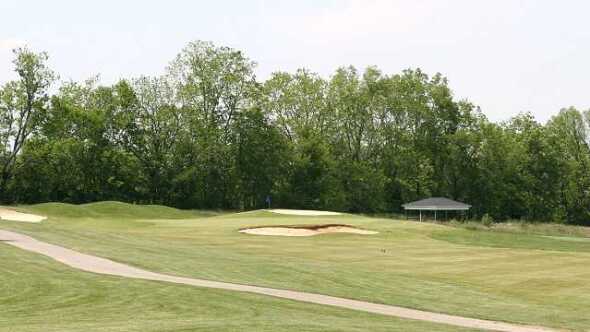 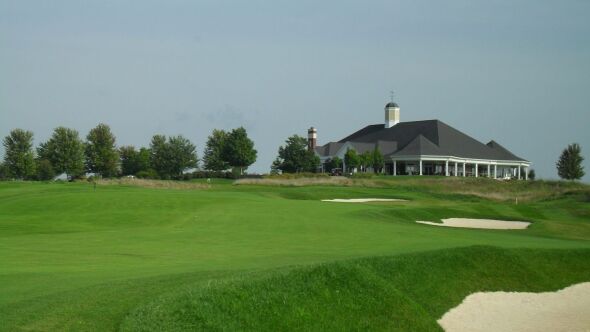 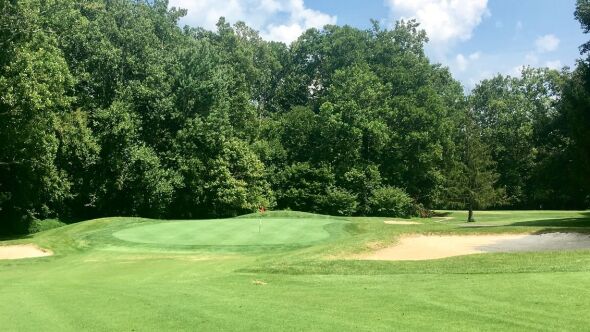 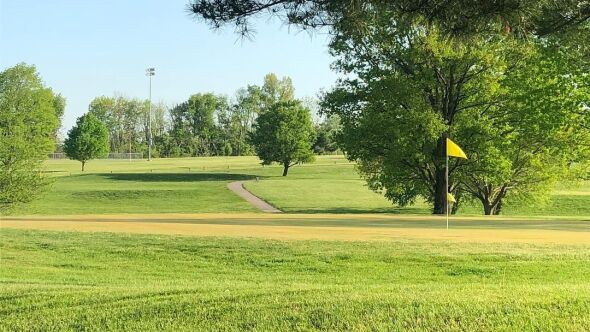 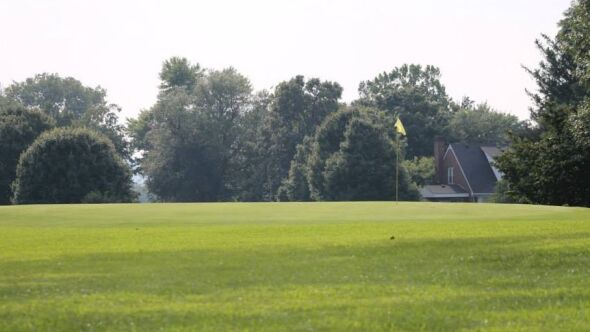 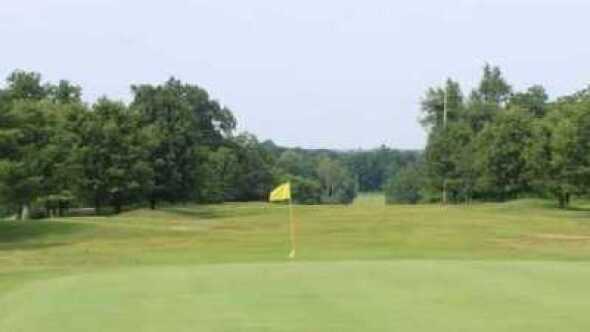 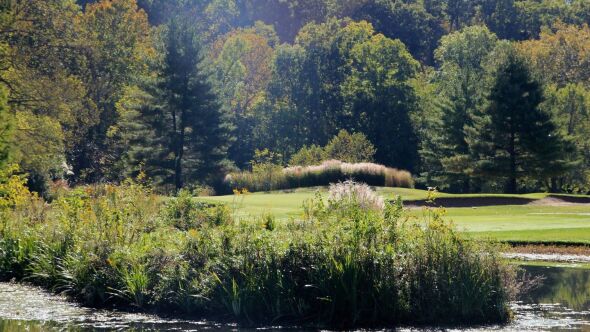 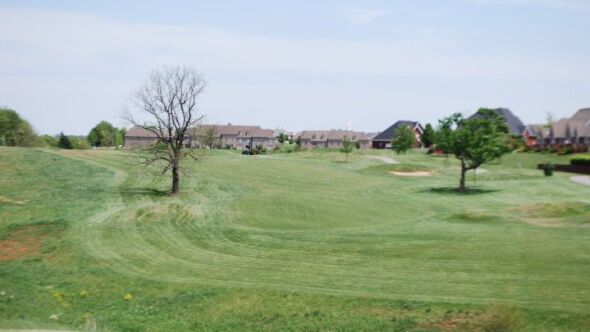 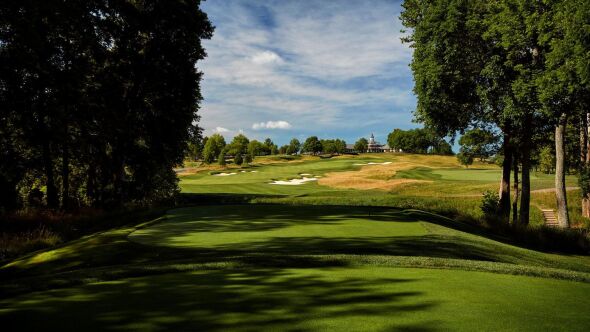 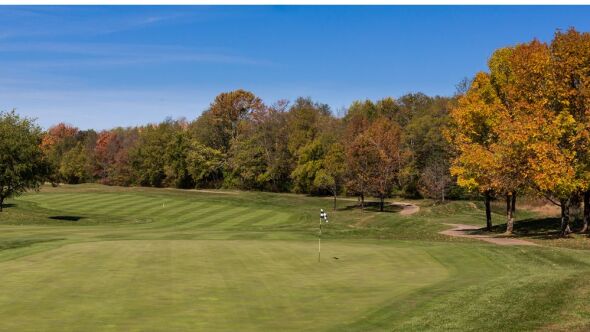 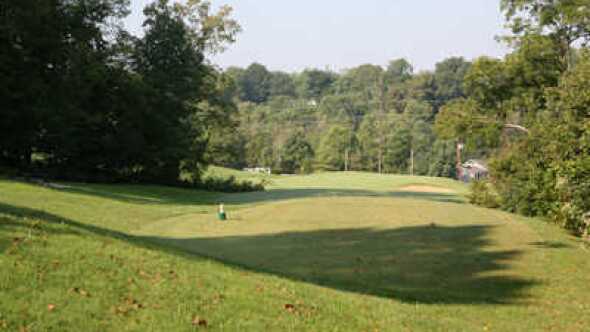 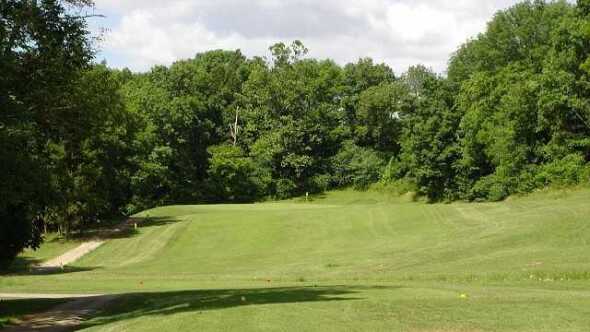 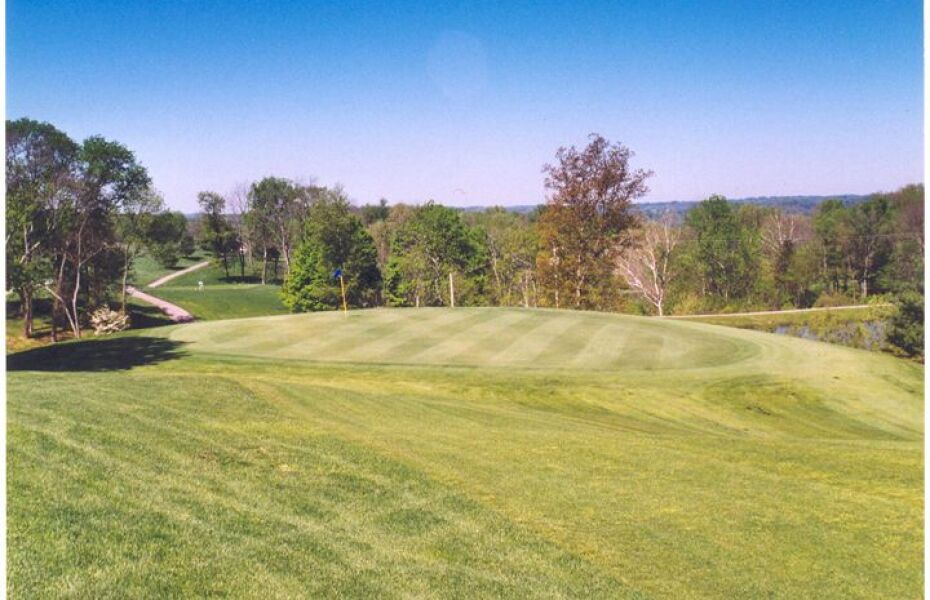 A view of the 17th green at Tanglewood Golf Course 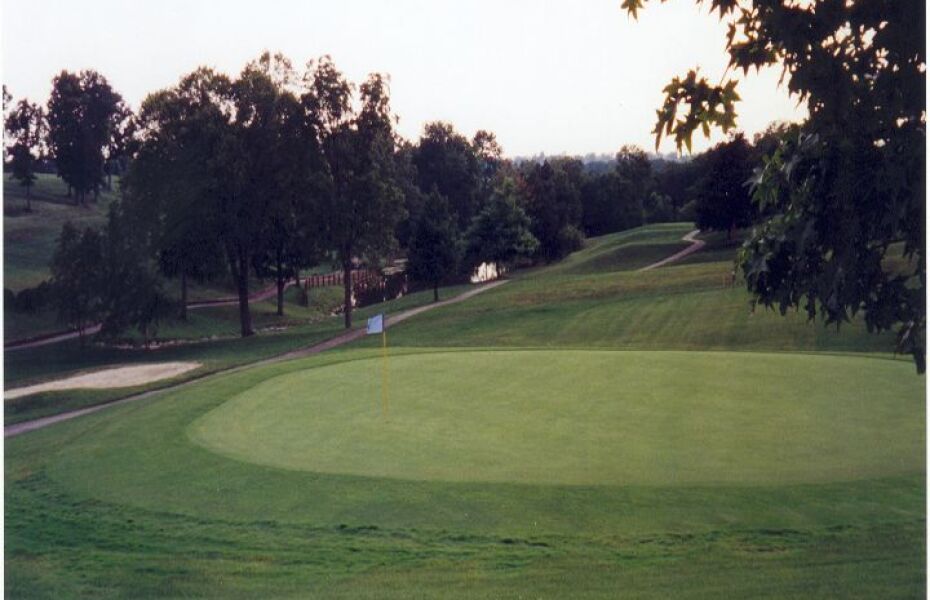 A view of hole #12 at Tanglewood Golf Course 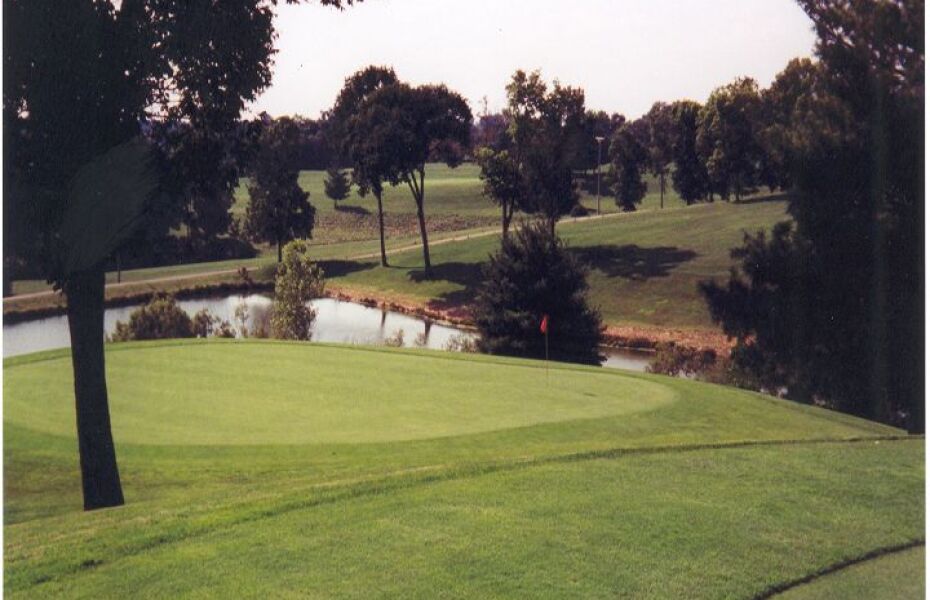 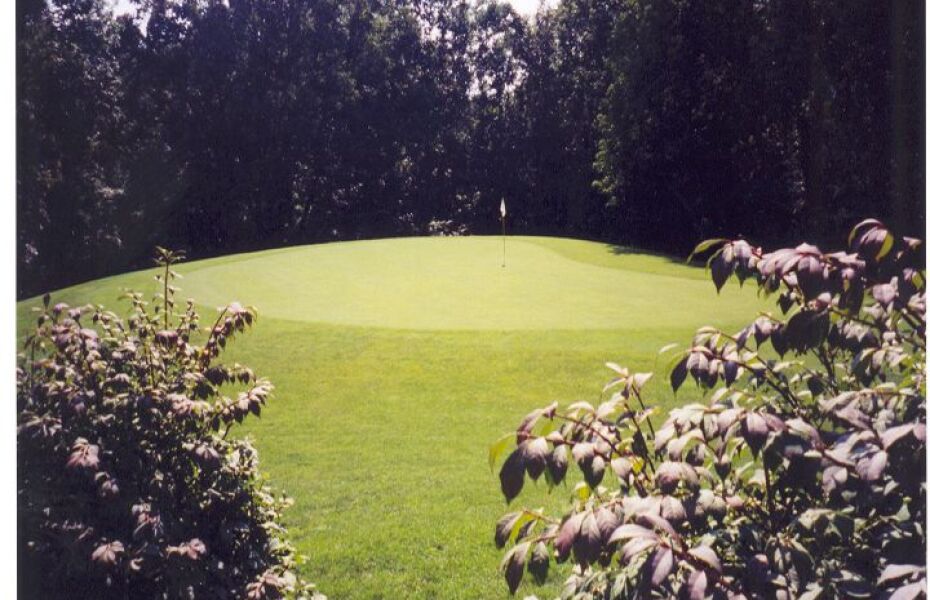