Shattuck has been destroyed

I’ve been playing the Shattuck nearly every year since 1995. It used to be one of the most unique and beautiful courses in the world. The natural setting at the base of Mt. Monadnock, running through forests, and wetlands, each hole unto itself, the course was a masterpiece designed by Brian Silva. It has always been an extremely difficult course, ranked by Golf Digest as one of the top 50 or 60 toughest courses in the US. The difficulty, the challenge, and the hike through nature was the joy of playing the course.

Enter the new owners in 2019, a young founder of a chain of brewpub restaurants. A restaurant owner and beer seller, he clearly he had no knowledge of golf course design or the ethos of the Shattuck, and the result has been catastrophic. He has clear cut trees on many of the holes and the course now looks like a clearcut forest, bare tree stumps everywhere. It appears he is destroying forest to build properties on parts of the site. He has sold some of the lumber to capitalize on the high lumber prices earlier in the year. Many of the wetlands have been drained or cutback, no doubt in an effort to pacify the course and make it easier to play. It has been a wholesale destruction of the nature and the artistry of the course as it was originally intentioned. Heartbreaking to see. Shattuck is not what it once was and never will be again due to cutting down old growth trees. Do not visit, and if you have played the Shattuck in the past, do not expect the same course, it is gone forever.

If you've read my previous review on here or follow me on Twitter you know that I'm not a fan of the Shattuck's extremely difficult and often frustrating design. That said, my most recent round brought out some highlights and reasons for hope that the golfing experience will improve.

I'll start with the course conditions which were a bit of a mixed bag. The greens were the best part of the course. Though there were not fully grown in, putts ran smoothly and relatively quickly for this time of year. The amount of slope in them made for some challenging but fair putts and it as satisfying to make a few long ones.

I was also impressed with the fairways being cut nice and short, not at all shaggy like some other courses I've played recently. That said, there were some uneven lies as not all the grass has grown in there either. It's still early in the season so I would expect it to be noticeably better as the season progresses.

I was able to avoid most of the bunkers on the course (the only hazards I escaped all morning) but they appeared to be well maintained as well. The rough and tee boxes were just ok, again, could end up better as the grass grows more.

I found out after my round that the course is under new management and even before knowing that, it was apparent that improvements to the course are underway. I saw quite a few freshly cut tree stumps. I don't the course well enough to know how much this will help the course's playability but I hope those efforts will continue. There are several areas on either side of fairways that I think could be changed to help wayward shots find their way back to the fairway or at least be findable and hittable.

The staff I encountered were very friendly as were a few members I ran into while playing. I got the sense the members here have embraced the course's high degree of difficulty and found ways to manage the course's many forced carries and penalty areas. For those playing here for the first time, I recommend playing with the least-expensive balls you can find (that you'll be ok with losing) and play up a tee if your driver isn't very accurate.

With the widespread increase in greens fees in the area, I was pleased that a weekday morning round here was a reasonable $39 to walk and the course is a fairly easy walk and extremely pleasant with the scenery.

I look forward to coming back and playing here, words I never thought I'd say given my historical attitude towards this course's design. But I'm willing to keep an open mind that under better management the course will find a way to work its charm on me. It's certainly done the same for many others.

I have been wanting to play this course for a while. Finally got there. I was warned to bring a lot of balls. Lost 6 or 7. Some tight fairways, lots of bends. Only used driver once.

Which tees did you play?

You knew you were in New Hampshire. Beautiful tee boxes, with breathtaking views. Fairways were well-kept and the greens were smooth and fast. Perfect conditions. There were no overlapping or side-by-side fairways. On some holes, you felt like your group was the only group on the course. Pace was very comfortable. Challenging for the good golfer, fun for the new golfer. Even though we had a golf cart, we still put 10,000 steps on the pedometers

Pocket your ego and you can score well here

Very tough when you first play it, but once you know it, you can score real good here. I hit the driver 225 and from the whites, i only hit driver on 5 holes. A challenging and very fun course.

The Shattuck is one of the most unique, picturesque and challenging courses you will ever play and i try to play it 1-2 times a year (more if i lived closer). Carved out of the woods in one of the most incredible settings - it is a thinking man's course where you do not hit driver on every hole. Over all, the course is in good shape. The greens were in good condition, but because of the 95+ heat, they were allowed to grow (and were a little slow), but they should be in fantastic condition for the rest of the summer. One suggestion: bring a range finder or GPS watch. Highly recommended for the serious golfer!

I work at a golf course in Mass. My job as a starter and player assistant on the course is to make players feel welcomed and happy to be there and hopefully return. The staff at Shattuck is a great example of what every course should be.

What a challenging course. Target golf here. Get some crazy bounces. Greens in great shape. Great views. Keep driver in the bag. Shot an 89 for my first time ever playing here. Will be back and will know how to play the course better now.

put away your ego

This course has nice views. You just can't hit a way with your driver. It took me to the 5th hole before I took my driver out. Trust you're line and hit the ball. The staff was very friendly and helpful I would play again when I'm in the area

You can score on this course if you have patience & a decent iron game. My 3 iron got a lot of use off the tee. Hit to the markers when you can and it will save you a few strokes. the greens were a touch slow, but in nice shape.

Unique course in the mountains

I always try to play here once per year. This is my third time and it is always a great experience. It is target golf folks and it is very challenging. There is a reason it was voted as one of the top 50 courses in the country. If you don't want that type of experience, don't play. It is unique with unbelievable views on most holes. If you don't hit the fairways or landing spots on your drives, your ball is most likely gone. Greens are challenging as well and there is plenty of water and marsh on most drives to navigate over. Pro shop attendants are always friendly. Others who complain about this course did not do their homework on what to expect and ended up losing a lot of balls. Enjoy it for what it is or don't go!

The views cannot be beat. Truth be told this is a challenging course, but if you put your ego away and play smart it's a great course! Greens were quick for late season which made it that much more enjoyable. Staff is top notch and even gave me a deal on a Shattuck under armour golf shirt

Beauty and the Beast

After not playing for many years, it was in fine form. Holes 12-14 remind me of Myrtle Beach with the water. A must play for any golfer who is willing to test their game.

Have played course 3 times in last 4-5 weeks and enjoy it more every time. Continued course improvements make it more enjoyable every visit. Greens were quick and true and pace of play was enjoyable. Multiple tee options make it playable for my low handicap and wife's higher one. Hope to play again before seasobs end.

First time playing The Shattuck. I had heard it was difficult but thought playing it late in the season would make it enjoyable and challenging. The Head Pro was very friendly and hooked me up with three other golfers who had played it before. I was told to aim at the pile markers on each hole. The problem was if you missed the pile marker by more than five yards either side your ball was gone. Lost ball! In addition you could not see from the tee where to "miss". Also, probably five or six holes you could not even see the pole marker from the tee. Blind shot after blind shot. It was hit and hope! In addition, the condition of the course was bad. For some reason I thought the course was a special resort type course. It was a mountain course at best with a lot of bad lies in fairways and rough. You couldn't see the fairway from the tee on many holes. Our golf cart had no governor on it so going downhill was dangerous. Cartpaths were a mess. Greens were okay. Sand traps were wet and grainy. Snack bar at turn had some specials which were pretty reasonable but slow. I am a five handicap and lost five golf balls. I can't imagine playing this course in the spring before your swing is in tact. I won't rush back to play here!

This is the friendliest golf course I have ever been to. I work at a golf course and I wish we were this good. The course is very very difficult but not too long. Accuracy is the key. You basically have 2 choices. Fairway or lost ball. Not just kidding. Bring a lot of balls if you are an average golfer. 1 more thing,Dont even think about walking.

Shattuck GC was in great condition when we played and the greens were a bit slow but in pristine shape. This course requires pin point accuracy on almost all your shots from tee to green but if you play to the course markers you will be okay. The views here of Mt. Monadnock are spectacular and there is an abundance of wildlife around to keep things interesting between holes. 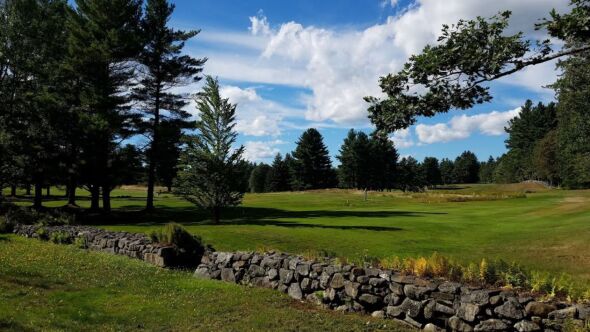 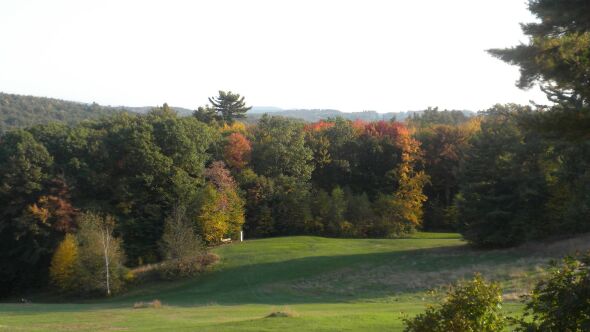 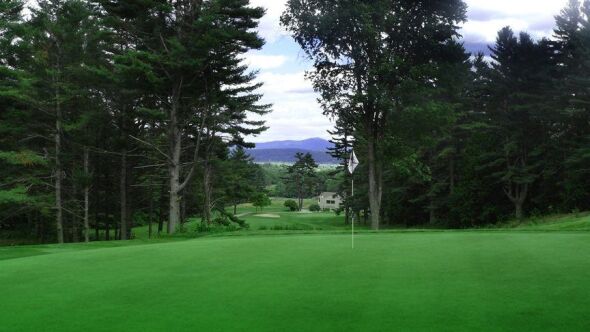 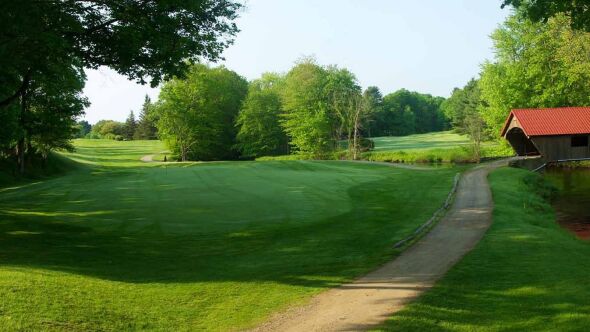 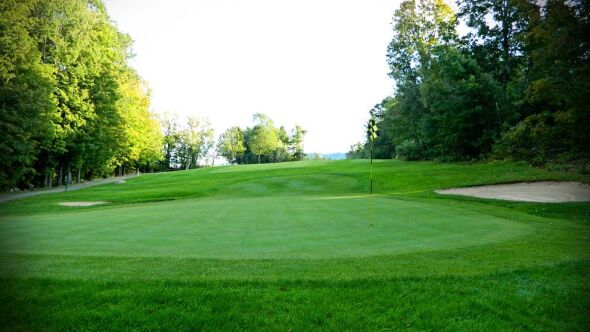 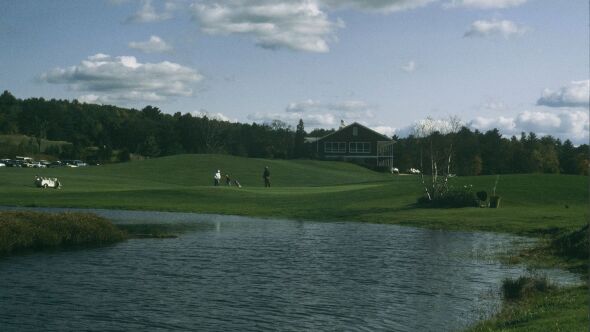 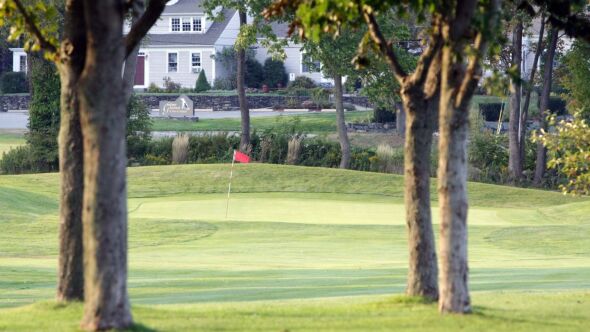 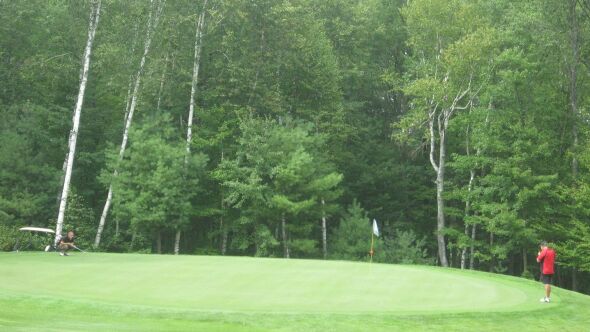 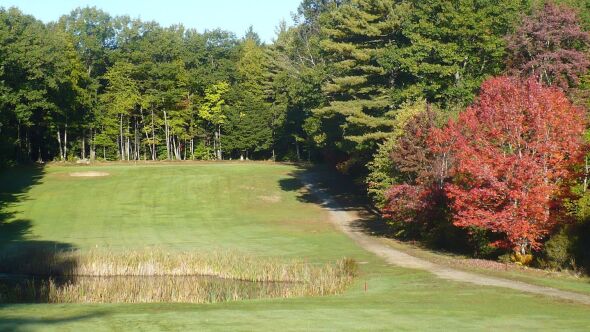 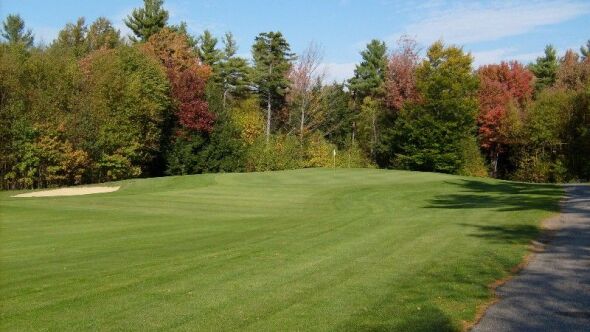 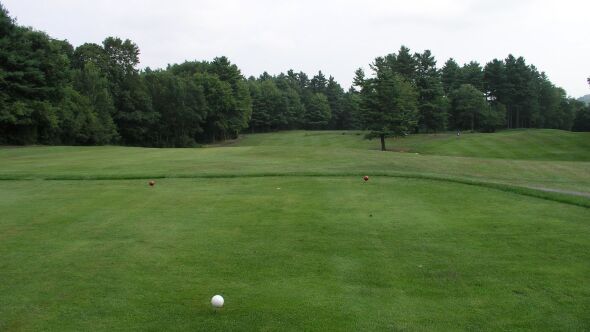 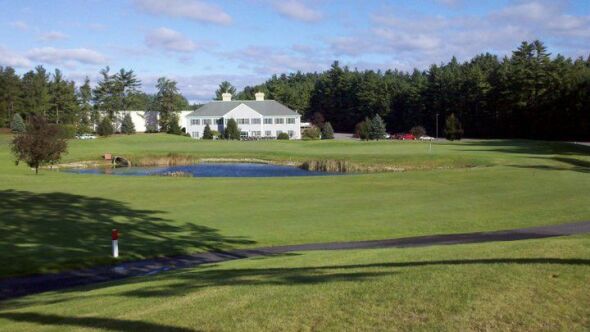 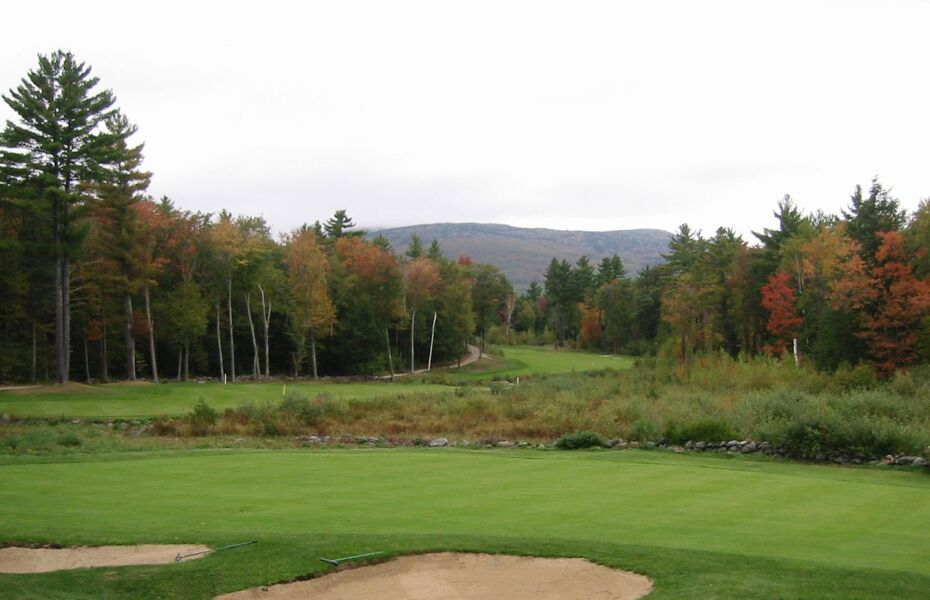 A view of the 6th hole at Shattuck Golf Club 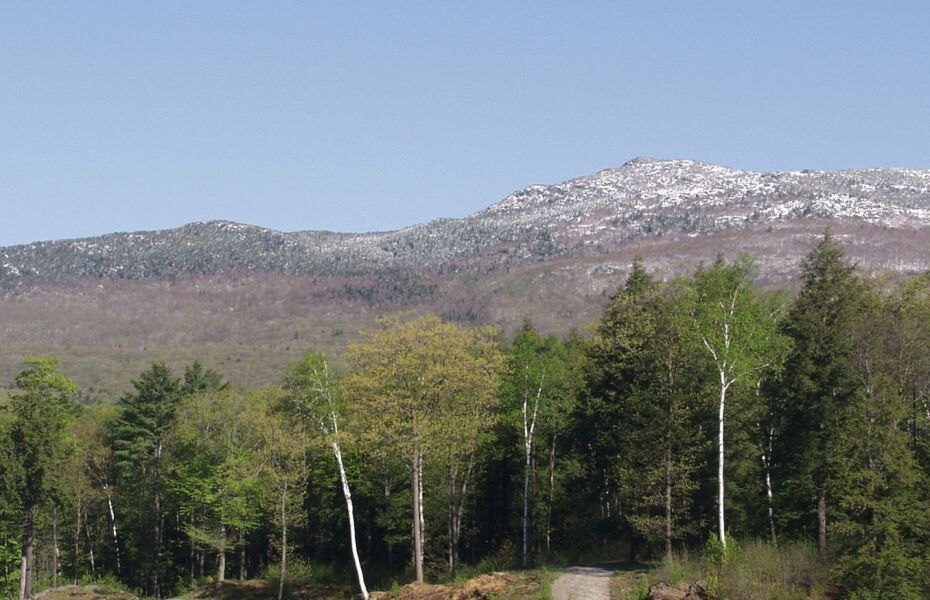 The Shattuck Golf Course - View from the first tee 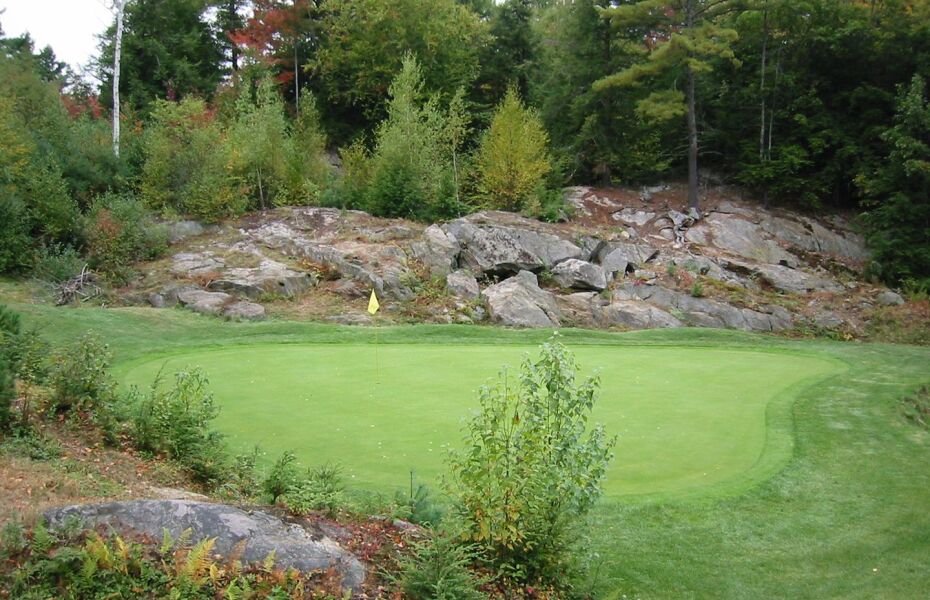