On Tiger Woods, parental strength and the 2021 PNC Championship

Is the key to Tiger's latest comeback walking the fairway with his son?

Most years, the PNC Championship is a light-hearted late-year hit-and-giggle. This year, it took on deeper significance. Not only did Tiger and Charlie Woods teed it up for the second straight year, but Tiger made the 2021 edition his return to competition after a February 23rd car wreck from which he was lucky to escape with his life and two (eventually) functioning legs. And even though tournament golf’s beauty is in its adherence to blunt numeric results, this past weekend was far more meaningful than just a cold set of figures on a scoreboard.

For many of us, golf comes into our lives not as an out-of-the-blue discovery, but as something handed down from prior generations. It’s safe to put Charlie Woods, arguably the most famous 12-year-old in America at present, into the latter camp.

Charlie and his 15-time major champion father may have finished two shots shy of John Daly and John Daly II, but this weekend, Team Woods put on a thrilling, moving show for a sellout on-site crowd and thousands watching on television. They gave us something as rare as a mid-December hurricane: must-watch televised golf.

A solid but unspectacular opening-round 62 in the two-person scramble competition left them three shots back of the lead, forcing them to play nearly flawless team golf on Sunday in order to have a chance to win. And they almost did it, spinning up a mesmerizing streak of 11 straight birdies from holes 7 through 17, derailed on the last only because they got a bit aggressive, knowing they needed an eagle for a chance to force a playoff.

But again, the facts distract from the qualitative triumph of the day. Nearly 10 months ago, in the aftermath of the crash, it was fair to assume that Tiger Woods might never walk again, much less play competitive golf. Golf fans everywhere felt a sense of loss, stripped of the future privilege of seeing the most dominant golfer who has ever lived ply his trade again.

All it takes is one stray thought about Tiger’s children to see the absurd smallness of such regret. Never mind a sports hero, Samantha and Charlie almost lost their father that day. Watching Charlie hit a string of steel-nerved iron shots and clutch putts to contribute to the team effort, I was in awe of the kid’s resilience.

His father’s, too. Could Tiger the Golfer alone have made such progress in the 10 months since the crash? Or did he also need to be Tiger the Parent in order to access an extra-deep sense of will to get close enough to playing shape to tee it up with his son this weekend?

For years, Tiger Woods came across as golf’s version of the Terminator, but does he now think of his son and daughter and access a similar well of determination every time he goes to physical therapy?

Having been a father for six and a half months myself, I feel a thrilling jolt of energy whenever my daughter smiles at me. It makes me feel capable of any feat of protection or self-preservation. If indeed that same type of parental drive has been fueling Tiger, then maybe this latest comeback is inevitable and the secret was walking the fairways with Charlie all along. 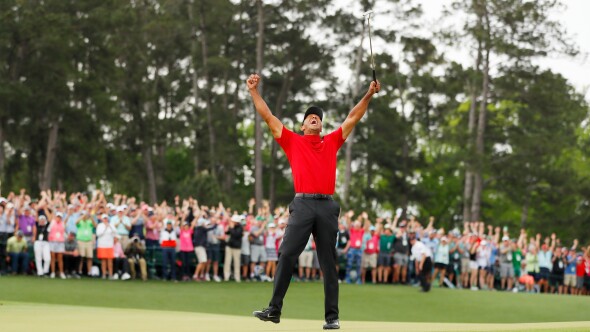 Articles
3 Min Read
Tiger Woods defeats the decades at the 2019 Masters
Golf has come a long way, but Tiger is still the best.