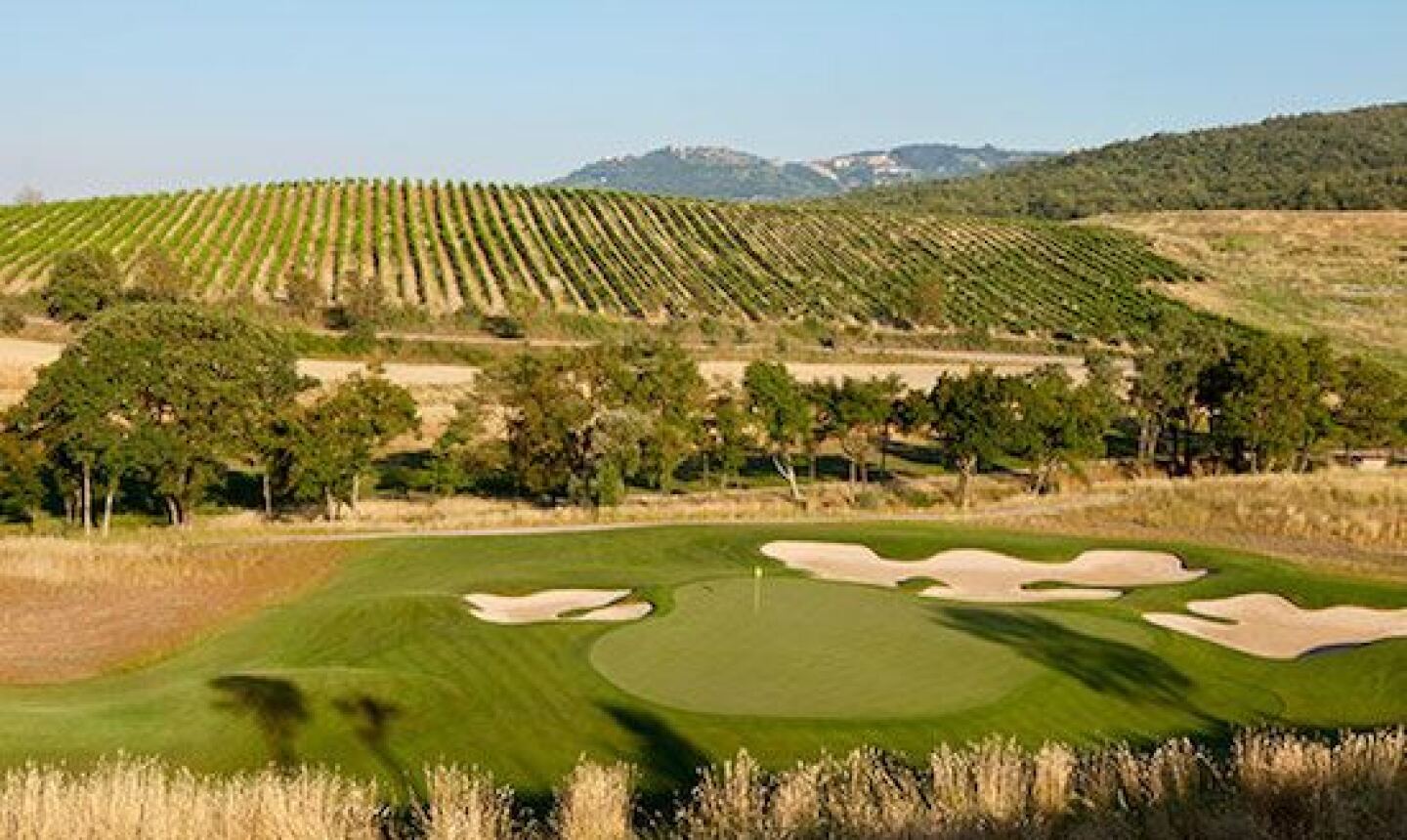 We received a number of responses to last week’s piece on lesser-known American destinations from folks who were dying to know where they could get their wine-and-golf fix outside the United states.

So, we pulled together a group of international destinations where the grapes are as pleasing as the greens.

Wine is made all over the world, as you probably know, so a truly exhaustive list would probably be so long, it’d put you to sleep faster than any tannins we know of.

So here are our choicest five selections from the “wine world” of golf:

We start out close (relatively speaking—only a couple thousand miles away) to GVI headquarters. Most people unfamiliar with America’s neighbor to the north are quick to label Canada as perpetually icy and snowy, perhaps with a brief respite in the middle of summer for some pleasant weather. But there’s more to it than that, especially in British Columbia’s Okanagan Valley, which produces many of the country’s best wines. The southern portion of the valley, in particular, boasts a climate that most reminds of Napa and Sonoma. The best golf course in the area is the Thomas McBroom-designed Tobiano, laid out on some breathtaking land with broad views of the mountains. The town of Oliver is home to the Golden Mile Winery Route, where visitors can sample the offerings of a number of wineries on foot.

One of our favorite resorts in all of Continental Europe happens to be in the heart of Tuscany in the village of Il Borgo. Its Tom Weiskopf-designed golf course is good, not great, but the rest of the resort is, in a word, tremendous. And it should be, as rooms start at €450 per night. For visiting oenophiles, there is no shortage of wineries in the area—too many good ones to name—many of which produce one of Italy’s most delectable wine varieties, the Sangiovese-based Brunello di Montalcino.

Clear on the other side of the planet, this Tom Doak-designed gem features some of the most spectacular cliff-hanging golf you are likely to see anywhere, and is close to some of New Zealand’s many fine wineries (which go particularly well with another New Zealand comestible: lamb). If you explore the surrounding Hawke’s Bay wine country, prepare to sample a lot of reds—Cabernet Sauvignon, Merlot and Syrah are among the area’s most popular varieties, but Chardonnay is also plentiful for fans of whites. The growing wine empire under former pro golfer-cum-analyst Frank Nobilo has an outpost in Hawke’s Bay, and Craggy Range, Mission Estate and Te Mata Estate receive high praise as well.

Another seaside Tom Doak gem, St. Andrews Beach doesn’t have the scenery of Cape Kidnappers, but it has Doak’s classical design sensibilities and sense of fun in spades. The course is situated on Victoria’s Mornington Peninsula, less than 90 minutes from the city of Melbourne, which is home to yet more incredible grounds for Australian golf. Mornington Peninsula is also home to more than two dozen wineries which produce a wide range of grapes, but locals rave most passionately about the area’s Chardonnays and Pinot Noirs.

The thrilling 2003 Presidents Cup played out over Fancourt’s Links course, one of three courses on-site designed by the country’s own golf legend Gary Player. The resort’s Outeniqua and Montagu tracks are worth a play, too. The surrounding region is home to Herold Winery, which grows both white and red grape varieties for its Sauvignon Blanc, Pinot Noir and Cabernet Sauvignon/Shiraz/Merlot “Red Men” blend. Other area wineries include Domein-Doordekraal, Excelsior-Vlatkeplaas and Grundheim Wines.

If you want to combine golf and wine (and gourmet food and sightseeing…) and money is relatively little concern, we recommend one of numerous Kalos Golf Cruises, from New Zealand to Europe to their “Golf Around The World” private jet tour.

We fully recognize there are many other great places to enjoy both wine and golf outside the United States. Be sure to share your favorites in the comments!

To Shankar
When in Barcelona you have to play the two courses at PGA Catalunya (1 hrs drive north of the city), two of the best in Europe.
In Valencia the must play is El Saler.
in the Malaga area you find numerous of outstanding courses like Valderrama, Sotogrande (neighbours) and La Reserva.
In Madrid RSHE Club de Campo and Real Club de la Puerta del Hierro.
Enjoy!

Castiglion del Bosco is (was until recently at least) a highly private course. As a golf journalist it took me two year/two visits before they would let me play the course - and then only under the promise of not writing about it! I have kept my promise, but feel rather certain that the Ferragamo family will have to open up for public play within short.
When it does, go play and enjoy this fantastic area with all it has to offer of good wines, delicate food , superb scenery and excellent accomodations.

We are vacationing in Barcelona, Valencia, Malaga &amp; Madrid in late Devcember. We would apprecaite your suggestions of some good courses in this area for a couple of rounds of golf. Cheers, Shankar

Argentina offers excelent wines and golf courses at a fraction the prices you pay in the rest of the world. In Buenos Aires, i.e. there are more than 50 first class courses for less than 30 bucks a round and really amazing wines for 10. The main vinery area is in Mendoza, in the west of the country, but Buenos Aires is a much interesting city and you can enjoy all of the good wines, and also excelent beef. Córdoba and Mar del Plata are very nice golf destinations too.
Argentina is currently, value per money, the best golf and wine (and beef) destination in the world. By far.

Dear Friends
The Golf du Médoc Hôtel &amp; Spa http://golfdumedocresort.com
where superb golf and fine wine combine in the best of taste
Every golfer wants to make his or her pilgrimage to Scotland or Ireland and wine enthusiasts feel the same about France. For the greater delight of golfers and oenophiles, the Bordeaux Médoc region has now emerged as the ideal place to enjoy the best of both, and the Golf du Médoc Hôtel &amp; Spa has put together tailored packages at excellent prices which make this experience simple and seamless.

Fancourt (George) in South Africa is not renowned for its vineyards and wine in South Africa! The vineyards you mention are at least another hours drive away and beyond the mountains more inland. The Links at Fancourt is a fantastic course but tough! Would be more appreciated by single figure golfers ....or if you have unlimited supply of balls!! The Outeniqua and Montugu courses much more playable!
If you want to combine good wine and golf .....visit Paarl and Stellenbosch area! It is within 30 minutes from Cape Town International airport and most courses are surrounded by the vineyards and estates that cater fr the visitor! Golf courses include Pearl Valley (Jack Nicklaus designed and host of recent SA opens) and Erinvale, De Zalze and Stellenbosch GC. The wine varieties are much more varied in these areas and you would get a much better "taste" of South Africans wines here.

Tobiano is a couple of hours from the main wine producing region of the Okanagan Valley it is a tremendous golf course. Located at the Northern end of the Okanagan Valley are two outstanding courses - Predator Ridge, particularily the Ridge Course and Tower Ranch. Fairview Mountain is also a very good course with amazing views and is located in the southern end of the Okanagan Valley in the most concentrated region for wine in the Valley. Another outstanding course that is closer to Tobiano is Sagebrush. Finally in, about an hour and a half south of Fairview Mountain is located is the new Washington State course Gamble Sands designed by David Mclay Kidd of Bandon Dunes fame. I have had a great year for golf travel and played 8 of the top 100 courses in the world this year alone and I would not hesitate to say that any of the course listed above stood with anything I played abroad.

I don't know where you get your info, but your Golf and Wineries suggestion of Tobiano and the Golden Mile are way off base; Tobiano is at least a 21/2 to 3 hour drive from that area (and really isn't part of the Okanagan Valley. However, there are several great courses in the Oliver area, including Osoyoos (36 holes), In-ka-meep and the best of them, Fairview Mountain. There are at least 25-30 wineries within a half hour of these courses, and plenty of accommodation in the area.

Another great Canadian wine &amp; golf destination would be Niagara Falls. Dozens of great wineries and almost as many great golf courses not to mention great theater at the Shaw Festival, the shops, restaurants and great accommodations of Niagara on the Lake and oh yeah that little picturesque waterfall too.

Kira K. Dixon
Lifestyle Correspondent
Now Reading
5 Great International Destinations for Golf and Wine
New Cookie Policy
WE AND OUR PARTNERS USE COOKIES ON THIS SITE TO IMPROVE OUR SERVICE, PERFORM ANALYTICS, PERSONALIZE ADVERTISING, MEASURE ADVERTISING PERFORMANCE, AND REMEMBER WEBSITE PREFERENCES. BY USING THE SITE, YOU CONSENT TO THESE COOKIES. FOR MORE INFORMATION ON COOKIES INCLUDING HOW TO MANAGE YOUR CONSENT VISIT OUR COOKIE POLICY.
CONTINUE
Search Near Me