Ace! A guide to the proper etiquette after landing that magical hole-in-one 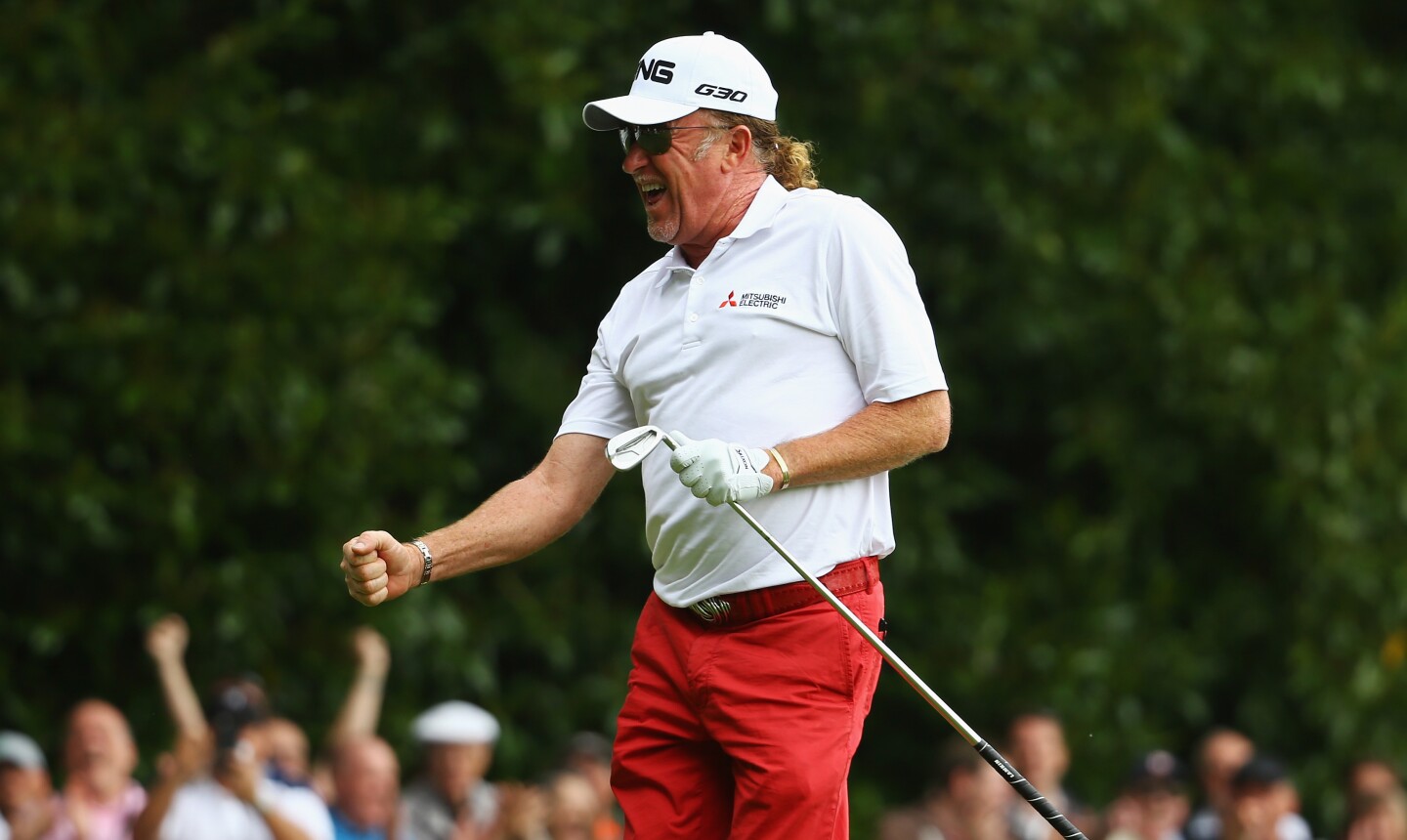 Miguel Angel Jimenez celebrates his hole-in-one on no. 2 at Wentworth during the 2015 BMW PGA Championship. Photo by Richard Heathcote/Getty Images 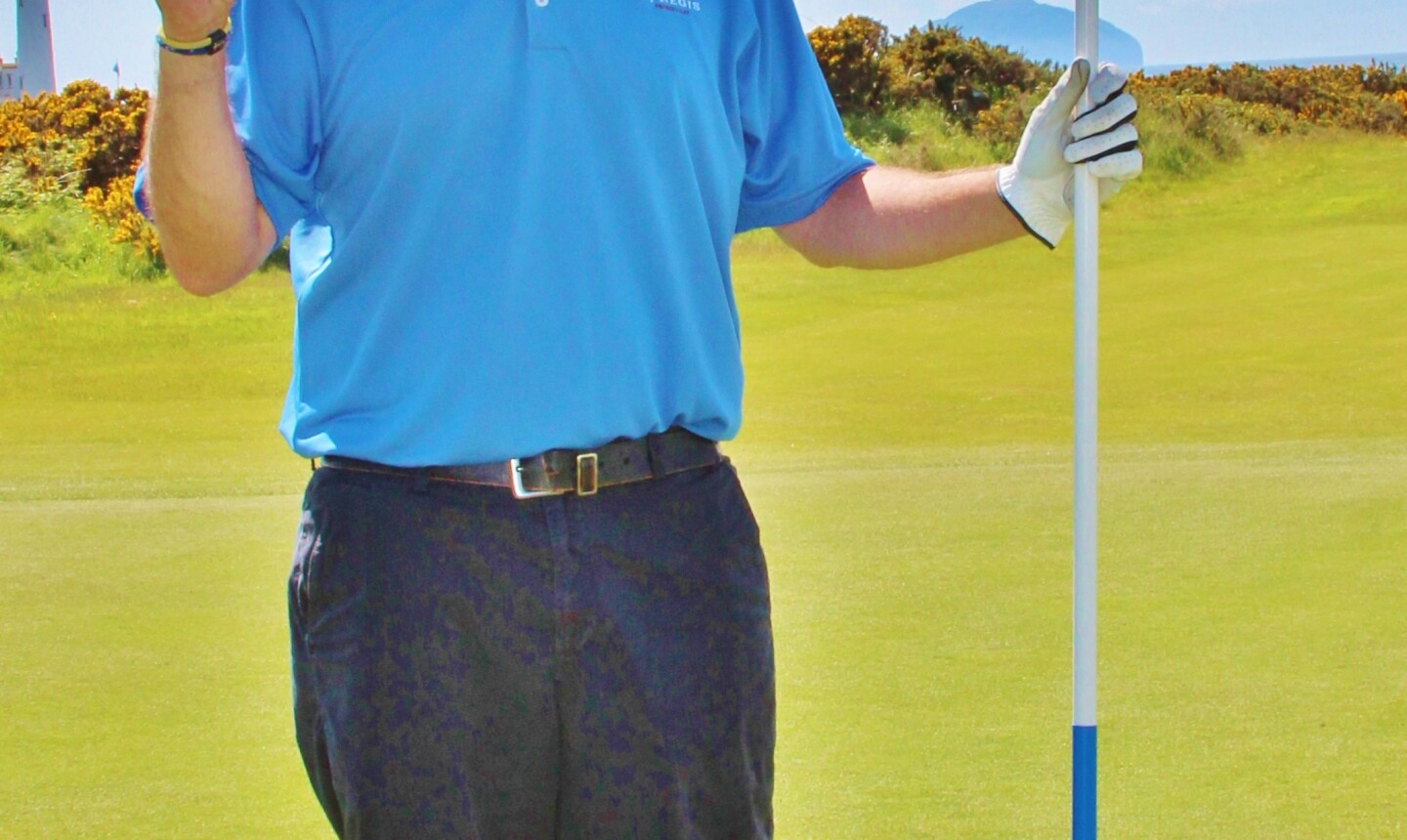 Jason Scott Deegan is blessed that his hole-in-one photo from the 11th hole on Turnberry's Ailsa Course includes both the famed lighthouse and Ailsa Craig in the background. Courtesy of witness Mike Hiller

How should you behave after sinking golf's ultimate shot?

Rich Beem exhibited genuine joy when he climbed on and kissed that red Nisson Altima after his car-winning ace on no. 14 at Riviera Country Club in 2007. Tiger Woods famously fist-pumped and "raised the roof" as the crowd went bonkers on the 16th hole at the 1997 Phoenix Open. Rickie Fowler celebrated a walk-off ace during the 2015 Quicken Loans National by buying a cooler full of beers for the media covering the tournament.

For those of us less talented non-millionaires, the rules and etiquette surrounding a hole-in-one can be a bit more troublesome to figure out. How do I behave? To whom do I owe drinks? How do I make my hole-in-one official? If you follow the five basic steps listed below, your hole-in-one will turn out to be what it was intended -- a memory of a lifetime. Mine certainly were.

I had the opportunity to skip out on buying drinks after my first hole-in-one in 2009, but I didn't dare forsake one of golf's most sacred, unwritten rules. I was on a media trip to northern Michigan when the shot from my pitching wedge took two bounces and dove into the 12th hole at The Gailes, a top-100-caliber public course at Lakewood Shores Golf Resort in Oscoda. All the meals and drinks that night were being bought by a host. I paid for the first round anyway. I didn't want to risk any ill will from the golf gods.

It was the best $100 investment I've made. I hit my dream shot four years later -- a 151-yard 8 iron that found the cup on the 11th hole of the Ailsa Course at Turnberry in Scotland. If I had broken from tradition at The Gailes, would I still have gotten such a fortunate bounce at Turnberry? I don't think so. I'm a big believer in karma.

I'm not an overly exuberant guy, so I didn't really yell or get too crazy after my aces. A few high-fives. Maybe a club flip.

But if you can't help yourself, go ahead and let out a holler. Jump around. As long as the celebration doesn't get obnoxiously loud or long, I say go for it. Don't forget to take a cell phone photo of the hole or one with you on the tee to capture the emotion of the moment. Just don't linger so long that it affects pace of play.

When you get to the green, more pictures are in order. Take one of the ball in the hole. Have a playing partner take a video of you plucking the ball from the cup. That's the money-shot for your Facebook or Instagram accounts. Pose with the ball and the flag stick, too. You can never have too many photos. What you will regret is if the only one you take turns out blurry.

The next step is important: Put the ball away for safe keeping. In your bag. In your pocket. Whatever. I once interviewed a beginning golfer who drowned her hole-in-one ball in a pond later in the round. Don't make that mistake.

The round has more serious implications once you land an ace. It's time to refocus. I know how hard that can be. I've followed up both of my aces with double bogeys. There's nothing worse than seeing a 6 following a 1 on the score card. I was too jacked up on adrenaline to put a good swing on the ball. You can do better. Finish strong. Any ace increases your chances of a career-low score for nine or 18 holes.

The hole-in-one becomes official once you finish at least nine holes, although a full 18 is ideal. If that means waiting out a lightning storm or playing in a monsoon, so be it. And, yes, a hole-in-one on a par-3 course is considered legit. Sign your scorecard once you're finished, and have your playing partners do the same. Report your accomplishment to the pro shop. Some courses give out a special prize or will put your name in the club newsletter, on the Web site or even on a plaque hanging in the clubhouse. Turnberry printed up a nice certificate for me as a keepsake.

Buying drinks at the bar

Here's where things get tricky: Many golfers subscribe to the theory that you should buy a drink (or, even scarier, open a tab) for everybody in the bar after your round. I don't have a problem with people among the more frugal fraternity of golfers who believe that buying a round for your foursome or your group of friends at the course that day is the only obligation.

That allows for good, clean fun to relive the moment without the pressure of worrying about the cost. If you're feeling more generous, buy extra rounds for your buddies or include one round for everybody in the bar.

If you belong to a private club or a large group (such as a weekly men's club at a public course) where the tradition essentially requires buying a round for everybody, then maybe it's time to consider investing in some sort of hole-in-one insurance that will help pay for the party. Some private clubs include this type of insurance as part of a member's monthly dues. Ask the golf staff or person running your golf league for specifics. I've read about some that cost as much as $10 a month and others as little as a $4 one-time fee.

If you're a guest at one of these places, it might be wise to aim away from the hole. The insurance policy of the member host won't cover your miracle swing. Expensive liquors at the bar can push the bill upwards of $300 to $400. If it's your first hole-in-one, maybe you're willing to pay that kind of cash to finally get the monkey off your back. As much as I love the thrill of an ace, I'd rather not. I've already paid my dues a couple of times, thank you.

There are a handful of organizations that want to hear about your hole-in-one. A simple Google search came up with Web sites such as usgolfregister.org, holeinone.com, holeinonesociety.com, the Golf Digest Hole-in-One club (gdacers.com) and nationalholeinoneregistry.com.

Most sites will register you for free and then try to upsell ways to showcase your prized ball. I've got my first ball -- signed by my playing partners with the date, yardage and club used written on it -- framed in a funny trophy shaped like the number 1. I don't know where my dad got it. I stepped it up after my second hole-in-one. I ordered a personalized framed portrait of the 10th and 11th holes at Turnberry from Stonehouse Golf (stonehousegolf.com). It's a classy piece of golf art that hangs in my office. Less expensive options can be found at holeinonetrophies.com or greatgolfmemories.com.

It's also a good idea to call your local paper to report it. Most sports writers who cover golf will include a sentence or two about your ace in their column. The course will love the exposure, and your friends will be surprised to learn a bad golfer hit such a great shot. During my newspaper days, I wrote about a 5-year-old who made a hole-in-one and another golfer who sank multiple aces on the same hole in a short period of time.

Here's my biggest pet peeve -- braggarts after the fact. To be honest, if I've just met you, I don't want to hear your hole-in-one story. I'm sure you can live without listening to mine. I never talk about hole-in-ones unless I'm asked. (Editor's Note: Yeah, right!)

I'd rather talk about my "mulligan" ace -- now that's a good yarn -- or the time I witnessed a bladed missile by a playing partner crawl down the flagstick into the hole. My favorite tale is the cart girl who aced an island green during her first-ever round of golf. She broke every unwritten hole-in-one rule in the book. To me, she symbolizes golf's most elusive shot. Most aces are just dumb luck, plain and simple.

If you've been lucky enough to get an ace, let us know how you celebrated and if you captured the moment, tag us with the photo or video on Instagram with #GaBestPhoto.

Jason Scott Deegan
Jason Scott Deegan has reviewed more than 1,000 courses and golf destinations for some of the industry's biggest publications. His work has been honored by the Golf Writer's Association of America and the Michigan Press Association. Follow him on Instagram at @jasondeegangolfadvisor and Twitter at @WorldGolfer.
5 Comments

Made my 1st hole in one January 19 2018, playing with our Big 8 group of guys at Sandia Golf Club in Albuquerque New Mexico. Bought several rounds for the Big 8 group and also paid for the few people sitting in the club house. A moment I will remember forever.

Made hole in one playing by myself. Witnessed by my parents in heaven.

Is there a rating or a standard by which golf courses must adhere to qualify as legitimate site for a hole in one?

great article . . . just some extra information when Hole in one Insurance is applied their will always be additional rules and conditions via the contract . . .  ( providing a valid payment prior to the start of the event , you may be surprised as too how many people forget that!! yardage requirements and some others ) and a validation process to ensue to read more go to http://www.hole-in-won.com/Hole_in_One_Etiquette.htmlBEFORE it is considered "official" by the company providing the service

I've had two aces.  For the 2nd one, I opened a tab for my golf league that night.  The first ace was in a tournament but the course didn't have a Sunday liquor license, so I was off the hook for buying all that booze.  That was a pretty funny aspect of it.

Kira K. Dixon
Lifestyle Correspondent
Now Reading
Ace! A guide to the proper etiquette after landing that magical hole-in-one
New Cookie Policy
WE AND OUR PARTNERS USE COOKIES ON THIS SITE TO IMPROVE OUR SERVICE, PERFORM ANALYTICS, PERSONALIZE ADVERTISING, MEASURE ADVERTISING PERFORMANCE, AND REMEMBER WEBSITE PREFERENCES. BY USING THE SITE, YOU CONSENT TO THESE COOKIES. FOR MORE INFORMATION ON COOKIES INCLUDING HOW TO MANAGE YOUR CONSENT VISIT OUR COOKIE POLICY.
CONTINUE
Search Near Me