Four aces can't be beat; the best hole-in-one story ever

But what happened recently at Pine Hills Country Club in Sheboygan, Wisconsin, defies all odds. In fact, there's probably no way of calculating what happened there, and if they hadn't documented it, we probably wouldn't believe it. At the end of the day -- which included a golf outing and shootout – four players made aces at Pine Hills Country Club, and the last one to do it became a million dollars richer. The circumstances, though, surrounding this incredible feat, can only be described as fate, or perhaps for the more skeptical, an incredible coincidence.

"I've been in the golf business for 40 years," said Pine Hills' longtime head pro, John Wallrich, "and I've never heard of or certainly seen anything like this."

All aces at Pine Hills 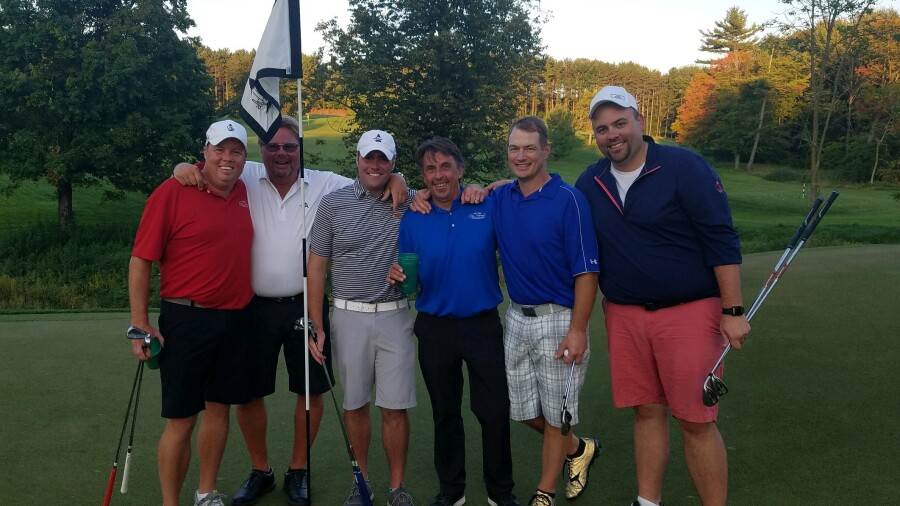 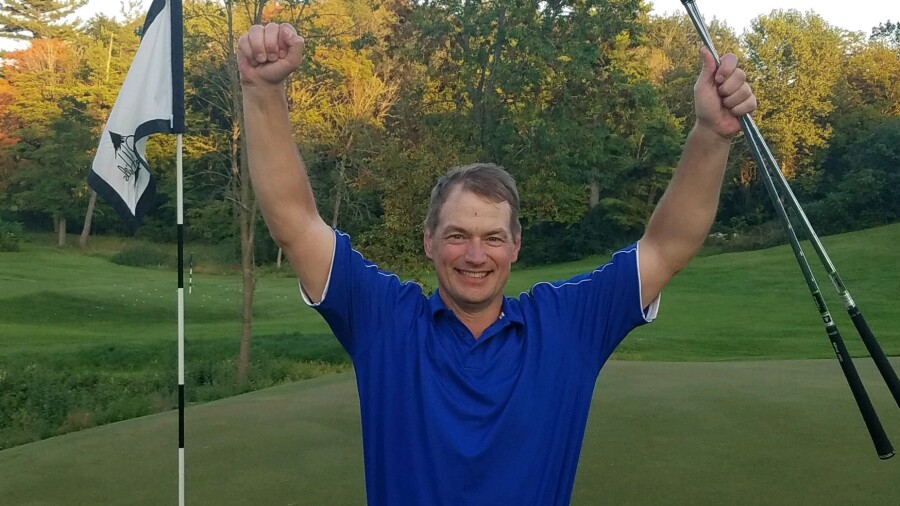 Oral surgeon Ted Anderson made a hole-in-one on Sept. 13 at Pine Hills CC in Wisconsin to win $1 million. Courtesy of Pine Hills CC

The sequence of events begins with something Pine Hills calls its "Hole-In-One Club." There's one for the men and women members of the club, which is located about an hour due north of Milwaukee near the famous Destination Kohler resort and Whistling Straits Golf Club. The idea of the club is that members who choose to be a part of the it and record an ace are rewarded with a golf outing, party and dinner. In July, that honor went to Reed Schmitt, who made an ace. Oddly enough, he actually won $5,000 a few years ago for another ace during an outing at Pine Hills.

But instead of just taking the regular special treatment for his feat this past July, Schmitt, a longtime member who owns a local construction company, decided to do something special. In addition to the outing, which he pushed back to Sept. 13, he contacted a Hole-in-One International and paid for the insurance for a hole-in-one shootout that could pay $1 million for a lucky golfer in the outing. The five golfers who were closest to the pin on the five par 3s at Pine Hills earlier in the day would qualify for the shootout. What happened during the outing and the shootout will never be forgotten at Pine Hills, and because of video taken at the event, can be relived over and over again.

An incredible day at Pine Hills

The first par 3 at Pine Hills is the fifth hole, which was playing 188 yards. It was one of the first holes of the day for Ted Anderson's group. When Anderson, a 50-year-old oral surgeon, hit his shot about five feet from the hole, he put his name on the card at the green, but figured with dozens of groups still to play the hole, it probably wouldn't hold up.

As the day went on, Anderson's feeling that golfers would be sticking the ball close on the par 3s was certainly validated. In his own group, Anderson witnessed Jon Rindt ace the 14th hole. That came after members Dan Olson made a one on the 16th and Keith Robel holed out his tee shot on the ninth.

In fact, according to a story on Wisconsingolf.com, Robel saw that Rindt had hit it to five inches on the ninth. Robel texted his buddy right away and said, "Jon, nice shot, but I beat you by five inches."

So when the round ended, the stage was set. Five players, three of them with aces, qualified for the shootout. That's incredible as is, but what came next is the topper. The pro, Wallrich, who was running the shootout, decided the players should go in order of the holes, so Anderson went first.

For the shootout, the rules required the players to hit from the back tees on the ninth. Anderson wasn't nervous. He said he was too busy congratulating the players who had already made aces.

He employed a 6-iron, one of his favorite clubs from 167 yards. It was a good strike; the ball headed right at the pin. About 100 people around the green started to cheer as the ball hit the green. As it rolled toward the hole, the roar from the crowd grew. Then it disappeared and everyone went nuts.

The 10 guys on the tee then mauled Anderson. Fortunately, the former college wrestler knew how to fall without hurting himself.

Putting it all in perspective

It took a while for everything to sink in for Anderson, a 7.1 handicap who ironically recorded his only other lifetime ace on the ninth hole a dozen years earlier.

"A lot of things had to come together for this to happen," said Anderson, who reserved special credit for Schmitt for going above and beyond to celebrate his ace earlier this summer.

Winning a million bucks is certainly a big deal, but Anderson hasn't even thought about what he will do with the money, which will likely be paid out in smaller increments over a number of years. The memories and sharing this experience with his friends is what stands out for him. Best of all, it's all on video. It can be relived over and over again.

"Money comes and goes," he said. "This is one special memory."

In case you were wondering, the other four players in the shootout still had a chance to win as well. They all hit their shots, none went in, but it's a day they will certainly never forget.

Reminds me of this story from a couple years ago

Husband and wife both made a hole in one on the same 9.

On Saturday, April 11, 2015, my wife and I were playing in a Couples Member Guest at Summit Rock in Horseshoe Bay, Texas. The format was a scramble and a shotgun start. Our foursome started on hole 11. When we came around to the par 3, 3rd hole, my wife, Fran, made a Hole In One. It was a great celebration and lots of fun playing the remaining seven holes.

On Monday, April 13, Fran was playing at Slick Rock in Horseshoe Bay and she aced the 8th hole for her second ace, two days and 16 holes apart. We both now have three each.

As a past member of Old Hunstanton Golf Club in UK I can report on a feat that possibly beats the 67 million to 1 record.
It happened at the par 3, 16th hole in a competition when the same player got 3 "Aces" in the same competition in three successive rounds. There is a plaque at the 16th tee commemorating this feat.
If you give me an email address, I can send you a picture of the plaque. My address is cbb410@gmail.com

I have a friend who is a oral surgeon retired. We were playing at his club back in the 19 seventies. He hit a 2 iron on a 200 yd. Par 3 that went left out of bounds, where their were big boulders and disappeared. He was ready to tee up again when the ball came out on to the green in to the hole. First hole in one from out of bounds. Both being oral surgeons reminded me of this hole in one.

Here is a hole in one story that matches the events at Pine Hills but it is also the most striking example of the ups and downs that us golfers experience whilst playing this wonderful game.

Ali Gibb was the 2017 ladies club champion at Croham Hurst GC in South Croydon near London. She plays off 6. She was playing in the club champs over 36 holes on 14 Aug this year.

She mulls the events over lunch then she starts the second round with a QUAD bogey 8 on 1 and a double bogey 6 on No 2! Then back to the 5th and a REPEAT hole in 1!
Normality returns for a few holes then a triple bogey 8 on the 10th.
She stands on the 11th tee, a hole she had a double bogey 5 at in the morning. She swings and makes ANOTHER hole in 1 her THIRD of the day.
And that was enough excitement for the day - bogies and pars to finish
During the course of the two rounds she had every score from 1 through 9 except 7. She retained her title with a 36 hole total of 163 describing it as a very strange day.

I loved the quote from her club pro. "You've had more holes in one in 5 hours than I have had in my entire career!"

After having a hole in one at the 13th and 15th hole at Green Haworth Golf Club in Accrington, Lancs I still think it takes some beating.

Chiming in here. I had an unusual experience about 15 years ago. Was playing in my dad's senior golf outing in Indiana, one group behind his. On #14, he eagled the par 4. One group later, I did the same. Not sure in how many million that has occurred but it sure was fun.

I have been involved in a multiple hole-in-one group. On May 5th, 2006 I was playing in a foursome when a member of my group made an ace on the 150 yard second hole. There were a bunch of high fives and everyone was excited that he would be buying the drinks after our round. We played on. When we reached the 6th hole, a 214 yard par 3 I had the honor and I aced the 6th hole. The group, including myself, could hardly believe what had just happened. There was quite a celebration but the best part was I could split the drink bill after the round.

That's a good story, Jim. Like the part about splitting the tab!