Another dry winter could put every golf course in the state on water restrictions next year.

Twice a week, Sean Tully sends a drone high above The Meadow Club in Fairfax, Calif.

Not for fun. Not for pretty Instagram photos. He's monitoring where his treasured Dr. Alister MacKenzie-designed golf course might need what little water he can give as the course's superintendent.

Summer is the time of year when fairways throughout California get a little crispy. With drought-like conditions returning after a dry winter, mandatory water restrictions in northern California are making things worse. Marin County, where Meadow Club is located, originally slapped Tully with a mandate to only water tees and greens in early June. He applied, and received, a variance that allows him to water where he wants, when he wants, as long as he cuts usage by 40 percent.

"As a whole, the course is playing well," Tully said. "We are managing as best we can. The fairways are quite dry. Balls are rolling out 40 to 60 yards extra. Members don’t need a new driver at Meadow Club this summer."

Cracking a joke is better than cracking under the stress of the situation. Not only does he need to educate members about California's water issues, he's working hard to inform the general public that golf courses are not the water gobblers they're made out to be. So far, only courses in certain counties in Northern California, like Santa Clara in Silicon Valley and Marin near wine country, are facing water restrictions. Next year, it could be everybody.

The California drought's impact on golf

A historic rain year in 2017 helped California emerge from an extended drought that reached a zenith in 2014-16. Now, academic types are wondering if 2021 isn't just part of a mega-drought cycle. The southern half of the state will escape restrictions this year thanks to a larger reservoir supply than NoCal, but that grace period won't last.

Craig Kessler, the government affairs officer for the Southern California Golf Association, says that if the state isn't bailed out by a wet winter, every course will be in trouble for the foreseeable future.

"California has become a land of permanent drought," he said. "The occasional robust years (of rain) are the anomaly. … Our records only go back 140 years. California grew at a time that we now know was a wet and stable, benign weather period. The scientists tell us we have had much longer periods of drought in our history. We built an entire infrastructure when we assumed the weather patterns were permanent. They are not."

A lack of water, and the rising cost of attaining it, was at least partially to blame for the closures of courses like Rancho San Marcos in Santa Barbara and Roddy Ranch in Antioch in recent years. Water costs will continue to rise as resources become scarce. Those expenses are passed on to golfers. Kessler believes the pandemic golf boom has given courses a cushion against higher costs ... for now.

"Very few golf courses went out of business because of water sources," he said. "The golf industry is resourceful."

Course owners and operators throughout the state have spent hundreds of thousands of dollars to reduce water use over the past decade or so. Some have taken out turf and turned it into natural vegetation that doesn't require maintenance, while others have upgraded their irrigation systems to control how every drop of water is used. Pasatiempo in Santa Cruz went to the extreme, spending $9 million in 2017 to build a state-of-the-art wastewater treatment plant next to the 13th green that reuses recycled water from nearby Scotts Valley.

Brian Boyer, the superintendent at Cinnabar Hills, a 27-hole public facility in south San Jose, said the situation is worse today that in was 6-7 years ago.

Boyer said he has turned down 190 sprinkler heads on the outer edges of play. He's doing his best to look at the bright side. "At least the fairways will be more defined," he said.

He tries not to worry about Mother Nature, but he knows the toughest days are ahead. It's only going to get hotter and drier in summer. Tully has resorted to using kelp products and Turf Screen - a sort of sunscreen for grass - to fight against evaporation and protect the browning of fairways at Meadow Club.

"August for a golf course super in California is a tough month," Boyer admits. "It is where we earn our money. We will get through it. We are just waiting for September when nights get into the 50s and the 40s would be every better."

He knows better than to expect any sort of substantial rainfall. It's not coming until October ... if at all.

"It's going to be an interesting future for golf out West." 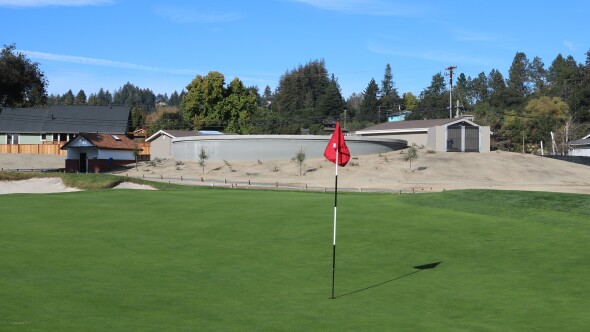