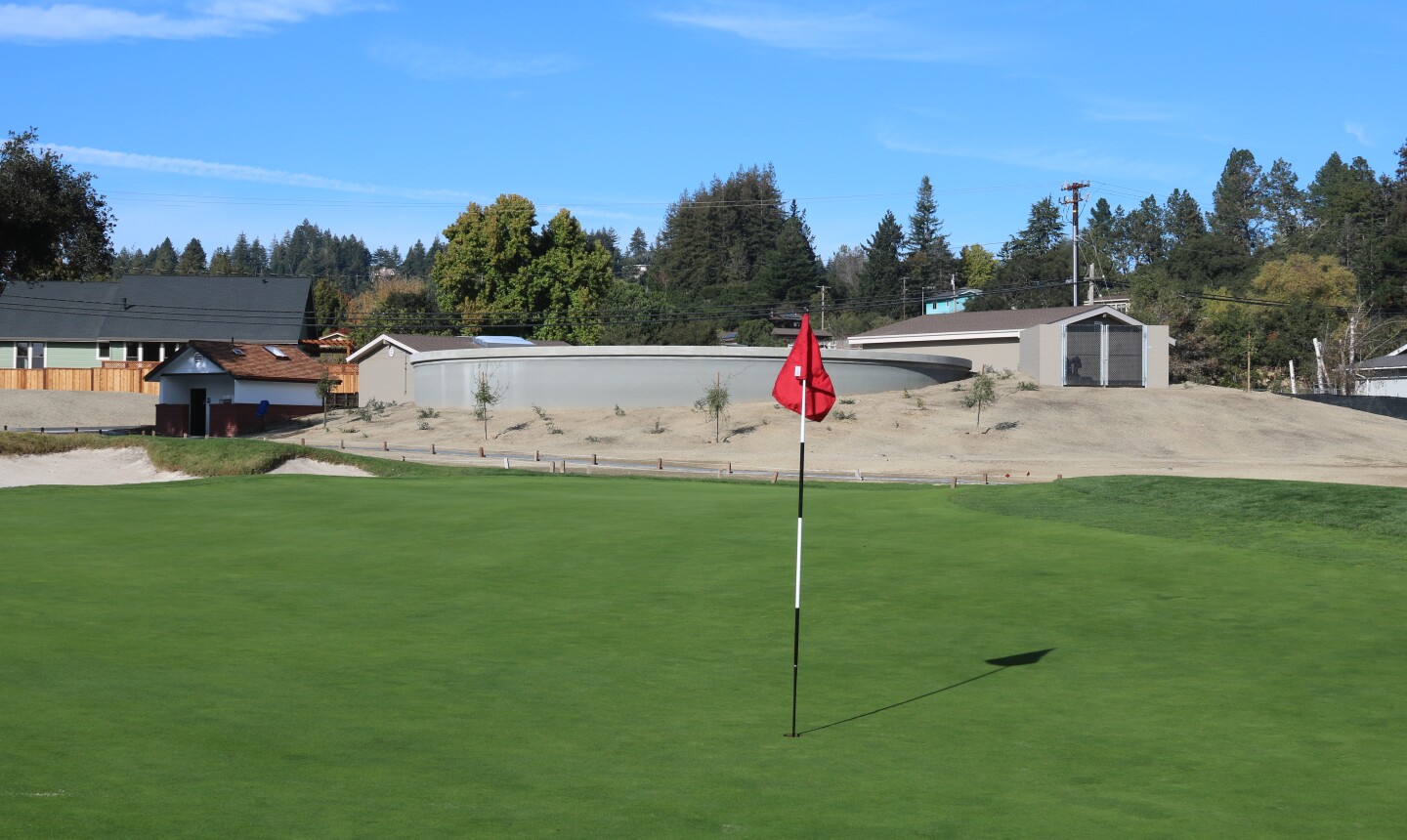 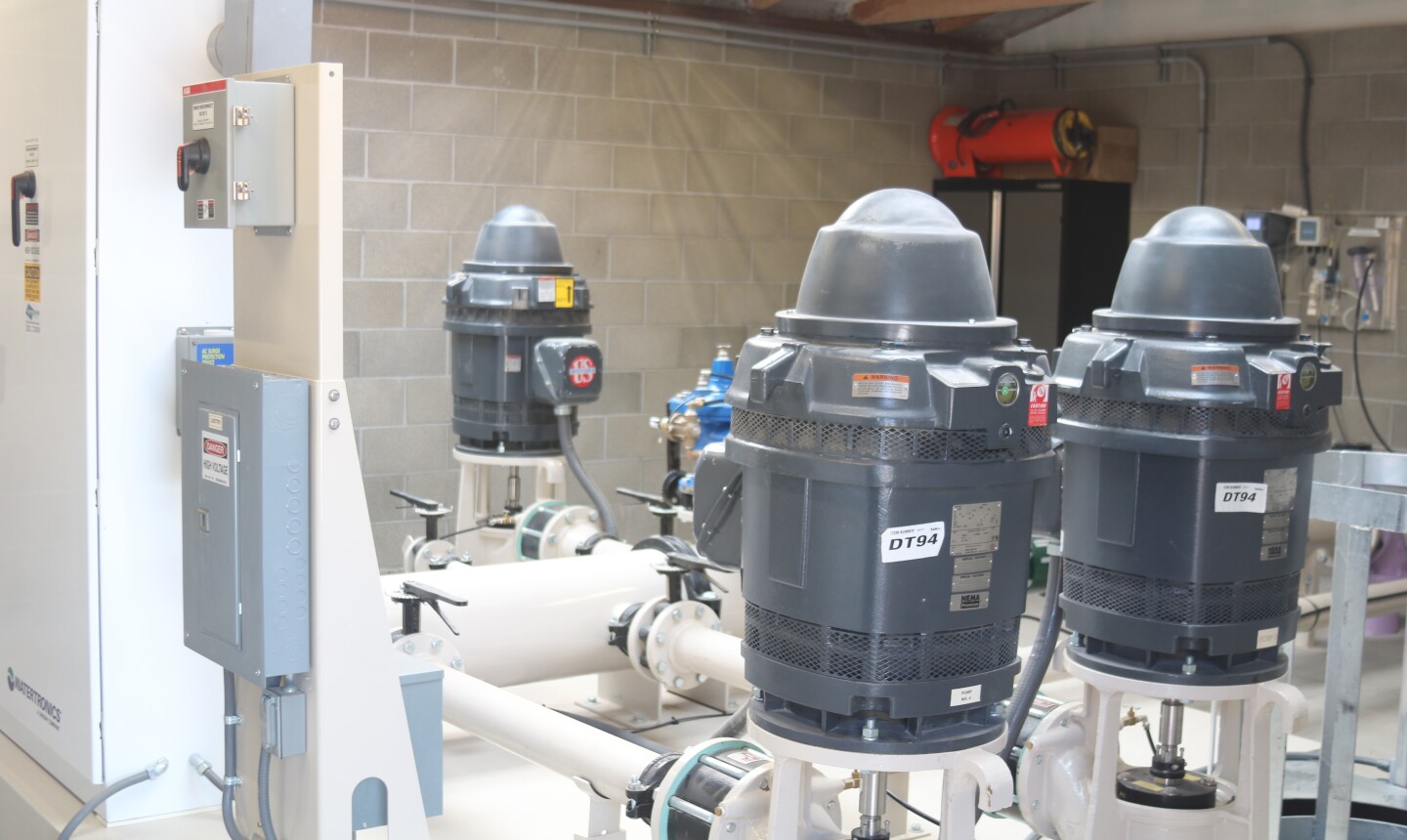 Four pumps inside a building behind the 13th green push water onto the Pasatiempo Golf Club. Jason Scott Deegan/Golf Advisor A golfer walks across the bridge toward the 11th green at the Pasatiempo Golf Club. Jason Scott Deegan/Golf Advisor 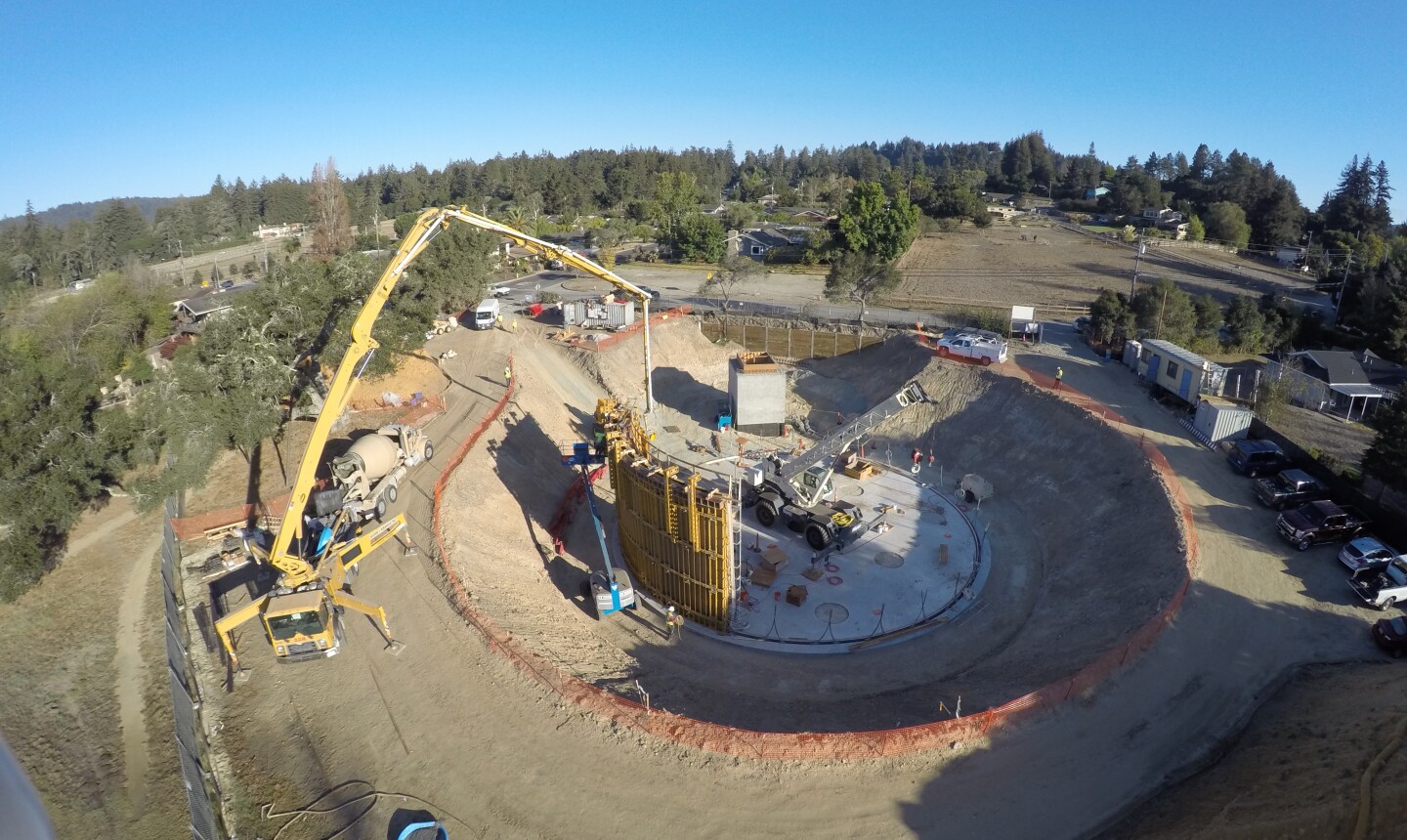 An aerial look at construction of the $9-million wastewater treatment facility at the Pasatiempo Golf Club. Courtesy of Justin Mandon

SANTA CRUZ, Calif. - Justin Mandon is no longer just the superintendent of the Pasatiempo Golf Club.

Pasatiempo's new $9-million facility became operational October 13th, roughly 18 months after the famed Alister MacKenzie course signed a 30-year agreement with the neighboring community of Scotts Valley for the rights to use recycled city water previously pumped into the ocean.

Years of work behind the scenes by Mandon and Pasatiempo General Manager Scott Hoyt culminated in a grand opening celebration Wednesday, November 15. Gone are the fears of another disastrous brownout like 2014, when the club could only water tees and greens during mandated rationing from the city of Santa Cruz.

This ground-breaking project could have major implications throughout the golf industry in California. Pasatiempo will eventually have three water sources at its disposal - treated water from Scotts Valley, potable water from Santa Cruz and potentially more water from a well dug in 2014 that isn't operational yet.

Hoyt and Mandon have already been approached by the owners of at least one club - Cinnabar Hills Golf Club in south San Jose - to learn more about the negotiations, bureaucratic steps and construction of the project.

Every course in California is searching for affordable water as expenses spiral out of control. Pasatiempo got lucky that an engineer from Scotts Valley put a pipe with an access valve on property in 1979. Even with that act of foresight, the deal took years to broker. Other clubs will have to spend considerably more laying pipes off-property just to tap any such sources.

"There are other courses that will try to do this," Hoyt said. "Who can afford it? A private club, maybe. People will seek us out. It started as a security play (against the drought) and turned into a financial gain."

That's the intriguing part. Both Hoyt and Mandon estimate this new system will pay for itself quickly, possibly within a decade. Hoyt said the club will save $600,000 in water costs the first year alone. Mandon said water rates from Santa Cruz have more than doubled since he was hired five years ago.

"There are so many layers to this," Mandon said. "As a superintendent, you don't train for this in school. It's a crash course. It's been interesting and fun. If this (plant) didn't exist, we wouldn't have the water we need or at a cost that is affordable. This is the sustainability of this club. This is what I was tasked with as soon as I got hired."

Mandon has the keys to an expensive car, so to speak. The treatment facility, located behind the 13th green, has been tested over the past month, although irrigation water might not be needed during the upcoming rainy season this winter.

Mandon can manage the system from an app on his phone and his laptop. With just a touch of a button, he can draw from any of his water sources and control how much water from each is allocated where. The system monitors key chemicals such as chlorine levels. If anything goes out of balance, the system will shut itself down.

Video: Ginella on the history of Pasatiempo's water challenges

Mandon said the recycled water from Scotts Valley has already been treated twice and disinfected twice when it arrives in an underground vault three stories deep. The water then is pumped through a series of filtration units in a separate building to improve its turbidity (i.e. clarity) before funneling into a second 500,000-gallon storage tank buried three-quarters underground. Four pumps in another small building push the water onto the course through a main line.

The club has taken efforts to disguise the facility, planting bushes and landscaping. Once they mature, the circular storage tank will be more hidden from view. A new permanent restroom building blends in with the infrastructure as well.

"There were a ton of curveballs along the way," Hoyt said. "It's just been truly remarkable (to be done). This has been a home run for Pasatiempo. 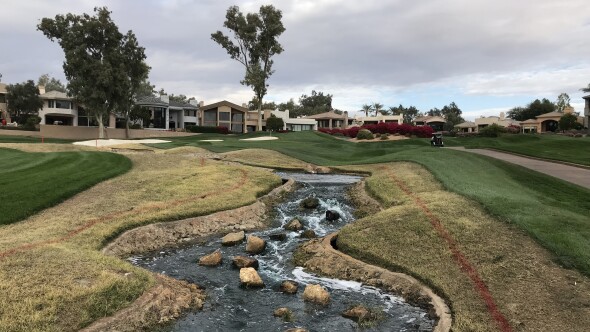