Change is good for Turf Valley in the Baltimore/Washington, D.C. area 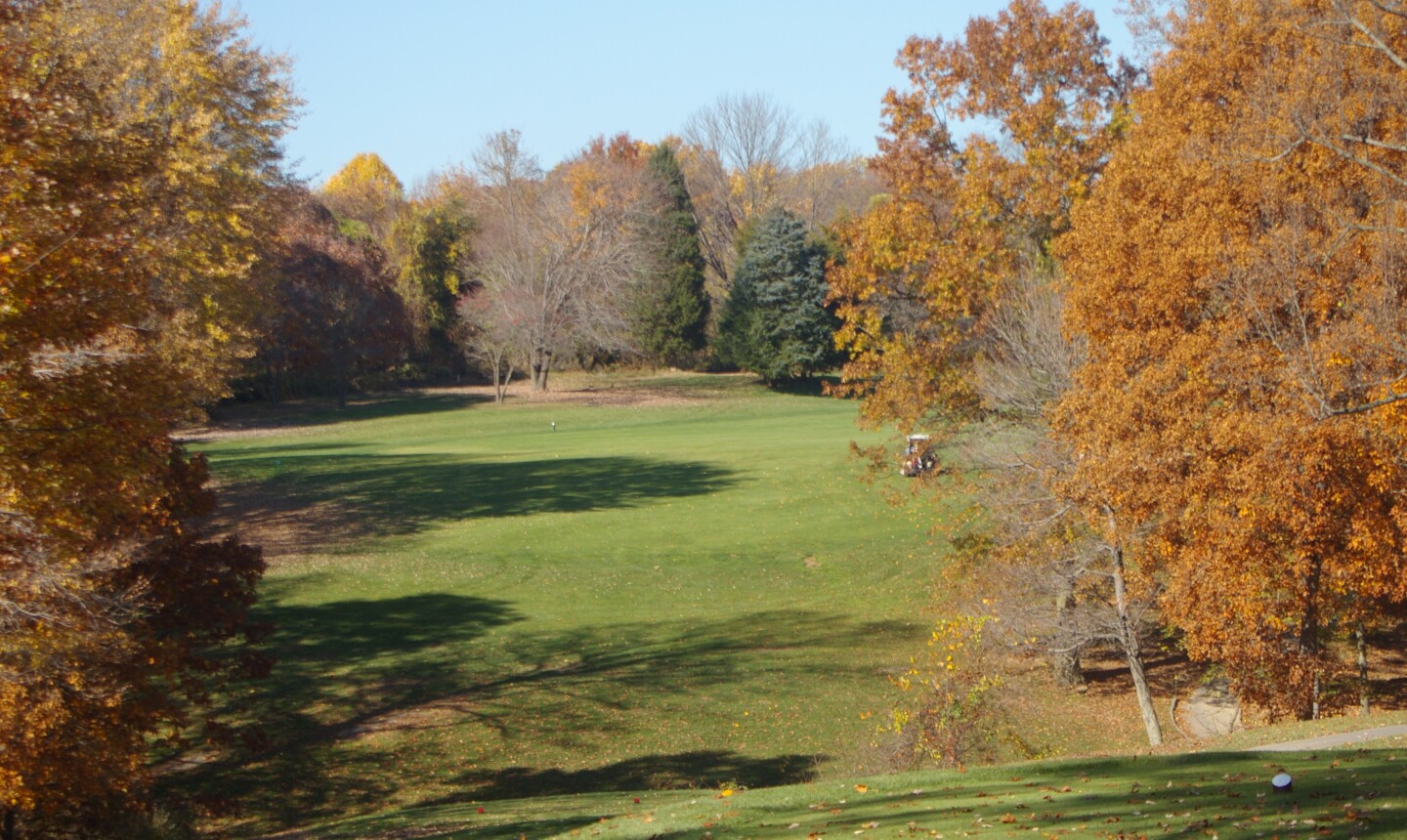 No. 4 on the Hialeah Course is the toughest hole of the 36 at Turf Valley. Kevin Dunleavy/TravelGolf 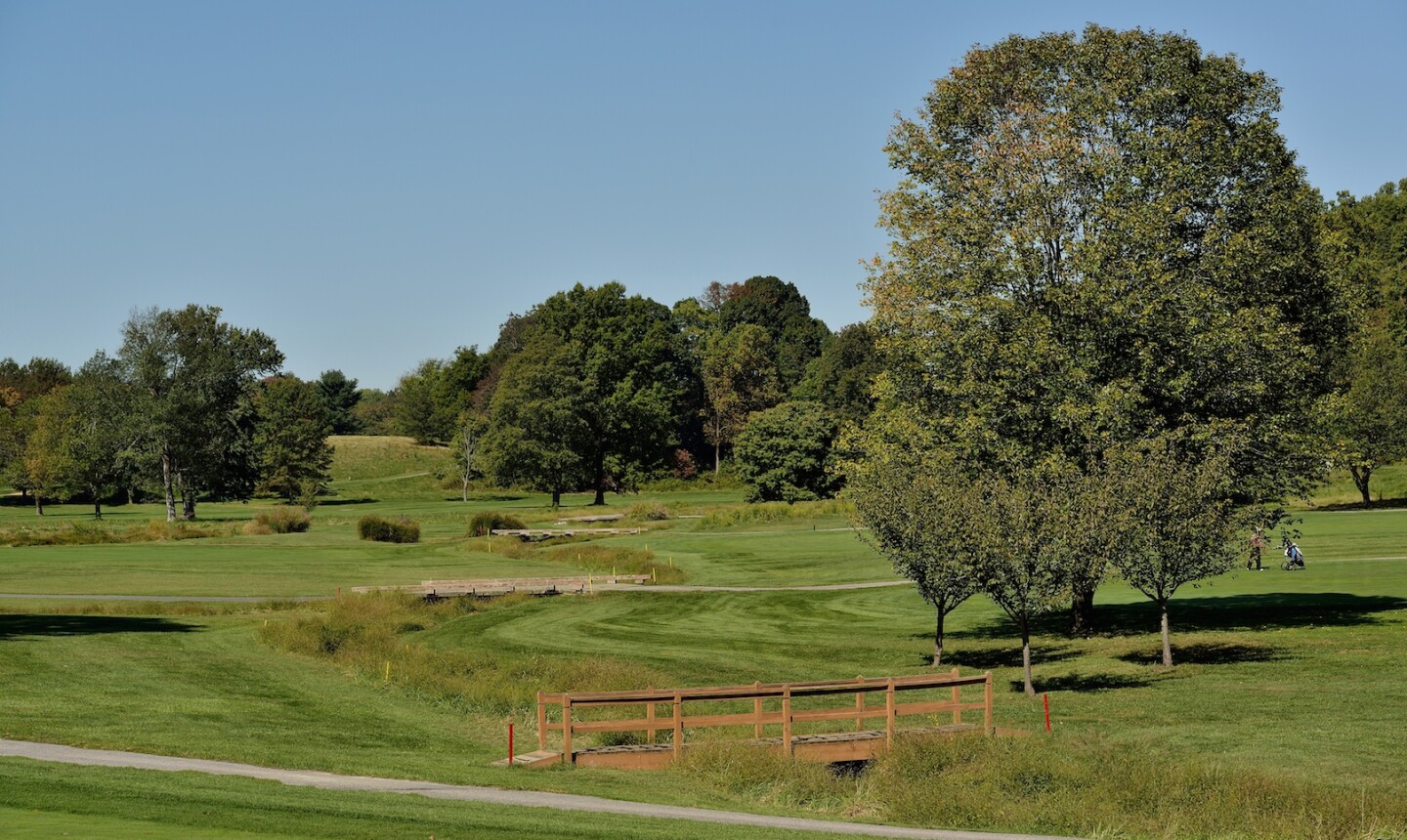 A view of no. 15 on the Original Course at Turf Valley in Ellicott City, Md. Courtesy of Turf Valley 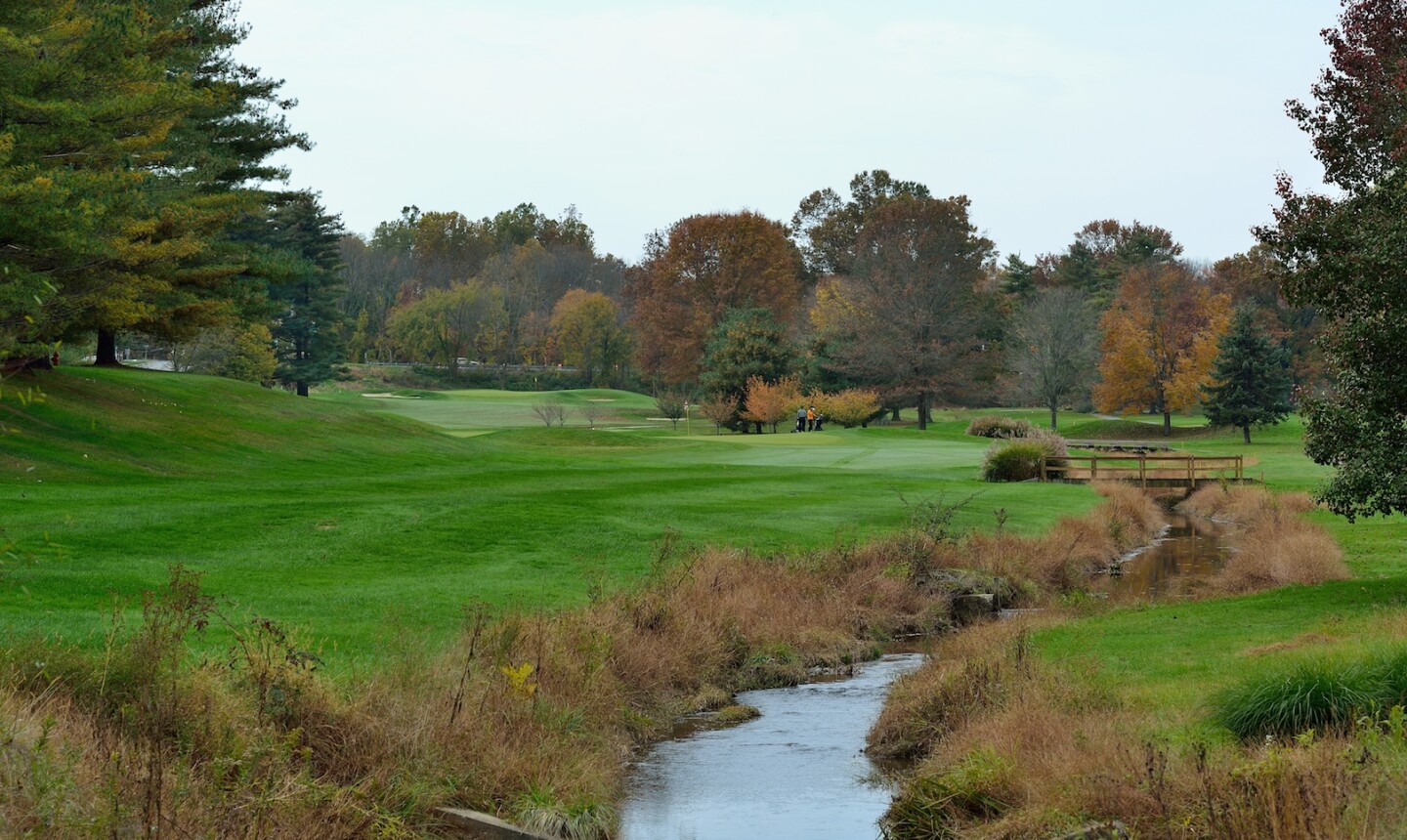 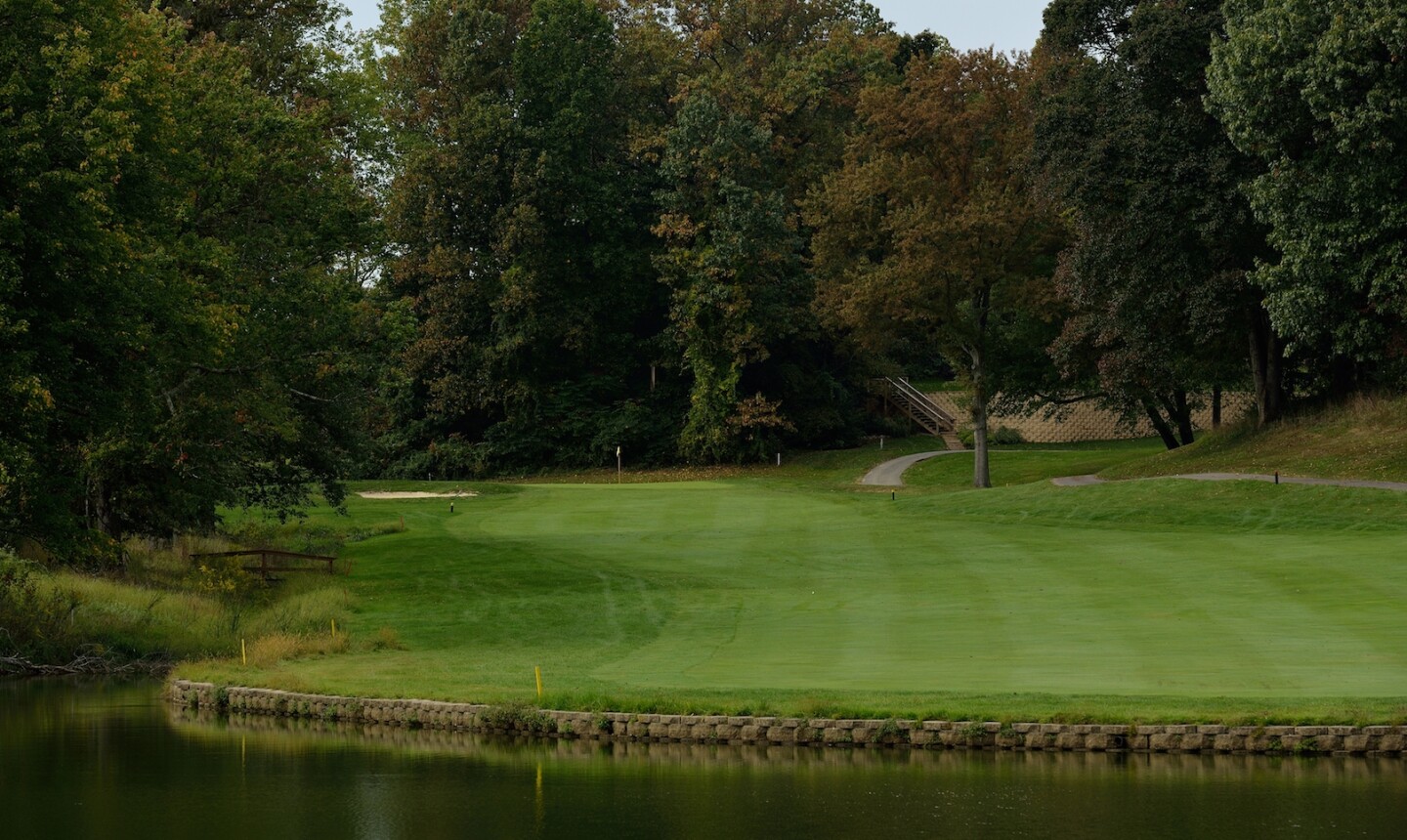 The best hole on the Original golf course at Turf Valley is no. 2, an L-shaped par 4 with a long tee shot over water. Courtesy of Turf Valley

ELLICOTT CITY, Md. -- When asked to timeline some of the alterations over the years at Turf Valley, Director of Golf Nick Spinnato squints into the distance, scratches his head and asks for forgiveness.

It's easy to understand why Spinnato's memory isn't so clear. After all, few golf facilities have undergone as much change as Turf Valley.

A generation later, it had become a combination private club/golf resort so successful that it added nine holes in 1996 and nine more in 1999, becoming the only facility in the Baltimore/Washington, D.C. area with three full-size 18s.

These days, Turf Valley is the centerpiece of a bustling community of the same name, with so much residential and commercial real estate sprouting nearby that its 54 holes have been reduced to 36 to accommodate the surge.

The best news for nonmembers is that inexpensive stay-and-play packages are available to enjoy Turf Valley's upscale accommodations, spa, fine dining and private-course experience, which include an extensive practice area and a state-of-the-art indoor learning center.

Turf Valley's original 36 holes were designed by the region's most prolific golf architect, Ed Ault, who passed away in 1989. When the facility added 18 holes in the 1990s and needed renovation a decade ago, it entrusted the job to Ault's son, Brian Ault.

Count Turf Valley among the most ambitious projects the Ault group has designed.

When the club was still in its infancy and decided it needed more exposure, Turf Valley hosted an LPGA Tour event from 1962-66, won the first and final years by Kathy Whitworth and in 1965 by Baltimore native Carol Mann.

And with that, and a growing membership, Turf Valley was off and running.

Today the two 18s have their own distinct character.

Cut through rolling, mature woodlands and criss-crossed by streams, the Hialeah Course (6,547 yards/72.0/138 slope) is short, tight and full of elevation change and pitfalls. Turf Valley's Original Course (6,762/71.3/130) is longer, flatter and more reminiscent of layouts of its era, with parallel holes and short walks from greens to tees.

Players looking for a challenge and aesthetics will favor the Hialeah Course, which opens -- appropriately enough -- with an intimidating tee shot from an elevated tee to a narrow, twisting fairway framed by thick woods.

The fourth at Hialeah, a dogleg right and the longest par 4 on the course at 437 yards, is the toughest hole on either course, playing over a ravene to a domed fairway. The hole is reminiscent of another Ault creation of the same length, no. 1 on the West Course at Baltimore C.C., though Turf Valley's version has a much more demanding tee shot.

Highlights on the back nine are the co-located greens of no. 13, a 192-yard par 3 over water, and no. 15, a tough par 4 with both the tee shot and approach over ponds.

The Original Course is played on flatter, less wooded property, with the exception of the first five holes. The best is no. 2, an L-shaped par 4 with a long tee shot over water where players can leave themselves an approach anywhere from 100 to 250 yards, depending on how much they are willing to gamble.

Two holes later, the 445-yard fourth tests players with a dogleg that bends the opposite way as well as a downhill tee shot and uphill approach.

The rest of the Original Course is straightforward, level and feels like a retro, communal experience. On the back nine, holes are so close together that players are often visible across one, two and three fairways.

The best thing about Turf Valley is its private feel and public access. There are many stay-and-play options in the region, but none can match the combination of upscale amenities at a reasonable price, the private-course conditions, the diversity of courses and the Interstate convenience of Turf Valley.

I made reservations for my son's as a Christmas gift, I read unlimited golf per day and made the tee times with the reservationists. Two for Saturday and one for Sunday. The definition for per day is each day. I verified that each day was unlimited. He did say the golf cart would be 22.50 for the second round Saturday and I couldn't prepay it and the golf pkg for two days of unlimited golf was 286.00. I called three times before 6\30 and my boys were enjoying their stay until they went to play at 9.00am and said they had to pay hotel rates of 84.00 the only managed i got to day had no idea what was included in the package and let day meant one day only. As I mom I was upset, as a former trave! Agent K would no longer book the resort unless they make amends to my clients. They are now playing at another course. I will say separate from the package inclusions in another paragraph they say you can play at hotel rates if Tee times are available. I was told by reservations everything was fine and paid for and my son's had to leave the resort and play elsewhere. I'm waiting to hear from the assistant manager...not hopeful after dealing with Chuck and Anastasia. Very disappointed .. 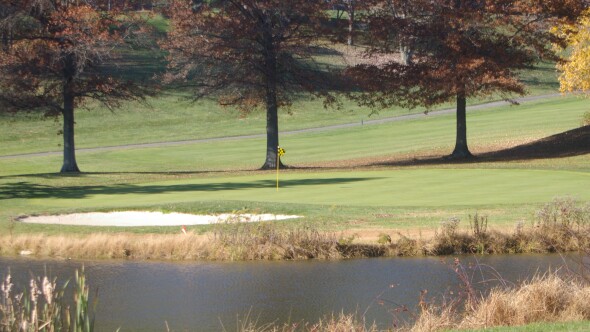 Galleries
Experience private, top-flight golf at Turf Valley near Washington, D.C.
Despite its "private" status, anyone can access the 36 holes of golf at Turf Valley in Ellicott City, Maryland with a stay-and-play package. Turf Valley's Hialeah Course is the tougher and more scenic 18. The Original Course is longer but has more room to miss and fewer hazards. Both have true, fast greens and premium conditioning.
12 Images

By Kevin Dunleavy
D.C.'s great 18: It's easy to find a stellar golf course in the greater Washington, D.C. area
More from the author

Tim Gavrich
Senior Writer
Now Reading
Change is good for Turf Valley in the Baltimore/Washington, D.C. area
Search Near Me