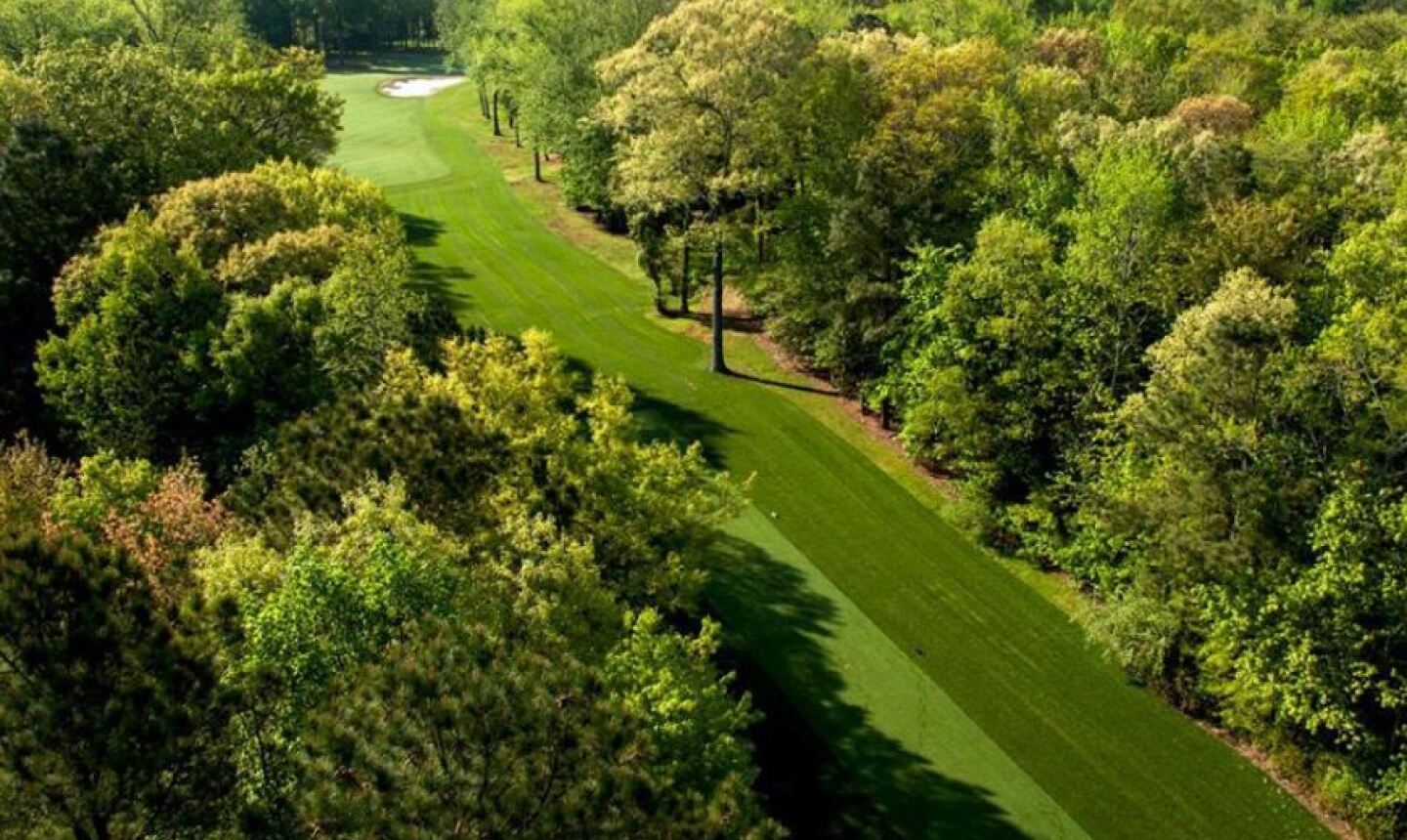 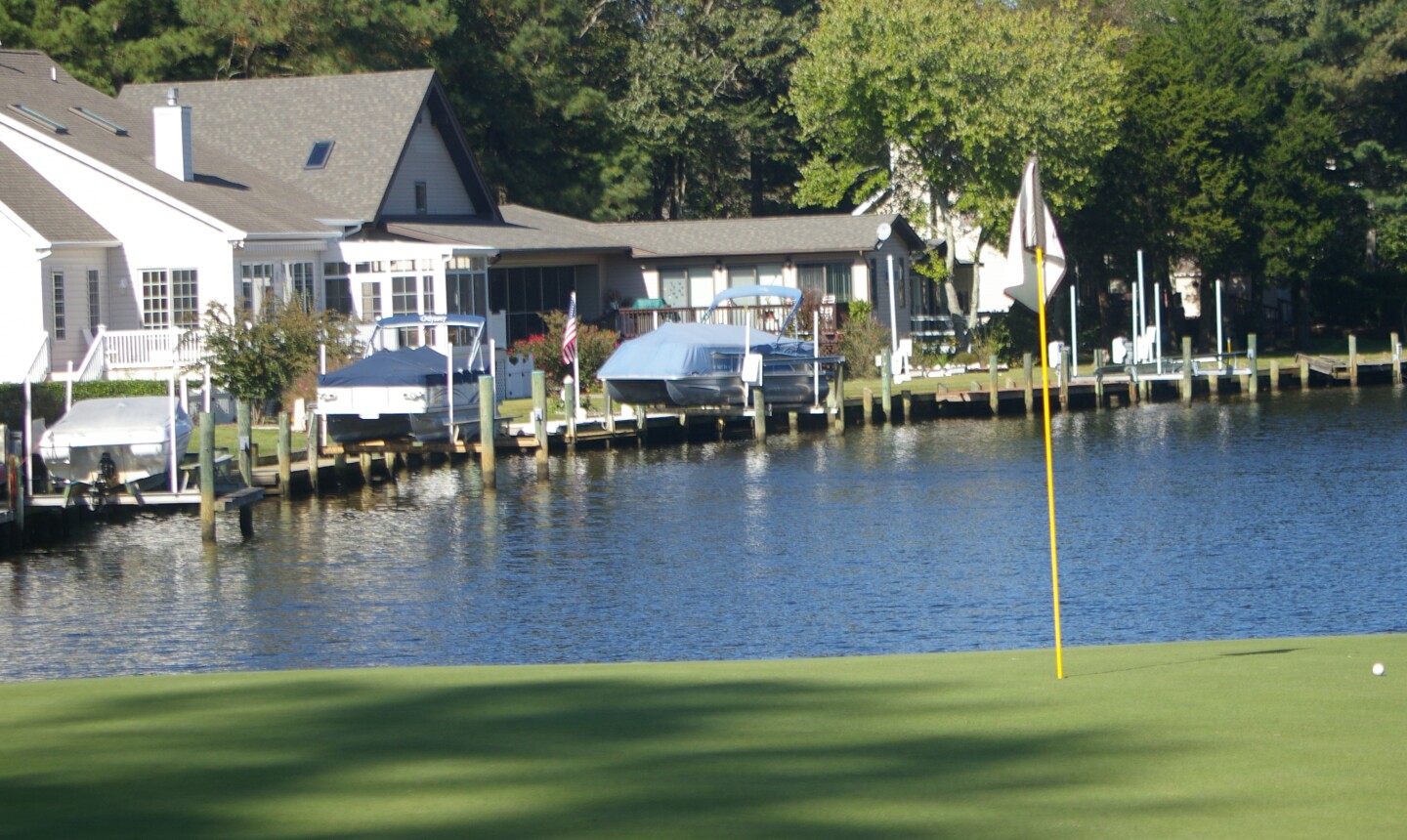 Ocean Pines Golf & Country Club winds through a development that includes many homes with waterfront property. This is evident off the third green. Kevin Dunleavy/Golf Advisor 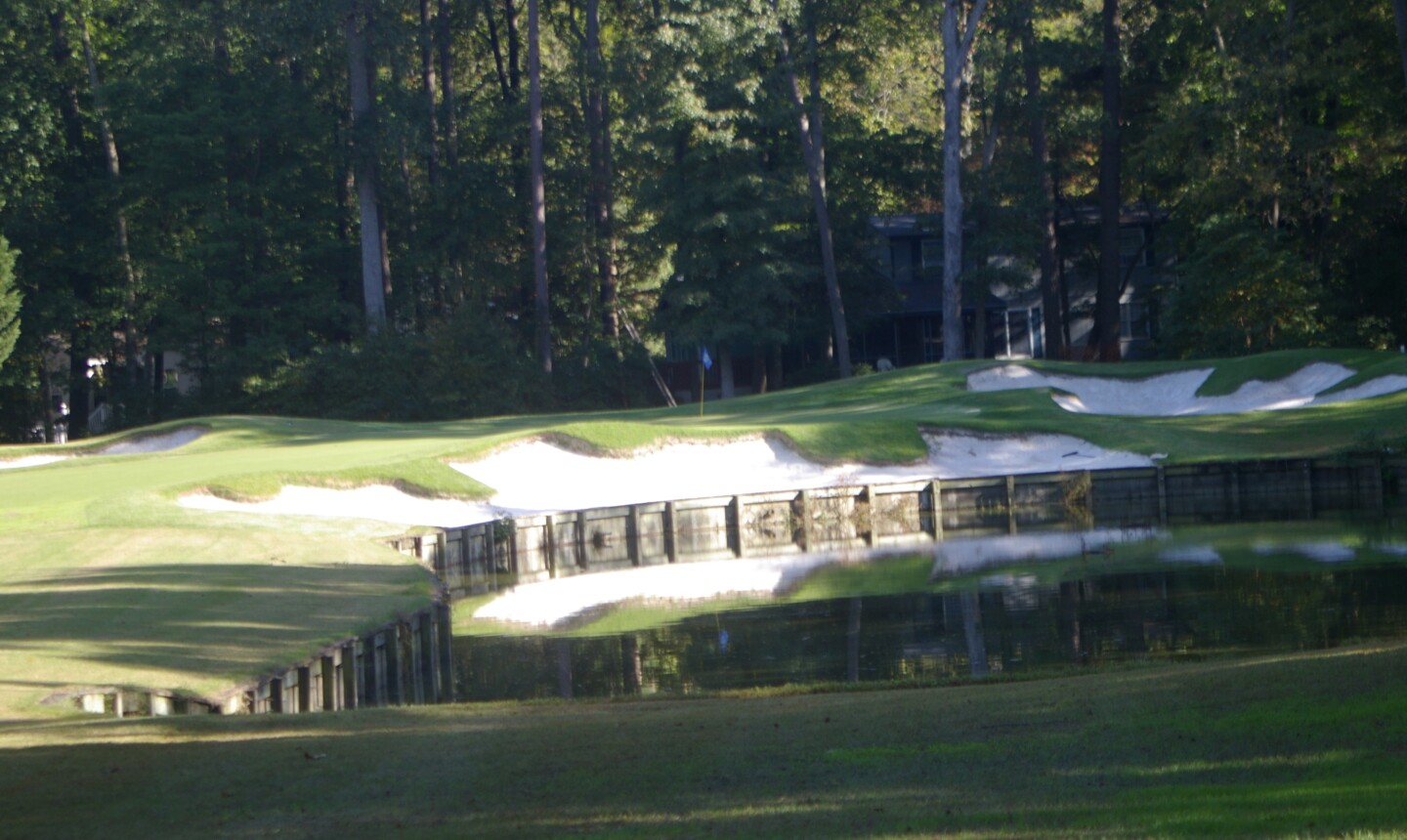 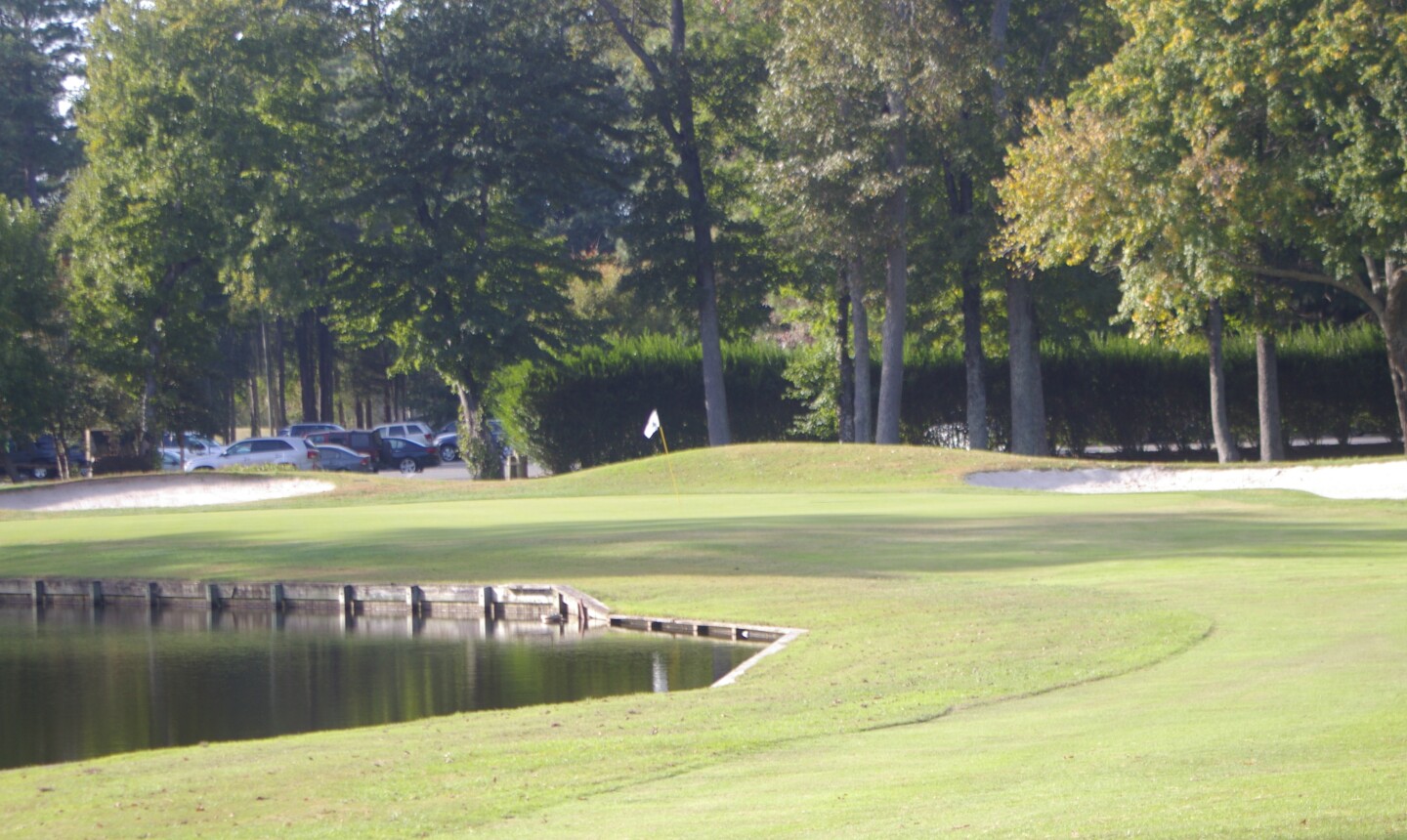 OCEAN PINES, Md. -- For decades, golfers traveling to the north end of Ocean City, Maryland got a tantalizing glimpse of forbidden fruit.

Along the thickly wooded Ocean City Expressway, visible for an instant through a gap in the trees, were two elegant holes of Ocean Pines Golf & Country Club.

In those days, you could look at the private club, but you better not touch, unless you were the guest of a member.

Adding cache to Ocean Pines was its designer, Robert Trent Jones Sr., the first of his field to be inducted into the World Golf Hall of Fame. Opened in 1972 as part of a sprawling housing development, Ocean Pines was an elusive gem in an area sorely lacking in public golf options.

But that was then. And this is now: Thanks to a golf-course building boom, which began in the mid 1980s, Ocean City has become a bona fide golf destination, with enough stellar public courses to fill even a week-long trip.

And one of them is Ocean Pines.

The fact that anyone can play the golf course isn't news to golfers who reside on the Delmarva Peninsula. But it might be for visitors who have long written off Ocean Pines as unattainable.

True to its understated nature, word of the change was unadvertised and generally passed by word of mouth. The course still shies away from its status, calling itself a "private course with public play," on GolfNow.com.

Traditional, tree lined and flat, Ocean Pines wends its way through woodlands and wetlands, through a development of modest homes, many with prized waterfront lots. This becomes clear on the uniquely set third hole, which runs along a lagoon where nearly every home has a motorboat tied to a dock.

Homes are visible on many holes but only by peering through thick woods. It would take a seriously off-line drive to reach any of them.

Robert Trent Jones is notorious for saying, "Every golf hole should be a hard par and an easy bogey." He was true to his word at Ocean Pines, which remains his only work on the Delmarva Peninsula.

The fairways are narrow and bending. While the greens are large, they are heavily guarded. Seven are bordered by water hazards. Many more are protected by steep-faced bunkers.

Fairway bunkers also are prevalent at Ocean Pines and can often convince players to leave their driver in the bag, especially on the dog-leg holes, of which there are 11. This makes the golf course a rugged test from the back tees, which play longer than their measured 7,074 yards, with a 74.8 rating and 135 slope.

Toughest hole: No. 18 -- the 415-yard par 4 has a narrow, sloped fairway, pinched by a bunker on the left side. The approach is over water to a wide but shallow green. "The second shot better be good, or you’re in trouble," Ocean Pines member Kevin Hughes said.

Best hole: No. 14 -- all the holes at Ocean Pines are named. This 90-degree-angled, dog-leg right has been appropriately dubbed Hell-uv-a Hole. With a good drive, players will have a choice to go for the green or layup. Either way, they must contend with a large pond that runs up the right side and woods on the left, framing a narrow, intimidating fairway.

Prettiest hole: No. 7 -- beautifully set with woods on all sides, the tee shot to this secluded gem is to an undulating green guarded by steep bunkers and a pond.

Ocean Pines' classic lines have stood the test of time, though over the years, the course has required some agronomic tweaks.

It wasn't long ago that Ocean Pines would resort to painting over bare spots on greens. But that's no longer necessary. The condition of the smooth, fast bentgrass greens has greatly improved over the last five years after the removal of more than 1,000 trees, giving the course more air.

The facility retains its private feel as golf access is in the bottom floor and the rear of the clubhouse, hidden from view from the parking lot. With wooden lockers and a card table in the middle, the locker room has a retro feel. Same for the pro shop and grill with their clear glass walls.

Combined with Robert Trent Jones' sophisticated layout, it all adds up to traditional elegance at Ocean Pines, a feel that can't be found at any other public course on the Delmarva Peninsula. 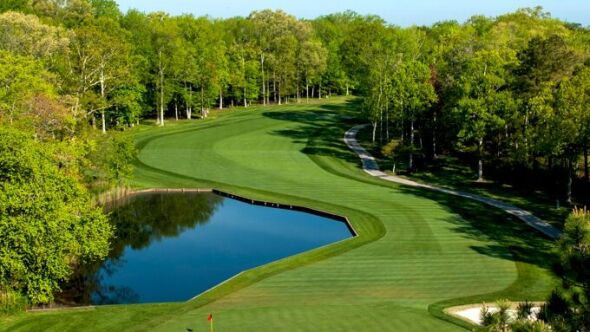 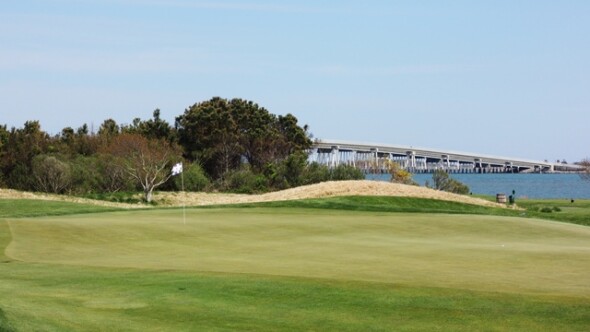 Articles
Along the Eastern Shore of Maryland and Delaware: Seaside and inland golf worth the drive
If you like seaside golf, the Eastern Shore of Maryland and Delaware is your ticket. There aren't a hundred golf courses here like there are in Myrtle Beach, but the quality is just as good if not better, albeit perhaps a little more expensive. Best of all, though, for those who live in the big cities of the Northeast and Mid-Atlantic, it's convenient.
4 Min Read