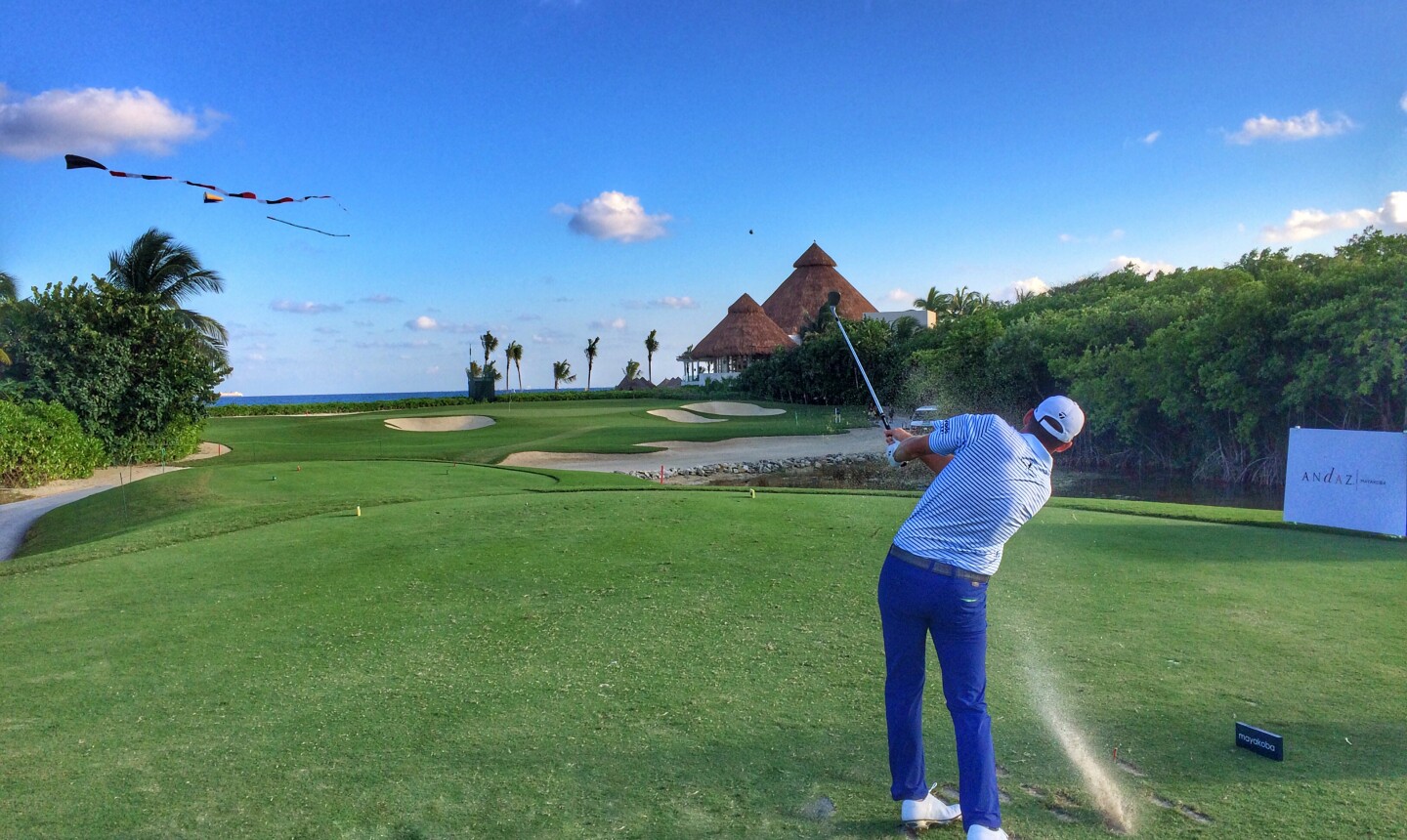 Jim Herman tees off on the 7th hole of El Cameleon during the 2017 Pro-Am at the OHL Mayakoba Golf Classic. Brandon Tucker/GolfPass The seventh green on the Ocean Course at Cabo del Sol is built into a sand dune near the beach. Jason Scott Deegan/Golf Advisor 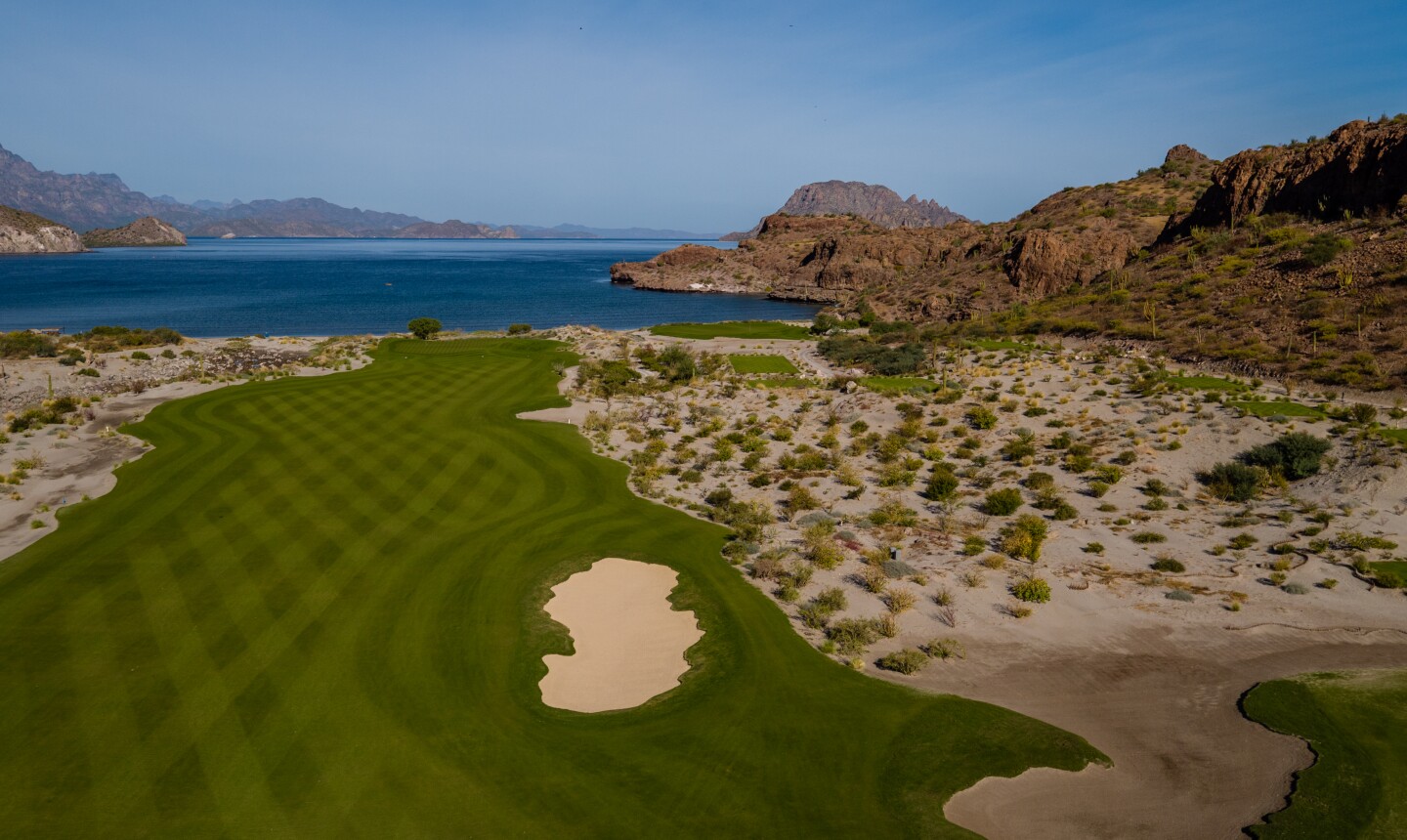 While some American tourists have been avoiding Mexico due to safety concerns, I've grown fond of my regular golf trips south of the border over the last decade. Tourism is so important to the Mexican economy that the locals work overtime to make sure visitors have a good time, hoping they come back again with a few more friends.

Most of the golf resorts in Mexico's hottest tourist destinations along the coasts are guarded by security gates. I've felt safer on their lush resort courses than on many municipal courses in America's big cities.

In celebration of Cinco de Mayo, I've scoured my memory banks for the best Mexican golf has to offer, from courses and resorts to spas and excursions.

1. Los Cabos: Five-star golf and resorts in this stunning mountain-desert-ocean landscape at the tip of the Baja Peninsula are the rule not the exception. It has recovered nicely from Hurricane Odile in 2014.

2. Puerto Vallarta/Punta Mita: Golfers can fly into Puerto Vallarta to stay near historic downtown boardwalk or head north to the sprawling modern resorts along the Riviera Nayarit. The ultimate escape comes at Punta Mita, home to Four Seasons and St. Regis resorts and 36 holes of seaside golf by Jack Nicklaus.

3. Cancun/Riviera Maya: Cancun might be known for its spring break crowds, but many of the golf resorts along the Riviera Maya are more sophisticated and keep the party to a dull roar. There's a variety of courses by Greg Norman, Nicklaus, Nick Price, P.B. Dye and more.

4. Loreto: This isolated locale is emerging with the 2018 debut of the TPC Danzante Bay, a Rees Jones beauty at the Villa del Palmar Beach Resort & Spa at The Islands of Loreto. The first Golf Advisor Round Trip invites you to visit Dec. 7-10, 2018, with Matt Ginella of the Golf Channel. For more information, read here. The Loreto Bay Golf Resort & Spa, home to a 1970s course tweaked by David Duval, is also nearby.

1 (tie). Rosewood Mayakoba, Riviera Maya: Checking into the Rosewood, one three luxury hotels within Mayakoba, guests ride water taxis through the mangroves to posh casitas with outdoor showers and private plunge pools. Golfers will be challenged by El Cameleon at the Mayakoba Golf Club, the host course of Mexico's only PGA Tour event.

1 (tie). One&Only Palmilla, Los Cabos: Service -- and the serenity it brings -- is the reason this property excels. The resort took its time reopening after the hurricane to repair the damage and add upgrades where necessary to stay ahead of the competition.

3. Four Seasons Resort Punta Mita: It's got a great spa for Mom, a nice beach for the kids, and Dad will love the golf. Everybody will savor the food and the sunset.

4. Villa del Palmar Beach Resort & Spa at The Islands of Loreto: Although the course is new, the hotel has been charming guests since 2011. The spa and food are first-class. Everybody cherishes the time spent on the water - kayaking, snorkeling, scuba diving, fishing, etc.

5. Iberostar Grand Hotel Paraiso, Riviera Maya: Those who stay at the Grand Hotel can explore the restaurants, bars, pools and beaches of the other four properties in this mega-resort but don't have to share the five-star amenities of the Grand with other resort guests.

2. TPC Danzante Bay: Rees Jones calls it "one of the best sites in the world for golf." The views of the Sierra de la Giganta mountains are stunning, but nothing compares to the par-3 17th hole overlooking the Sea of Cortez.

4. El Cameleon at Mayakoba Golf Club: Norman designed Mexico's only PGA Tour venue as a strong test of golf through the jungle and mangroves and along the beach.

5. Litibu Golf Club: Norman created three ocean-view holes. Some of the jungle holes are even better. This former Canadian Tour venue is often overlooked, despite being just minutes from Punta Mita.

1. Quivira: Only golfers who stay at a Pueblo Bonito resort or own property inside the development have access to this epic round through dunes and desert and along a mountain cliff.

2. Dunes Course at Diamante Cabo San Lucas: Only golfers who own or rent property within the emerging development and go through a one-time "sales presentation" may play this top 100 course by Davis Love III or El Cardonal, the first course in the world designed by Tiger Woods.

3. Pacifica at Punta Mita Club de Golf: Nicklaus takes golfers on a four-hour oceanfront tour that would make Gilligan jealous. Only guests of the Four Seasons or St. Regis can play.

4. Bahia at Punta Mita Club de Golf: Bahia has only six ocean holes to Pacifica's eight. Some greens are so undulating that the slopes look like waves coming off the ocean.

1. Hole 17, TPC Danzante Bay, Loreto: Resort owner Owen Perry found the location of the hourglass-shaped green on the other side of the mountains away from the resort and pushed for routing changes for it to be included. Wise choice. It's a draw in itself.

2. Hole 13, Quivira, Los Cabos: With apologies to the scenic sixth hole, this is the best par 3 at Quivira, which opened in 2014. It's just a short iron over an ocean cove to a narrow green sculpted from a rocky cliff.

3. Hole 7, the Ocean Course at Cabo del Sol, Los Cabos: This short, dynamite par 3 sits so close to the beach that golfers could dip their toes in the Sea of Cortez if they wished.

4. Hole 3b, Pacifica, Punta Mita: Players take on this extra hole, called "Tail of the Whale," by hitting to a natural island green in the Pacific. When the tide is in, golfers take an amphibious golf cart to putt out and retrieve their ball.

5. Hole 17, Bahia, Punta Mita: This spectacular ocean par 4 boomerangs left along the beach, finishing at an elevated green with some wicked curves.

Top five attractions away from golf

1. Whale-watching: The migrating humpback and grey whales put on a show in Los Cabos from December through March.

2. Visiting the past: Exploring the Mayan ruins near Cancun in Quintana Roo and the Yucatan Peninsula -- Tulum, Chichen Itza and others -- is still on my bucket list.

3. Exploring local towns: I have great memories of drinking and dining in Sayulita, an eclectic collection of bars, surfers and art galleries near Punta Mita; Playa del Carmen south of Riviera Maya; and walking about Loreto, a tiny fishing town home to the oldest mission on the Baja Peninsula.

4. Water sports: The west coast is definitely better for fishing (especially Cabo) and snorkeling and scuba diving (La Paz and Loreto), but Cancun and Riviera Maya will suffice, too.

5. Spa days: Some of the best spas I've experienced are in Mexico. The One&Only Spa at Palmilla and Sense, a Rosewood Spa at Mayakoba, and the Sabila Spa at the Islands of Loreto are world class. Many tend to be more affordable, too.

1. Mexico safety concerns: Will this issue ever cease?

2. All-inclusive golf: Quivira, Diamante, Moon Palace Golf & Spa Resort, Iberostar Playa Paraiso Golf Club and others serve free food and drink as a way to recruit golfers away from the beach. Will others follow suit?

3. New golf courses: Courses continue to sprout up along the west coast. The Oasis, a short course by Tiger Woods, opened last December at Diamante in Cabo. The Greg Norman Signature Course at Vidanta Nuevo Vallarta, a sprawling resort in Riviera Nayarit, opened in 2016. A 10-hole par-3 course was added in 2017. Puerto Los Cabos debuted nine new holes by Nicklaus this year to grow to 27 holes. Norman's Rancho San Lucas project and Twin Dolphins by Fred Couples and California's Todd Echenrode - both set in Cabo, where else? - could be ready by winter 2018-19.

4. New Resorts: The robust U.S. economy is fueling growth in hot spots like Cabo, but how many high-end resorts does Mexico need? In Cabo alone, the Grand Solmar Land's End Resort recently completed its third and final phase of development; the Hard Rock Hotel Los Cabos will open in Diamante this year; and the Four Seasons Resort Los Cabos at Costa Palmas debuted in 2018.

5. Pesos or dollars?: It's probably best to exchange some money in advance, although I've never had an issue if I didn't. Government policies require major businesses such as resorts to reject American money -- in essence to support the peso. The exchange rate of the peso has been so poor lately, though, that most businesses accept either one.

i go to Cabo two weeks a year and Riviera Maya 8-10 weeks a year. the Dye Course at Iberostar Plya Paraiso is terrific, hosting Latin American tour event in three weeks, better than over priced Myacoba. Also El Tinto (formally Cancun CC) very nice Nick Price layout. Fantastic place to stay for guy trips or couple trips is Hacienda Del Secreto, private villas on the beach no crowds, each villa has its own pool, great food and Ritz Carlton service. it's my home away from home. 10 great courses within 45 minutes.
As far as safety goes, an unaccountable press can do a lot of damage. if you are not out in the wrong part of town at 1 a.m. looking for drugs etc there is no problem here. Mexico is no different than any big city in the US if you are in the wrong place doing the wrong thing, i notice there are no travel warnings to Chicago!
don't be affraid of Mexico! great golf, Food, Beaches and people!

One of the best courses in the Caribbean is Moon Palace
just outside of cancun. I'm afraid you have missed the mark in this 5 best.