Two moments stand out; one major champion anchors both of them.

(This is a special-edition spinoff of my every-Friday Cool Golf Things column: a Cool Golf Memory.)

It was Wednesday, June 28, 2000, the day of the Canon Greater Hartford Open (now the Travelers Championship) Pro-Am, when Justin Leonard helped turn me into a lifelong golf fan for the second time.

The first happened nine months and two days earlier, when Leonard canned the miraculous winning putt for the American side in the 1999 Ryder Cup. My dad had started me playing golf a couple years earlier and I enjoyed the game pretty much from the first swing, but when that putt went in, I screamed and ran around the house in excitement, ignited.

Back to 2000. Dad was playing in the pro-am on behalf of the company he worked for at the time, one of the tournament's sponsors. He'd played a couple times previously, but I had been deemed too young to tag along. This year, I was allowed to "caddie" - i.e. walk along while someone else carried his bag - for him.

Leonard's group approached the tee of the drivable par-4 15th at TPC River Highlands where my dad's group, led by amiable journeyman Skip Kendall, was waiting. When Leonard, the 1997 Open Champion, tapped 10-year-old me on the shoulder, looked me squarely in the eye and asked me the question above - as if I was actually playing, never mind weighing the decision to go for the green - I was starstruck in that giddy-shy way kids get when they meet a big-time sports figure for the first time. My face must have gone fuchsia. I don't recall having much of a verbal reply, but you couldn't have belt-sanded the smile off my face.

What took me years to realize was that the major champion was treating me like an adult, not a child. I was little more than part of the scenery that day, but Leonard made me feel like much more than a tag-along wearing a too-big caddie bib. No doubt influenced by the gentleness of fellow Texas Longhorn Ben Crenshaw, who himself must have been influenced by the great ambassador's demeanor of Arnold Palmer, Leonard made me feel like some kind of equal.

Seconds later, Leonard inducted me into the adult-level sports tradition of trash-talking. Gary Nicklaus was also on that crowded tee box with his group, waiting for the green to clear before he swung away. When he did, flaring a drive that came up well short and right of the green, Leonard asked loudly, "You made us wait all that time for THAT?" The jab sent the assembled golfers and spectators into hysterics.

To be fair, it's a pretty common golf dig, but I had never heard it before, and I had certainly had never been party to such an exchange between professional athletes. Between my father letting me accompany him and Justin Leonard's unprompted interaction with me, I had been made an Honorary Grownup for the day. It was thrilling. What's more, this confluence of events and personalities took me to the heart of golf insider culture for the first time. How could I not be hooked?

Though he was the higher-ranked player at the time, Leonard would miss the cut that week while both Nicklaus and Kendall cashed checks. Did Leonard summon the Golf Gods' fury with his ribbing of a Golden Bear cub? I hope not, because he pushed me even deeper in love with a game that was already pulling me close, for the second time. 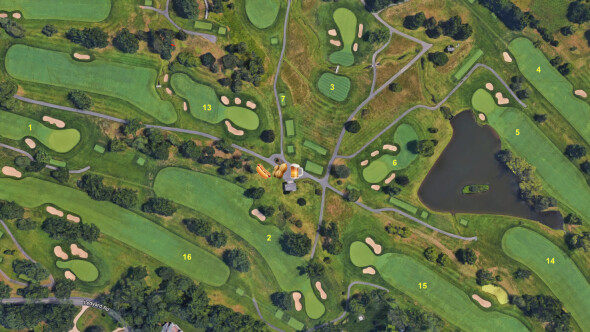 Great story!!! Yeah .. Justin does seem to be a really nice guy! Haven't met him, of course, but from reading about him, seeing him on a teaching segment on GC and also at the announcer's desk at tourneys, etc. 👍