The inaugural U.S. Adaptive Open was an emotional experience for competitors and fans of the game.

Dennis Walters is one of modern golf's great trick shot artists. What makes his shows so incredible is the fact that he has paralyzed from the waist down since a golf cart accident in 1974. In 1997 or 1998, he gave an exhibition at Rockledge Country Club in West Hartford, Conn. I was among the crowd of junior golfers wowed by his abilities to hit golf balls, both stationary and moving, with crazy-long clubs and off high tees.

A quarter-century later, it was my privilege to chat with him this week at the inaugural U.S. Adaptive Open, held at the crossroads of American golf: Pinehurst, North Carolina. While in town seeing several of the eponymous resort's courses for the first time in 16 years, I ended up with the opportunity to take in the scene at the championship's closing round at Pinehurst No. 6 on Wednesday.

The USGA established the Adaptive Open to provide a competitive opportunity for golfers with physical, physiological and intellectual disabilities that is worthy of the awe their golfing abilities inspire in the rest of us. It came with all the trappings of any USGA championship, from large and official signage and player scoring and hospitality areas right down to the iconic red hole flags on black-and-white flagsticks, not to mention tremendous support from the community and significant media coverage, too.

"I hadn't played in a golf tournament in 48 years," said Walters, who shot rounds of 86-84-92 to finish as the low Seated golfer in the 96-player field of men and women. But he and dozens of others responded to the USGA offering the opportunity to compete at Pinehurst.

In addition to the overall title, won by Simon Lee of Korea with three straight rounds of 71, there were other divisions besides' Walters' that included golfers with single or multiple limb impairments, neurological, vision or intellectual impairments and short stature. "The USGA deserves the highest of praise because of what they did to put this on," Walters said.

After speaking to Walters, I was briefly overcome with emotion. I couldn't help it - I thought about myself as a little kid at his exhibition, sitting on the grass on a beautiful day with a bunch of others, watching in awe as a golfer who had no use of his lower body in a custom-made one-seat golf cart hit beautiful golf shots in a way I didn't know was possible.

Flashing forward to this week, being lucky enough to write about golf for a living, speaking with Walters and watching his fellow adaptive golfers hit beautiful golf shots of their own, I had the exact same sense of wonder and deep gratitude at how a game - this great game - can surprise and inspire us in unexpected ways.

Wonderful piece Tim. This truly is the greatest game. 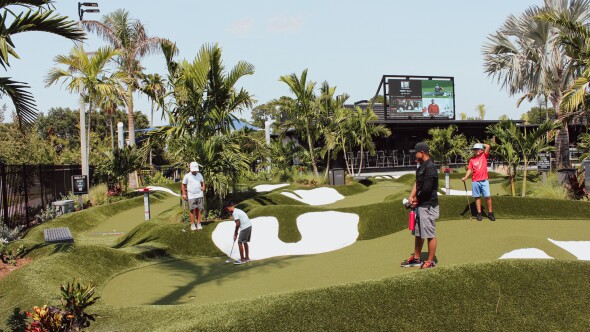