“Priceless” is one of those words that often often gets trotted out, only to end up meaning the opposite of its actual intent. “Priceless” literally means something is without price. It is too valuable to possibly be able to be commercially transacted.

I would have thought that the Titleist irons and wedges Tiger Woods used to win his Tiger Slam – the 2000 U.S. Open, the 2000 Open Championship, the 2000 PGA Championship and the 2001 Masters – would qualify as priceless. Knowing their historical significance, Woods would have held onto them after getting his next fresh set, wouldn’t he?

But in the midst of the best year or so of golf that anyone has ever played, Woods was evidently so singularly, monastically focused on winning the next tournament that when it came time for that new set, at the 2001 Westchester Open, he simply turned them over to Titleist tour reps Rick Nelson and Steve Mata. The clubs stayed in Mata’s possession until 2010 and spent more than a decade in a Houston office owned by businessman. Now, they’re up for bid again, through golf specialty auction house Golden Age.

Got a spare million-plus burning a hole in your pocket? You could own a piece of golf history. Happy Bidding.

If the price tag on Tiger's irons is a little steep, there is currently a set of tickets and badges from 81 of his 82 PGA Tour wins (the 2000 Mercedes Championship is the only one missing) available through auction house PWCC. As of press time, the current leading bid is $14,000. 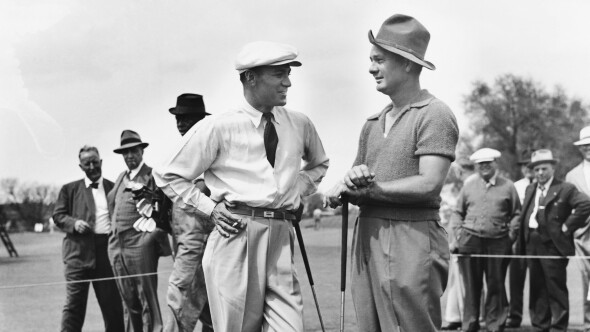 Articles
1 Min Read
Three-time Masters champion Jimmy Demaret's hat game was a Cool Golf Thing
He put it on and pulled it off.