How much time must pass before doing something a very old way becomes, effectively, a new way of doing that thing?

It might be, in the context of a recent tussle between two of college golf's oldest programs.

On October 22 at Saint Andrews Golf Club in Hastings-on-Hudson, N.Y., Yale and Columbia renewed the format of their very first meeting, held on November 6, 1896.

With seven players appearing for each squad, the two Ivies hewed to the seemingly anachronistic format that governed that first encounter: a total-holes-won scoring system where the players on both sides of each match play all 18 holes, even when one would otherwise be closed out. Playing their home course, Columbia avenged their lopsided 1896 loss by beating Yale, 15 holes to 2.

I see some advantages to this way of keeping score, as opposed to the Ryder Cup-style one-point-per-match scoring that dominates team match-play golf. It retains the hole-to-hole rhythms and excitement of match play, but rather than rendering the final several holes meaningless in a blowout, a losing player can still help his or her team by winning a couple late and closing the gap, which could make all the difference in the overall score. Winning one's match remains crucial, but playing hard for 18 holes takes on slightly more importance, too.

If I find myself organizing a large buddies trip in the future, I think I'll incorporate this format for one of the rounds, with the each member of losing team paying the winners a dollar or two per hole of scoring difference, just to keep things interesting. 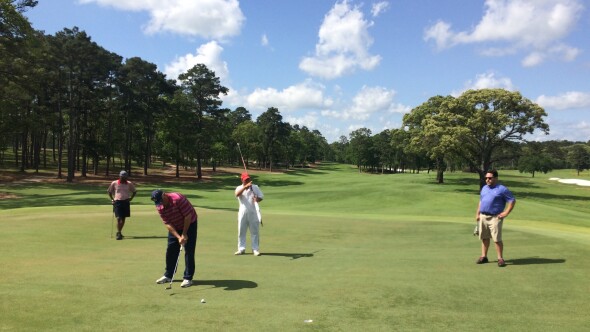 This is a very clever format that would seem to work better than the nonetheless tried-and-true Ryder system. 125 years seems quite a while for a readoption of this long-in-the-tooth scoring system, but hey, necessity is often the mother of renewal (in this case).

It’s interesting to see Columbia, where I played in the 70’s when their home course was Rockland Country Club, now playing at St. Andrews in Hastings-on-Hudson. The course looks to be a slight upgrade, maybe, from what was their former home turf. And their victory over Yale on October 22nd is yet another Cool Golf Thing.