Cuba, Libre? What The Latest News Means For Golfers 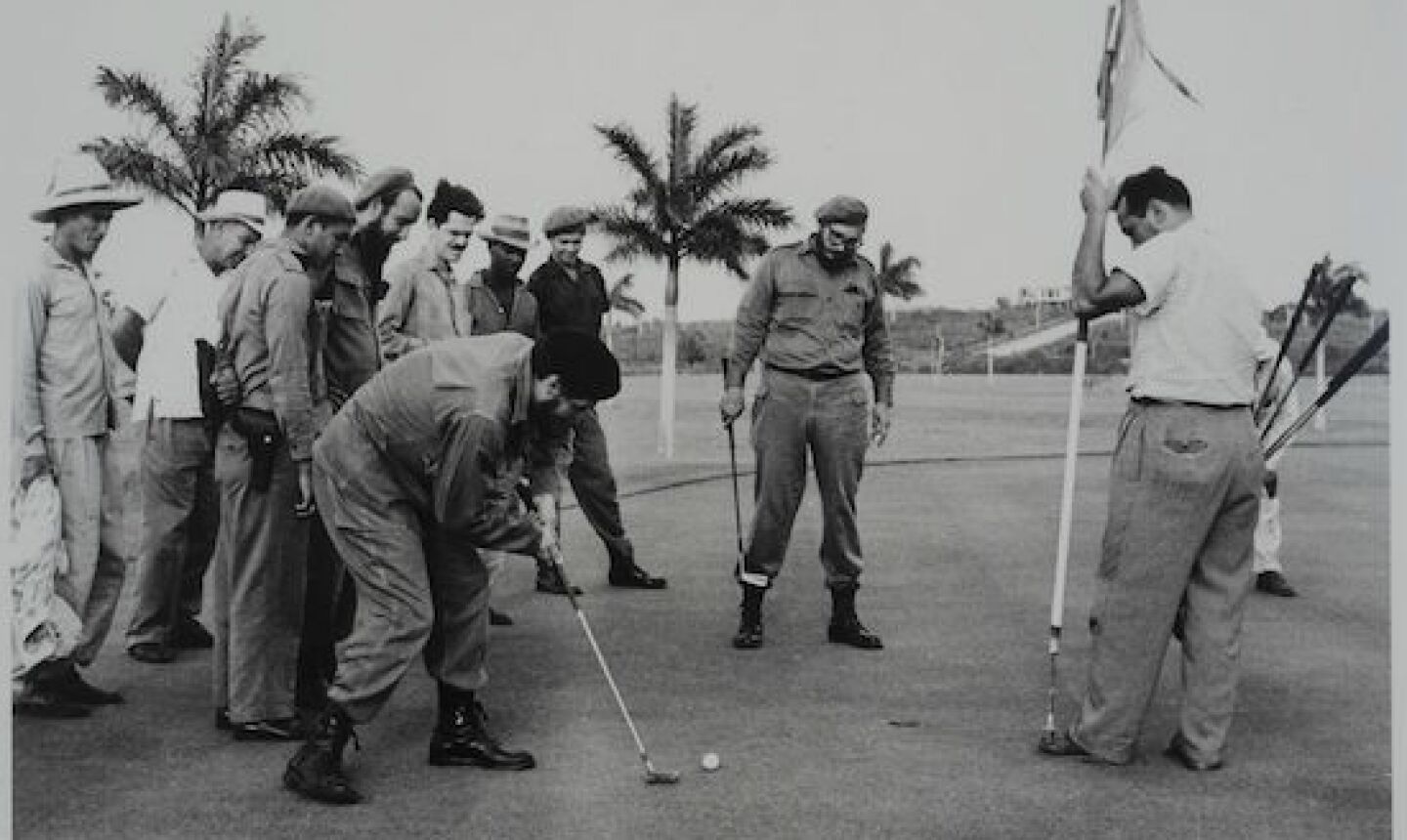 Fidel Castro and Che Guevara once played golf to mock its perceived "bourgeois" and elitist nature. Now, Cuba has a softer attitude towards the game. (Alberto Korda)

You may have heard the news last week surrounding the United States and one of its nearest neighbors and longest-running foes: Cuba.

President Barack Obama announced last Wednesday that he seeks to "normalize relations" with the Caribbean island nation of more than 11 million. So I could not help but wonder:

What does this mean for golfers?

Despite the current thin golf offerings, it turns out Cuba has an interesting history with the game, and that might help indicate whether you should be expecting to tee it up at, say, Trump International Havana anytime soon.

Here are the two important questions and their answers.

What's the history of golf in Cuba?

Before Fidel Castro took over in 1959, Cuba was a vibrant place for tourism, particularly from the US. Havana was a sub-tropical Las Vegas of sorts, with casinos, nightclubs and, yes, a golf scene. In fact, the Country Club of Havana was designed by Donald Ross. So was the Havana Biltmore Golf Club.

The communist revolution of 1959 and the ensuing decades more or less crippled the game, though. Today, there is a relatively pedestrian nine-hole Golf Club de Havana on a different site from either of the plowed-over Ross courses and, about 80 miles to the east, Varadero Golf Club in the seaside resort hub of the same name. Varadero is a scenic modern layout designed originally by Canadian architect Les Furber. The course measures 6,856 yards from the longest set of tees. It hosted European Tour Challenge Tour Grand Finals in 1999 and 2000, won by Stephen Scahill and Henrik Stenson, respectively.

That brings Cuba's golf complement to 27 holes. A $350 million resort called the Club at Carbonera is planned, with no word as to progress; it is supposed to be the first of as many of a dozen luxury golf resorts to be built in Cuba. The developer, the UK-based Esencia Group, has not provided news on the project since June 2013.

If you're Canadian or European, you are able to travel to Cuba as a tourist and have been for years. If you're American, the answer used to be a pretty flat "No way." In the wake of last week's news, however, the answer is more like, "Kinda."

For Americans, there are now a dozen circumstances under which travel to Cuba is permitted. You can read about them all here.  The most important point, though, is that visiting purely as a tourist is still not allowed.

However, if you're truly interested, I may have found a loophole:

It's the Grand Tournament Cuba Golf, scheduled for April 10-12, 2015 at Varadero Golf Club. Yes, that's the same week as the Masters.

Men with handicaps of 24 or less and women with handicaps of 30 or less are invited, and given that the new rules on Cuba include "...public performances, clinics, workshops, athletic and other competitions, and exhibitions..." it looks as if American golf travelers may have a back-door way onto Cuba's seaside course.

Men with handicaps of 12 and less compete in the "Open 1st Category" at medal play, while the other divisions (men with handicaps of 13-24; women with handicaps of 30 and below) will play in a Stableford format. Assuming the potential competition loophole is legitimate, we'd wager that this event might just top these six amateur events in great golf vacation destinations. With an entry fee of $150, which includes a practice round and two tournament rounds, it's quite reasonable (outside of the cost of traveling to and from Cuba, of course).

As Craig indicated, it's not as if Cuba is going to rival the Dominican Republic anytime soon. But if you have an adventurous spirit, you might consider it for more general exploration, with a side of golf.

What are your thoughts on playing golf in Cuba? Let us know in the comments.

Hola
I have played Varadero many, many times.
The people of Cuba are it's greatest asset,and getting to know them on a golf course proved to be very rewarding for me.
In 1999-2000 the PGA European Challenge Tour Grand Final tournament was held in Varadero.
The course can be put in first class shape, however, budgets that are impacting courses worldwide, are tight in Cuba as well.
Best beach in the world.

I am the co-author of Great Donald Ross Golf Courses Everyone Can Play - 2nd Edition (Roman and Littlefield Publishers). I am seeking the original plans of the Country Club of Havana and Havana Biltmore courses and expect to travel to Cuba next year once our Embassy is open and operating a full tilt.
In the next fifty years I predict that there will again be great golf in Cuba, tied to inviting housing and open to public play. Under the present government I do not foresee private courses and clubs being created until there are gradual changes in the governing philosophy there.
Anyone reading this with knowledge of the original Ross plans for the two courses here may contact me at paulandbj [at] nc [dot] rr [dot] com
Paul Dunn
Pinehurst, NC
910 235 0397

Get rid of the women who "run" the pro shop

The golf course is quite good for the price - but the women who work at the place where you pay for the golf are obnoxious, arrogant, huffy and rude individuals - the exact opposite of the Cubans. I have never encountered such socially inept staff at any golf course anywhere in the world. Their lack of social skills should be recognized by the golf course manager and the government. They are responsible for the disenchantment of tourists who wish to play golf in Cuba. Can the course manager not get rid of them?

Do I trust Americans to much or are Americans realy so thrustfull? I go for the last choice. And so...I believe all they try to tell me.

No desire to go. Many places to play right here. Would play in Cuba, MO.

What about Guantanamo Bay? Supposedly at one time it was the best in the Caribbean. Now you have to bring your own turf. If they turn the water back on, it would probably take little time to get it back in shape.

Golf in Cuba without hesitation. Why wait? Go again down the road to see how time has changed/improved it as a destination in general. I love the adventure of golfing outside the US. Aruba, Costa Rica and the DR so far. I just may have to plan some time for that tourney in April...Who needs to watch the Masters when I can make my own "Major" adventure!

Not in my lifetime but only because I am too old now-my expectation is that given what we have just seen that in 15 years there will be lots of golf in Cuba for the moderately well-to-do tourista. So good!! Do it!

By Tim Gavrich
Read More
Load More
Popular
5 fitness tips to help improve your golf game this offseason
Hilton Head remains as reliable as any Southeastern golf destination
Secrets From The World of Golf Travel: December 2022
The five best courses you can play on the LPGA Tour
Editorial Staff