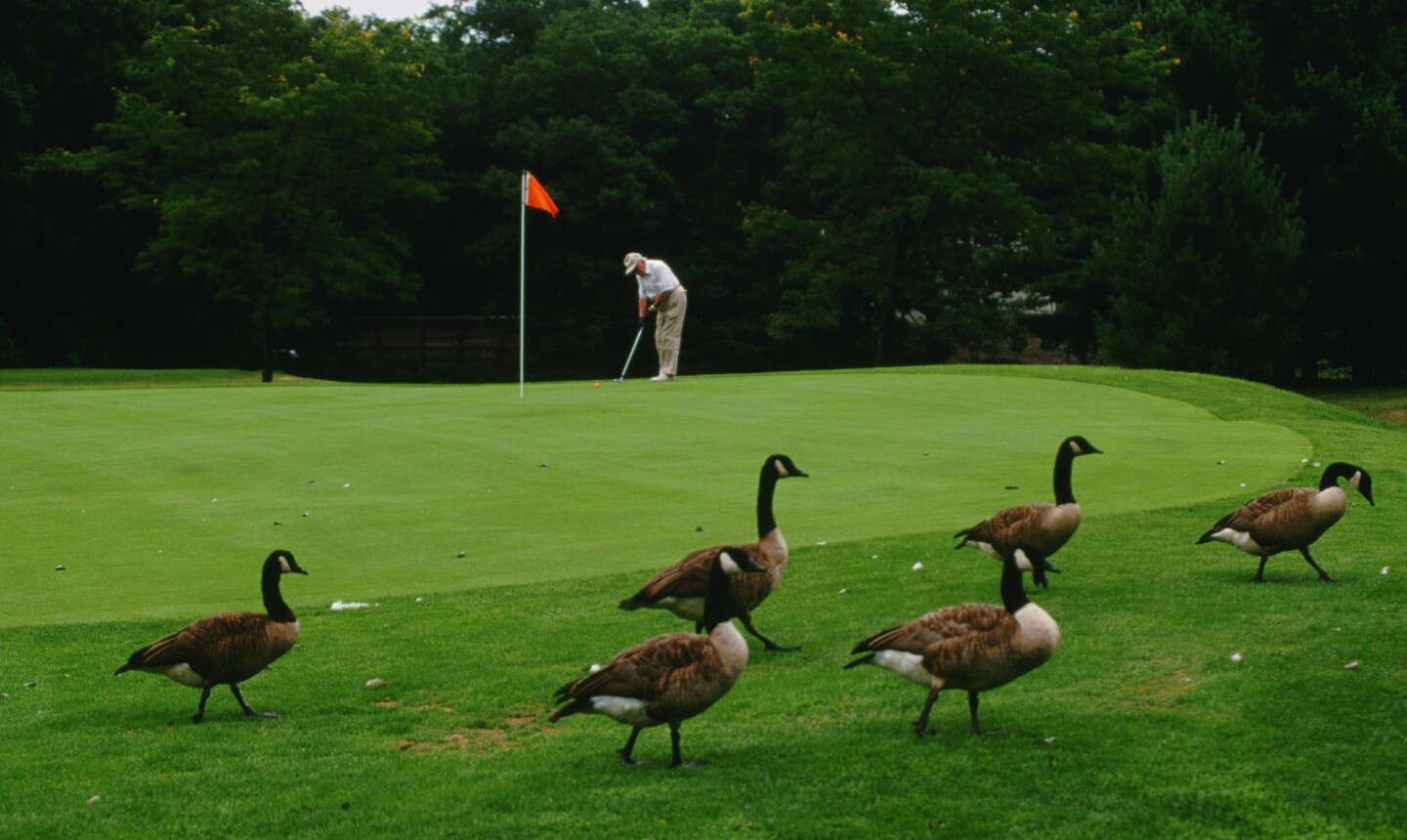 Geese are a nuisance on every golf course. Courtesy of Getty Images

The West Essex Golf Club 15 minutes outside of London is stuck in the middle of one of golf's oldest turf wars: Greens vs. Geese.

An article in The Sun indicates members and local residents are upset over the club's plan to kill geese that are fouling up the fairways and greens of the hilly James Braid design dating all the way back to 1900.

The report noted that gunmen hired by the club will mount an "aggressive campaign and try to shoot three or four on several evenings." One person interviewed by the Sun said: "I certainly don’t want these birds killed in the name of golf." The club insists that it has the proper permits and that many other courses handle geese this way under the law.

Apparently, the goose problem has been getting worse over the past three seasons, although none of the three reviews of West Essex posted on Golf Advisor since 2017 mention anything about goose droppings.

Geese are a nuisance for almost every golf course with a pond, especially those courses along migratory pathways. More than 800 reviews in the Golf Advisor database feature complaints about geese. Here are a few recent ones:

* "The geese and coots had their way with a few fairways. Stupid filthy birds. But, what can you do about that?! Anywhere there are ponds you will have these stupid poopers." review by user trogersaz1 about the Hillcrest Golf Course at Sun City West in Phoenix.

* Lots of geese and accompanying mess." review about the Links of Lowell in Arkansas.

* "Mother nature brought in literally hundreds of geese and droppings were a problem." review of the Palm course at McCormick Ranch in Scottsdale.

* "Geese, coots and pigeons all over so poop everywhere. There is absolutely no more pride left at this course and it's too bad. Used to like playing here. I would like to say you get what you pay for but you don't." review of the Villa De Paz Golf Course in Phoenix.

* "Issue I have is tons of geese poop. And not just a few holes but like 8 of 9 holes you are walking through poop." review of the Fremont Park Golf Course in Fremont, Calif.

According to a blog at www.birdbgone.com - a company selling "bird control products" - a single goose can produce up to four pounds of droppings in a day. It recommends products that can scare away geese instead of shooting them - a sonic device that emits goose distress calls at various intervals, visual deterrents that look like predators and move in the wind or a non-toxic liquid spray deterrent that irritates their senses.

Many course superintendents bring their dogs to work, not just for company, but to manage the goose population as well. Even decoy dogs have been known to work, according to this article in the Minneapolis Star Tribune. Trained dogs might be the best solution.

Win a dog at the Golf Industry Show in San Antonio? Yes, one of these border collies from @Flyawaygeese would make a nice addition to any golf course with a goose problem. These adorable pups start around $5,000. @GCSAA @GolfAdvisor @GIS_2018 pic.twitter.com/jMDP7GVhlx

So what's your take on the plan in place at West Essex? Should the club stand down from its "aggressive" plan to kill the birds? Should it invest in "bird control products"? Want to share your story about a course struggling with geese? Tell us in the comments below.

Jason Scott Deegan
Jason Scott Deegan has reviewed and photographed more than 1,000 courses and written about golf destinations in 20 countries for some of the industry's biggest publications. His work has been honored by the Golf Writer's Association of America and the Michigan Press Association. Follow him on Instagram at @jasondeegangolfpass and Twitter at @WorldGolfer.
23 Comments

There's a more humane way to do it. In Canada, they use dogs to get rid of geese on the golf courses.

once told by head grounds superintendent at Teal Bend golf course in Sacramento,calif. that if you can identify and place a matriarch ,and patriarch goose on a pond they will drive off the newcomers, he also used a border collie to drive the geese into the water ,knowing that they feed on land, if driven into the ponds long enough they will leave.

We had them on our course and we put statue's of Bashers around and the Geese left.

We had Geese on our course and we put a statue of a Badger around the green and no more Geese. They are afraid of Bashers.

Another problem with geese poop. I contracted Salmonella last year after playing golf in Arkansas.
Health Department said I probably got it from handling a golf ball that had been around the poop.

Geese dont play golf and dont know the difference between a golf course or the neighborhood lake.
Leave them alone and get a dog .the dog would have fun, and the problem would be solved.humans always think that they are privileged. Take up skeet shooting!

Next people are going to give the geese driver licenses, allow them to vote and draw welfare!

We have controlling deer hunts to thin the herds. If it is done on that basis then perhaps it could be a solution when detergents fail. The thing with detergents however is the geese just go somewhere else to be somebody else's problem.

In response to Mike B. Trump should include geese in the NAFTA talks. Canada will stop exporting geese in exchange for the right to export other products

West Essex is an overpriced Dump, shoot the birds and it'll have practically NO visitors!! What an elegant solution from a cerebrally challenged golf club. Goose droppings...... Yeah that's the problem with we Essex