Enjoy a day at the beach at Portsalon Golf Club in County Donegal, Ireland 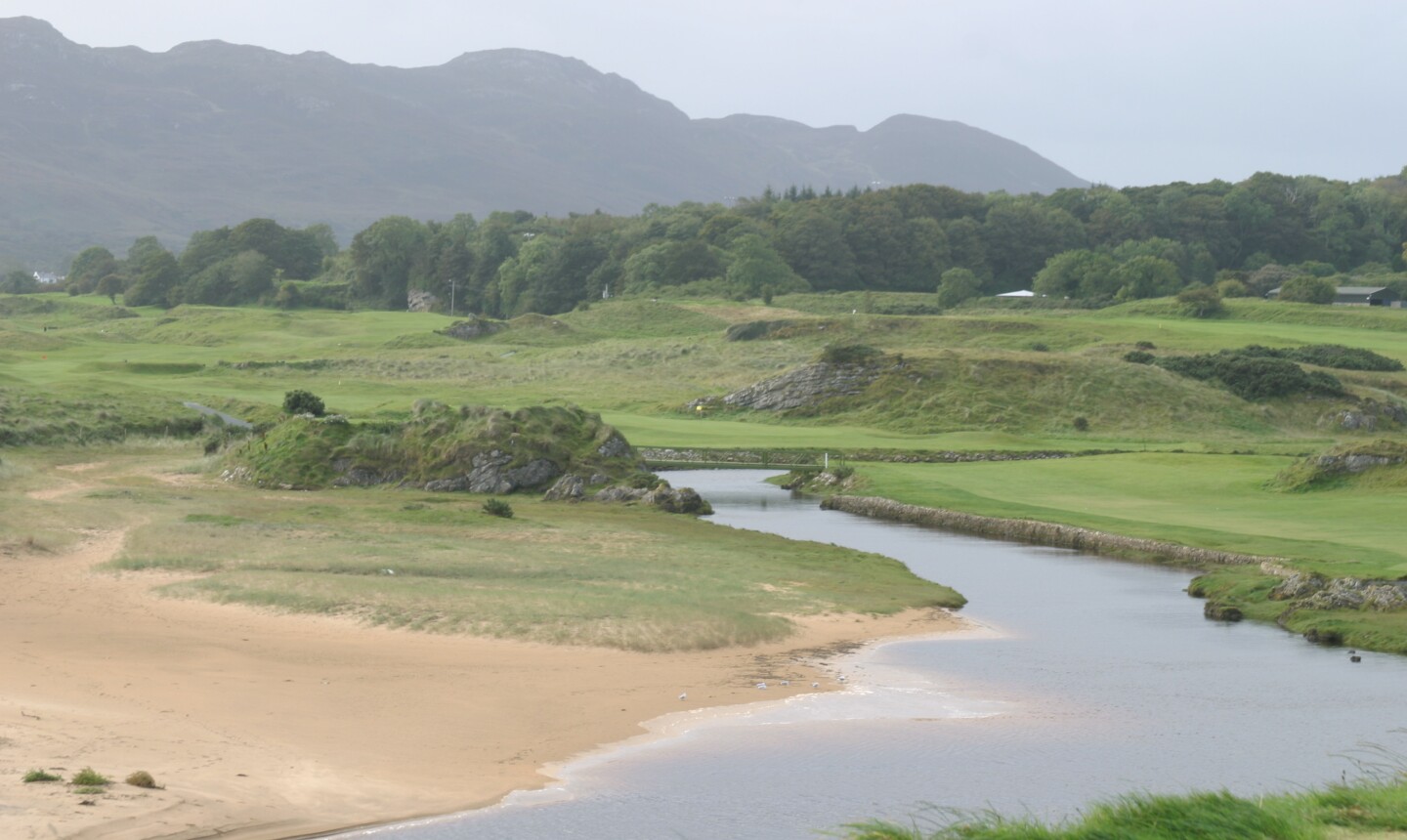 The second hole at Portsalon Golf Club is celebrated as one of the best par 4s in Ireland. Jason Scott Deegan/Golf Advisor 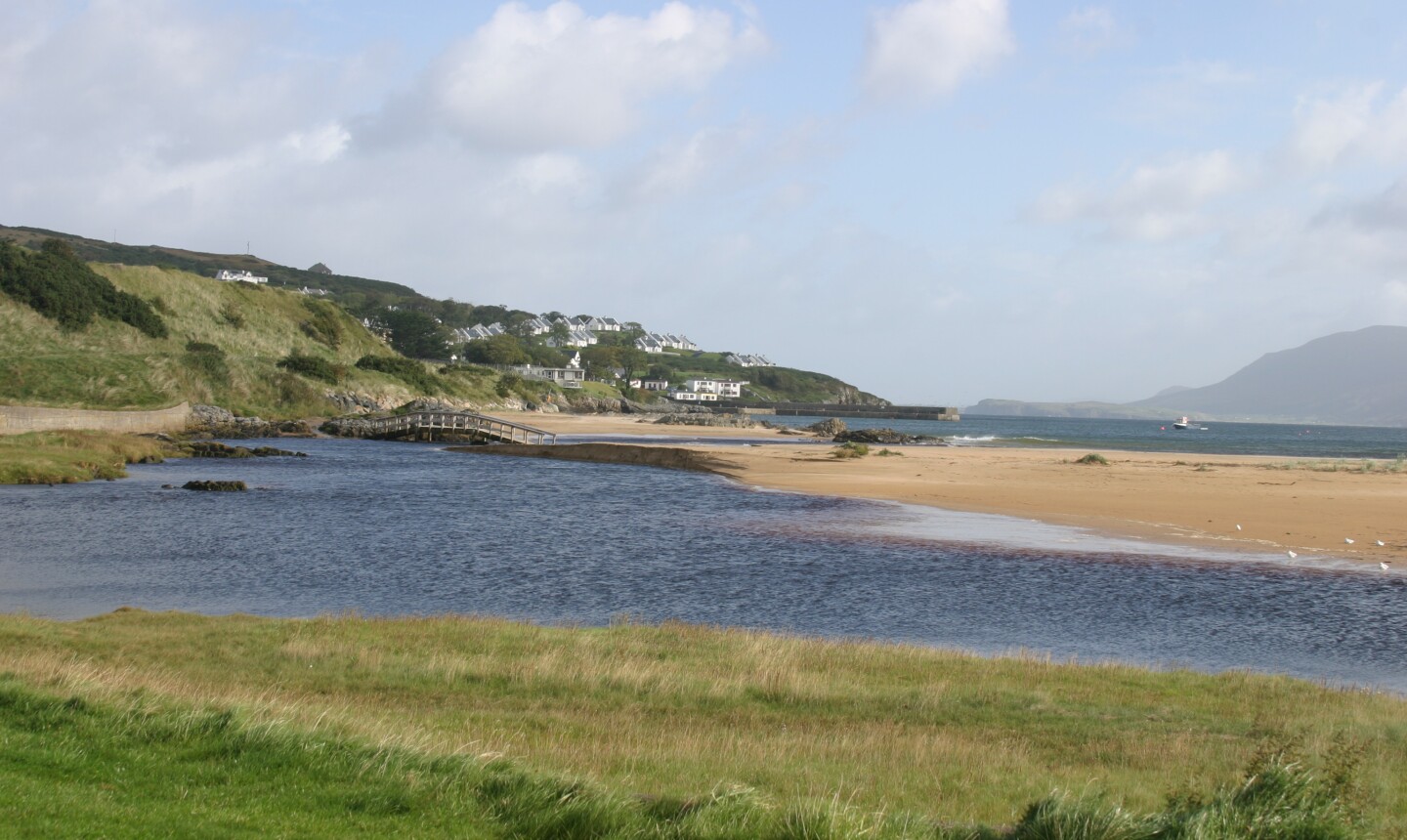 The beach bordering Portsalon Golf Club is considered one of the best in the world. Jason Scott Deegan/Golf Advisor 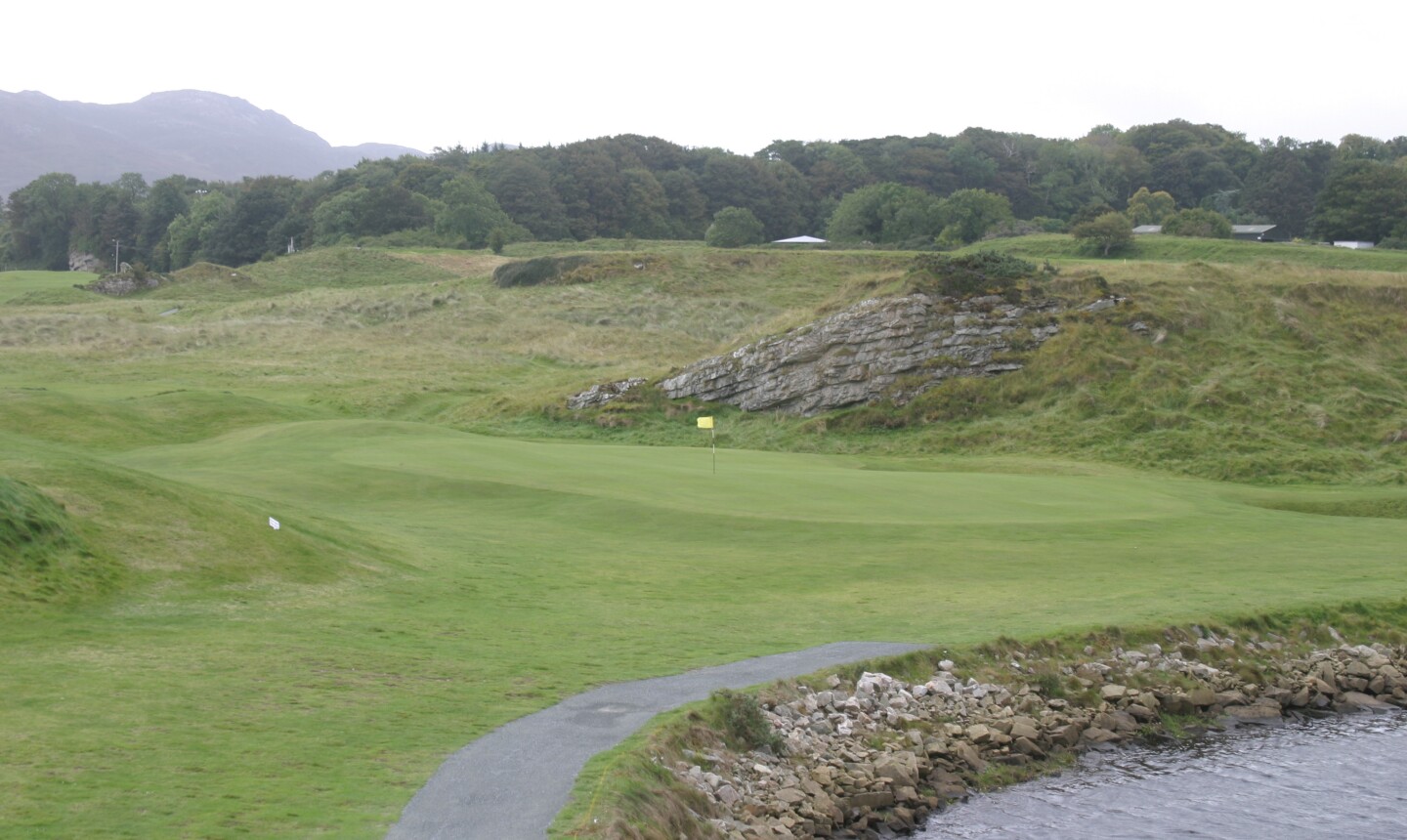 The second green at Portsalon Golf Club is protected by a river and rock formation. Jason Scott Deegan/Golf Advisor 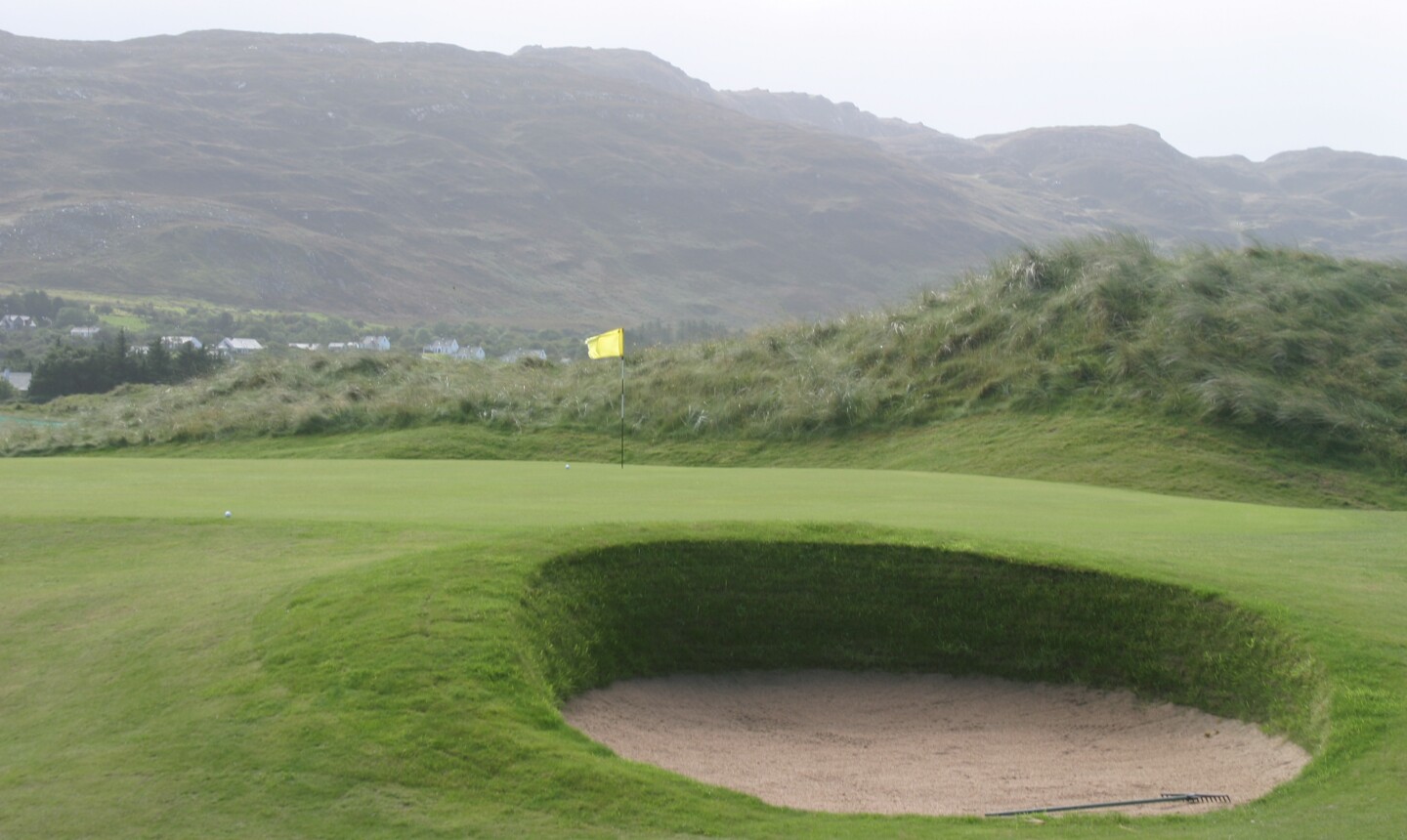 The golf course is equally challenging and fun to play. The surrounding seaside views of the Lough Swilly and the Knockalla Mountains are exquisite, highlighted by the Ballymastocker Bay beach some consider among the most beautiful in the world. And in true Irish tradition, the membership is friendly and unpretentious, always ready to host visitors for a game or a pint in the clubhouse.

The members are ferociously proud of their golf course, as well they should be. The course's website proudly states it was rated 45th by Golf Digest Ireland among the top courses in the country in 2009 (Another outlet, www.top100golfcourses.co.uk, rates Portsalon No. 36 in Ireland).

To most visitors those rankings don't do justice to how good a day at Portsalon can be. Portsalon can be hard to find near the tip of the Fanad Peninsula, but it's easy to love. Call it a hidden gem or off-the-beaten cart path or whatever you like. Considering the green fees are just 50 Euros on weekends, Portsalon might be the most value-laden links in all the British Isles.

"The value for the money is great on that golf course," said Cathal Toland, the secretary manager.

Chuck McDonough, a Chicago-area resident who has been to Ireland a handful of times, said Portsalon exceeded his expectations after a round this summer.

"Portsalon, that was a very pretty golf course, one that I had not read a lot about," he said. "It was challenging, especially the front nine. The fairways were tighter than most links courses. It was very natural. It was nice you get to see the bay and the mountains. Looking back at the town on a bluff, it was very striking."

Portsalon is ripe for discovery by international travelers. A new bridge, the Harry Blaney Bridge, opened in 2009, connecting the Fanad Peninsula with the Rosguill Peninsula, cutting the drive time between the Rosapenna Hotel & Golf Resort and Portsalon in half. That should open the door for more visitors staying at Rosapenna (or traveling to the resort from the east) to find this links treasure.

Portsalon Golf Club has a storied history dating to 1891 as an original founding member of the Golfing Union of Ireland, the oldest golf union in the world. Originally designed by Royal Portrush golf professional Charles Thompson, the course measured a meager 5,611 yards and featured dangerous cross-over holes at three places … the fourth with the 15th, the 11th with the 12th, and the 16th with the 17th.

Finally in 2000, the club commissioned a redesign by Irish golf-writer-turned-architect Pat Ruddy, now famous in County Donegal for his Glashedy Links at Ballyliffin and Sandy Hills Links at Rosapenna. Ruddy left only five holes unchanged at Portsalon, crafting a test of 6,200 meters, or roughly 6,850 yards. (The club still uses meters for all its markings.) Nine totally new holes were introduced and four others were given interesting new dimensions and playing characteristics. Two double greens -- the third and ninth, and the fourth and eighth -- helped the club maximize distance.

No change personifies just how far the club has come than the second hole. Ruddy discarded the old par 3 and built a 430-yard par 4 that is considered among the best in the land. From an elevated tee, it takes a heroic drive over a river (and an out-of-bounds wall) to a fairway pinched by mounding on the right. The approach shot is even more dramatic over the same river to an inverted saucer of a green next to a massive rock formation.

The old ninth hole became the sixth, an excellent par 4 along the shore extended by more than 160 yards, thanks to a new tee and green tucked into the dunes on either end. Castle ruins were unearthed during construction of the par-5 eighth, but they were covered over to become another challenging dune worth avoiding.

The back nine navigates higher ground away from the dunes, playing more like a parkland course. This gives Portsalon a sort of hybrid feel. The finishing holes, starting at No. 14, are all originals, playing as they have for a century or more.

At the par-4 14th called Matterhorn, the elevated tee sits at the highest point on the property, set above the 13th green, unleashing panoramic views in all directions.

A blind drive over a ridge on the par-4 16th hole reveals the green well below the fairway and tucked behind a stream. The par-5 17th climbs dramatically uphill after a hard dogleg to the left. The finishing hole demands another uphill approach over a stream to a green revamped by Ruddy.

The only knock of Portsalon Golf Club comes from the awkward fencing that dissects the first and 18th fairways. It protects an underground tunnel used by the public to access the beach. Before the club paid to dig the tunnel, players actually had to wait for beachgoers crossing the fairways. The club someday hopes to address the issue. It continues to consult on potential future changes with its biggest supporter, Paul McGinley, the 2002 Ryder Cup hero and 2010 assistant Ryder Cup captain.

Portsalon Golf Club isn't a pure links all the way through like its nearest neighbors, the 36-hole Ballyliffin Golf Club and the 45-hole Rosapenna Hotel & Golf Resort. Even so, the price for a round at Portsalon can't be beat. With no real accommodations near the golf club, most international golfers visit the course while traveling to or from Ballyliffin or Rosapenna. The spectacular scenery at Portsalon, however, makes the trip worthwhile. 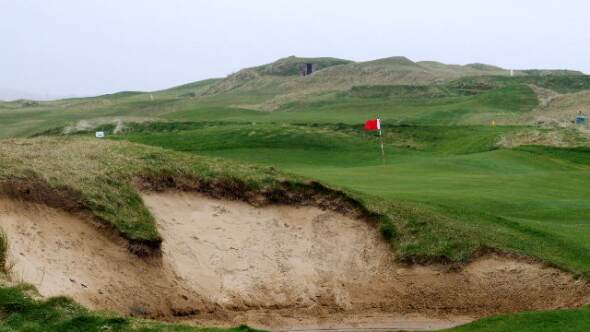 Articles
Travel-planning tips for your Ireland golf vacation
If the British Open didn't get your motor running for a golf vacation, maybe the Irish Open will. There is still plenty of time left this summer to plan a golf trip to Ireland. If you looked at Ireland golf vacation prices a few years ago, it's time to look again. Here are some tips to help get your trip started.
3 Min Read

Tim Gavrich
Senior Writer
Now Reading
Enjoy a day at the beach at Portsalon Golf Club in County Donegal, Ireland
Search Near Me