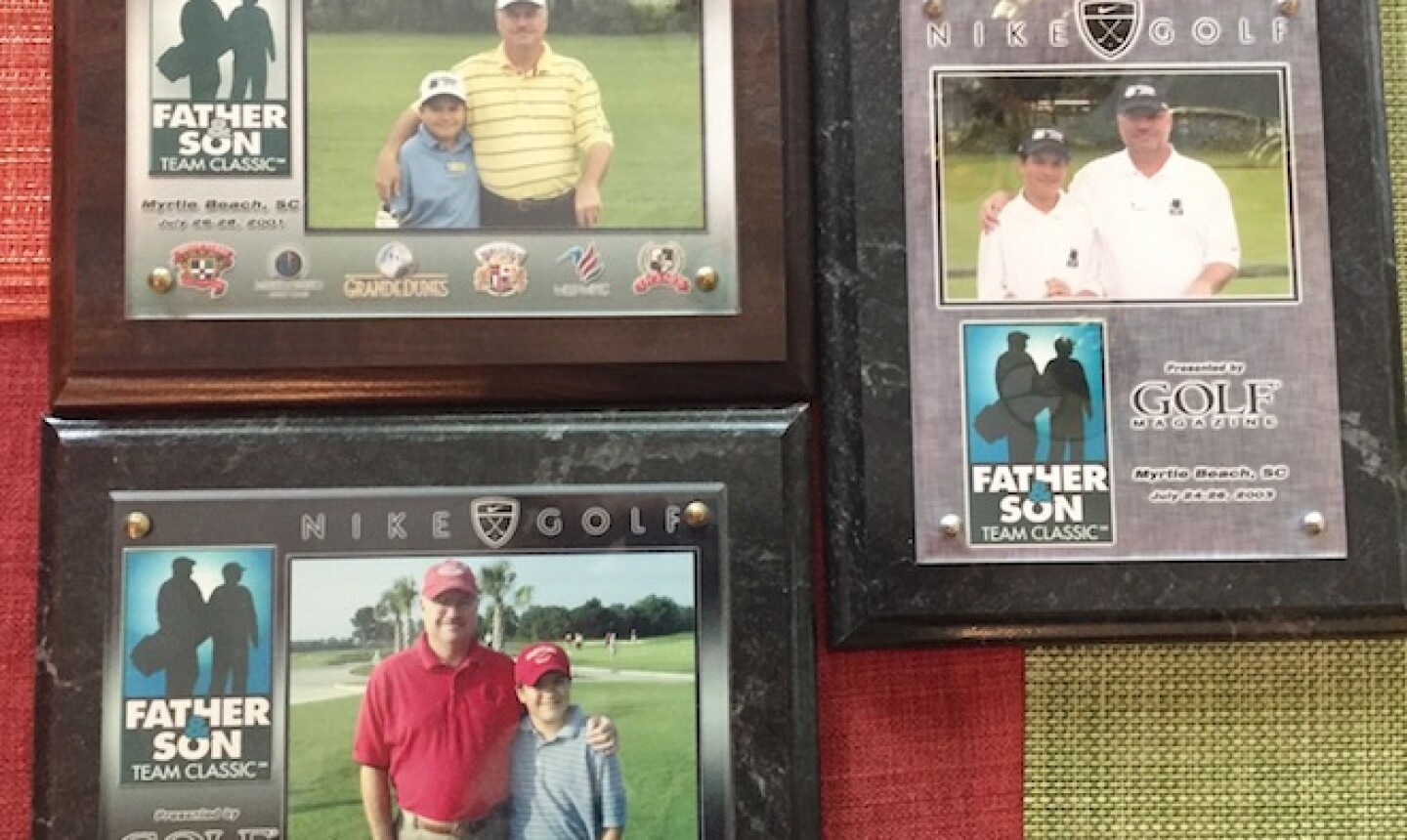 Having grown up in large part on the golf course, my dad has always been a big supporter of my game.

My dad is the reason I play golf. He took up the game in his childhood in New Jersey and has been an avid player ever since. His handicap has hovered between 8 and 11 for my entire life.

While I was growing up, he worked for a large multinational corporation. In his place of business, as in most, many people across the organizational were golfers. So golf was both a leisure activity and a business aid for him.

He got me hooked at age six, as we'd hit balls and then play the first two holes at the suburban club we belonged to. Then nine holes. Then 18. My first taste of competitive victory on the golf course was with Dad, in the annual club Parent/Child tournament when I was seven or eight.

Playing golf with my dad thrust me into the world of adults from an early age, because once I started showing some level of ability, I ended up accompanying him on casual rounds of golf with some of his colleagues. I had to be polite and well-behaved in order to continue being allowed to hang out in that world. He disregarded the divide between generations that has tended to exist on golf courses, which helped me learn to interact with people both older and considerably more powerful than myself.

For seven years we played in the Father & Son Team Classic, a three-day event held every year in Myrtle Beach, and I was often the youngest competitor in our flight and one of a small handful of young kids in the field of hundreds of teams. Many other, older father-son pairs probably initially rolled their eyes when they saw I'd be in their group, but I'd like to think I impressed them by playing fast, adhering to golf etiquette and generally behaving like an adult. I have my dad's trust in me to thank for that.

Here are some other golf-with-dad reminiscences from the Golf Vacation Insider circle:

My dad and I approach golf very differently. He considers any water hazards, bunkers, sloping fairways, etc., to be cruel and unusual punishment inflicted by a "diabolical" architect.&nbsp; I consider them fun and interesting challenges. He gets upset if he loses a ball...that he found. I just grab another one from the new sleeve I overpaid for in the pro shop. Yet while playing, he remarks about the hard work of the greenkeepers; he is always considerate of the groups behind us; he never fudges his score; and he’s happy to go out with beginners who want to get (or get back) into the game. So, while playing golf highlights our differences, the spirit of it reveals how similar we really are.

One of the most special things about golf has been getting to share it with my son. In fact, he is about to graduate from high school and we are taking a father-son trip to Scotland to celebrate - and yes, I expect to win our trip-long match!

I actually found out I was going to be a dad for the first time on Father's Day. This was back in 2009. I was blogging about the US Open at Bethpage that year. I got caught in the 100-year rain storm the day before the tournament started, and for the rest of the week it was almost impossible to keep your feet dry. The whole place was just mud. Between that and the long hikes through traffic up and down the LIE [Long Island Expressway], by Sunday I was sick as a dog. I stayed home and watched the (not-to-be-completed) final round on TV, flat on my back on the couch. I remember Mickelson was putting when my wife came in and told me I was going to be a dad. I was incredibly happy, of course, but my first thought was, "Man, I'd better get my life&nbsp;together!" It's an open question whether that ever happened, but so far, so good!

What are your favorite memories of Father's Day golf (or any rounds) with your father or, if you're a father yourself, golf with your children? We'd love for you to share them below!

We were down at Myrtle Beach for my brothers 40th birthday along with my dad and my brother in law. Upon playing one hole my father was about to hit his fairway shot when my brother in law said , I bet you $20.00 he hits the electrical box , which was almost straight across from my father and which would have meant he had to hit his fairway wood almost sideways. I said I'll take that bet . My dad then proceeded to hit his ball sideways and hit the electrical box, thus sending me and my brother in law to the turf in laughter. He wasn't pleased until he heard about our bet, then he just laughed along with us.

My Dad played golf most of his life and shared the game with me. We played together and watched the PGA on TV often. He never took golf vacations as he worked very hard and was dedicated to family. When he turned 70 I was able to take him to Pebble Beach in March 1992 just before the US Open was played there. We had a wonderful and bonding time. Back home for in Savannah we were able to watch the pros play Pebble in June. He held his score card in one hand and the yardage book in the other and enjoyed being able to say " I pared that hole and that guy just bogeyed!".
Not long after, his health began to fail and was not able to play much but we always shared our memories together at Pebble Beach.