And while relentless brutality (and greens that allegedly can run at 17.5 on the Stimpmeter) can be fun to play once in a while as a bucket-list experience, it's safe to say that most golfers probably prefer a bit gentler, more charming challenge as an everyday club.

Enter Steel City's longtime #2 venue, Fox Chapel Golf Club. A Seth Raynor design circa 1925, Fox Chapel has a modest but still respectable tournament-hosting pedigree of its own, including three installments of the Senior Players Championship from 2012 through 2014.

Soon after, the club sought professional counsel in order to bring the course back to its Golden Age glory from a seemingly unlikely source: Fazio Design. The Fazio name is much more associated with new-build modern golf than the restoration of classics, but design associate Tom Marzolf, who led the Fox Chapel project, has considerable experience with similarly historic layouts, including pre-U.S. Open tune-ups for Oakmont and work at the George Thomas gem and perennial PGA Tour host Riviera Country Club.

At Fox Chapel, the brief was clear: bring the features back to Raynor's original design. "It is not an interpretation, it’s truly putting Raynor back on the ground," said Marzolf. "Seth Raynor is once and forever the architect of Fox Chapel.” 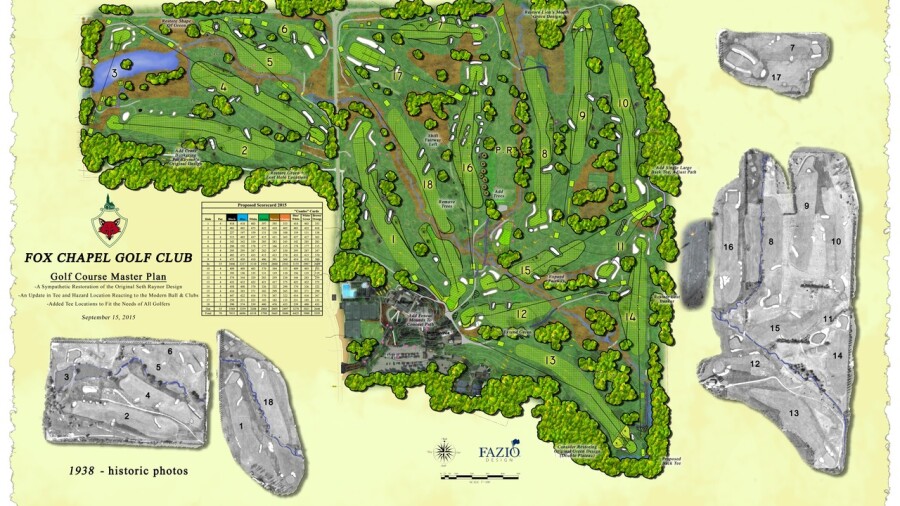 FERAL PIG MENACE...ARCHERY ON THE GOLF COURSE? - A booming feral pig population in California is creating problems at San Jose-area golf courses. The general manager of Coyote Creek Golf Club and the superintendent Silver Creek Valley Country Club have both reached out to the city council, claiming the pigs have caused more than $10,000 in damage to each of their respective golf courses. One suggested solution is to allow hunters to shoot offending swine with bow and arrow so as to limit the population and spare golf courses and other property further damage. [LINK: ABC News 7 San Jose]

NO MORE SINGLE-RIDER CARTS? - At The Villages, the retirement community mega-complex in central Florida, the more than 30 golf courses have begun to relax COVID-19 restrictions. No more than two golf carts may be used by a group, flagsticks are now allowed to be removed for putting and foam and PVC inserts have been removed from cups. [LINK: Villages-News]

"WE DON'T DO BOUGIE" - Wilmington, N.C. is known for one of the South's most vibrant craft beer scenes, and the owners of the popular Ironclad brewery are adding golf to their portfolio. Belvedere Golf Club, which closed a couple years ago, will be revived as part of a new location and events venue for Ironclad. "We're not going to be a country club," said investor Brandon Noel. "We don't do bougie; we do fun." [LINK: Port City Daily]

GOLF-ADJACENT - "A club [sandwich] is not the kind of thing you make yourself, despite the fact you likely have all the necessary ingredients on hand. It’s just not as magical if you stick in the little toothpick just to take it out again. Rather, a club is something that’s best served to you by someone else, at a country club, a hotel restaurant — or, better yet, in bed (that ultimate luxury)." [LINK: Eater.com]

Is your local course in the news? Got an inside tip to share with us? Click here to reach out.