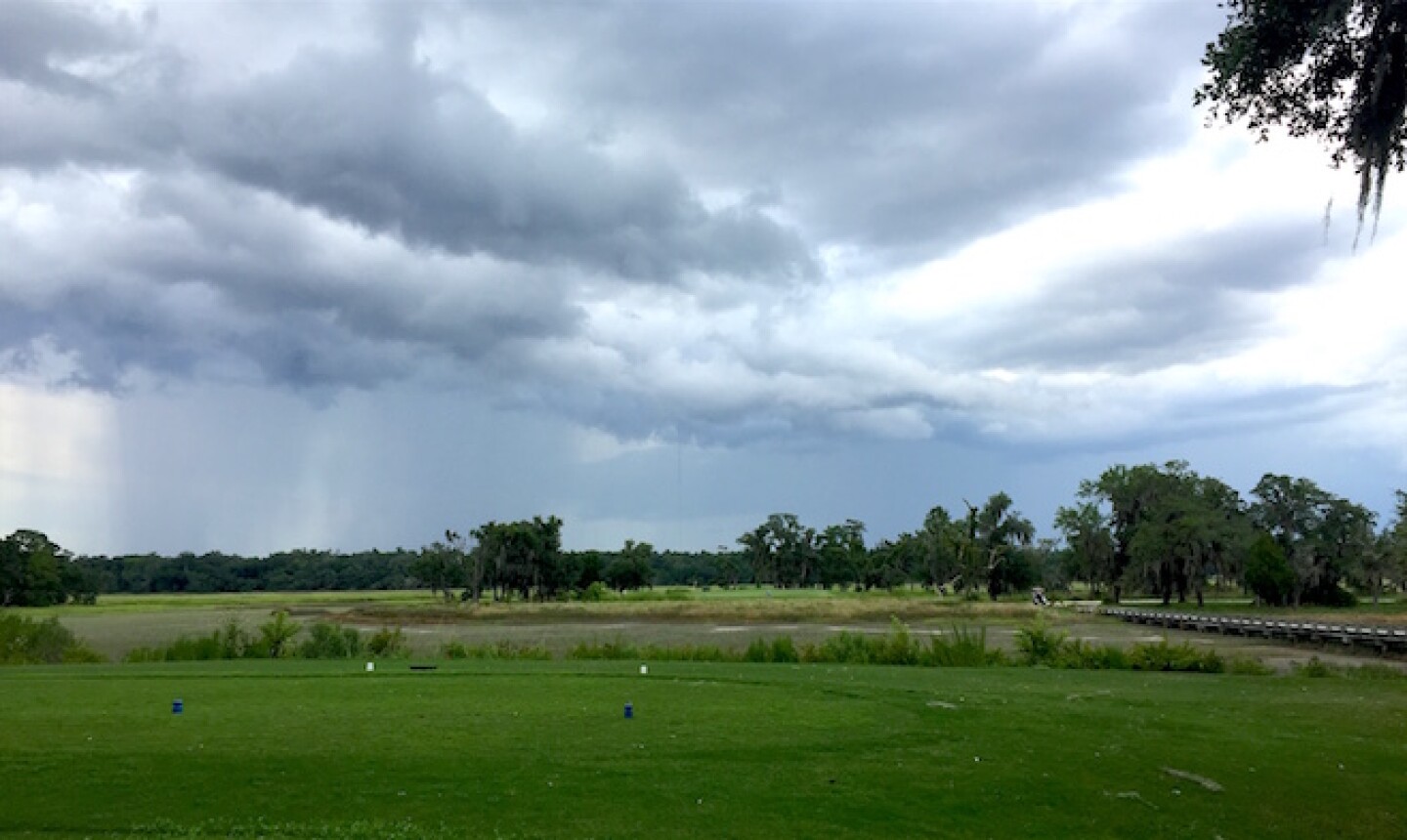 The penultimate hole at Sapelo Hammock is a par three that plays to a naturalistic island green surrounded by marsh.

Consider this a periodic Golf Vacation Insider series highlighting some of the less high-profile golf courses we've encountered on our travels. You probably won't see them high on any "Top-100" lists, but if you're looking for a true sense of the diversity of golf experiences, you'll want to read on.

When someone mentions "Coastal Georgia golf," most people are going to think of one iconic resort: Sea Island. Maybe Jekyll Island, too. And if they're Savannah fans, Westin Savannah Harbor will probably come to mind as well.

But Sapelo Hammock Golf Club in the community of Shellman Bluff? Not so strong in the name-recognition department.

Every year, thousands of golfers must travel south on I-95 on the way to Sea Island and blow by Exit 67 with practically no idea that about 15 minutes east of the exit, down some quiet roads shaded by live oaks lies an absolute hidden gem of a golf course. It may not make any "top-100" lists, but if you enjoy solid golf, gorgeous scenery and incredibly nice people, you'll like Sapelo Hammock.

It's pretty. Most of the golf course sits on a peninsula of land bordered by expansive marshes bordering Blackbeard Creek, which meanders out toward Sapelo Island and the Atlantic Ocean beyond. The eighth, ninth, 17th and 18th holes are particularly lovely. Throughout the rest of the course, live oaks dripping with Spanish moss abound.

It's a community in the true sense of the word. There are homes situated along many of the holes at Sapelo Hammock, but they are set back from play and won't interfere with your round. Their inhabitants are so proud of their course, so much so that they regularly help the superintendent and his crew by laying sod and doing other odd jobs that help keep the course in lovely condition, despite a relatively low budget. As a result, everyone seems to know everyone else, which gives the place the feel of a private club, despite being open to the public. When the original developers of the course sought to sell amid the economic downturn a few years ago, a cadre of 95 residents pooled resources and bought the course and nearly 100 unsold homesites. The member-owners are optimistic but eager to welcome new members into the fold.

It's a steal. Green fees at Sapelo Hammock max out at $45. When I played it one afternoon earlier this summer, I paid less than $30.

It's a professional golf host venue. This week, the SwingThought Tour (an East-Coast tour one step below the Web.com Tour) will play a four-day event at Sapelo Hammock. Current PGA Tour rookie Patton Kizzire is a past champion.

You can stay over the course...literally. A number of condos on the course are available for rent on a stay-and-play basis, but the most prized unit is the "Eagle's Nest," a two-bedroom space in the top floor of the clubhouse. Call it Sapelo Hammock's answer to Augusta National's vaunted Crow's Nest. Except this one's open to all - it's $200 per night and sleeps four - and incredibly well-priced.

It's a subtle beast. The golf course won't beat you up, but it will sneak up on you in places, thanks in large part to a very stout collection of par threes. The toughest of them all may be the 15th, which doesn't look like much but whose crowned green is incredibly tough to hit and hold. Many other holes look more innocuous than they end up playing.

What does "Sapelo" mean, anyway? It's a Native American place name. Spanish missionaries explored the Georgia coast as early as the 1570s and named the area "Zapala."

I live in the next county North and visit Sapelo Hammock, regularly. Love the course and right now it is in the best condition I can remember, really nice.

Brilliant Course! While not in pristine condition, the routing is amazing. The tee shot on Hole #3 is a beast. I had such a great time. Only caveat - bring bug spray. The afternoon flies in May made me hustle around the course.

Rusty Simmons may not be a household name among designers, but he's worked on some fun coastal GA courses, including Crosswinds Golf Club in Savannah (another fun course located at the airport). Great guy to work with. Love Sapelo Hammock.

Great track and glad to see it get some well deserved recognition. You can also get there going north on 95 at exit 58 so save some extra time on your trip on the coast and play it. I live south of Brunswick and it's certainly worth the few hour diversion to play. Kira K. Dixon
Lifestyle Correspondent
Now Reading
Hidden Gem Alert: Sapelo Hammock Golf Club
New Cookie Policy
WE AND OUR PARTNERS USE COOKIES ON THIS SITE TO IMPROVE OUR SERVICE, PERFORM ANALYTICS, PERSONALIZE ADVERTISING, MEASURE ADVERTISING PERFORMANCE, AND REMEMBER WEBSITE PREFERENCES. BY USING THE SITE, YOU CONSENT TO THESE COOKIES. FOR MORE INFORMATION ON COOKIES INCLUDING HOW TO MANAGE YOUR CONSENT VISIT OUR COOKIE POLICY.
CONTINUE
Search Near Me