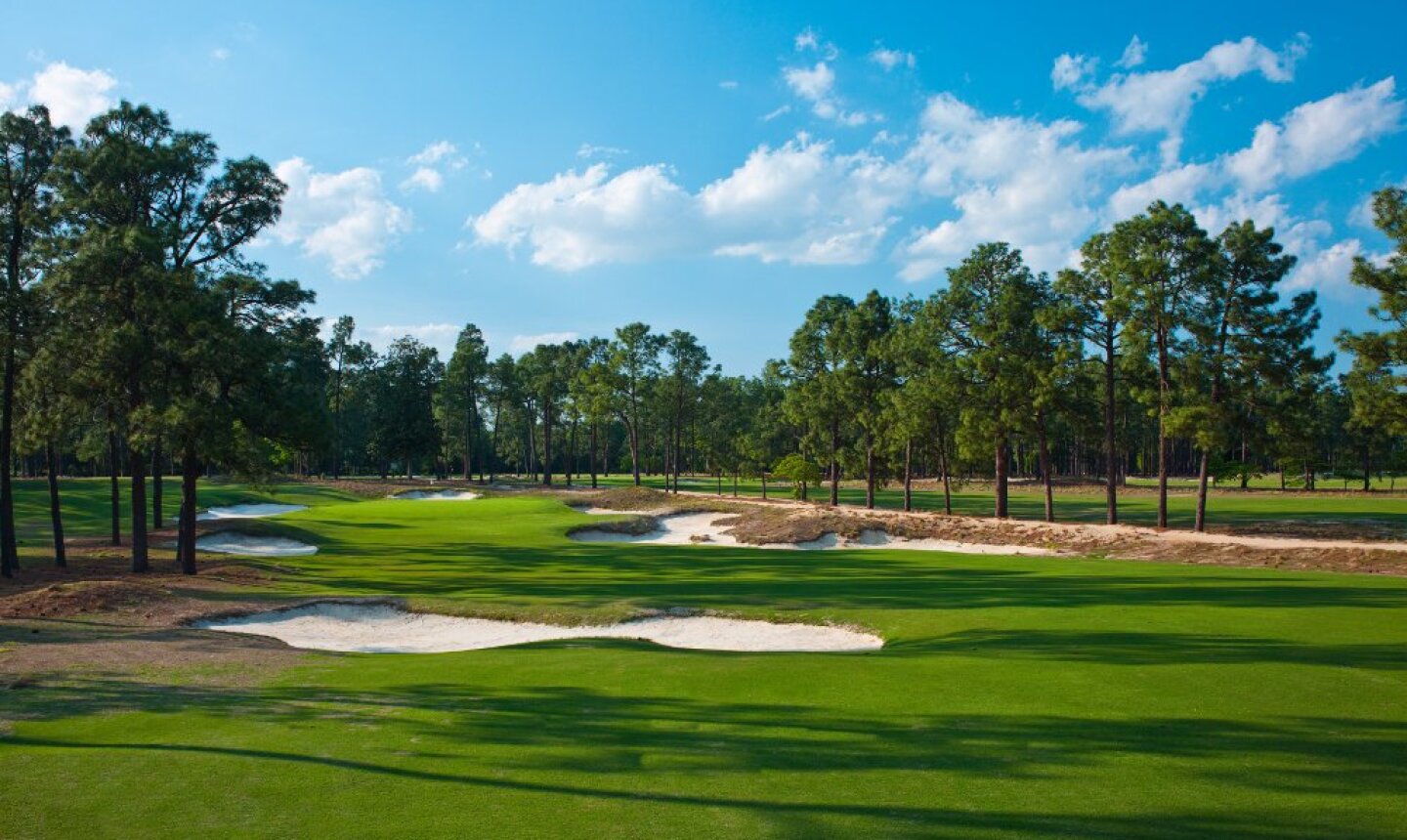 This year’s back-to-back U.S. Opens were two of my favorites ever.

Yes, Martin Kaymer sucked most of the drama out of things with his brilliant play--and Michelle Wie added a bit back--but for golf course architecture nerds like me, Pinehurst No. 2 was the star.

Because I’m down with brown.

If you watched coverage of the men's and/or women's U.S. Opens, you probably noticed that Pinehurst No. 2 was a lot less green than in past years.

Contrary to what we've grown accustomed to here in the USA, I think that’s a great thing.

When Bill Coore and Ben Crenshaw worked on Pinehurst No. 2 in 2010 and 2011, they were not adding their own marks to the course so much as peeling away the last few decades of architectural neglect that had compromised some of the brilliance of a course that Donald Ross spent the last third of his life refining.

No. 2 had always had its trademark green complexes, where the putting surfaces often drop off on all sides to fairway chipping areas, but thick Bermuda rough and overwatering had slimmed the fairways down to a fraction of their intended size.

Not only did Coore and Crenshaw remove more than 30 acres of rough—replacing it with the sandy scrub you saw—they cut the number of sprinkler heads in the fairways by more than half, despite dramatically increasing fairway acreage.

That’s why you noticed the fairways were brown up the sides and only a pale green up the middle. That’s by design—the USGA’s, Coore and Crenshaw’s, and Donald Ross’.

In other words, Pinehurst No. 2 now plays a lot more like the great links courses of Great Britain and Ireland, where golf was born.

So why did so many golfers think Pinehurst looked “ugly” and “awful”?

And yet, many public course players and private club types demand that their courses emulate Augusta because they think that’s “how a golf course is supposed to look.”

So superintendents have been commanded to overwater courses, producing excessively soft conditions that kill the opportunity for bump-and-run in favor of the much less interesting “flop-and-splat.”

In a world where water is going to be more and more important to conserve, golf courses that learn to live on less will thrive.

Not only does this have both a positive financial and environmental impact, it allows golfers to play the type and variety of shots that makes the game so endlessly intriguing.

Next month, the golf world will watch as another lovely blonde, Royal Liverpool Golf Club, hosts the Open Championship.

Tiger Woods won the 2006 Open there during a summer drought when the entire course was browned out and the fairways were running almost as fast as the greens.

Woods’ display of shotmaking that week was one of the best in history, as he cruised to a two-shot victory employing all sorts of punch and bump-and-run shots at the course known as Hoylake.

Again, this is what I'd like to see more of here in North America.

But what do you think? Do you enjoy courses that are a little brown on the edges, rather than green and lush throughout?

Pinehurst is lovely; Ross designed it as a natural extension of the terrain, and it remains as such to this day.

I live in Pinehurst and belong to the club. I thought the course looked ugly. It looked even worse on TV. They did themselves a disservice to host this event and not have the course in good condition. Playing golf on dirt, hard pan and burned out conditions is not right. It looked like a low class municipal course on a cheep budget.

I played both Pinehurst No.2 and Augusta National last month with my father. They are both totally different but both were enjoyable. Pinehurst No.2 was very challenging all over whilst Augusta was a lot easier until you got onto the greens. There are always going to be different styles of golf courses - I am open to both types and really enjoyed being fortunate enough to play both. You have to appreciate the style of both courses and play them the way they were designed.

I for one love green and trees, rather than brown on brown. Grew up in Western Pa. and that is what it is. Thirty years ago , I played municipal courses in Memphis, without watering systems. I am happy I have belonged to nice clubs over the years nie. No more ground that the grass died on , hard as rocks ,and dust flying everywhere. Thought I was in the Dust Bowl.

I too was down for the open this year and thought the course was fantastic and back to thoriginal ross design.and it was easier as a fan to get around augusta,I loved the pinehurst experience. If rumors are true i'm playing it for the first time next weekend so I'll comment further then

I attended the US Open, walked the course and played other courses in the area. I like the redesign of Pinehurst #2 with its natural areas and the architects' attempt to recreate its original look. However, I do not like the redesign of the irrigation system and its resulting green circles in the middle of the fairway. Why were courses in the 1900's brown and hard? Irrigation was primarily done by rain and supplemented by dragging hoses around the more critical areas, which proved adequate to sustain the golf course in its "brown" condition, but not much more.

Wouldn't Pinehurst #2 rough been more challenging if its natural grasses and other growth been more lush than desert-like? I live in the semi-desert and am not a proponent of over-watering, nor do I abhor brown spots on a fairway. Yet, with all the technological advancement in landscape design, surely there are better solutions than simply not watering half the fairway and all of the "natural areas".

Definitely not my idea of a $450 golf experience.

i have just returned from my twice yearly pilgrimage to usa to play golf,this year played arcadia bluffs and bay harbour in michigan ,the reference to pinehurst 2 and augusta, i have played one of them few years ago after the renovation had taken place,
expensive yes, but not as good as Erin hills or the course i mentioned above and only 190 green fee for arcadia which is a great course, more in line with british courses that we play, unluckily we dont suffer from excess water usage as it is raining here most of the year,i would love to play or even get a ticket for augusta, but that is another matter, there is a time and place for each course subject to budgets,but i believe that at least now 4 out of the next 6 us opens are on public courses, which is how it should be , not all private courses.they hAve their place in life but it would be nice for the brits to play some of these , as we allow all americans to play on all our open courses, otherwise they are taken off the open rota, even if some permit only 3 days a week to the public,to end ,build more natural courses using the local topography and minimise water for fairways ie use only tees and greens

I was there and the course looks nothing like your photo above. It should have looked exactly like it though !!

Worst Open I have even been to, dust every time pro hit the ball from the fairway, nice try USGA to try and convince the world that brown is OK, but for our National championship we should have the best (and toughest) conditions. The course really looked likea cheap muni in florida in August.

Believe that this golf course is way over rated and over glamourized. Augusta is a beauty for the priviledged few.
Need more sensible fees, and less - fake innovation - equipment wise.
Otherwise, who will be playing golf 10 years from now?

Tim Gavrich
Senior Writer
Now Reading
Is Pinehurst's No. 2 the Anti-Augusta National?
Search Near Me