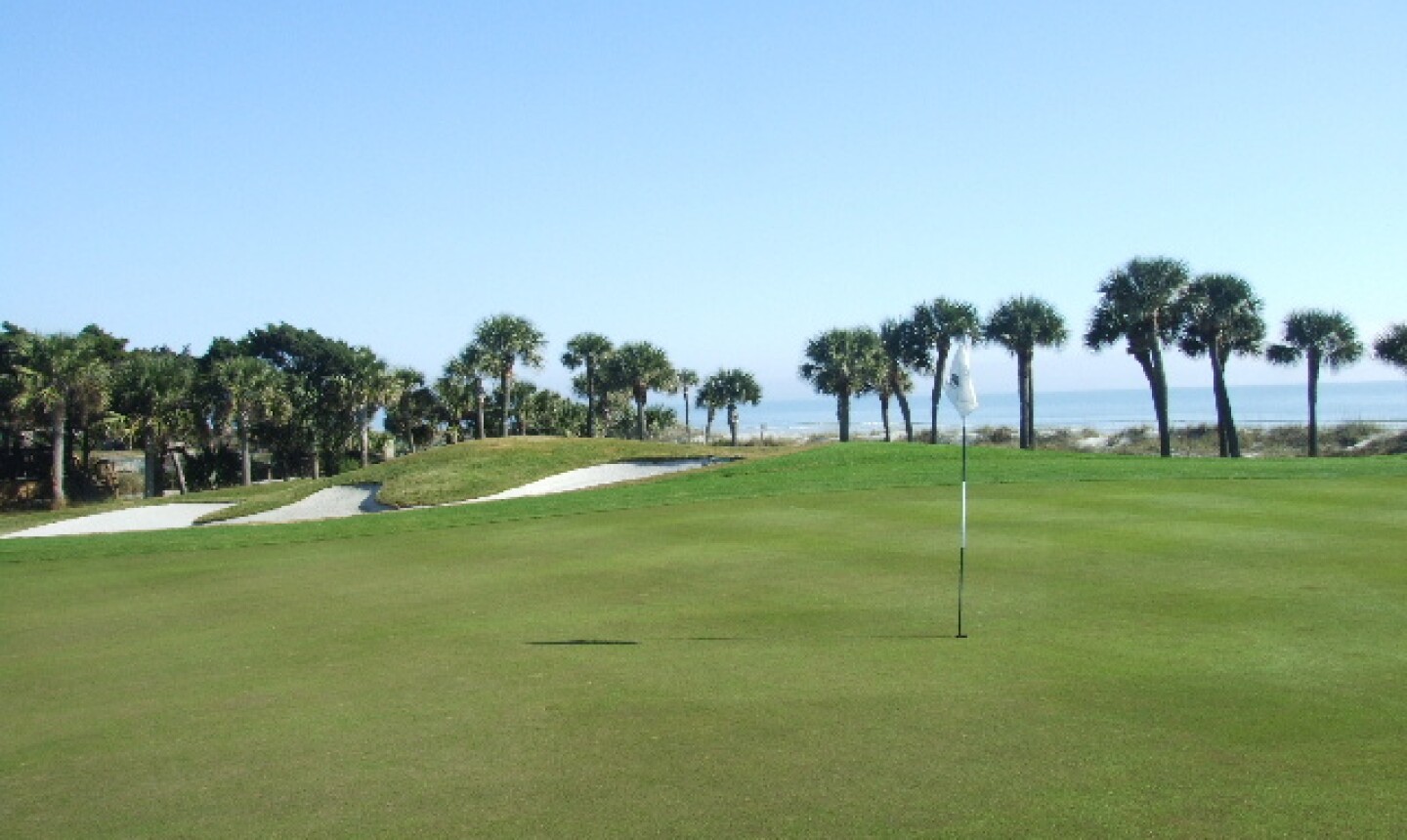 The signature 10th hole at the Jones Course at Palmetto Dunes brings you up to the Atlantic Ocean. Brandon Tucker/Golf Advisor 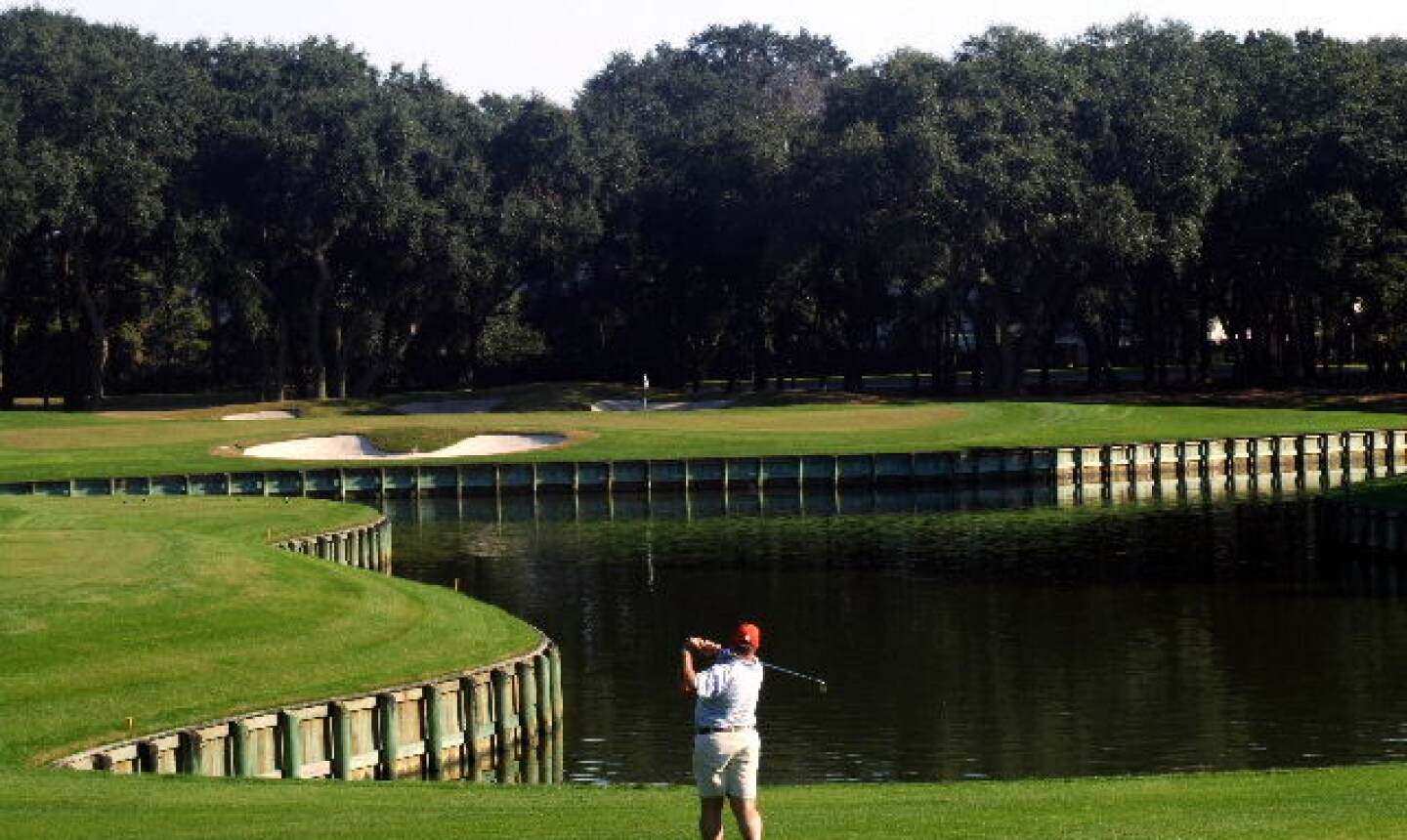 The par-3 eighth hole plays entirely over water and can play as long as 227 yards. Brandon Tucker/Golf Advisor

HILTON HEAD ISLAND, S.C. - One of the few golf courses here with the distinction of up close, oceanfront scenery is the Robert Trent Jones Sr. Course at Palmetto Dunes - one of three championship layouts at the resort.

The original course at the resort, it was built by Jones in 1967, though anyone who hasn't played there since 2002 will be pleasantly surprised when they return. Roger Rulewich, who worked under Jones for many years, managed the renovation that brought the layout back to the forefront of resort golf courses on the island.

Course officials say the Jones course is now the most popular of the three at Palmetto Dunes, a result of its playability and oceanfront scenery.

"The Jones is the fairest of the three courses," said Gavin Greenville-Wood, head professional at the Jones facility. "It's all laid out in front of you. On the Hills course, there is a little more luck involved."

Those who have also experienced RTJ's acclaimed Dunes Golf & Beach Club in Myrtle Beach will notice a lot of similarities with its blend of oceanfront property and tree-lined inland holes.

The signature hole is of course going to be the one that offers the promised ocean views, a hole you've probably seen if you've ever thumbed through any Hilton Head literature: the par-5 10th. It's the second of back-to-back par 5s, and plays 550 yards straight into the prevailing winds off the coast.

The approach shot, playing toward a raised green overlooking the ocean, requires deft precision, and don't be shy, as it's tough to go long here.

"It's the most picturesque course I've played (on Hilton Head Island)," said Rob Beanland, visiting from Vermont. "It's set up well and has really nice greens."

Of course, there are 17 other holes where the ocean scenery isn't the star, but that doesn't keep it from offering tremendous shot value. A series of lagoons weave around 11 holes, and water is a prominent threat - nowhere more so than on the par-3 eighth hole, which plays as long as 227 yards.

The Jones Course at Palmetto Dunes: The Verdict

The Jones Course is a much different test than the other two courses at Palmetto Dunes, and despite the original 1967 opening, is the most modern looking of the three, thanks to its 2002 renovation. It's longer (7,005 yards) and more wide open from the tee than the Hills Course and par-70 Fazio Course, and is also the only one of the three that plays right up to the doorstep of the ocean. It's a combination that makes the Jones Course the most requested round at the Palmetto Dunes resort.

Some say the Hills Course is superior because the Jones plays alongside a major roadway on several holes on the front nine and is more in contact with the surrounding neighborhood. That's true, but despite the hum of traffic on a few occasions, the Jones is a mostly peaceful experience. This is Hilton Head after all, not Manhattan.

Hilton Head visitors will also want to be sure not to buy their golf souvenirs before checking out the pro shop here, ranked among the top three PGA Merchandisers of the year for its excellence in offering a diverse range of clothes and golf equipment, from affordable shirts and toys to designer gear like J. Lindberg and Lacoste.

Regarded as a top resort for families, the Jones Course has a special set of junior tees available for play at about 2,800 yards. 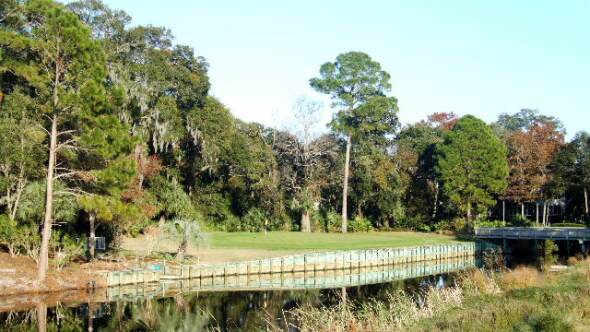 Articles
The Hills golf course at Palmetto Dunes: Brains over brawn on the course that stumped Tiger
Golfers at Palmetto Dunes love to talk about Tiger Woods' infamous mishap on the Arthur Hills golf course, one of three layouts at the resort Woods played at a collegiate tournament during his days at Stanford. Woods scored a quadruple bogey eight on the diabolical par-4 17th hole - one of the toughest golf holes on Hilton Head Island - in one of the few lowlights in his illustrious two-year college career.
2 Min Read