The top golf courses anybody can play in Mexico

From Cancun to Cabo, Mexico offers some incredible golf. 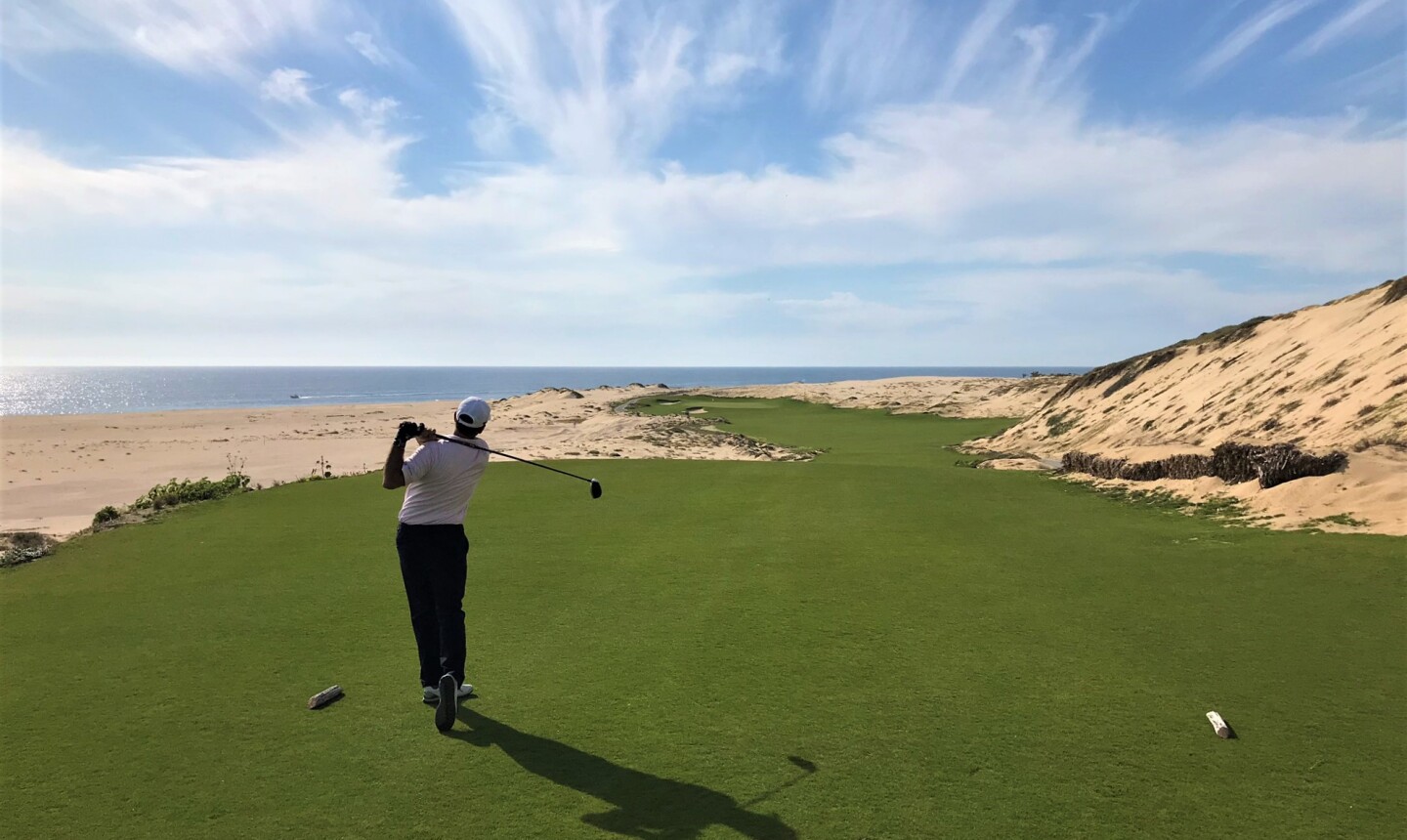 The 14th hole might be the most special hole at the newly renamed Solmar Golf Links, which opened as Rancho San Lucas in 2019. Jason Scott Deegan/GolfPass 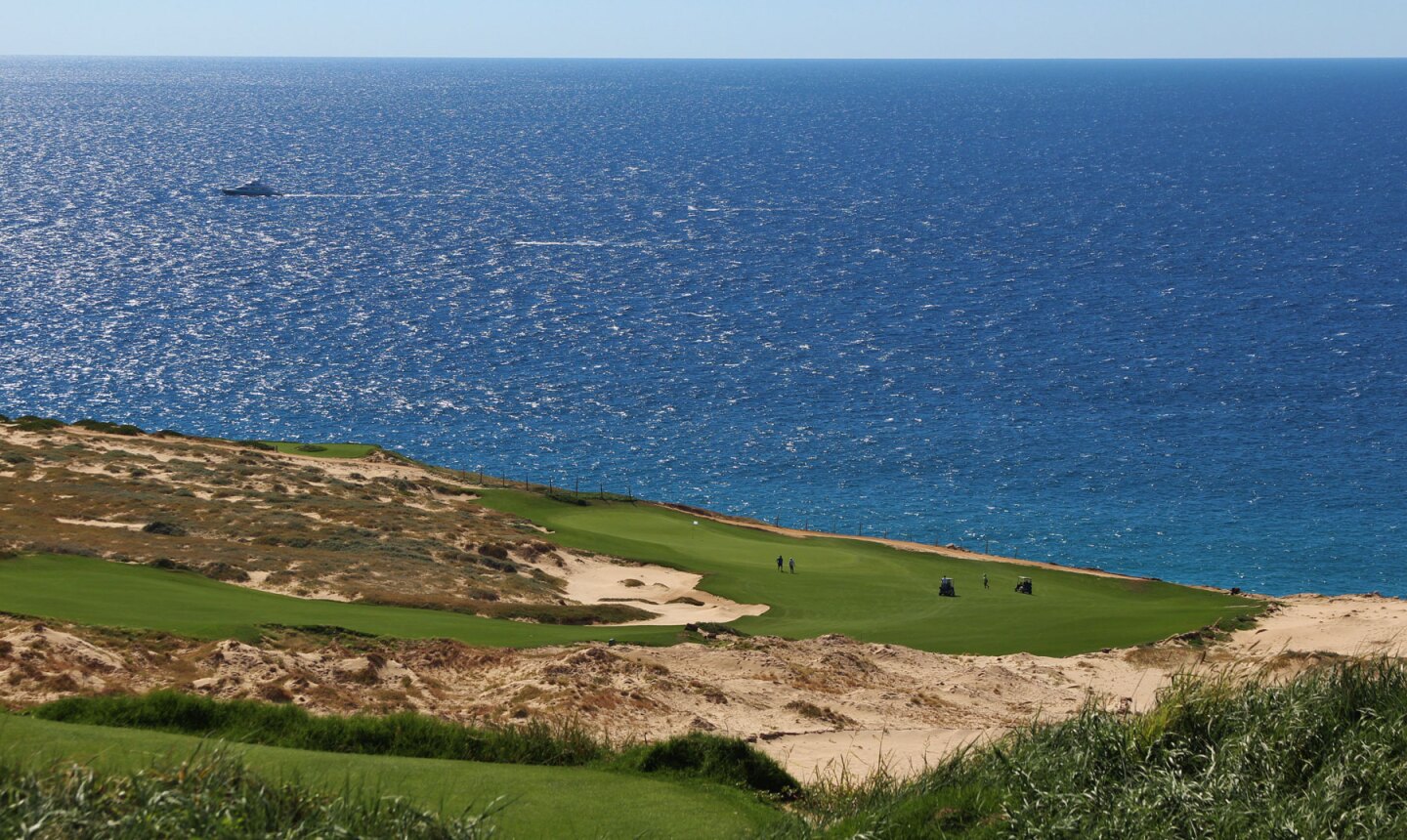 Quivira Golf Club's par-5 12th hole zigzags through the sand dunes to a green on the ocean. Jason Scott Deegan/GolfPass 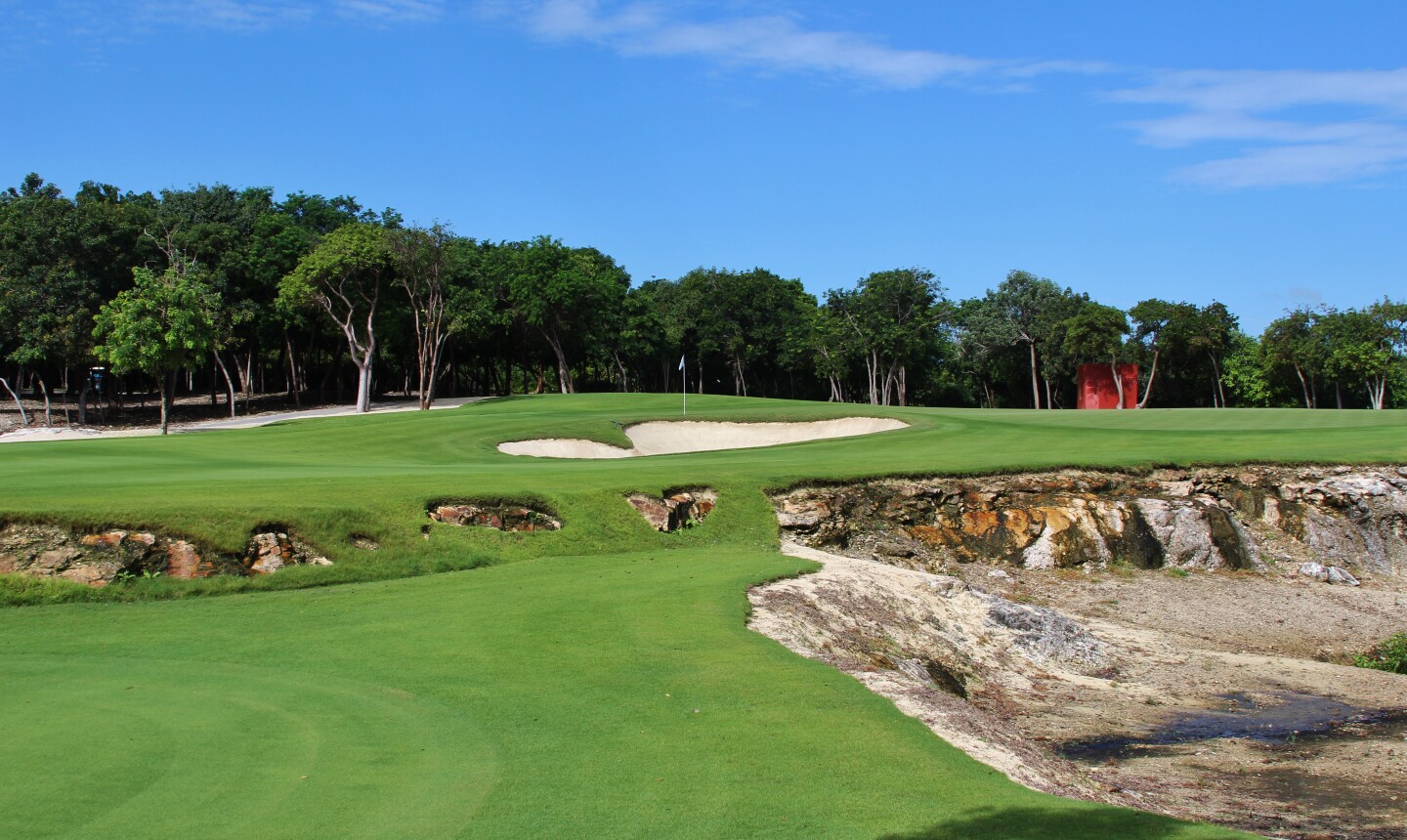 A desert wash sits next to the ninth green of the El Camaleon Golf Club in Mexico. Jason Scott Deegan/GolfPass 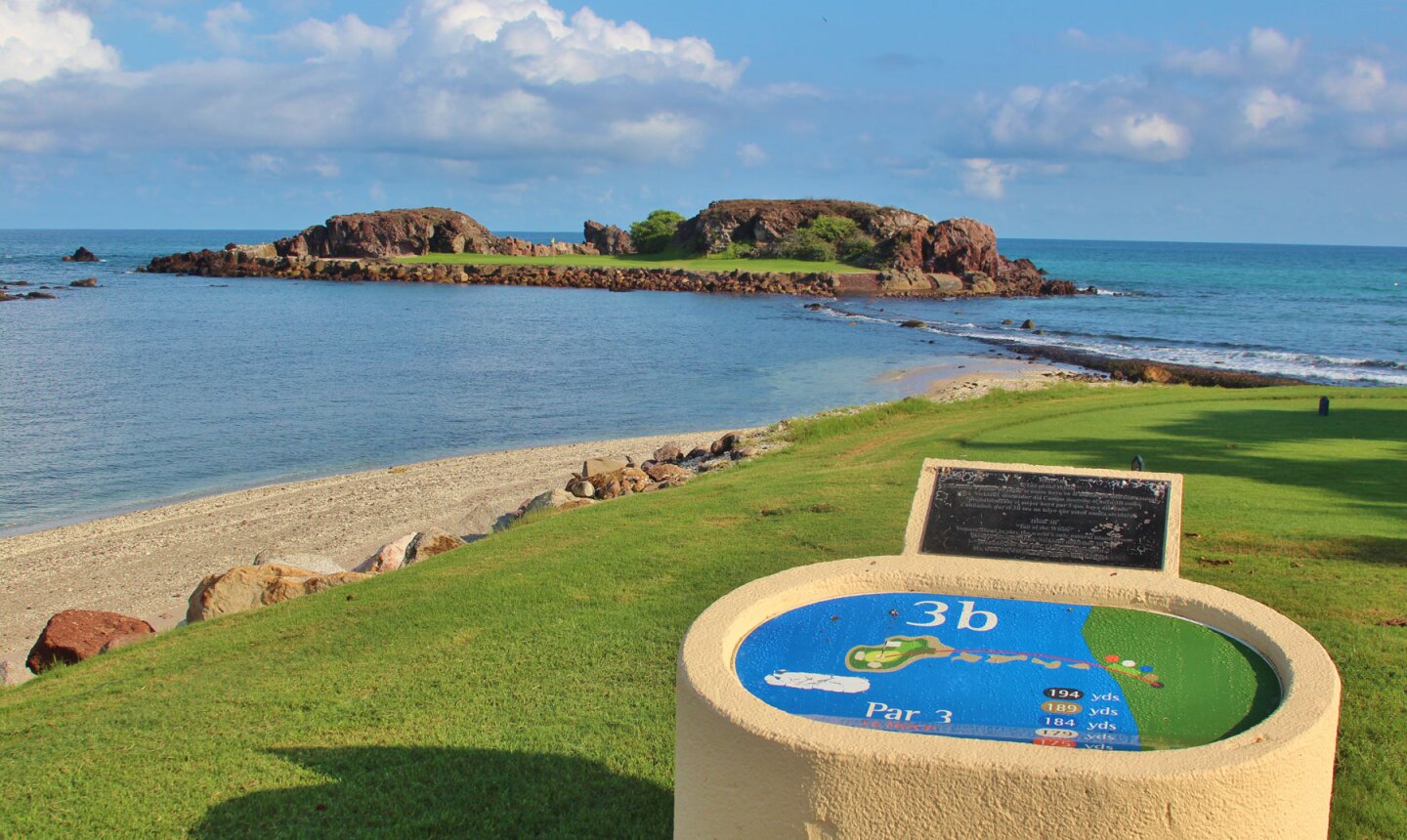 Playing the "Tail of the Whale" hole -- a natural island green in the ocean called hole 3b -- makes the round on Pacifico at the Punta Mita Golf Club so special. Jason Scott Deegan/GolfPass 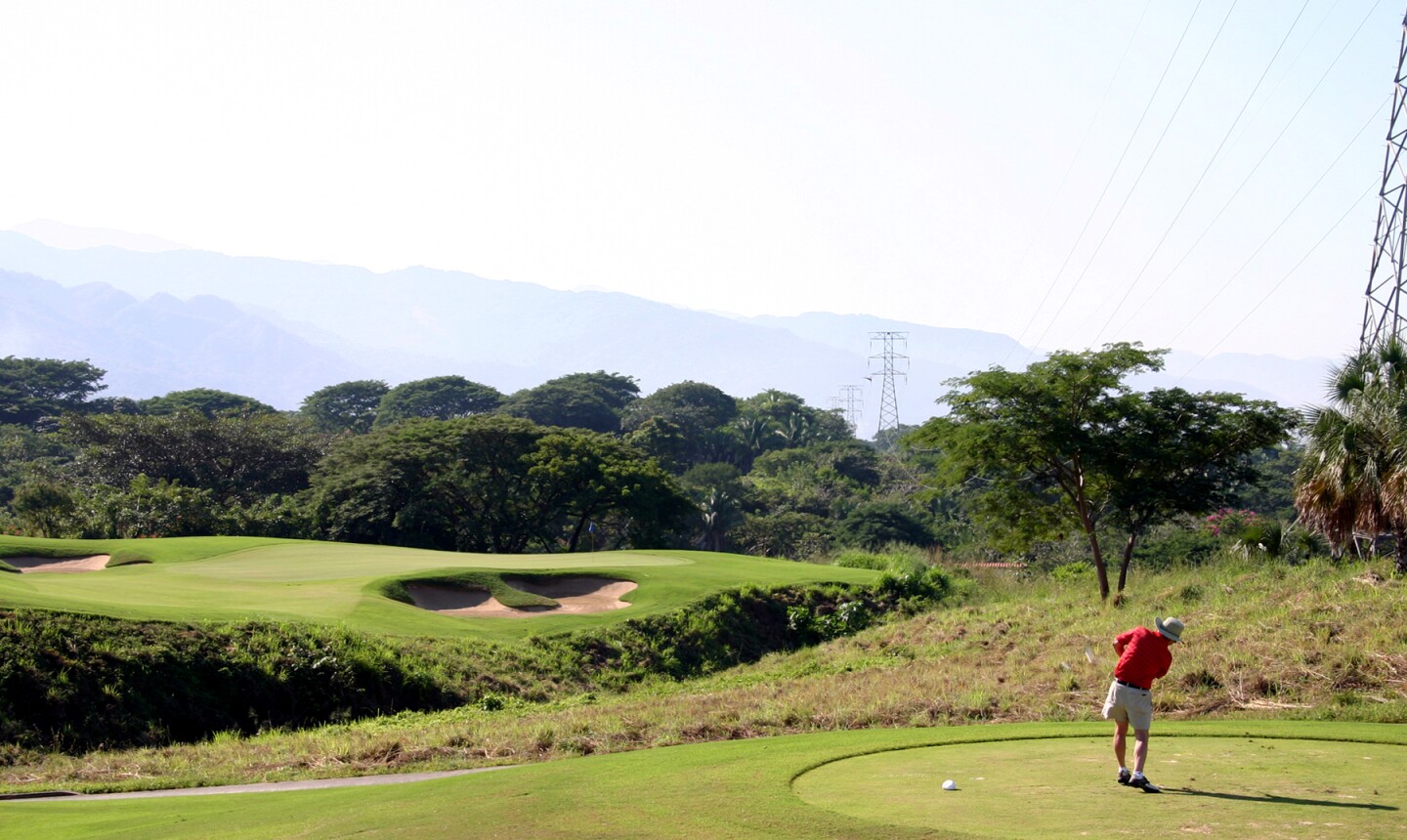 Hitting the green off the tee doesn't guarantee par on the ninth hole of the Nicklaus Course at Vista Vallarta G.C. Wes Gilbertson/GolfPass

When it comes to premier public golf in Mexico, it's mostly the Shark and Golden Bear show.

I've made more than a dozen golf trips to Mexico the past decade, playing 31 courses from coast to coast. It's no coincidence that Jack Nicklaus and Greg Norman have designed most of the best courses I've discovered south of the border. Their name recognition carries clout with international developers looking to attract American golfers.

Nicklaus has been handed many of the country's best coastal sites since making a splash at the 27-hole Palmilla Golf Club, which celebrated its 25th anniversary in 2017. Norman counters with the El Camaleon Golf Club, the host of Mexico's only regular PGA Tour event, the Mayakoba Classic in Riviera Maya, and the new Rancho San Lucas, a 834-acre master-planned community that debuted in 2019, featuring 1.2 miles of beachfront in Cabo. Interestingly, the 27-hole Puerto Los Cabos in Cabo features nine holes by Norman and 18 by Nicklaus.

It should be noted that Tom Fazio's exquisite Querencia and Chileno Bay Club and El Dorado Golf & Beach Club and The Cove Club, both by Nicklaus, and Twin Dolphin -- all in Los Cabos -- are private, although the Chileno Bay Resort & Residences by Auberge that debuted in 2017 allows some access to Chileno Bay and The Montage Los Cabos some pricey access to Twin Dolphin. For more on Cabo's best resorts for golf check out this story.

With all that sorted out, here is a most valuable Deegan's Dozen: The top 12 public/resort courses I've played in Mexico:

The new kid on the block has shot straight to the top. Norman's Rancho San Lucas offers some of the best sand dunes anywhere in the world. The stretch from 14-16 is memorable. There's also an island green at no. 17 to mix things up.

No course showcases Cabo's desert-mountain-ocean landscape better than this beauty near downtown Cabo San Lucas that opened in December of 2014. Quivira's gorgeous par 3s and a quirky drivable par 4 cling to mountain cliffs above the ocean. Towering sand dunes frame other holes. The desolate desert sparkles on the final three par 4s at holes 16-18. Only golfers who stay at a Pueblo Bonito resort or own property inside the development have access to Quivira.

I finally got around to playing the full 18 at the Dunes, the only course in Mexico to achieve world top 100 status by Golf Magazine. I played the front nine in 2015 and the back nine in 2018, giving me a disjointed perspective of the Davis Love III design. The opening loop introduces some fun dune holes, although it lacks the ocean views of a more dramatic back nine. Two new holes, the par 5 at no. 12 and par 4 at no. 13, debuted in 2014. Anybody can play at the private Diamante if they stay on property or at the new 600-room Hard Rock Hotel Los Cabos and the 200-room Nobu Hotel Los Cabos, both of which opened in 2019.

Rees Jones breaks into the Mexican market with a stunner in tiny Loreto, 300 miles north of Cabo and 700 miles south of the border. The front nine is framed by the towering Sierra de la Giganta mountains before a two-hole run through subtle sand dunes near the beach at no. 12 and no. 13. It takes a two-hole climb to reach the other side of the mountains for the climax, the par-3 17th hole 250 feet above the crashing waves of the Sea of Cortes. Once you get over the visual fireworks, it's a harrowing shot to a tiny target green set on the cliffs. The adjacent Villa del Palmar at the Islands of Loreto is a great spot to unwind after golf.

With eight holes on the ocean, this gorgeous Nicklaus course put Punta Mita north of Puerto Vallarta on the map in 1999. The famous "Tail of the Whale" hole -- the extra par 3 called 3b -- plays to a natural island green in the ocean. A raised cart path allows access to the green at low tide. Unfortunately, the water and waves were up the day I played it, and the resort's amphibious cart wasn't working. I splashed two in the drink and still went about my round in a good mood. It's a fun experience.

Forget the Tail of the Whale. The par-4 17th hole at Bahia might be the best on property. This Cape Hole -- one of six ocean holes on Bahia -- requires several heroic shots to avoid ending up on the beach. Nicklaus spiced up Bahia, which opened in 2009, by making it more difficult than Pacifico. Severe greens make putting a challenge. After complaining about the course's difficulty, many members have come to enjoy Bahia's shot-making elements more than Pacifico.

Jack's first foray into Mexico and Latin America debuted Palmilla's Arroyo and Mountain nines in 1992 in Los Cabos, followed by the Ocean nine in 1997. I prefer the Mountain and Ocean loop best. Palmilla's Ocean nine drops 600 feet in elevation during the first six holes with the third green perched on the beach. A treacherous canyon surrounds the par-4 fifth of the Mountain nine. Management by Arizona-based Troon Golf assures top service and conditioning. 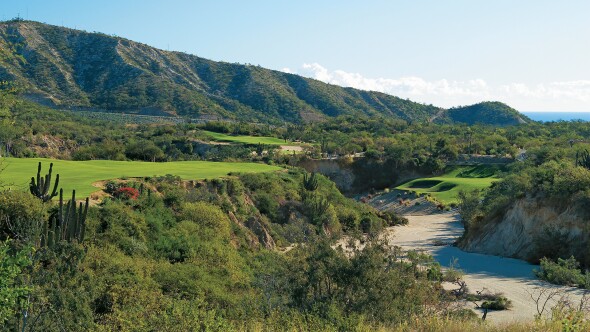 The One & Only Golf Package
FROM $357 (USD)
LOS CABOS, MX | Enjoy 3 nights' accommodations at One & Only Palmilla and 1 round of golf at Palmilla Golf Club.

Norman's tournament-tested track, tucked inside a lavish resort development 40 minutes south of the Cancun International Airport, traverses three ecosystems, the jungle, mangroves and beach. Signature par 3s at nos. 7 and 15 don't really show off the Caribbean Sea until golfers putt on the greens. A clubhouse renovation in 2014 added a chic second-floor bar and restaurant. 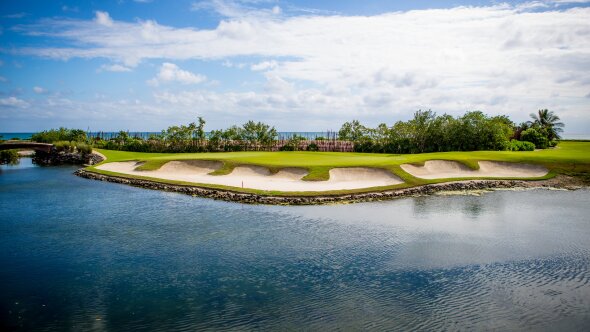 Tiger Woods' first design is a solid rookie debut as a designer. There's no "oh wow" hole, just a bunch of strong dune holes to start, desert arroyos to tackle in the middle of the round and some nice panoramic views of the ocean coming home. What sets El Cardonal apart from the competition is the rock-star treatment players receive throughout the day. Golfers enjoy free food and drink at the driving range and course comfort stations.

The Punta Mita courses 10 minutes away tend to overshadow this excellent Norman course. Litibu is vastly under marketed and a relative unknown. The opening of the new, adjacent Iberostar Playa Mita might help it gain some traction. Litibu (named after a local bird) hosted a Canadian Tour event in 2010, a year after opening. Several unique inland holes rival the three holes with ocean views (3, 4 and 18). Three hungry bunkers guard the middle of the fairway on the uphill, par-4 16th hole. When the pin is cut back left on the par-3 17th, the tee shot is completely blind over dense jungle. Kudos to Norman for being creative.

This club 25 minutes from Puerto Vallarta delivers true jungle golf at the base of the Sierra Madre mountains. The Nicklaus Course is slightly longer than Vista Vallarta's Weiskopf Signature Course, although both have identical slopes from certain tees. It hosted the 2002 World Golf Championships, EMC World Cup and the 2006 Blue Agave Golf Classic of The Champions Tour.

This Norman course edges out a host of other worthy competitors because it's run so well by Vidanta, Mexico's largest course owner/operator, and kept in such great condition. It's also a fun round that's very playable. And it gets bonus points for having a lighted par-3 courses on property. After attending the 2016 grand opening, I haven't played the five new holes that were scheduled to be completed in 2017, so there's always a chance this course could move up or down depending upon the new routing. The recent announcement that it will host its first PGA Tour event, the 2022 Mexico Open, validates its place among Mexico's top courses. 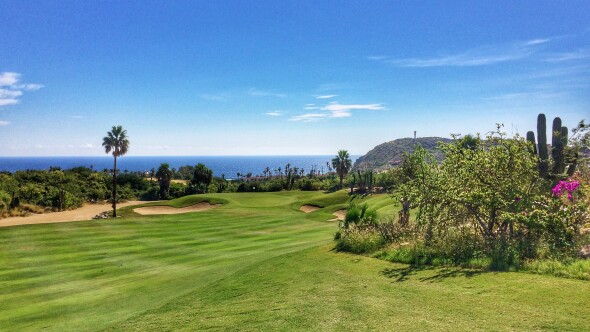 Mexico Trip Planner
Mexico has a plethora of great golf destinations, from Cabo San Lucas on the west coast to Cancun and the Riviera Maya on the Gulf of Mexico.

Jason Scott Deegan
Jason Scott Deegan has reviewed and photographed more than 1,000 courses and written about golf destinations in 20 countries for some of the industry's biggest publications. His work has been honored by the Golf Writer's Association of America and the Michigan Press Association. Follow him on Instagram at @jasondeegangolfpass and Twitter at @WorldGolfer.
8 Comments

Was just in Cabo and loved Rancho San Lucas, Quivara not so much.
Twin Dolphin and Querencia are quite good but private.
Danzante Bay and the resort are really special and worth the effort to get there.

I agree about Quivira, The cliffside holes are beautiful, but driving through the desert on dirt cart paths, passing unused heavy equipment, for many holes didn't leave me with warm fuzzies for my $200 twilight greens fee. Really like Palmilla and Cabo Del Sol also.

Jason
I’m traveling to the Cancun area for the first time next month.
Where do you recommend playing and what is the best overall
golf value down there? From Southern California and am amazed
at how pricy golf is throughout Mexico

Mexico has a monopoly on golf at this time and must cash in while the snowbird tourists like you are in town. My suggestion is to support the industry and play several times! Several good courses are on GolfNow so check that app first. Others that are more affordable are the Iberostar Cancun (beware the crocodiles in the ponds, though, as a golfer lost several fingers 6-7 years ago) and the Par-3 Nicklaus Experience at Vidanta (a high-end executive course). The most well-known is Mayakoba, but to me, Iberostar Playa Paraiso is the most fun.

apparently you have not played golf for long because if you were a player who knew golf youwould have ti Juana, Mexicali and baja mar on your list

Baja Mar has a one-star review on our site from our California Advisor. While the Alister-MacKenzie designed Tijuana CC is a draw, the other two are mostly for San Diego and SoCal residents looking for affordable golf across the border, not really for bucket-list chasers wanting to play the other courses I've featured in the story. And yes, I've played a little golf - more than 800 courses in 20 countries. https://www.golfadvisor.com/courses/22306-real-del-mar-golf-resort/

Awesome review!!!!  Thanks for the suggestion..... You made our decision easy.... Pacifico it is!!!!  Appreciate your golf knowledge

El Camaleon at Mayakoba, one of the best golf courses in all Mexico! A PGA Golf Course with Excelent views of the Mexican Caribbean, 100% recommended.