A state senate bill that aims to change the way golf courses are taxed has many in the New York golf industry up in arms.

On the surface, the bill, introduced by Sen. David Carlucci, D-Rockland (Westchester County), is a scary prospect for all golf courses and clubs, which could see their taxes increase dramatically if upon passing, local municipalities decide to assess them at higher rates based on their highest and best possible use.

But really this bill is targeting some very high profile clubs closer to New York City -- more specifically, President Donald Trump's Trump National Golf Club, located in the very upscale neighborhood of Briarcliff Manor in the town of Ossining. (Nearby Sleepy Hollow G&CC in Rome has also sought deep reductions in its assessments over the past few years.) Trump himself estimated in a federal filing when he was running for president that the club was worth $50 million, but his lawyers have successfully petitioned the courts over the past four years to have the club assessed at far lesser amounts, as low as $6.5 million. They are seeking to reduce the valuation even further ($1.5 million, according to Carlucci) as well as get money refunded from overpayment in previous years.

"In 2008, the President took similar legal action against the Town of Ossining and won, having his assessment of the course reduced from $38 million to $16 million and leaving taxpayers to foot the difference," Carlucci said, calling the current law the "country club loophole."

"The bottom line is that we have golf courses taking advantage of an interpretation of the law that was never intended for this purpose," he added.

Current use vs. highest use

Under current New York state law, properties can only be taxed according to their current use, and in this case, Trump National is being assessed like a public course in terms of value.

If the golf course tax bill were to pass, Trump National's valuation would rise dramatically, perhaps more toward the $50 million range, according to Fernando Gonzalez, assessor for the town of Ossining. This is because the usable land (which would not include wetlands and steep hills), could be assessed similar to 100 one-acre home lots, he said. It's a complicated procedure, but would be well worth it for the town of Ossining's tax rolls.

Earlier this week, Carlucci and Assemblywoman Sandy Galef, D-Ossining, led a rally outside of Trump National to promote the bill. What has opponents up in arms, though, is that they are fearful that the bill, if passed, could pave the way for local municipalities to abuse this newfound privilege. Most golf courses – public or private – don’t have the financial resources of the elite clubs near New York City.

Griffo points out that many course owners are small business owners and need support, not more obstacles. Maintaining a golf course is expensive, and the golf business is tough, especially in his area where seasons are short. And they're not only running courses, but many of the owners also have restaurants and banquet facilities, and have to watch their bottom lines closely. And if their taxes were to increase four- to ten-fold, as he understands it, it could force these courses to raise green fees to unaffordable rates or worse yet, these courses could go out of business.

"My concern is from an economic perspective and a recreational perspective," said Griffo, adding that affordable golf is not only good for tourism, but good for local residents, too. He says measures like these are contrary to bringing people to visit the state of New York and don't do anything to discourage the exodus of New York residents to other states like Florida and Texas. And though he acknowledges that there's a local option to the bill, there are no assurances that local governments wouldn't pass measures to take advantage of the bill to raise taxes on golf courses, especially if they need the money.

"In my opinion, we should be lowering the tax burden on small businesses, creating more economic opportunity," Griffo said.

Why not just private clubs?

Golf course owners are understandably concerned about the bill as well. In a story published by the Spectrum News in Rochester, Gene Carcone, owner of Stonebridge Golf & Country Club, a semi-private club in Smithtown, N.Y., said: "We are taxed, we are depressed, and I think that we are already taxed too high."

But Carlucci says he doesn't believe the bill, if passed, would affect any course that's already paying its fair share.

"New Jersey does this and the golf courses haven't gone out of business," said Carlucci, who acknowledges that golf is important to the state and has an economic impact in the Hudson Valley, which he represents.

"There are safeguards in the legislation because it requires a local municipality to pass a local law," he added. "And that's something that takes a majority vote of the town board or a public hearing. Again, I don't think anyone wants to put golf courses out of business. This is just a safety measure that allows these municipalities to implement these measures when there's been egregious examples... We're just asking them to pay their fair share of the taxes that contribute to our community and just be an equal number in that."

Groups like the New York State Club Association as well "We Are Golf," and the United States Golf Association, for example, are lobbying against the bill.

And while the bill is expected to mostly follow party lines -- with the Democrats currently holding majorities in both the Assembly and Senate -- it's uncertain if it will pass in its current state. A similar bill introduced last year failed. Several Democratic representatives and senators have expressed concern and are not ready to support it, and Republicans are universally opposed to the bill.

Perhaps the bill could gain a little more support if it were to only include private clubs, exempting daily fee and public courses.

"I appreciate that, and I actually like that idea. So I would be open to that and see if I could do it," Carlucci said. "Because my intent is to go after these private courses… I'll have to do some research to see if we can do that and it would help our cause."

Talking taxes can be tricky without getting too political. Let us know where you fall in this debate in the comments below.

Put the tax on the Private courses that offer no benefit to the communities because of their exclusivity. Public courses (the kind owned by individuals or families) are the very definition of "small businesses" as they are difficult to operate and maintain, but offer access to the public as "daily fee" courses. Public courses (owned by a community or municipality) also offer use to the community as "daily fee" courses. Private country clubs don't offer anything to the community, so this tax should be levied ONLY at these facilities.

Be careful what you wish for?
Tax increases effect a lot of people and companies.
I live in S.C., golf capital of America.
2010
Golf courses employed 35,000 people
$835 million of income
$276 million dollars paid in federal & state taxes
The golf tourism for S.C. keeps my property taxes low!

P.S.
Homeowners who buy on golf courses that close will lose 25% -50% of their property value.

I would favor such a Bill if it was limited to private courses. This article clearly shows how Trump has bullied people (and even Governments!) just to get his way! He is always eager to sue in order to delay or stop whatever actions he does not like. His properties need to be taxed fairly and not at a low tax rate just because he has the money to hire attornies for the purpose of avoiding his rightful tax obligations!

So Ralph, you're saying discrimination is fine as long as it's against someone I don't like. Spoken like a true liberal!!

Well at least you're honest about it. As an outsider it seems that this bill is clearly aimed at Trump.

What people are forgetting is that some golf courses are the only green space left in many communities. Whenever I fly over a metro area it is always remarkable how much of the land is consumed by buildings and pavement. It is nice to see some green space still available for wildlife and in certain cases the general public to enjoy.

Just try to convert a golf course into some other type of development and you will learn a ton about how people really feel about these neighbors.

Why not tax this politician 's residence as if it contained a 50 story hotel ? Zoning regs & practically not withstanding. 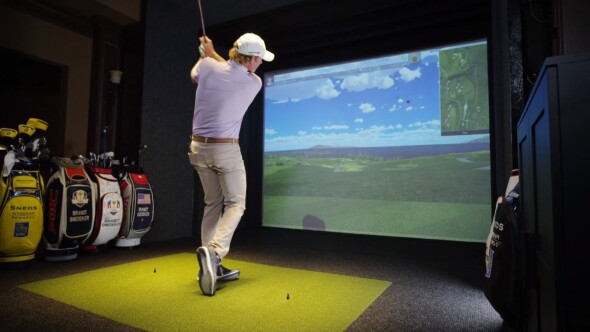 Articles
5 Min Read
Golf at home?
Installing a Full Swing golf simulator might be more doable than you think.