Players react to a record-setting 2017 U.S. Open: Should Erin Hills host another major? 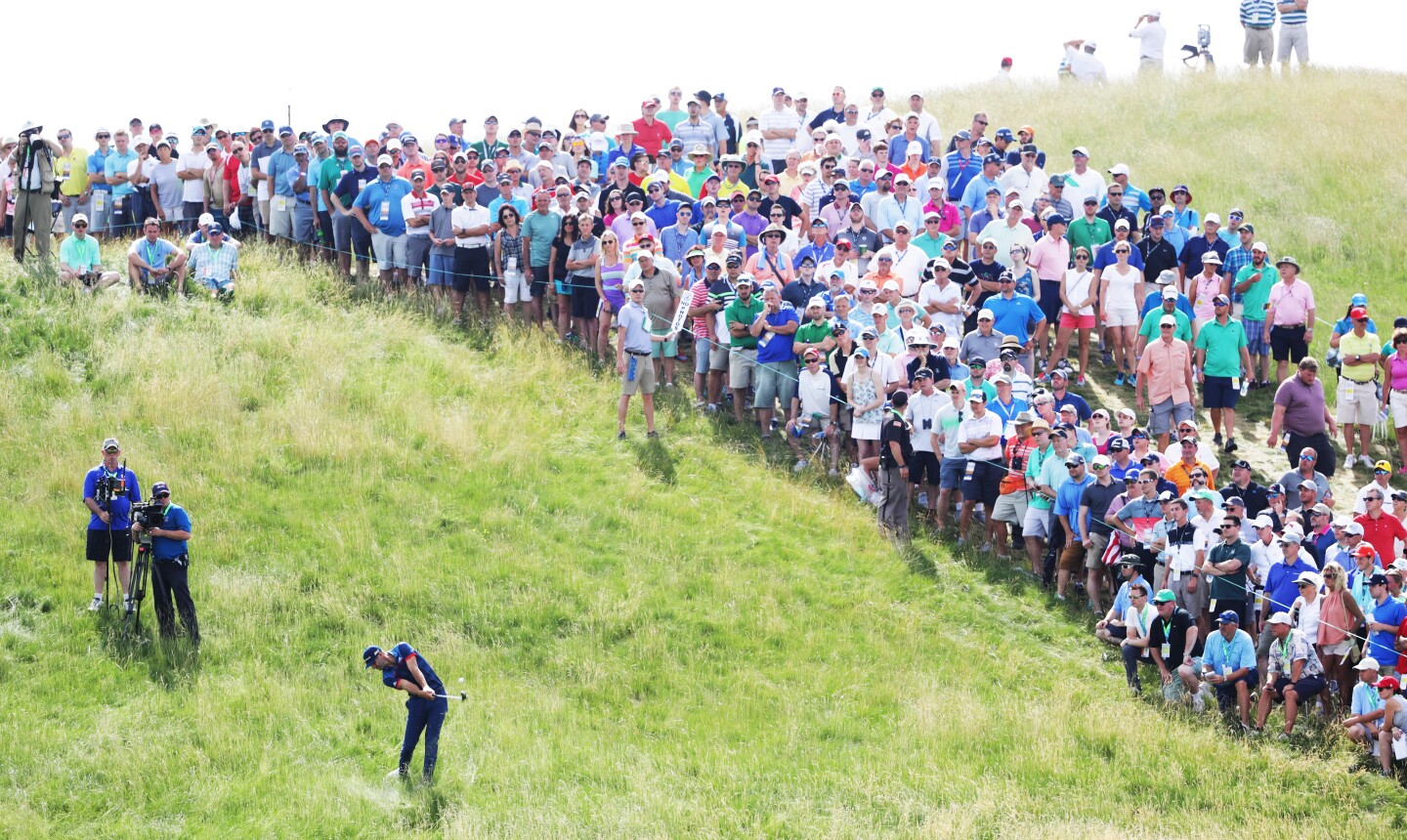 Dustin Johnson found the fescue early and often in round one of the U.S. Open at Erin Hills Streeter Lecka/Getty Images

We monitored player reaction about the golf course and the USGA's setup during U.S. Open week at Erin Hills. Here's the final version of the story.

Turns out, the Erin Hills Golf Course does favor bombers after all.

Brooks Koepka overpowered golf's newest major championship venue and the field to win the 2017 U.S. Open by four shots after battling the wind to a masterful final-round 67. His 16-under-par total matched Rory McIlroy’s record score in relation to par at the 2011 U.S. Open at Congressional.

Now with the tournament finished, it's time to ask another pertinent question: Should Erin Hills host another major?

"I think it should," said Brian Harman, who finished in a tie for second at 12-under-par with Hideki Matsuyama. "I think it's a great test. If the wind was up like this all week, your winning score is much higher than it would have been. And the scores were low because the greens were good. The greens were a pleasure to putt on, and it was easy to make putts. That's why the scores are low. You can't make the course long enough where guys aren't going to shoot under par. If you want guys to shoot over par, you bring in the fairways, you make the rough deeper, and you make it more penal around the green. But this place is a fair test."

"I mean, this golf course, you had to put the ball in the fairway and if you didn't you really got penalized, just plain and simple," he said. "I was in the fescue a couple of times, I think maybe three times, and it all jumped out straight left on me, I didn't even have a good lie. I can't imagine if I hit it in there a couple more times how bad it would be. With it being wet, it made the fairways a little wider and the greens more receptive. This golf course is in fabulous shape. I love it, obviously. Yeah, I thought it was a great test."

Did the USGA err on the side of being too cautious in the setup all week? Maybe. Heading into the final round, the 7,818-yard course was simply too soft, too wide and amazingly not long enough to defend par against the best players in the world. Despite that fact, Mike Davis, the USGA's executive director, praised Erin Hills during the final round telecast on FOX.

"Very pleased. If we had to do it over, we might do a few things different, but it's a good start for a course that is only a dozen years old," he said.

* Justin Thomas shot a U.S. Open record score in relation to par - a nine-under 63 - in the third round to tie the record for the lowest score in the U.S. Open history, prompting Golf Channel analyst Johnny Miller to subtly criticize the setup. Miller famously fired 63 in the final round at Oakmont Country Club to win the 1974 U.S. Open by a shot.

“Taking nothing away from 9 under par – 9 under is incredible with U.S. Open pressure,” Miller told GolfChannel.com by phone. “But it isn’t a U.S. Open course that I’m familiar with the way it was set up.”

In typical Miller style, he added two hard-hitting quotes that are sure to define this championship: "Erin Hills isn’t exactly Oakmont” and “A 63 for a par 72 is a heck of a score, even if it was the Milwaukee Open.”

Even leaders like Rickie Fowler would have liked to see a more traditional U.S. Open setup. Erin Hills wasn't easy - only four of the top 12 ranked players in the world made the cut - but in historical context for the event, it did prove to be out of character.

Earlier in the week as players started to figure out the course, they gave all sorts of interesting takes about Erin Hills.

Koepka said he liked the variety of Erin Hills. "That's the beauty of this course, how many different ways you can play it," he said during an interview on FOX after the round.

Fowler played somewhat conservatively all week. "Take what the course gives you," he said during a TV interview. "Just pick your way around."

Steve Stricker added after the second round: "The course is, I would say, a few shots harder than it was yesterday. The pins were a little bit trickier, I think. The speed of the greens seemed to pick up a foot maybe of speed. A couple greens that are more exposed were faster, so it was hard to get a feel for the correct speed. It's just, you know, it's got your attention on every hole, because you know if you miss the fairway, you're going to pay the price."

Never had so many players without a major title had such a great shot to break through. Nobody among the top 16 on the leaderboard heading into the final round had ever won a major before Koepka prevailed.

Jordan Spieth provided some foreshadowing that the course could allow some weekend charges that fans love to see, similar to the back nine at Augusta National at The Masters. The record round by Thomas backed up his assessment.

"Certain holes, pins are in very difficult locations, but others are in bowls," Spieth said on Friday. "If you're in position off the tee, you can get it within three or four feet. So it's a course where I think you can create some excitement, like what Hideki did today. We did have the conditions to do that and you have to play some phenomenal golf. But it was definitely doable. And if you said someone is going to shoot 7 or 8-under today (Friday), I would have said absolutely. I don't know if that's going to be the case the next couple of days, but I think the tournament is very content with the score remaining where it is, or even going closer to 10-under par. And I think that keeps this golf course exactly where it should be."

The friendly scoring conditions early in the week left players mostly in good moods when talking about Erin Hills. Off course, a fiery blimp crash, a 94-year-old spectator passing away on Friday and an outbreak of E. coli bacteria at a hydration station have made headlines.

Here's a sampling of player reactions after round one:

* Lee Westwood: "I don't think it's easy. I think there's a lot more room than there normally is at the U.S. Open off the tee. And if you give the best golfers in the world this much room then you've got to expect good scores, especially with the greens having a lot of rain on them last night. The players out here now aren't intimidated by long golf courses. They're intimidated by tight golf courses. You expect there to be good scores this (Thursday) morning."

* Justin Rose: "The golf course has got plenty of moisture in it. It's the kind of golf course that if you're on point and playing well and you're in the fairways, you really feel like you can be aggressive and attack and make some birdies. But as soon as you get out of position on this golf course, you're really struggling and suffering for par. I felt like I slipped off a few fairways today, and didn't get all that fortunate with the lies that I got. But that's the way it's going to be around here. I think anytime you miss a fairway here, you got to expect a tough lie."

* Patrick Reed: "It's a great golf course. You know, I think it's one of those that can definitely hold majors. It's a golf course -- that's the thing, when the wind blows here they can set this thing up really hard. When I was here last week, I played the back plate of the back tee box on every hole. I asked how long is it. It's 8,155 (yards) from the back plates. So I played from there and there was maybe two-mile-an-hour wind. It was 70 degrees. It was a perfect day. And I've never had so many 3-woods, 2-irons and 4-irons into the green. It was just soft."

* Kevin Na: "It's a great golf course. It's a good design. It's a long golf course, but the shorter hitters somewhat have a chance, because the deep fescue, you've got to keep it out of the fescue. If you hit it in there a couple of times, you'll get a double. It doesn't play as long as the yardage books."

* Dustin Johnson: "Obviously, it would be interesting if it played really firm and fast. Right now, it's really soft. The greens are soft, so you can get to the green with any club. That's why you're seeing some big scores, because the greens are so receptive. I think if it got really firm it would definitely play difficult."

Before the tournament started, it was Na who fired the first shot at the Erin Hills Golf Course in tiny Erin, Wis., 45 minutes outside of Milwaukee.

His Instagram post on Sunday voicing concerns about the thick fescue lining the fairways at Erin Hills was the first criticism of the setup. Brandt Snedeker followed suit during a Tuesday press conference, saying “That rough is un-findable in some places, un-hittable in many places". The USGA's pursuit of making U.S. Open venues as tough as possible often brings criticism from players, especially following the controversial 2015 U.S. Open at Chambers Bay, another new venue like Erin Hills.

Erin Hills, like Chambers Bay, features fescue grass, with the major exception of the greens, which are bent.

Erin Hills is a great design course but the fescue is almost unplayable. BTW never found the ball. So don't hit it in there lol. straight hitters have a chance! #usopen #erinhills #mikedavis #lostball #usga

Dr. Michael Hurdzan, one of the three architects of Erin Hills, responded through Twitter with this simple tip for Na and other players.

The interesting thing is, when I played the course in 2011, I was warned about how unplayable the fescue was and how it would eventually thin out as it matured. Sounds like that hasn't been the case in some areas this week. Geoff Shackelford reported the thickness by the fairways is probably a result of "irrigation overspray."

Hurdzan's tweet had barely hit the internet before word got out that crews were mowing down fescue on certain holes. That drew the ire of McIlroy, the 2011 champion who ironically hit more than his share of tee shots in it in round one:

This is the final version of the reaction from players about Erin Hills, golf's newest major championship venue.