The future of mini golf is a war being waged by golf stars like Tiger Woods and Rory McIlroy.

Miniature golf has long been a fun afternoon activity for the family, but no diehard golfer believes it's anything akin to 'real' golf.

Participants can expect a couple hours of two-putts with a sporadic supply of windmills and an 18th hole that takes the ball back to give to the next set of smiling customers. Despite all the shenanigans associated with mini golf, or "putt-putt", there are signs that it is a vital part of the growth of the game.

The National Golf Foundation recently reported that 18 million people in the United States played mini golf an average of 4 times last year. One in three of those visitors play the conventional game of golf as well. These conventional golfers love to show off their true putting skills in a friendly game of mini golf and most likely take the experience way too seriously, myself included.

Mini golf has been yearning for a new look and style that makes the game fun for any age group and still challenging enough for the true golfer. Enter the biggest name in golf: Tiger Woods. Woods has invested in a business called PopStroke. Its rapid expansion over the past year is proving that it's a concept like no other.

PopStroke's newest location opened in early June in Orlando, Fla. I visited to see if all the buzz was justified. Having played hundreds of rounds of mini golf over the years, I figured I knew the mold, but PopStroke was an eye-opening surprise.

The future of mini golf is a war being waged by Tiger and Rory McIlroy, who is invested in a new indoor concept called Puttery that is also rapidly expanding. It seems we're entering a new era of luxury mini golf experiences with PopStroke and Puttery leading the way.

PopStroke has transformed a short activity into a potentially all-day affair. While the price is more expensive than traditional mini golf, admission is more than just one round. One payment gives you all-day access to two 18-hole courses designed by Woods' TGR design team.

All Tiger fanatics know that his tour ball of choice is a Bridgestone. PopStroke supplies every player with a PopStroke-branded Bridgestone to use during the round. The best part is you can take your Bridgestone home with you after your day.

The two courses, Tiger Black and Tiger Red, appear similar at first glance as Tiger eliminated the cheesy obstacles used on traditional mini golf courses. Traditional golfers might want to bring their own putters for the Red course because they will need to be locked in. It was designed to be more challenging with large amounts of undulation, bunkers and twists and turns that will test your true putting abilities.

The Black course features similar bunkers and turns but is ADA accessible for wheelchairs, strollers and those in need of a flatter course. While both courses are challenging, Director of Golf Operations Tim Glita said, “At PopStroke, everyone from ages 2 to 92 can come and have a good time.”

While these courses are stunning to the eye and tons of fun to play, what sets PopStroke apart is the overall environment and commitment to food and service above and beyond the mini golf.

At arrival, golfers are instructed to download the PopStroke app, which is a personal scorecard and beverage cart all in one. The app allows customers to keep a digital scorecard that feeds to a local leaderboard so they can compete with playing companions as well as the other visitors. This app also allows them to order drinks to be delivered on the course.

After paying the $25 fee, golfers can play these courses as many times as they wish. While the courses offer ice cold towels to help customers cool off during the round, the Florida heat is no joke and taking a break between rounds to enjoy the food and drinks is highly recommended.

Dining and Drinking at PopStroke

PopStroke offers a full-service kitchen with a menu packed full of upscale bar food. Visitors are free to sit and eat or stop by one of the several bars to grab a drink. While I personally suggest the bacon mac and cheese egg rolls, there is something for everyone on the menu. If a full meal doesn’t interest you, go for the 24 ice cream flavors and six specialty milkshakes to please your sweet tooth. Above being visually appealing, they are very tasty.

If your competitive juices are still flowing after you’ve put the putter down, a trip up the stairs to the beer garden might be in order. With foosball, cornhole and a bar close by, this is a great place to hang out with friends while you wait for a table or need a break from the course. This area is fit with several jumbo size TVs that display every sport imaginable.

Just below this beer garden is a playground gated in and safe for kids. While eating, drinking or playing a game of cornhole, you can watch over the kids so everyone can have their own fun. The playground is also easily seen from the Red course if the adults are looking to play and watch simultaneously.

From the true golfer’s perspective, mini golf is an enjoyable, almost-like-golf experience. But it’s also a good way to convince your friends who don’t play to put a club in their hands. Investors like Woods and McIlroy, as well as the NGF realize that building quality mini golf facilities could help brighten the future of the sport. These facilities single-handedly have the capability to grow the game one putt at a time. They are a introductory gateway to golf.

Golf continues to work very hard to expand its diversity and gender demographics and make the game more accessible for all. Maybe mini golf with bunkers and hazards just like a real course can be part of the answer, just as Topgolf has enhanced the driving range experience for golfers and non-golfers alike.

The statistics released by the NGF provide an interesting argument that mini golf could be the next big thing for the growth of the game. A staggering 67% of mini golfers are women and children, which is a percentage the real sport has not come close to reaching despite increased efforts. And with 54% of mini golfers under the age of 35, mini golf has broken through golf’s age barrier. Businesses like PopStroke Orlando are getting a putter and a real golf ball into the hands of women, children and the next generation of new golfers.

PopStroke's national expansion will continue that trend. It has built its roots in Florida with Orlando as its fourth location, following Port St. Lucie, Fort Myers and Sarasota. Expansion plans are well on their way with two more Florida locations to open this year. Nationally, two Arizona and one Texas location should open by 2023 as well.

From Tiger head covers to signed memorabilia and PopStroke merchandise, Woods’ name is all over the Orlando facility and rightfully so. Even though he isn't No. 1 in the world anymore, he's still making an impact on the game.

“Tiger has already grown the game of golf tremendously," Glita said, "and PopStroke is just another avenue for him to do that."

Libby Gilliland
Libby Gilliland, a Division I golfer at La Salle University in Philadelphia, is an intern with GolfPass.
0 Comments
More from the author 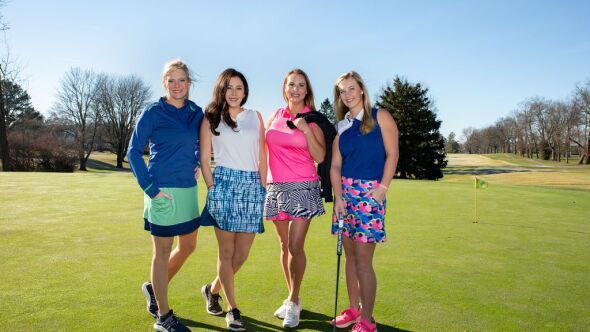