If you're in the market for a push cart, get in line. Due to social distancing mandates and new golf cart rules, trolleys have never been more popular in the U.S.

If you're shopping for a push cart, get in line and take a number.

The fallout from the coronavirus pandemic has put a strain on the push cart market. Major retailers are reporting that they are sold out and won't get new product in for several months. Trying to buy one online through a third-party like eBay or Craigslist will set you back considerably, as prices have soared for new or used models. I found a $260 clicgear model for $500 on Craigslist.

The madness started as courses started adjusting to social distancing rules in mid-March. Some states mandated that courses only allow one rider per cart or no carts at all. Walking was encouraged, perhaps for the first time at many facilities. For many golfers, carrying a bag just wasn't feasible. And here we are.

"There's been a tremendous rush for push carts," said Craig Ramsbottom, the president of Dynamic Brands, which sells popular BagBoy models like the Nitron. "It caught us off-guard. The demand, it’s hard to describe. ... Over the last week, we got down to zero carts. It's amazing. Whether it was a slower moving model or color, anything and everything sold."

Push carts have always had a niche audience in golf but never widespread acceptance. Many golfers stick to riding in motorized carts. Others think push carts are only for old-timers or blue-collar golfers. Some high-end clubs ban their use. Maybe this new reality will bring a brighter future for the push cart mafia.

Demand isn't the only reason push carts are scarce. Supply chain disruptions from Asia and working-from-home protocols aren't helping. Also, many push carts have complex manufacturing, including many small parts that need to be made and then attached before the item can ship to retailers.

Clicgear's website indicates it is sold out of pushcarts and asks customers to sign up for its mailing list to be notified when more are available again. Ed Kowachek, the president of Sun Mountain Sports, said all four of his company's push cart models sold out by mid-March. Sales are expected to double in 2020.

"It takes time to ramp up production for a host of reasons, including supply chain for the various pieces and parts needed to make a push cart and construction time to put all of those pieces and parts together," he said. "Not to mention this higher demand comes at a time when production speed and capacity is limited due to new procedure and protocols in maintaining a safe work environment due to COVID-19."

Ramsbottom said BagBoy has begun selling to consumers a sturdier model of push cart that is normally reserved for resorts and courses to use as a rental. The M350 costs roughly $100, half the price of the other styles. BagBoy has ramped up a second production facility to get new product in before the end of the summer. Ramsbottom expects sales to triple in 2020.

“There’s molded parts. There's wheels and tires, aluminum, plastic, bungee straps. You are sourcing a lot of different products," Ramsbottom explained about the complexity of the manufacturing process. "They have to be assembled, packaged and boxed. It is a 90- to 100-day lead time. We all saw the demand in March and April. Now we're looking at July or August until you can get back in (to selling)."

Brad Payne, who has launched a new company called Walker Trolleys, has been waiting nearly two years to get his new product, the Cape model, to his first customers in June, but the supply and manufacturing issues have led to a minor delay. Pre-order sales are still going strong.

"I feel almost guilty that it (the pandemic) has been good for us," he said. "So many courses are going to walking only. We have sold through our first production order. March was okay. April great, and May is looking better than April."

Over the last decade, push carts have gotten smaller and lighter, so golfers can easily transport them from the trunk to the course and back home again. Push carts can have three wheels or four. For example, Sun Mountain's three-wheeled Pathfinders weigh 16 pounds and fold to dimensions of 29 by 13 by 17 (inches) and four-wheelers that weigh 17 pounds and fold up to 26x16x14.

Ramsbottom said the Nitron has lapped its competition because of how easy it opens and closes.

"It opens itself," he added. "Compared with the traditional cart that can be 3 to 5 steps (to open or close), the ease of use has come a long way. We have taken that feature to a level that our competition can’t compete with.” 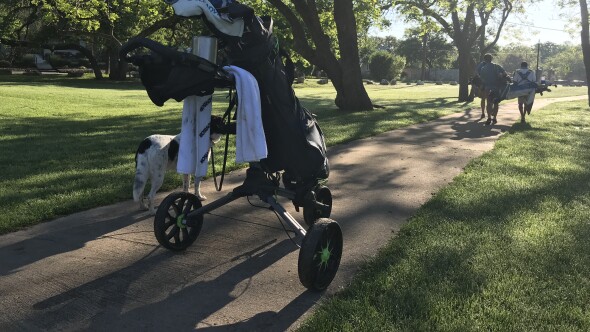 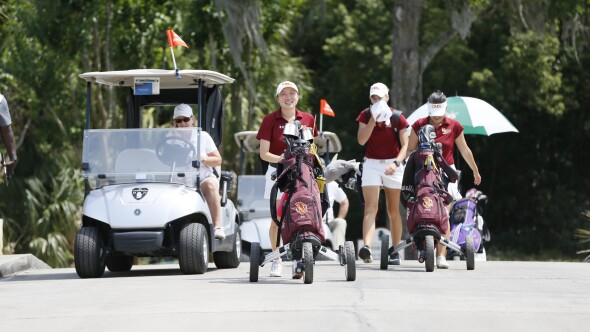 Articles
Ain't no shame in your push-cart game
Some NCAA Championship viewers, including pro golfers, didn't like the look of the push/pull carts on their TV sets. But Brandon Tucker has recently become a believer.
2 Min Read

The first model of Walker Trolleys costs $400 due to high-end materials, Payne said, such as waxed canvas, leather and anodized aluminum. Their design draws inspiration from the roadsters and classic bicycles from the 1920s and 30s. "We are working with a stroller manufacturer. The way that we think of a push cart is to make sure we offer the longest-lasting quality. That's how we differentiate ourselves," he added.

Payne hopes to make push carts "cool." The pandemic might be helping his cause. All the golfers who have recently invested in a push cart has created an army of supporters. Will they keep pushing when the pandemic is over?

"There will be a lot of examples where it goes in the garage and collects dust," Ramsbottom admitted, "but there will also be a number of people who will realize that it’s worth continuing (to walk).”

Payne said he is talking to private club managers who might allow pushcarts on their courses for the first time this summer, especially if caddie programs are disrupted. Another example is the walking-only Erin Hills Golf Course in Wisconsin, which is beginning its "touchless" 2020 season without carry-bag caddies, but rather a new fleet of push carts for its players plus a forecaddie that tags along with each group.

“Can we make it acceptable with the masses? There are a lot of people who say 'no'," said Payne. "I think it will. ... There is a lot of momentum. People will start to reconsider push carts.”

What's your stance on push carts? Are you seeing more at your club? Let us know in the comments below.

Jason Scott Deegan
Jason Scott Deegan has reviewed and photographed more than 1,000 courses and written about golf destinations in 20 countries for some of the industry's biggest publications. His work has been honored by the Golf Writer's Association of America and the Michigan Press Association. Follow him on Instagram at @jasondeegangolfpass and Twitter at @WorldGolfer.
95 Comments

I got your, "trolley!" America wisely left your so-called empire 250 years ago and except for temporary glitches. Carts, Baby, Carts! That's the F-R-E-E-D-O-M we won and will treasure.

I'm seeing an increase in push cart use at my home course mainly because mine is not conducive to using them. There are several holes requiring a long walk either uphill or downhill. The hills are steep. It would be great exercise without pushing a cart. However, it's dangerous with one. I've personally witnessed a young golfer lose control of his push cart and fall. I'm an avid exerciser & would love to walk my home course with my push cart, but it's just not a wise option. That said, I'm seeing more push carts but definitely not many simply due to the terrain.

My golf course is making you share a golf cart like it or not. I will be using my push cart and enjoying the walk. There is no way to practice social distancing when you are force to share a golf cart. Surprise they can do that.

I am a stroke survivor so walking for me is out of the question. I have played courses that were obviously designed only for riders as the distance between green and next tee box is an outrageous waste of real estate. add that to very rough terrain, elevation changes and you have impossible walking courses.

Until social distancing ends it appears riding 1 per cart is the acceptable answer.
But courses are already greens fees higher due to the cart issue. So eventually to make golf affordable for the average weekend golfer pull carts will have to be used.

Still using a pull cart. It’s got over a thousand rounds on it and the original cost was just over $10 . My per round cost is under a penny. Bought it because it was very simple. My previous carts would always fail with a weld breaking or some minor part failing that you couldn’t easily replace. $400 for a new push cart Bah Humbug

Just a faze that will disappear as soon as these inane restrictions are lifted. In two months, you will be able to get a standard push cart on Craig's List for about $25 and a motorized one for around $200.