Raven Golf Club at Three Peaks in Silverthorne, Colorado: One of the best golf experiences in the Rocky Mountains 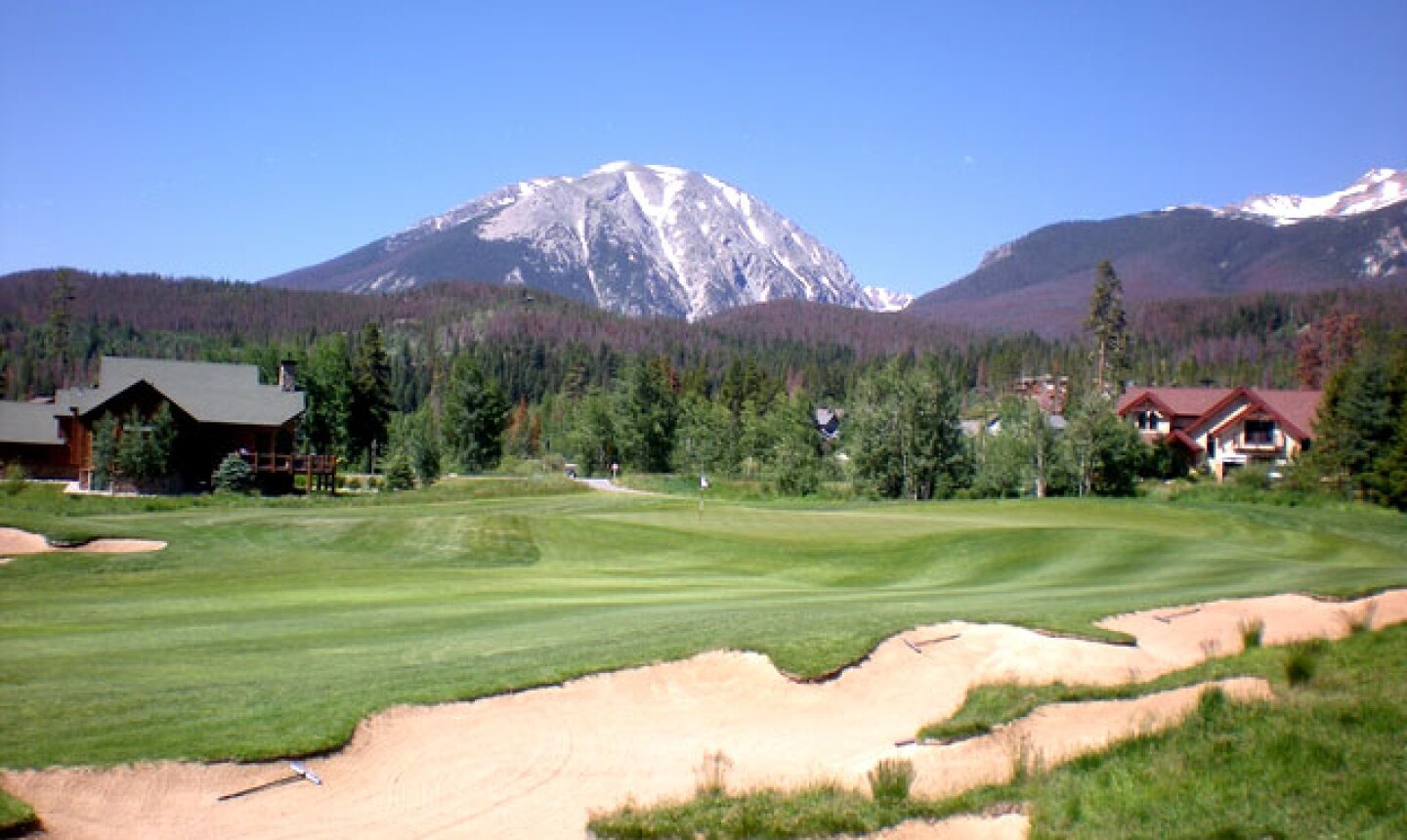 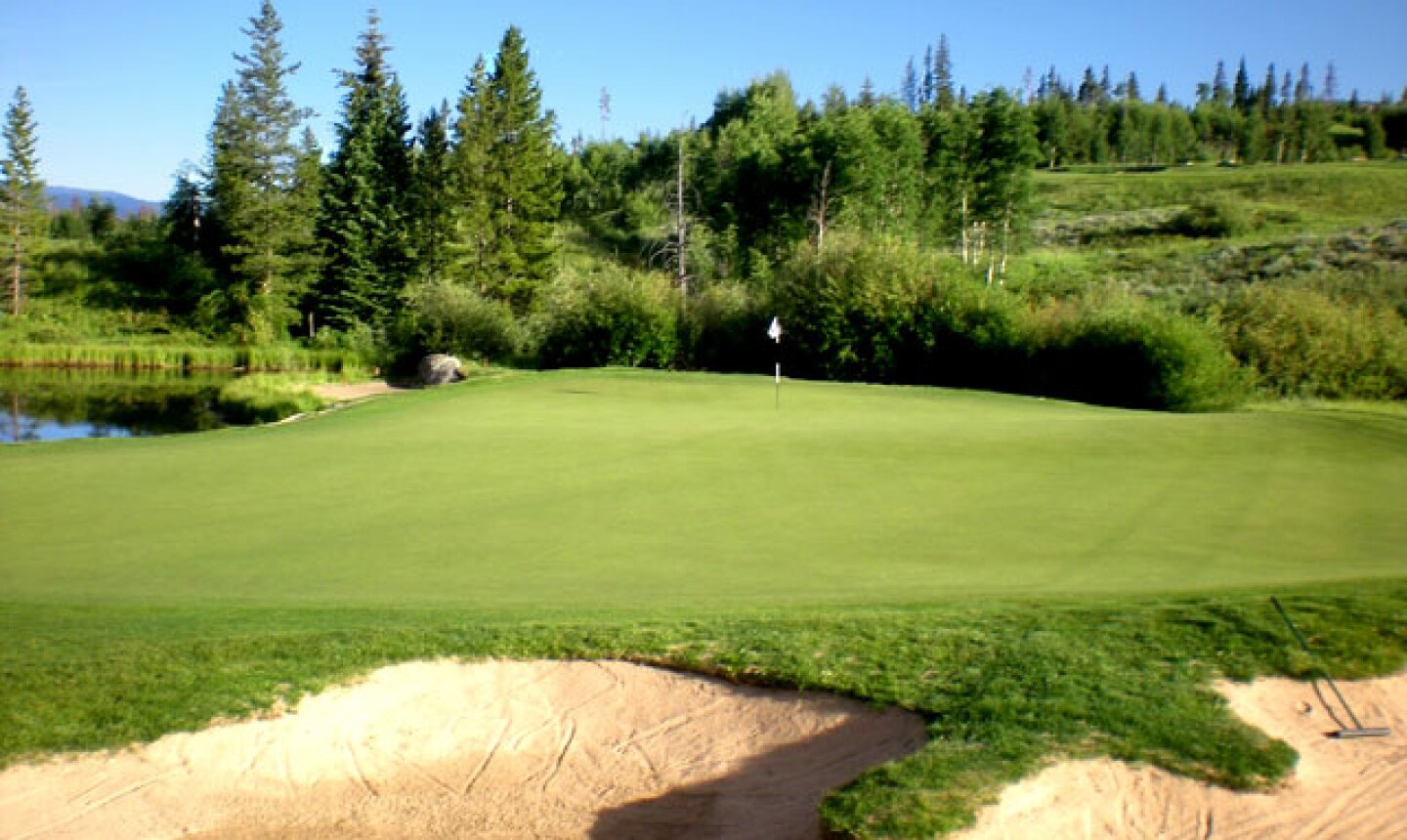 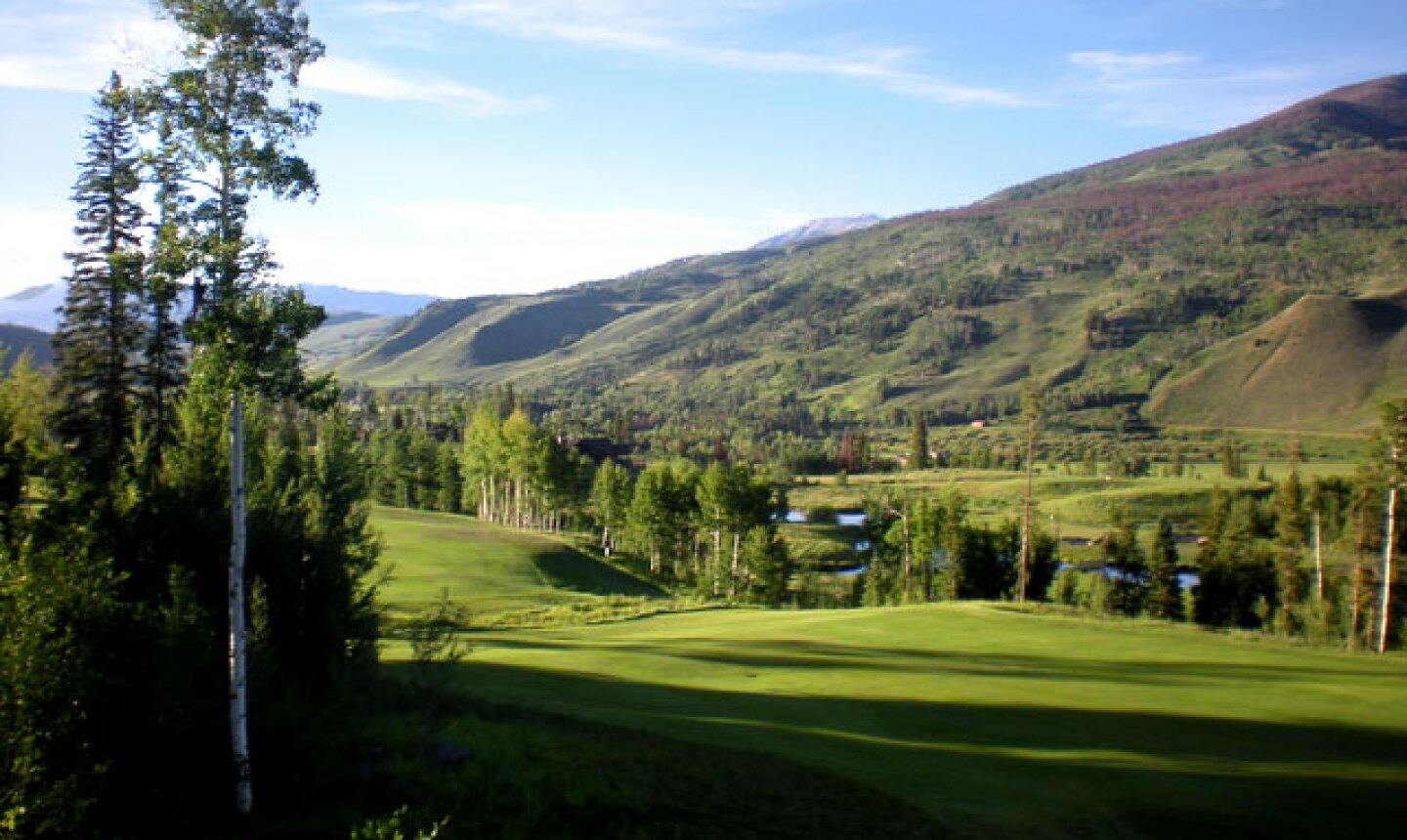 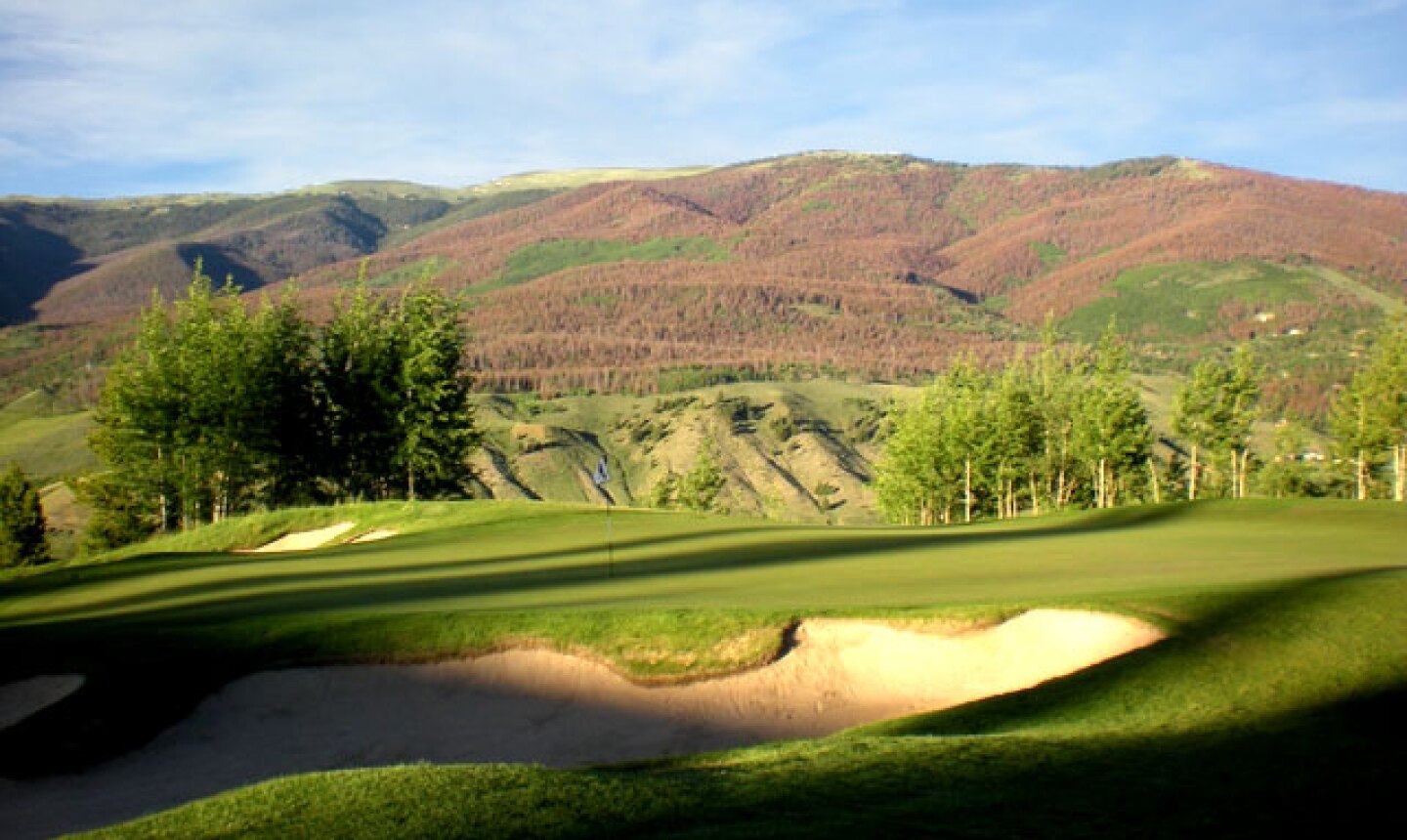 SILVERTHORNE, Colo. - A lot of people preach the praises of the Raven Golf Club at Three Peaks as one of the best golf experiences in the Rocky Mountains.

The golf course even has an admirer with celestial connections: James Robison, a Fort Worth-based television evangelist, founder of Life Outreach International and co-host of the Life Today Television Program says:

"My wife Betty and I have spent several weeks in Colorado during the summer for the past five years. It has been my special privilege as a guest of members to play Augusta National, Pine Valley, Cypress Point and also Pebble Beach. I consider The Raven at Three Peaks second only to Augusta as my favorite of all. The course design, challenge and unsurpassed beauty are exhilarating and anyone can play this great course."

That's quite a testimonial.

For many, however, The Raven at Three Peaks is motivating for numerous reasons. Perhaps it is the Alister MacKenzie-inspired bunkers, which have fingers and noses that blend into the natural erosion patterns of the mountainside and are surrounded by tall native grasses. Or maybe it's the unparalleled backdrop of the Three Peaks of the Gore Range - Red Peak, Thorn Willow and Buffalo Mountain - plus distant panoramas of the Williams Fork Range and the Ptarmigan Wilderness.

Want more visual stimulation? There's a massive osprey nest on a man-made scaffold at the end of the third hole. Trout fishing is also in sight in the Highline Creek and the Blue River. From its loftiest fairways, at 9,100 feet, there's a vista of the ski slopes of Keystone Resort. And in the fall, when quaking aspens turn to gold and there's a chill in the air, one might even feel closer to a spiritual experience. We even saw a rare Colorado sight - a moose munching tender willows.

Whatever moves you on a golf course, The Raven Golf Club at Three Peaks has it.

The Raven Golf Club at Three Peaks: Want to score low? Keep your eye on the fairways

Born as Eagle's Nest Golf Club in 1986, the property was completely rebuilt by Michael Hurdzan and Dana Fry in 2000 with consultation from PGA Tour player Tom Lehman. Bulldozers made sure the old golf course was dead and buried.

"What I really like is the fact there's only one blind tee shot," said Elcio Silva, operating partner of the boutique company Escalante Golf, which owns and operates high-end golf properties around the country. "The design philosophy of Dr. Hurdzan is that most golfers are kinesthetic, where you actually carry out the physical part of golf, or that golfers are visual. I think he hit on the two main aspects of how people play golf."

In other words, when you play here you will be seeing the ball in flight to landing 99 percent of the time. And at such a high altitude, that makes your hang-time even more dramatic - something Lehman also realized, insisting it included generous fairways.

The Raven Golf Club at Three Peaks: The verdict

This golf course is demanding. Stray from the charitable fairways on this 7,413-yard, par 72, and you have a dilemma. Find too many bunkers and you are adding strokes. Fly over ponds to too many sucker pins and feel despair. Fail to get a handle on the contoured and tricky greens and your score will soar to Rocky Mountain heights. Play from the right tee and you will be fine.

"I don't think it is the best hole, but the most memorable is No. 9," Silva said of the ski-slope downhill par 4 of 514 yards. "Even if you boom a drive you are going to have a long iron into a green that has bunkers left and a putting surface that falls off into a pond right."

"The defenses on this hole are formidable," Silva said. "You better bring all your shots."

Fairway bunkers gobble up off-line drives and the approach requires a crisp, accurate stroke to a deep green surrounded by more MacKenzie bunkers.

The Raven Golf Club at Three Peaks is all-inclusive. That means for a peak rate of $180 you get greens fee, golf cart with GPS, practice facility, continental breakfast, complimentary snacks and non-alcoholic beverages from the beverage cart during your round, lunch (your choice of buffet or menu items including non-alcoholic beverages), and yardage book without having to tip.

For any group outing of 16 or more people, a complimentary half hour golf clinic is included from one of the golf staff professionals. They will even do all the scoring and arrange an awards presentation.

After a long day on the golf course check in to The Lodge at Carolina in the Pines (864 Anemone Trail, Dillon, Tel. 970-262-7500). Here an entire group can stay with full kitchen, pool table, wireless internet and hot tub.

On your way to the high country, spend the night in Lower Downtown (LoDo) Denver at historic The Oxford Hotel (theoxfordhotel.com or Tel. 303-628-5400), after arrival at Denver International Airport, and walk to a Colorado Rockies baseball game at Coors Field.

David R. Holland
David R. Holland is an award-winning former sportswriter for The Dallas Morning News, football magazine publisher, and author of The Colorado Golf Bible. Before launching a career as a travel/golf writer, he achieved the rank of Lieutenant Colonel in the Air Force reserve, serving during the Vietnam and Desert Storm eras. Follow Dave on Twitter @David_R_Holland.
0 Comments
Related Links 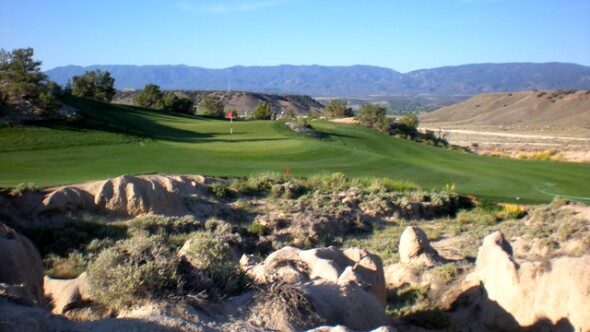 Articles
4 Min Read
At Four Mile Ranch Golf Club in Canon City, Colorado, Jim Engh aims to get golfers pirouetting
One of Jim Engh's main goals in designing Four Mile Ranch Golf Club was to replicate the pirouette-prompting views found on the top courses in Ireland. He's quite happy with his efforts. "Everywhere you turn at Four Mile Ranch you see something that interests you," Engh said. The result may be an idiosyncratic mishmash - but all in all, this is fun golf.

Kira K. Dixon
Lifestyle Correspondent
Now Reading
Raven Golf Club at Three Peaks in Silverthorne, Colorado: One of the best golf experiences in the Rocky Mountains
New Cookie Policy
WE AND OUR PARTNERS USE COOKIES ON THIS SITE TO IMPROVE OUR SERVICE, PERFORM ANALYTICS, PERSONALIZE ADVERTISING, MEASURE ADVERTISING PERFORMANCE, AND REMEMBER WEBSITE PREFERENCES. BY USING THE SITE, YOU CONSENT TO THESE COOKIES. FOR MORE INFORMATION ON COOKIES INCLUDING HOW TO MANAGE YOUR CONSENT VISIT OUR COOKIE POLICY.
CONTINUE
Search Near Me