Push carts aren't the only mode of golf transportation gaining in popularity during the coronavirus era.

When states started issuing strict cart mandates, only allowing one rider per cart or no carts at all, to meet social distancing guidelines, it opened the door for alternative vehicles to make a move. Single-rider transports like GolfBoards and Finn Scooters have been on the fringes of the game ever since the GolfBoard launched six years ago. Both operators and golfers might finally be more accepting of these upstart modes of transportation.

GolfBoard President Jeff Dowell said business the past two months has been a "landslide." Currently, there are approximately 3,000 GolfBoards at 300 courses nationwide. He believes new business this year will grow sales 50 to 100 percent.

"This could be a game changer for us," he said. "When you say individual rider, the first thing that comes to people's mind is the GolfBoard. We are hoping that this is the tipping point (for acceptance)."

The rise of single riders

Single riders make a lot of sense in today's climate. Golfers can ride without fear of getting too close to their playing partners or worry about sharing touch points. There's no plastic shield necessary to separate cart partners. Drivers can stay as far away from people as they feel comfortable.

Finn Scooters, which launched last year, are also experiencing a boost. Ed Kowachek, the president of Sun Mountain Motor Sports, the creator of Finn Cycles, said business has more than doubled the last 6-8 weeks. Courses had leased roughly 300 Finn Cycles by the end of 2019. He expects more than 1,500 to be available at courses by the end of the year.

I've ridden the GolfBoard at least three times and they're great fun as long as you have some natural balance and enjoy surfing, skiing and/or skateboarding. There's a learning curve, though, and they can be difficult for beginners to steer, especially on hilly terrain or missing curbs on cart paths.

Tetherow, a popular resort in Bend, Oregon, has long been a hotbed for GolfBoards, but Finn Scooters are gaining steam. Nicole Ward, Tetherow's golf shop manager/merchandiser, said the resort offers a fleet of 12 Finn Scooters as rentals and that at least 12 members bought one once they tried it.

Westin Kierland in Scottsdale, Ariz., is also an industry leader in single transports. I rode the Ellwee, a sort of golf ATV, during a round last year. It offers golf bikes and the motorcycle-like TurfRider.

Dowell said many operators don't have room in their cart barns to order more carts, so they are turning to GolfBoards, which take up less space. He added that operators also like the single-rider transports because they don't cause as much wear-and-tear on the turf.

"One operator I talked to said 'I looked out to the first tee and saw 12 carts, four by the green, four in the fairway and four at the first tee. That's just ripping the pieces out of the place'," Dowell said.

GolfBoards and Finn Scooters are light enough that riders are allowed to park them near the greens at Tetherow, instead of driving the golf cart to the path. That speeds up play.

"Their footprint is smaller," Ward said. "There's not much impact on turf."

The future of alternative golf transportation: Fad or Trend?

The question is, how will long will golfers stick with single transports once cart restrictions are lifted? Is this a COVID-19 fad or a long-term trend?

Price is perhaps the biggest obstacle for the staying power of alternative modes of transportation. Ward admitted there will likely always be an up charge to rent one. A golf cart is included in Tetherow's green fee, but riding a GolfBoard or Finn Scooter costs $20 more. Unless you buy your own, of course. Both Dowell and Kowachek said direct sales to individuals is also on the rise during the pandemic. Finn Scooters cost $3,500+ and GolfBoards run $6,500-$7,500.

"We may live under these guidelines for a while, so long that it (single-rider transports) may become the norm," Dowell said. "Once people realize how safe and fun they are, it may change the industry."

How likely are you to try and adopt using single-rider transports should they come to your course? Let us know in the comments below. 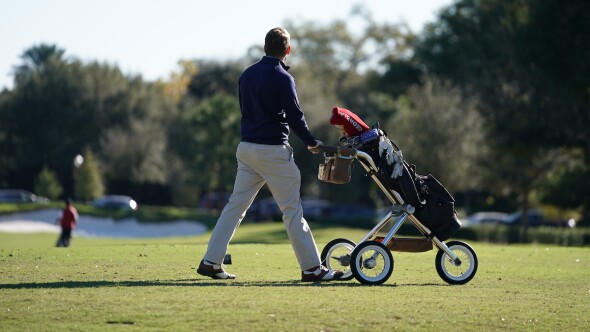 Articles
Social-distancing guidelines have golfers craving push carts
If you're in the market for a push cart, get in line. Due to social distancing mandates and new golf cart rules, trolleys have never been more popular in the U.S.
5 Min Read 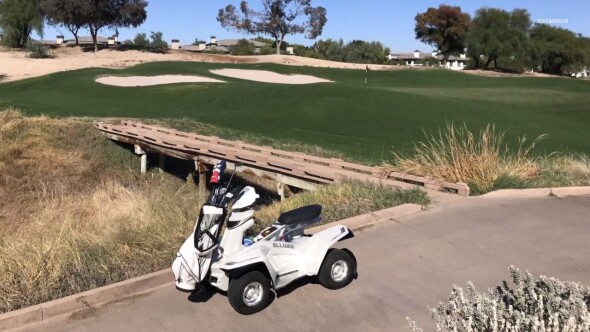 Articles
Bored with cart golf? Try these
Adding a round using an alternative mode of transportation could spice up your buddies golf trip.
3 Min Read

Jason Scott Deegan
Jason Scott Deegan has reviewed and photographed more than 1,000 courses and written about golf destinations in 20 countries for some of the industry's biggest publications. His work has been honored by the Golf Writer's Association of America and the Michigan Press Association. Follow him on Instagram at @jasondeegangolfpass and Twitter at @WorldGolfer.
21 Comments

I have one. Paid annual trail fee at my golf club in Carmel Valley and plugged it in the cart barn when not in use. I am 73 yrs old and getting in and out of a cart is for 18 holes is challenging. Golfboard easier.

LOVE the Golfboard. Saw my first one in Hawaii @Princeville. Then found a local course near my house that has them. They are fun and you play in 3 1/2 hours as a foursome. Been trying to get my Club to get them, but they are resisting

I advocate single ride options for golf. However, my preference is a green, environmentally-friendly solution...riding (by pedaling!) a bike. Golfbike out of Tallahassee sells them. Get healthy not lazier!

I've used the Segway at Kierland Resort and the Golf Board at my home course of Sandia Resort. Of the two, the Golf Board is much easier to learn how to use. Have not tried the Finn Scooter but will the first time it becomes available locally. It looks like fun, as were all the single player transports I've tried. If you haven't tried them yet, give 'em a try!

My home course, LaPaloma, in Tucson is simply too hilly, and heavily mounded to permit safe use of scooters, bikes, or boards— what a recipe for disaster and LIABILITY. Not only that, there are many golfers who are smart enough not to get on one of these things..The atv-like Elwee seems like the perfect solution. Why hasn’t someone produced a tricycle- like scooter which would be safe and stable ?. We have also noted with one rider to a cart For social distancing and state mandated public health guidelines, that ready golf and pace of play are dramatically improved.

I own a Finnscooter and have used it on Rocky Mountain golf courses.. Takes a bit more strength to park on a severe slope but, like downhill skiing you just learn how to find the flat spot perpendicular to the fall line.

I've tried the golfboard and it was actually good exercise. When it is hot out (100 degrees today), I need shade and an occasional sit down, and the golfboard I tried didn't have a seat although I understand that some have a cooler you can sit on. I am a senior and have some health concerns. When sharing a regular cart with a buddy, I get more exercise walking to my ball, and I get to sit down for a breather. I like walking a lot, but only when the outside temperature is 40-60 degrees. Given the damage the carts do to the fairways, it doesn't seem reasonable to have four carts for a foursome. Perhaps a redesign to allow two riders with appropriate distance?

I enjoyed the golf board but still prefer a cart with a top to get out of the sun or a heavy down pour here in Florida.

For an extra $20 at the one Oregon GC l would rather use a cart. I have one course near my home that is very walkable which I’ve done in the past. Yes, I was beat after walking the course but that was good exercise as well. Another course a few miles from my home is walkable but the course is better suited for carts. For the cost of renting the golf board or the Finn Scooter I’d choose a cart instead.

I am so ready! Had to walk 18 the other day and carry my clubs since they ran out of carts...basically wiped out after the round. Most courses here in SCal aren't even offering single carts...walking only! I would definately rent one if they were available and seriously consider buying one if I could use it as a mode of transport on the street as well!

GolfBoards and ResortBoards are street legal in the state of California. GolfBoards are great on hills also as they are all wheel drive. Feel free to call me at 310-729-7000 with questions.