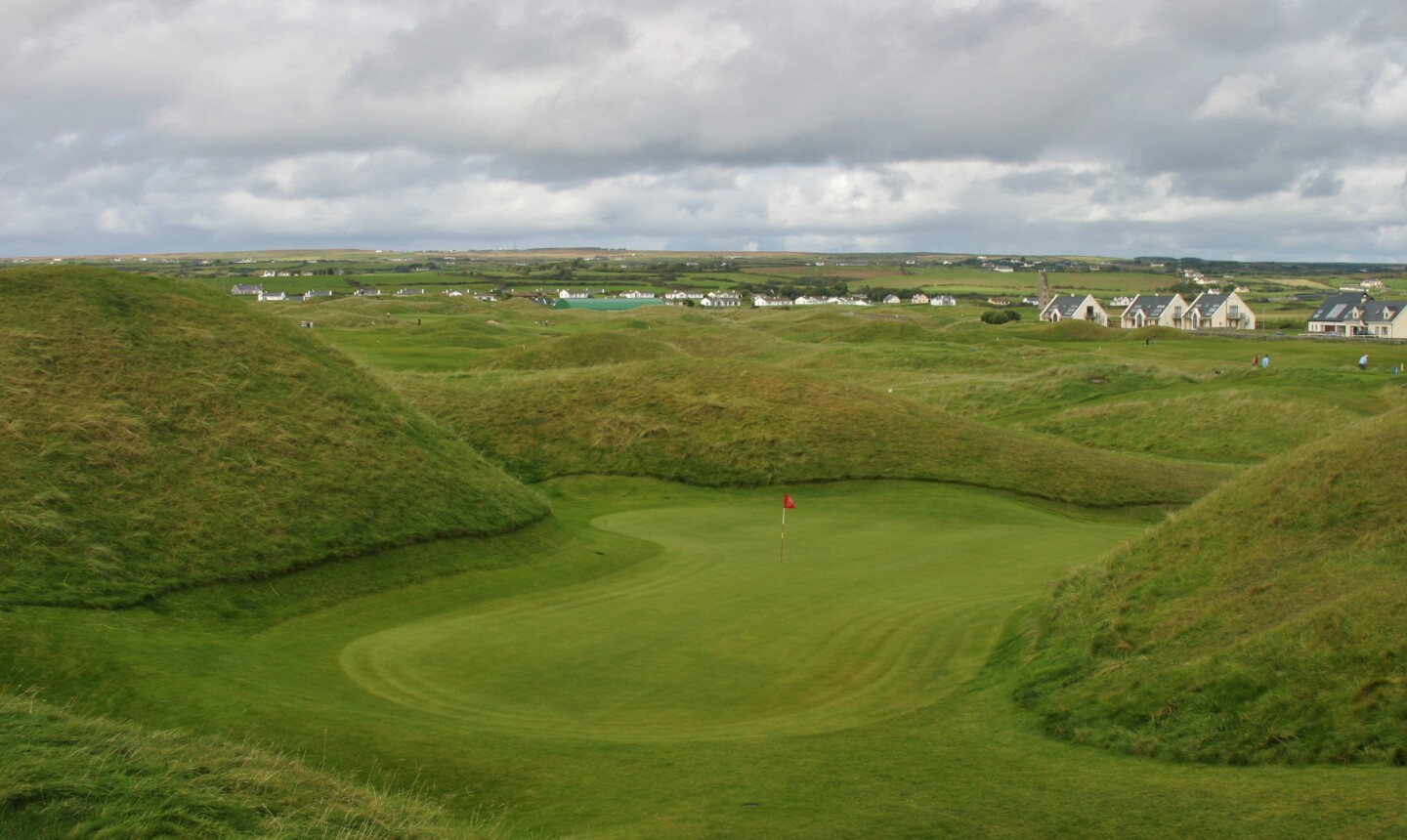 Dunes hide the green from golfers on the famous "Dell" hole on the Old Course at Lahinch Golf Club. Jason Scott Deegan/Golf Advisor 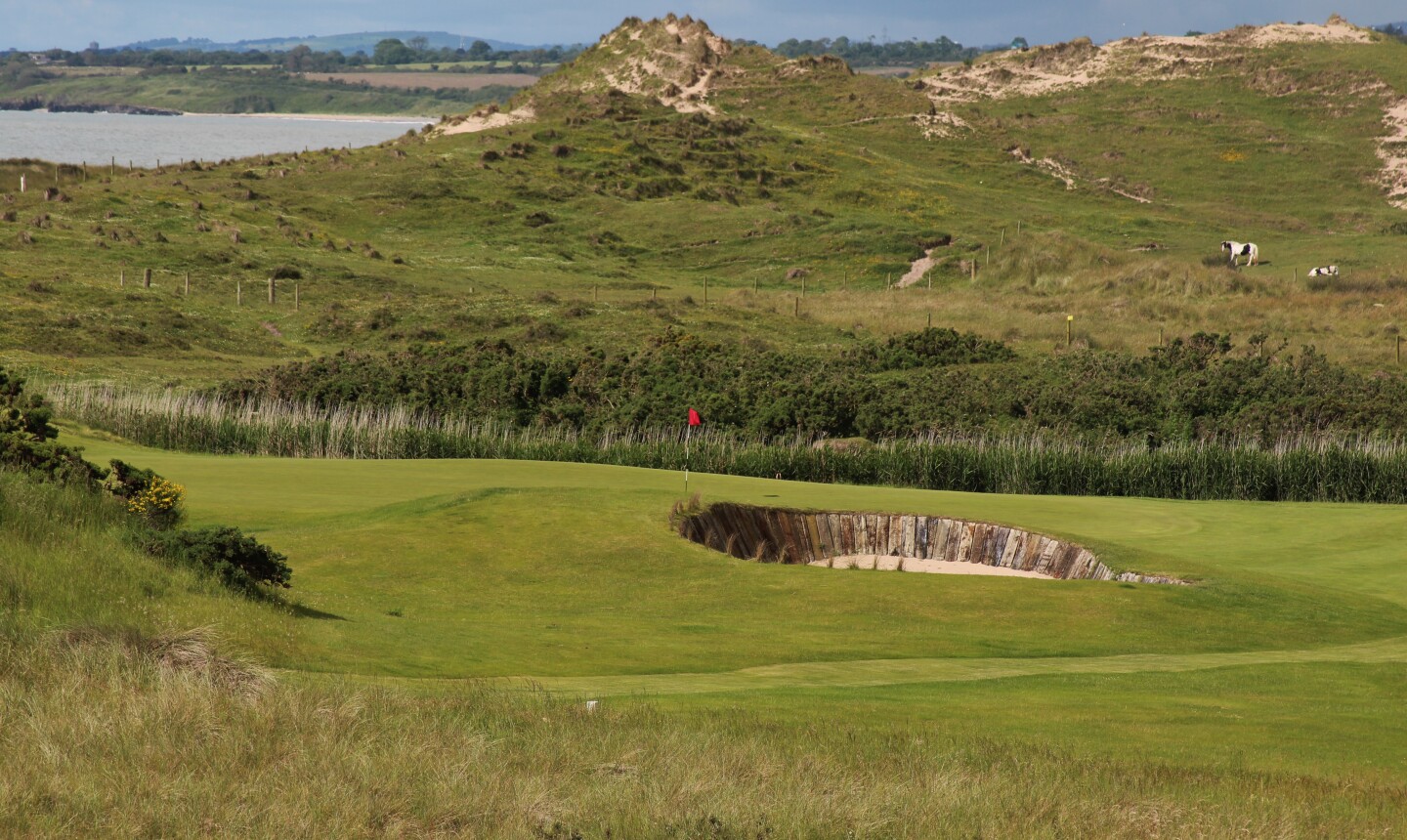 The views around the seventh green at The European Club hijack the senses. Jason Scott Deegan/Golf Advisor 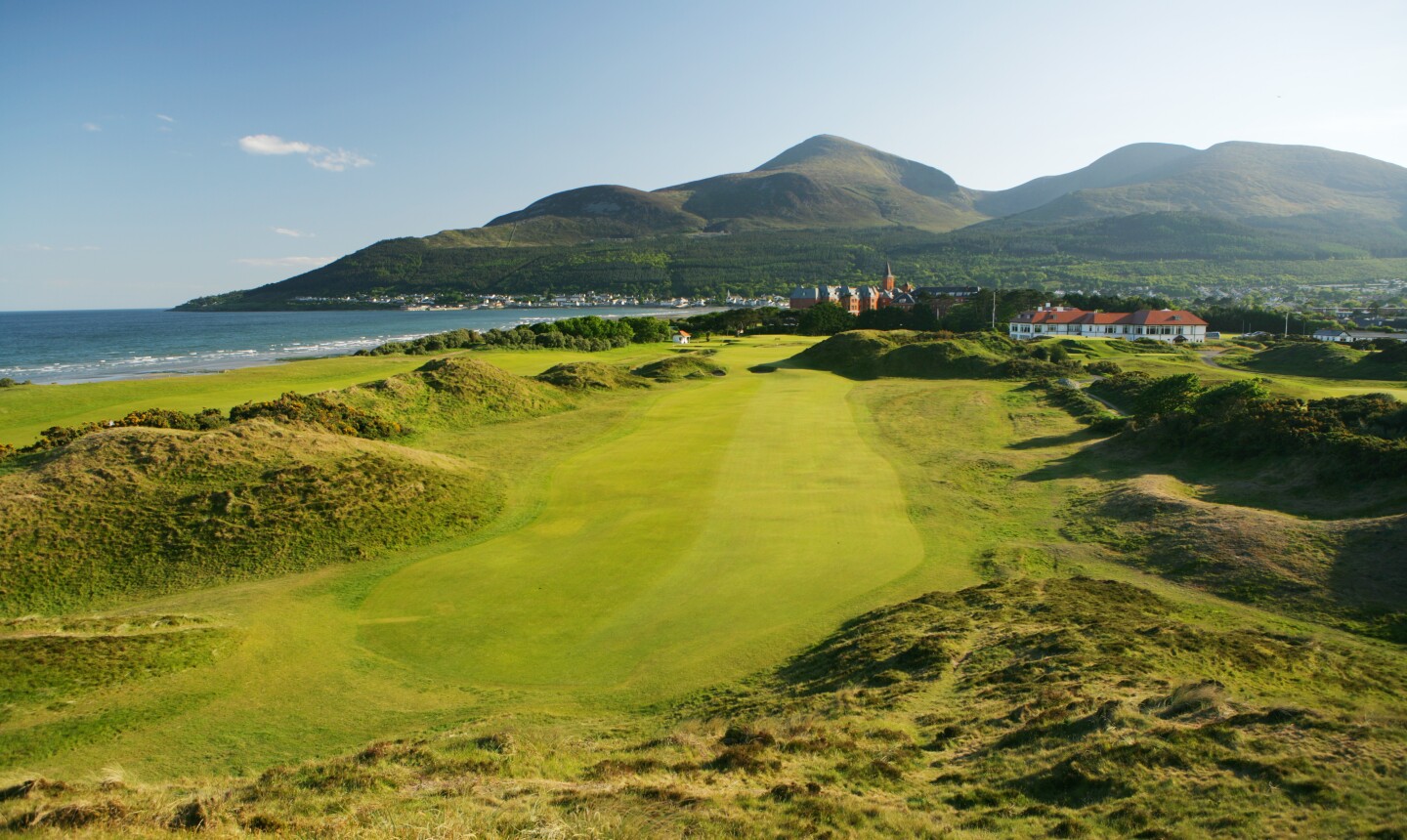 After a blind shot from the ninth tee, golfers trudge up a dune to reveal this spectacular view at Royal County Down Golf Club. Getty Images 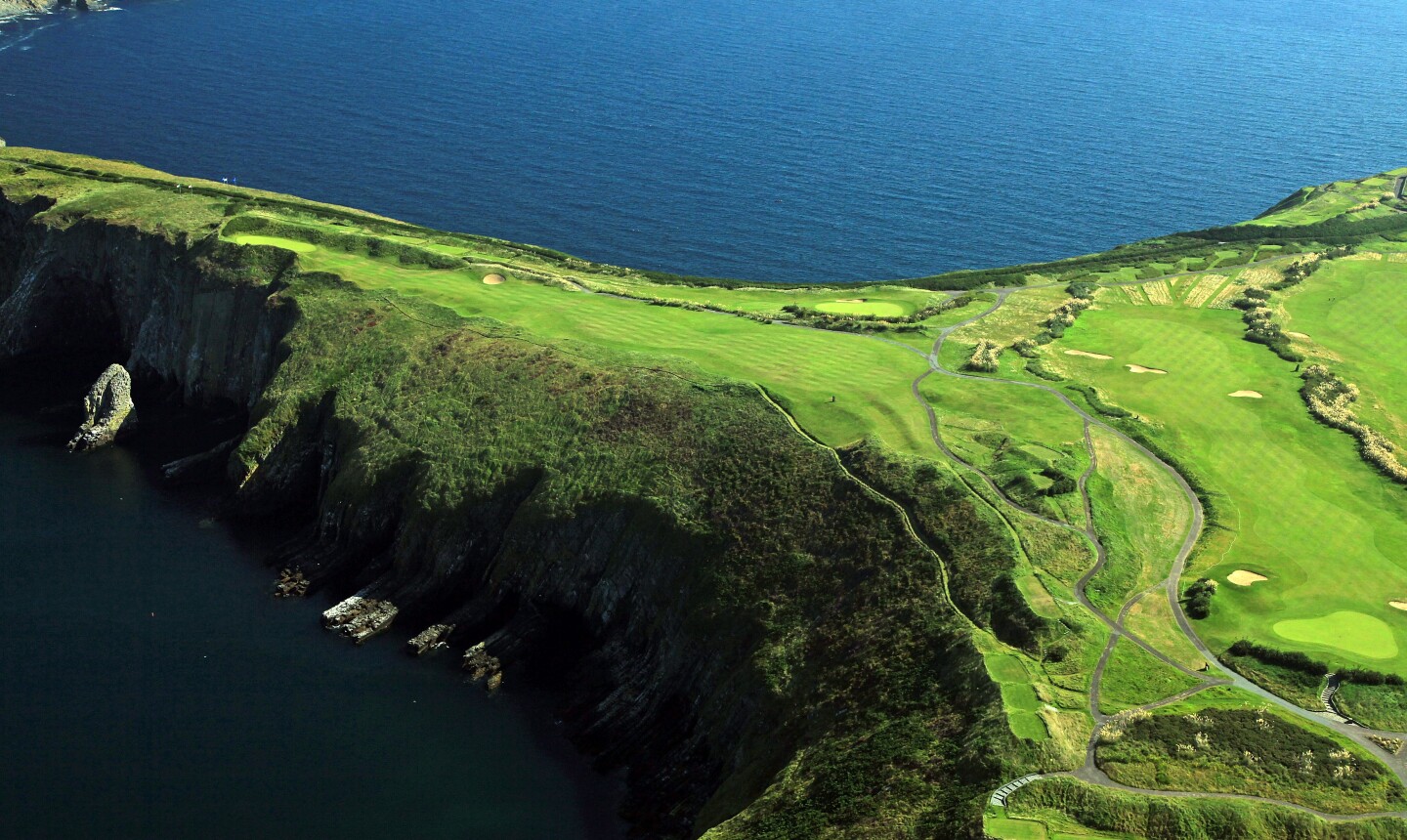 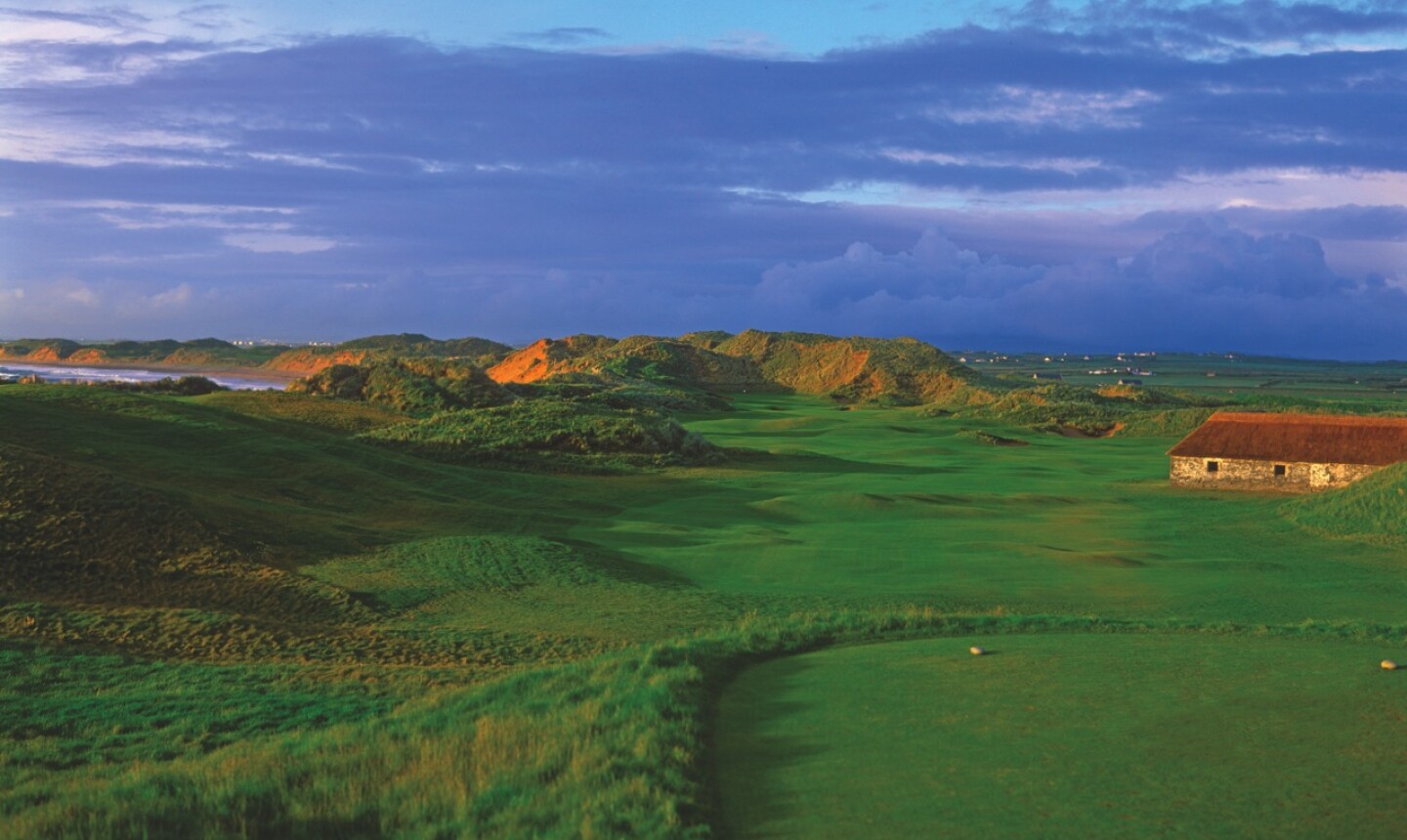 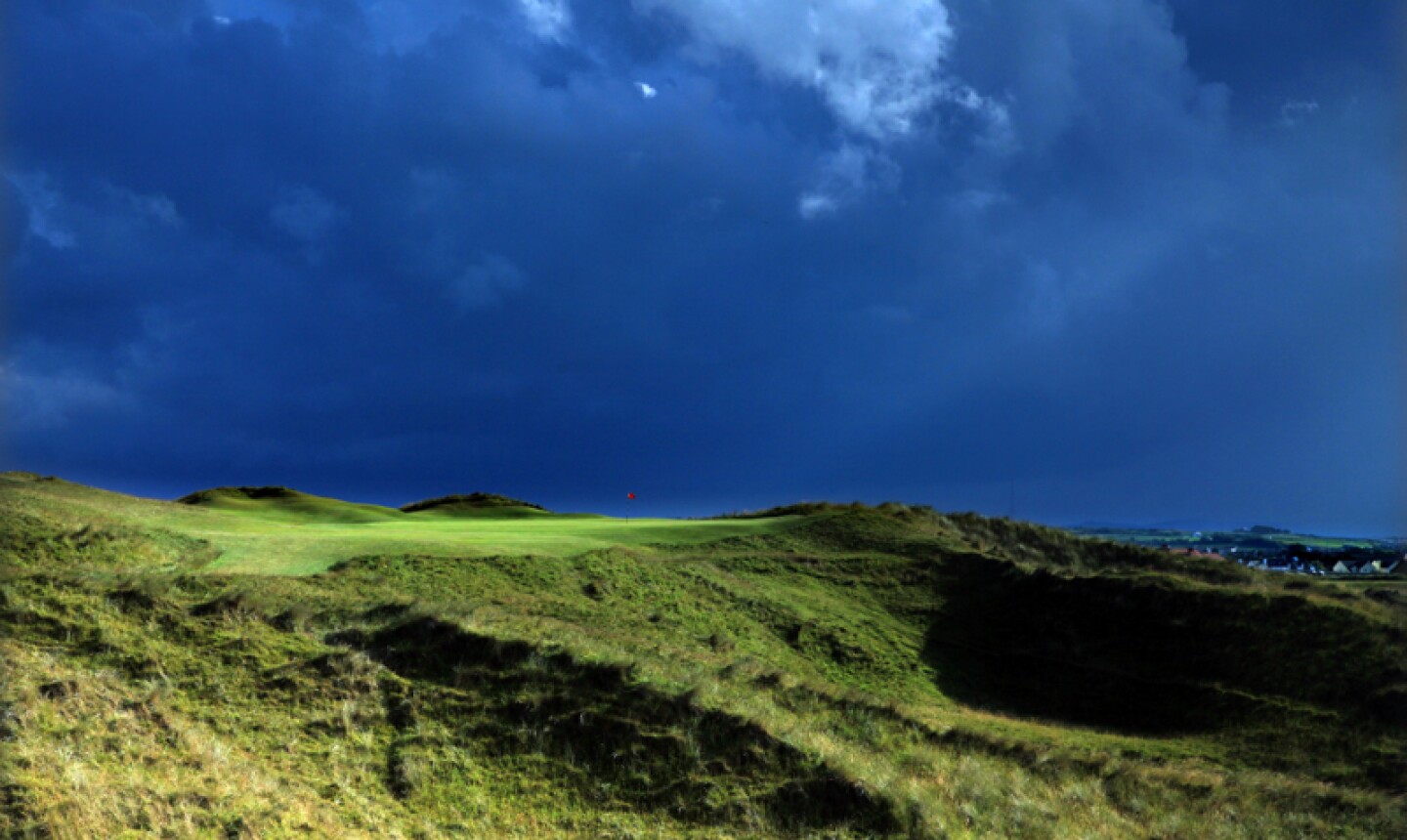 No. 14 on the Dunluce Links at Royal Portrush Golf Club is one of the most famous par 3s in the world. Getty Images

It seems everybody wants to be Irish on St. Patrick's Day.

It's all about being green -- the beer, the beads, the "Kiss Me, I'm Irish" T-shirts, the temporary shamrock tattoos.

Let's celebrate a different shade of green this St. Patrick's Day -- the 18 best golf holes in Ireland and Northern Ireland.

Dozens of spectacular links line the shores of the Emerald Isle. Their premier holes dominate the fictitious par-72 layout of 7,363 yards I've created. The gorgeous parkland and jaw-dropping cliff-top holes are hardly filler, either. I can personally vouch for every single choice, having played them all. Only one hole per course was considered.

This "best of" list is certainly up for debate. Which of your favorite holes were left off? Which ones should be replaced? There's no arguing this simple fact, however: Playing this epic routing would be a round for the ages.

What a way to start any round: An elevated tee near the Atlantic Ocean with vistas of monstrous dunes in all directions. This delicious opener drops to a fairway that doglegs right into some of the wildest dune terrain in links golf.

When Irish golf-writer-turned-architect Pat Ruddy discarded the old par 3 during a complete redesign in 2000, he created a unique, new experience overlooking a beach along Ballymastocker Bay. A heroic drive from an elevated tee must fly a river to a diagonal fairway pinched by mounding on the right. The approach shot challenges the same river to reach an inverted saucer of a green protected by traps and a massive rock formation.

The par-5 11th hole might actually be a better hole strategically, but the "Mass Hole" is of major historical significance. In the 18th century, locals held secret church services in the secluded valley hidden by dunes. Mass was punishable by death in those days. The original design of the hole called for a green in the valley. When workmen refused to alter the sacred site, the large green was constructed on the hill beyond.

This double dogleg generated drama during the 2006 Ryder Cup won by the Europeans. The tee shot over three fairway bunkers on the right side of the first dogleg sets up the decisive moment: Do you take on the River Liffey to reach a narrow green or layup to the skinny fairway on the right?

The fourth hole, the famous "Klondyke" par 5, and the stunning sixth hole that leads to the Atlantic Ocean could just as easily be strong candidates. I favor the one-of-a-kind "Dell" hole, a blind par 3 untouched since Old Tom Morris designed it in the 1890s. A white aiming rock signals the line to the flag on a long shallow green hidden between two 30-foot-high sand dunes. It's charming and maddening all at once.

Ruddy blasted through rock to create this daunting dogleg right that's a maze of water and trees. The stream that meanders along the right side of the fairway flows into a pond protecting the green. The setting is scenic, fitting since Wicklow is the "Garden of Ireland" and Druid's Glen the "Augusta of Europe."

Ruddy strikes again by demanding the ultimate test for any golfer, back-to-back shots struck straight and pure. A marsh filled with reeds to the left of the fairway intimidates many players to bail out right, resulting in a rinsing in a burn on that side. The views of Brittas Bay and sand dunes as far as the eye can see heal wounds from a bad score.

Fear is the first emotion experienced on the tee of "Calamity Corner," an uphill par 3 over a yawning chasm within the dunes. I remember aiming so far left of the green that even my weak fade missed the green safely on that side. Bogeys are forgivable, and frankly, expected.

One of the last designs by Robert Trent Jones Sr. finishes with a flourish, showcasing the River Maigue and the stately castle-like manor. The river runs up the left side the entire length of the hole. The green, tucked on the riverbank opposite the fairway, is reachable only by an ornate foot bridge. The Neo-Gothic mansion, which took nearly 30 years to build in the 1800s, and a mammoth tree, the oldest Cedar of Lebanon in Europe, frames the backdrop. Try not to get wet like Richard Finch, the 2008 Irish Open champion who fell in the river while hitting his approach shot during the final round.

In Photos: View the 18 best holes in Ireland

A rousing "Eureka" moment introduces a spectacular back nine. When golfers crest the ridge in the fairway they've just driven their tee shot over, a postcard worthy view of Sheephaven Bay is revealed with Muckish Mountain as a backdrop. The task of hitting a small green from a downhill lie seems secondary to the visual glory.

No bunkers are necessary when the fairway snakes through a beachfront dune corridor as awesome as this. Awkward lies make the approach through a tiny chute in the dunes at the mouth of the green even more difficult.

The name "Shipwreck" is apropos. Many ships ran aground on the beach behind the green, including a vessel from the Spanish Armada whose crew was hanged in 1588. Good rounds crash and perish here as well. The wind off the water can be in your face or worse yet, right to left, pushing tee shots into heavy dune cover. The three bunkers are best avoided.

A hole with sea caves and 300-foot cliffs along the Atlantic Ocean? Wowza. Words can't describe the most dramatic shot on one of the world's most inspiring courses. A surge of adrenaline, coupled with a twinge of self-doubt, usually occurs before the blind drive over the cliffs. The angled fairway shrinks considerably along the journey to an elevated green.

Our round stays on the cliffs by climbing the rocky coastline of the Irish Sea. Golfers tee off adjacent to a 13th-century castle wall that has been converted into a clubhouse reputed to be the oldest in the world. A quick hook will get rinsed by the salty seas or for those blessed with the luck of the Irish, their ball just might bounce off the jagged rocks back into play.

The opener introduces the glorious dunes of the old Doonbeg Golf Club. The hole is so pure that architect Martin Hawtree, hired by new resort owner Donald Trump to redesign the course, has left it alone. From an elevated perch, golfers stare down a twisting fairway corridor framed by dunes. The green sits in the shadow of an imposing mountain of tall grass.

The most scenic hole at one of the world's most famous links also happens to be one of its most difficult. It plays along Dublin Bay in view of "Ireland's Eye," a nearby island. Three bunkers swallow misses short. Shots left end up in a deep swale. Weak efforts to the right find the beach.

Two of golf's best links designers, Ireland's Eddie Hackett and England's Donald Steel, worked decades apart to weave this underappreciated par-73 routing through the majestic dunes of northwest Ireland. It's better to hit one into the dunes on the right than the Killala Bay on the left, although neither is ideal. The second shot should favor the right side for the best look at a wide but very shallow elevated green.

Our dream day in Ireland ends on one of the most famous tees in the game. An elevated perch overlooks everything -- the Mountains of Mourne, Dundrum Bay and the spire of the Slieve Donard Resort & Spa in Newcastle. What's missing is the green, hidden by a towering dune 250 yards from the tees. Those who safely reach the fairway -- located 60 feet below the other side of that dune -- should be weary of the two cross bunkers in addition to the three pot bunkers guarding a raised green. They're the final obstacles before our obligatory post-round pint, an Irish tradition unlike any other.