Tame the "Lion" at Tanglewood Golf Course in metro Detroit 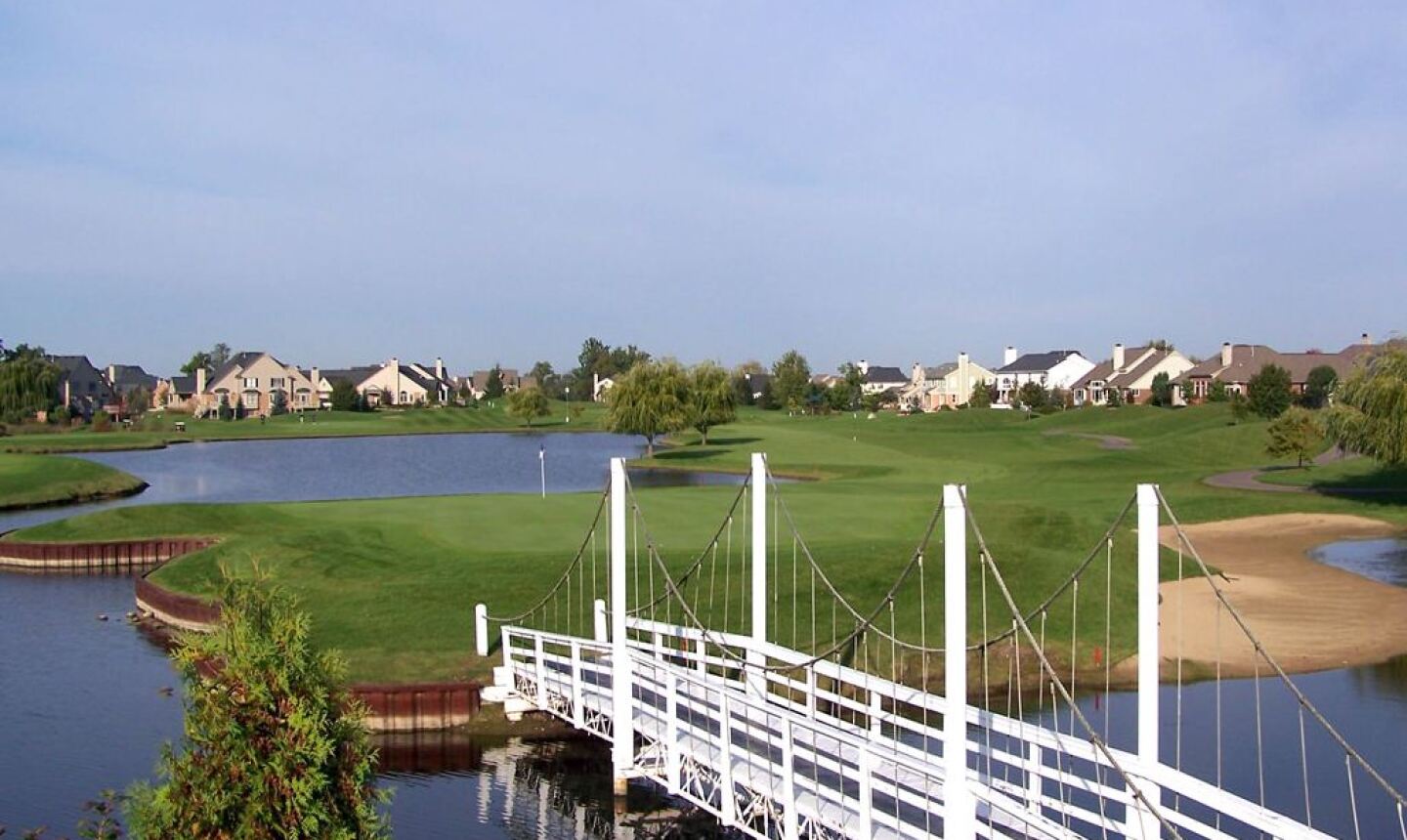 The sixth hole on the West nine at Tanglewood Golf Course features a replica of the Mackinac Bridge. Courtesy of Tanglewood G.C. 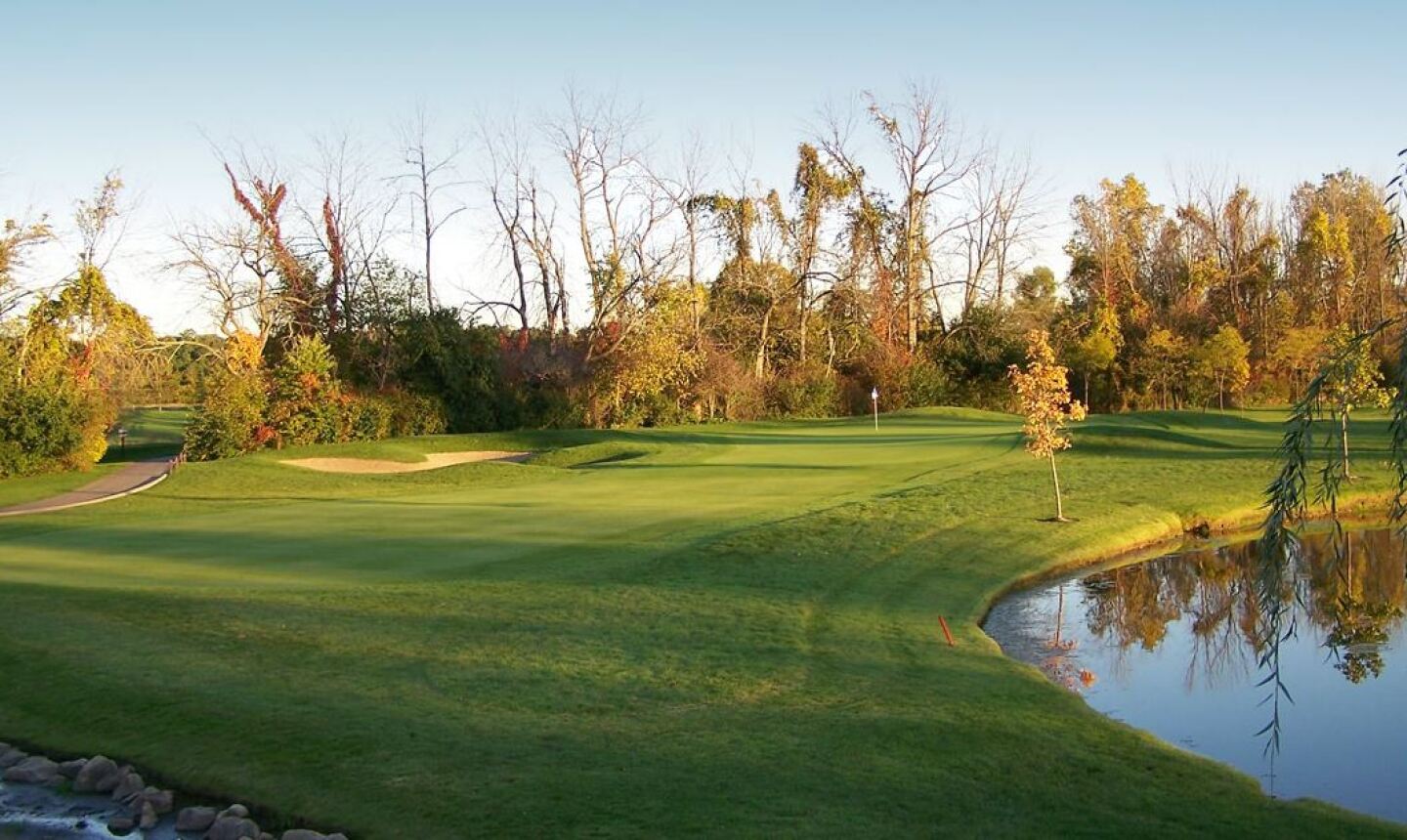 A creek guards the green on the par-5 eighth hole of the West nine at Tanglewood G.C. in South Lyon, Mich. Jason Scott Deegan/Golf Advisor

When Bill Newcomb opened Tanglewood's North and South nines in 1991, Detroit was still a country club town. There were only a few, if any, public courses offering that "country club for a day" experience to public golfers. Many of the region's best public courses -- The Orchards Golf Club in Washington, Shepherd's Hollow in Clarkston, The Majestic at Lake Walden -- hadn't been developed yet.

The Lion at Tanglewood set the building boom of the mid 1990s in motion.

The 27-hole Tanglewood -- the West nine was added in 1995 -- remains a favorite to this day. The houses of the surrounding upscale subdivision encroach play a couple of times, but for the most part, it's a clean routing without any gimmicky holes.

"It is a fun course," said Joel Smith of Novi after playing the North and West nines. "It is a fair course. You can score. It has challenge, but it's a course for all levels. It is in good shape, and for a good price."

Head Professional Brad Stedry finds pleasure in playing any of the three nines for various reasons. Water comes into play on 15 holes. He likes Tanglewood's South-West combination best but says the sixth on the North nine -- a dangerous par 3 over water -- is the best hole.

"That green, without being tricky or stupid, it is a monster," Stedry said.

His favorite nine is the South, where water dictates the plan of attack on five holes.

"It is the most challenging," he said. "You need to hit more shots. There are longer par 4s and the par 5s are risk-reward."

A brief romp in the woods gives the West nine some flavor at No. 3 and No. 4, two interesting par 4s. The signature moment comes at No. 6, a short par 4 with water up the right side. The bridge behind the green is a miniature replica of the Mackinac Bridge. Unbeknownst to players, the entire green complex is shaped like Michigan's glove-shaped Lower Peninsula. It's a subtle tribute to one of Michigan's landmarks.

If your ball lands near Monroe with a flag located near Harbor Springs, you know you're in trouble. Get ready for a long, wild ride.

Tanglewood doesn't have that wow hole that separates the area's cream of the crop from the competition, but you'll never a bad experience playing there. It's a sure a thing you'll enjoy the course.

Kira K. Dixon
Lifestyle Correspondent
Now Reading
Tame the "Lion" at Tanglewood Golf Course in metro Detroit
New Cookie Policy
WE AND OUR PARTNERS USE COOKIES ON THIS SITE TO IMPROVE OUR SERVICE, PERFORM ANALYTICS, PERSONALIZE ADVERTISING, MEASURE ADVERTISING PERFORMANCE, AND REMEMBER WEBSITE PREFERENCES. BY USING THE SITE, YOU CONSENT TO THESE COOKIES. FOR MORE INFORMATION ON COOKIES INCLUDING HOW TO MANAGE YOUR CONSENT VISIT OUR COOKIE POLICY.
CONTINUE
Search Near Me