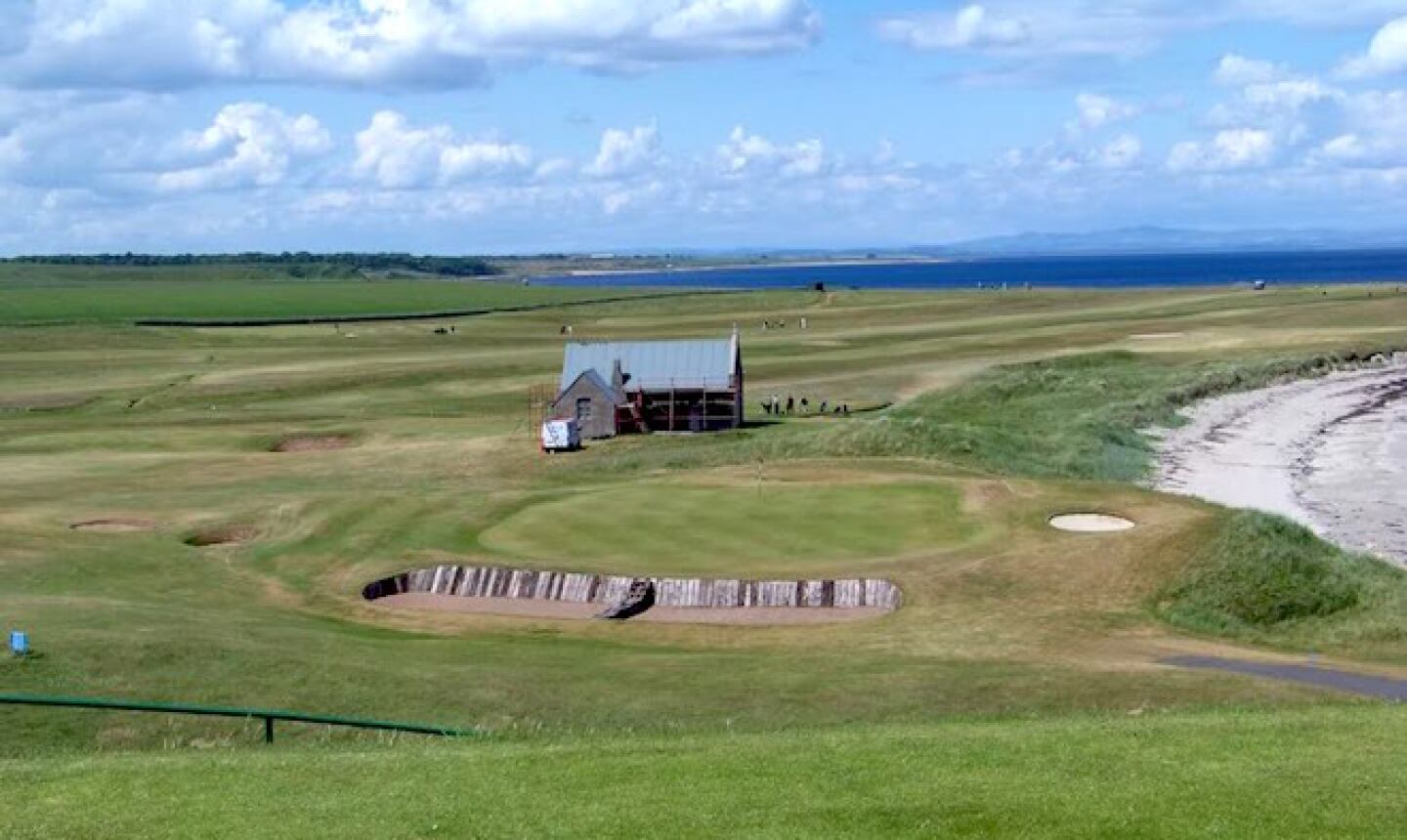 With views like this (the par-3 14th), who cares that Crail's Balcomie Links is a par-69 course? What more could you need?

Did you hear about the PGA Tour playing a par-69 golf course this past weekend?

Tournament officials were forced to shorten the par-4, 14th hole of the par-70 TPC Four Seasons Las Colinas to a 100-yard par-3 due to the rains that have assaulted Texas for weeks now.

Courses with a par lower than 70 often get a bad reputation among golfers. They're generally dismissed as "short" golf courses - too easy or boring to be worth playing.

This could not be more wrong, in my opinion.

The "standard" par of 72 is a relatively new invention in golf, birthed by the American-driven obsession with the notion of a "championship course," despite that 99% of all golfers will never play well enough to play national- or world-scale championship golf.

There are many wonderful golf courses that adhere to the standardized 4/10/4 par-3/par-4/par-5 configuration. But there are just as many - if not more - great courses that are less formulaic.

Some even weigh in at a par of less than 70. But you'd best not underestimate these apparent flyweights of the golf world. They tend to punch well above their weight with long par threes and fours that make them play much longer than their scorecards seem to indicate.

Perhaps the most famous of these courses in the private realm is the par-69 Wannamoisett Country Club outside of Providence. It hosts the Northeast Amateur every year, a tournament of only slightly lower prestige than the likes of the U.S. Amateur. Past Northeast Amateur Champions include Ben Crenshaw, Hal Sutton, David Duval, Luke Donald (twice) and Dustin Johnson.

Likewise, there are a number of public courses of par-69 or less that you can and should play. Most of them are in the British Isles and are more than a century old. Here are our nominations:

Cape Arundel Golf Club - Kennebunkport, Maine
This semi-private club, which dates to 1896, is both a par-69 course and measures less than 6,000 yards from the tips. But it's been compelling enough to host rounds by presidents such as Nixon, both Bushes and Clinton over the years, and it's worth your visit, too. It was designed by Walter Travis, whose designs are some of the most old-school found in the United States.

The Berkshires in western Massachusetts is a terrific area to visit for leaf-peepers, as well as fans of classic golf course architecture. The Wayne Stiles/John Van Kleek course opened in 1926. At a par of 69 and 5,991 yards from the tips, it is undersized but long on character. In spite of the diminutive course, Cranwell's golf practice facilities are extensive - perfect for an autumn game-honing retreat. For those who want a "bigger ballpark," the superb Taconic Golf Club is a scenic 30-mile drive north.

Rye Golf Club - Camber, England
With only one par five and five par threes, Rye is a par-68, but at over 6,400 yards from the medal tees it is anything but short and easy. The links is one of England's great courses, hosting the prestigious President's Putter match between the Oxford and Cambridge golf societies each year and having held Open Championship qualifying in recent years as well. It is a "private" club but similarly to the likes of Muirfield in Scotland, it welcomes visitors on a limited basis.

Royal St. David's Golf Club - Harlech, Wales
If you do some word association with an avid golf traveler and mention Wales, you are likely to hear "Royal Porthcawl" or "Celtic Manor" in reply. Royal St. David's is therefore overlooked, despite being ranked by Golf Monthly as the 44th best course in the UK and Ireland. The par-69 course has been stretched past 6,600 yards in recent years, making it play like a 7,200-yard par-72 course.

Crail was first founded in 1786 and proudly trumpets its status as the seventh-oldest club in the world. The par-69, 5,861-yard Balcomie Links is the shorter and older of Crail's two courses, but offers constant views of the North Sea making for an unforgettable experience. Its much younger sister, the Gil Hanse-designed Craighead course, is also worth a play. Should you fall in love with the club when you visit (many do), overseas club membership costs less than £500.

Palm Beach Par 3 - West Palm Beach, Florida
We've mentioned this darling little layout before, and at a par of 54, it is more than worthy of inclusion on this list. Any golf-oriented visit to the Palm Beaches would be ill-spent without a round by the ocean at this course, which will provide a more complete test of your iron game than many so-called "championship" layouts.

What are some of the best par-69-and-under golf courses you've played, both in your travels and close to home? Let us know in the comments!

Corballis, outide of Dublin.
I agree with Ned. Corballis is a wonderful short seaside golf course. Hard when the wind and light rain is blowing but a glorious experience. It's an easy walking course and very inexpensive with a friendly pro shop. Hugh dunes on some holes!

Back again. I echo Corbalys review. Near Baltray aka Counth Louth(par 73) is a shortish course called Bettystown. Good little tract....but it was 14 very good holes until the town added 4holes which are little more than 4 flags planted in a big field.

Muirfield in Sydney, Australia. Includes a 200m par 3 and 2 par 4's in excess of 410m. Beautiful undulating layout. Tests all clubs in the bag. Great greens. Members course but open to the public. Well worth a visit if you are in town.

I also like Seven Bridges at Sunrise in Tamarac Florida. Challenging and beautifully maintained. We vary the Tees from short to long to make it more interesting. It is the little sister course to Plantation Preserve in Plantation Florida which is a Wonderfully plush and a good golf test of golf but that one is not a short course. Seven Bridges is terrific..

Too bad The City of San Francisco ignores Lincoln Park. It is one of the most beautiful short courses in America. Neglected as it is it is worth playing
just to experience the final three wholes.16 par three 237 yards down hill.
One of the most difficult par threes I have ever played. 17 par three 250
yards do I need to say more,oh yes this whole has the most spectacular view
in all of golf.18 long par four, narrow fairway with a blind second shot to the green.

Very glad to see Royal St Davids being mentioned with so many compliments. Without a doubt this is the finest and most enjoyable course I have ever played in the UK.(I havn't played them all unfortunately) If I had to spend the rest of my playing days on just one course it would be here. (I live in Watford so a "day out" is not on the cards)It wasn't a special day weather wise, breezy, a little sunshine/ cloudy but not cold. On my own, used the practice range, got in a Buggie and off I went. 18 holes of sheer bliss. Managed Par on a few holes, 1 or 2 over on others, scraped a Birdie, even lost a couple of balls but at no time did I feel out-of-place or over powered. The most enjoyable golf day I have ever had in the UK.

Great call Matt on Stonehaven. Only 4800 yards but guarantee one of the most memorable rounds you will ever play. Also need to include the 12 hole Shiskine on the Isle of Arran. Magic!

For readers of "Golf in the kingdom", with shivas irons et al, Crail Balcomie is reputed to be the inspiration for Burning Bush golf club.
Must play course, super experience.