The top-5 British Open courses you should play 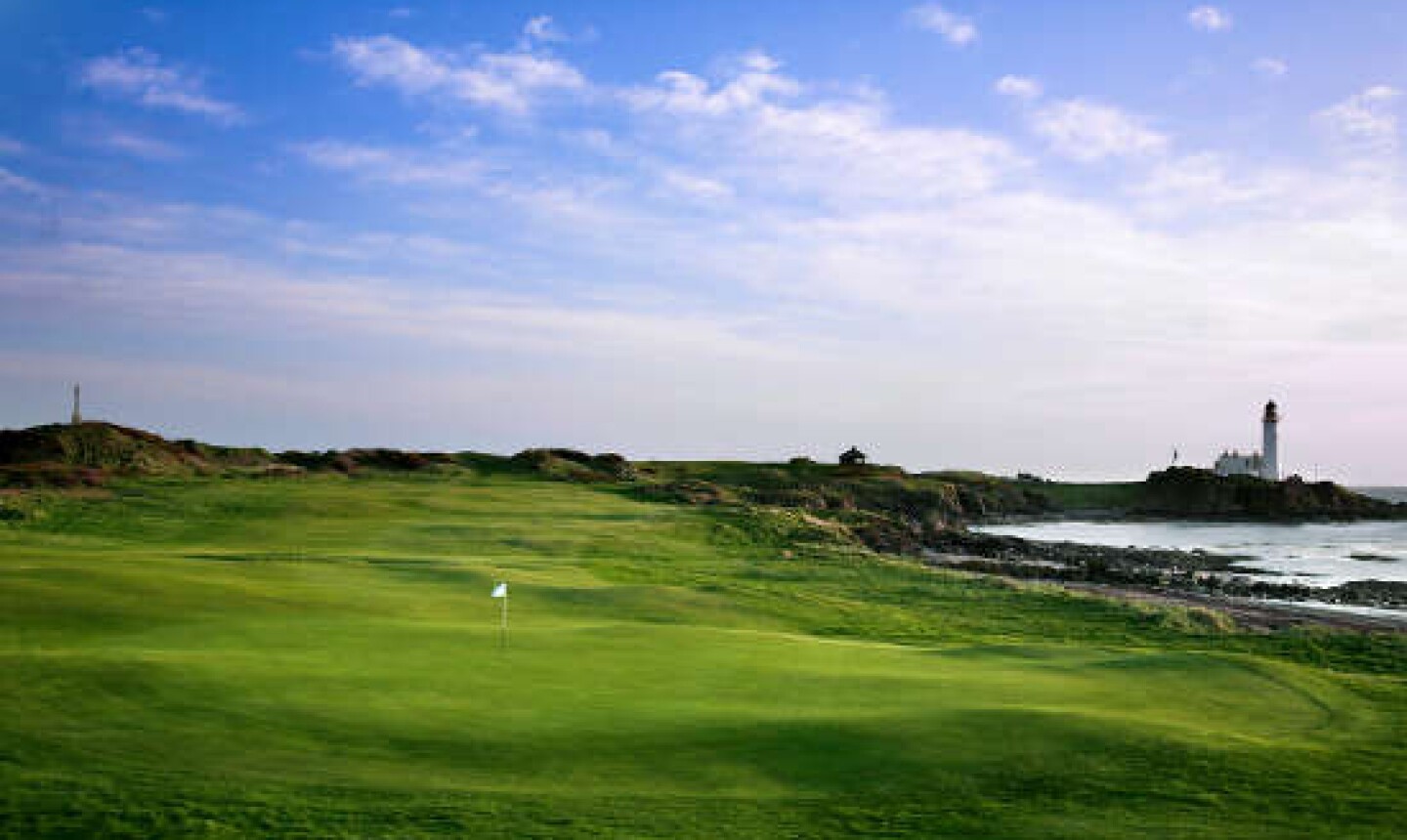 Given the liberal, non-member playing policies at private clubs in the UK, you could theoretically play most, if not all, of the courses that host (or have hosted) the British Open.

But with such a grand golf smorgasbord, the question is: where should you begin?

Here is our list of the five British Open sites we think are the best to play and why.

The Links: The Old Course at St. Andrews (Scotland)
The Logic: C'mon, it's The Home of Golf! And it does not disappoint. Perhaps no other course in the world can match the Old Course's historic and iconic status (Swilcan Bridge, the Road Hole, Hell Bunker). And given that every five years or so it hosts the British Open, you're guaranteed to play this venerable venue not too far before or after it hosts the major championship. I will say this: some first-time visitors don't "get it," so read up on the course's significance and subtleties before you make this pilgrimage.

The Links: Muirfield Golf Course (Scotland)
The Logic: Few people realize that Muirfield, whose "Honourable Company of Edinburgh Golfers" drew up the first Rules of Golf, is one of the 10 best golf courses in the world. Even fewer know that it offers one of the best golf experiences.  After your morning round, you put on your jacket (the one men are required to arrive in), sit at the club's long, community tables (often alongside members), and gorge yourself on an all-world lunch that begins with soups, moves to meats, then ends with a cornucopia of sweets and cheeses. After that, you head back out to the course for an afternoon round of alternate shot. By the way, if you ever wondered which British Open course most appeals to tour pros, this is it. Not dramatic or scenic, Muirfield is celebrated for its, "beautiful honesty as a test of golf" as Ben Crenshaw put it.

The Links: Dunluce Links at Royal Portrush Golf Club (Northern Ireland)
The Logic: Perennially ranked among the 15 best golf courses in the world, Royal Portrush also holds the distinction of being the only course outside of Scotland and England to host the British Open (1951) in the event's 150-year history. And here's another interesting fact: in 2005, tour phenom Rory McIlroy set the course record of 61...at age 16.

The Links: Ailsa Course at Turnberry Resort (Scotland)
The Logic: Another fixture among the world-top-10, Turnberry's Ailsa Course has hosted the British Open four times (most recently in 2009). Often called the "Pebble Beach of Scotland," the front nine contains a stretch of holes tracing the outline of the sea atop soaring cliffs. Any of these holes could easily be the signature hole at other courses. The course is surprisingly playable, too, even for high handicappers, although a windy back nine can wreck your card. Regardless, the course is so good, so beautiful and so rich in history that any round will produce fond, lifelong memories. Being part of a resort does have its pros and cons. On one hand, this is probably the easiest tee time to secure among the five listed. On the other, you don't get the ultra-clubby experience like you do at say, Muirfield.

The Links: Royal Birkdale (England)
The Logic: My colleagues at Golf Odyssey say this is their favorite of England's British Open courses, mainly because, "there is not a weak or indifferent hole in the entire layout." Top players like it, too, because, "quirkiness is absent here." The course has certainly had plenty of experience hosting them; since 1946, Royal Birkdale has hosted 44 championships, including the British Open (nine times), the British Amateur (three times), the Curtis Cup, the Walker Cup, and the Ryder Cup (twice). Another great thing about Birkdale is that it shares borders with two other worthy venues: Southport & Ainsdale Golf Club and Hillside Golf Club.

Craig Better
Craig Better is one of the founding editors of Golf Vacation Insider. In addition to traveling to 15 foreign countries, he has twice traveled across America to play golf courses in all 50 United States. Prior to joining Golf Vacation Insider, Craig was a freelance writer who contributed to GOLF Magazine, Travel + Leisure Golf, Maxim Magazine, USAToday.com, and co-authored Zagat Survey’s book, America’s Top Golf Courses.
24 Comments

Carnoustie is no1. The toughest, longest course on the Open rota. It may not be as picturesque as the others but when labelled "the most challenging links in the world" you should sit up and take notice. Els described it as the best bunkered course in the world? Wind or no wind, it's a monster but so rewarding to play. And remember, golf was played on the Angus coastline long before St Andrews!

Carnoustie championship is as hard as it gets when the wind blows. A rugged big links highly regarded as a tough but fair test of golf, and what about the closing 3 holes? Magnificent!

Played Royal Troon, Carnoustie, Muirfield and Birkdale this past October and I can honestly say I have no idea how to rank these 4 courses as I said "this was the best day of my life" after completing each round. But for the sake of discussion, I'll give it a shot.

1. Muirfield (Can't put my finger on it, but it's life changing (golf wise)).

2. Royal Troon (My favorite of the 3 courses, from just golf stand point)

3. Carnoustie (I could have easily ranked this course #1, it was in the best shape of all, and the rawness of it - weather/layout/dark nasty part of Scotland, were incredibly awesome in a tough way to explain).

4. Birkdale (I'm sorry, but it doesn't compare to the 3 courses above, almost has a claustrophobic feel as you are sunk in with the way its laid out). Very nice course, but I would stay north.

I had such an incredible time over there that I'm going to try and make it an annual pilgrimage. The problem is that when I go back, I want to play the same courses, but I know that's probably not the best idea.

If I was only recommending one course I would go with Troon, Muirfield is just so expensive if you do it the right way, and Carnoustie is a bear to get to.

So, what does it cost to play these BO courses?

Got to agree with Barry D. Liverpool is the perfect base to play 3 British Open courses, Royal Liverpool (Hoylake) Royal Birkdale and Royal Lytham. The apre-golf is also 5* with Liverpools famous night life. But them maybe I'm biased as I arrange highly personalised golf tours to all British Open courses. Why not combine these great courses with the Greatest Horserace of them all ... The Grand National. (14th April 2012)
I am currently updating my website but in the meantime should anybody wish to contact me, please do so on the email address above.

Again, it was tough to leave it off the list, but had to cut it off somewhere!

Dear Craig,
those are all great courses but how can you leave out CARNOUSTIE, which all the pros say is the toughest of the curren Open Rota and has a lot of history, including Ben Hogan's 1953 win an Jean Van de Velde's more recent Meltdown.
it also has the 3 tougheat closing holes on the Rota.
As a bonus, it is less than an hour from St Andrews.
Geo

Turnberry always gets the write up here in the South West of Scotland but there are many other great courses here. Prestwick is were the Open begun its not that far down the road and then you have Royal Troon, Darley and Dundonald links these are all wonderful courses.

Just returned from a fantastic golf vacation in Scotland with 11 other guys. We played Prestwick and while the course wasn't a top five golf course, the experience was. Also, Prestwick offers a unique "Day of Golf at Prestwick" - two ball in the morning with the members, lunch with the members (coat and tie required), and a four ball in the afternoon with your buddies. The first Open Course with the second most Open Tournaments, and the oldest unchanged hole in Open Championship history (the 17th) make the history perhaps second only to St. Andrews.

I had the priviledge to play Carnoustie and the Old Course in May 2011. While I haven't played any of the other BO courses, based on our experience at Carnoustie it has to be in the top 5. The combination of history, difficulty, conditioning and pure, old school golf atmosphere is hard to beat; it reminded me a lot of Oakmont here in the U.S. I agree that the Old Course should be included; there's nothing like it, especially when combined with the town of St. Andrews.

Kira K. Dixon
Lifestyle Correspondent
Now Reading
The top-5 British Open courses you should play
New Cookie Policy
WE AND OUR PARTNERS USE COOKIES ON THIS SITE TO IMPROVE OUR SERVICE, PERFORM ANALYTICS, PERSONALIZE ADVERTISING, MEASURE ADVERTISING PERFORMANCE, AND REMEMBER WEBSITE PREFERENCES. BY USING THE SITE, YOU CONSENT TO THESE COOKIES. FOR MORE INFORMATION ON COOKIES INCLUDING HOW TO MANAGE YOUR CONSENT VISIT OUR COOKIE POLICY.
CONTINUE
Search Near Me