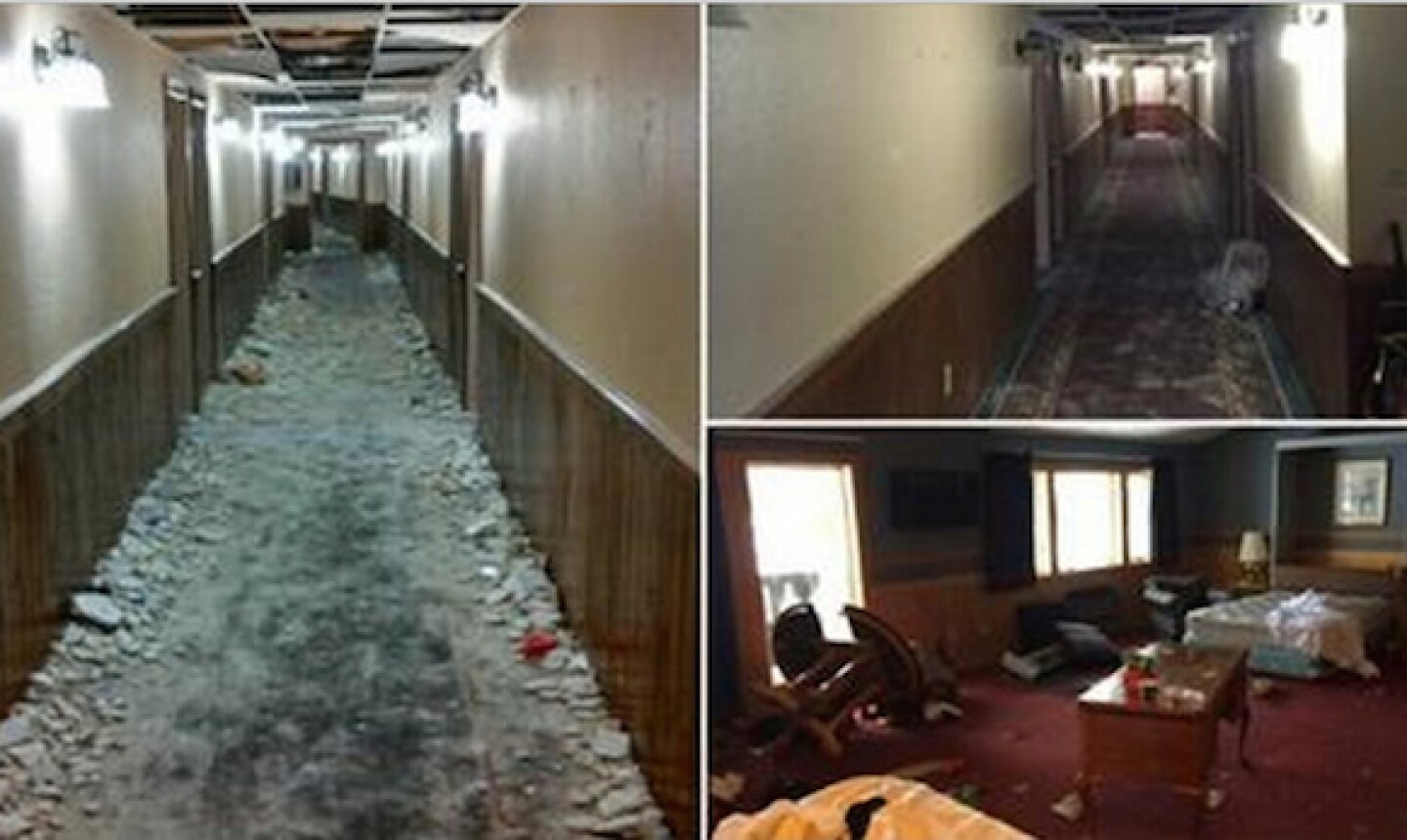 How might these seemingly post-apocalyptic photos affect your next golf vacation? (Via UnofficialNetworks.com)

We hate to be the bearers of bad news, but we felt you had to know:

If you're planning a spring or summer golf vacation to either of two particular Michigan golf resorts this year, make sure you specifically request that you not be placed in any of the rooms with urine-stained carpets.

University of Michigan's chapter of Sigma Alpha Mu fraternity held an weekend party along with the Sigma Delta Tau sorority at Treetops Resort and did their best Animal House impression, abusing 53 resort rooms and causing more than $100,000 in damage. (UPDATE 3/2/15: A new report has upped the estimated damage to $430,000)

The vandalism was so significant that an entire wing of the resort is still closed for renovations more three weeks later; the Otsego County Board of Commissioners has voted unanimously to demand that the fraternity be charged in the matter.

Other Michigan Greeks caused over $25,000 in damage at Boyne Highlands resort over the weekend.

Treetops and Boyne Highlands are year-round resorts, serving skiers throughout the cold winters until their golf courses open up in the spring.

With lots of time between now and golf season, our guess is that both facilities will be able to fix the damage.

In fact, this may prove a blessing in disguise. On their most recent visit, our friends at Golf Odyssey were nonplussed by the accommodations at the resort. If these rooms are fully renovated in short order, they may just become the best lodgings at Treetops.

As to why Michigan students would act this way, perhaps it has something to do with the recent poor performance of their storied football program?

Rival Ohio State students (seen below) were able to blow off their steam following the Buckeye victory over Oregon in the first ever College Football Championship game about a month ago.

As if there isn't enough pressure on new Michigan football coach (and avid golfer) Jim Harbaugh....

If this is an example of young American youth coming through their school years we must really wonder what lies ahead for the mighty USA into the future !!!!

Either they are lunatics or they have no consideration for other peoples' property.

Wonder if they do the same thing in their parents homes ????

NowYouKnow: I agree with your words.They must be punished.It´s unbelievable!!!What are they? Animals or human beings?

The movie Animal House ruined the fraternity system. Criminal charges should have been filed followed by civil lawsuits against the chapter officers and directors. This has to stop somewhere.

That young people in college and supposedly joining fraternities as a statement of their direction in life, could possibly sink to the baseness of performing like this is a disgrace to the Frat house and the university or college. So sad that these same persons cannot clean up the mess and stay thru the Reno process doing jobs that do not require any building talent, but may serve to make them realize the resources and cost ot repairing and replacing the damage they did.