Hueston Woods Golf Course sprawls across over 260 acres of lush, rolling terrain. It plays to a beastly length of just over 7,000 yards from the back tees. Jack Kidwell, a designer who had a hand in many of Ohio's finest courses, created the course. It borders hundreds of acres of beech and maple forests that are accented with colorful wildflowers and provide a home to the area's wildlife. Kidwell utilized this rich and beautiful landscape to mold a scenic and challenging design. The layout features large, wildly undulating greens bordered by over 30 strategically placed bunkers. Four ponds also come into play on several holes and golfers will also have stands of mature trees to contend with. Hueston Woods' signature hole is the par-3 16th. This 175-yard hole requires a demanding carry over water.

The 19th Hole is Great For:
Drinks 11
Course Challenges Include:
Water Hazards 20
Undulating Greens 17
Bunkers 13
This course/club is great for:
Advanced Golfers 20
Locals 19
Wildlife/ Scenic Views 19
This Course's Location is:
Worth the Drive 26
On a College Campus 11

Nice course in a country setting

Nice course in a tranquil setting. Decent greens, reasonable shape, some good holes. Perfect atmosphere to light up a fatty and be at one with nature.

This course's strength is its greens. Speeds are fast enough for a putt to get away from you if you're lazy, without being terrifying. The green sizes vary from hole to hole in an interesting way, breaks vary from subtle to obvious and will keep you on your toes all round. Most importantly, the roll was true. In some spots there are visible patches in the greens, but the ball rolled nearly as true through those as on the grass; I stopped worrying about them being in my line pretty quickly. I don't think I saw a ball "wobbled" off its line all round; putts were missed because they were mis-read or mis-hit, never because of a bobble on the way to the cup. Overall, they may be the best public greens I've seen all year.

Visually, the course is beautifully set in nature, and every hole feels secluded.

I wish the fairways were as nice as the greens, but they were unfortunately spotty in terms of grass coverage. Lots of bare spots where your ball lies on dirt. This might just be due to being late in the season with a lot of play, but my advice is to play preferred lies here, and not make yourself miserable playing from junky lies in the fairway all day long.

As the title suggests, the course's setup has a lot of hard doglegs, nearly all of which turn right. Lots of people enjoy this type of layout, but it's just not my cup of tea. I found myself savoring every hole that wasn't a dogleg. And what a shame, because many of those holes were fantastic! They just get overwhelmed by the sheer volume of traditional, trees-on-both-sides doglegs.

One nitpick, the scorecard is pretty good at giving the layout of every hole except 17. On 5, there's a lake that you can see visually throughout the hole, but it really shouldn't come into play for anything less than a really bad shot, and they put the picture of the entire lake on the scorecard. On 17, there is water that's very much in play just to the right of the green that you can't see from the fairway, and there is nothing on the scorecard to show it! Just a warning for the first-timer, and hopefully something that makes the next scorecard re-print if someone at Great Ohio Lodges is watching.

Overall, this course is very much worth a try, even a long drive, for the greens, the value, and the setting, and may be worth a return for the golfer who savors dogleg-right hole designs.

I’ll always stop back by this course even after graduation. I think the staff has done a good job investing back into the course to improve conditions and make the greens more challenging. For a while there the course was taking a beating but they were able to restore it. Overall, it’s a nice course tucked away in Hueston Woods and i’ll always have good memories of playing there with college buddies. Looking forward to returning in the future and have the first par 5 still tear me up.

Greens were recently aerated . There were large hole plugs making putting very tough. Outside of required aeration the course was in great shape. Layout is very good with the overall difficulty challenging.

Will certainly look forward to playing here next year.

This was a terrific experience. I love the course layout but the only drawback was that the greens were recently aerated. But you are likely to run into that on any course this time of year.

Was 3 groups behind a 5 some. Saw a ranger 3 times, which is always a good thing. Except this time they didnt break up the 5 some. I'm a Miami Alumni, so I'll always come back and play, just unfortunate this group wasnt split up.

Hueston Woods on a busy Saturday

This is a great course, with the usual exception that the sand bunkers are cement with obvious problems due to water pooling. Other than that, it's a top notch course from my perspective as a lower middle class golfer. The greens are fast and in good shape. The fairway and rough are tended. Most holes have this nasty overgrown "natural area" (with lots of vicious thorns in many places) which makes sense for a course on a state park.

I got the earliest possible tee time for Saturday, which given that I was checking on Thursday, was 12:48 pm. It was a traffic jam all day. What was really kind of a annoying was this guy and his non-playing female companion who refused to join our pairing and jumped us at the turn. I suppose I should have said something but didn't feel it merited causing a scene about it.

Keep it in play.

Always enjoy playing here. Its challenging if you're a wild hitter. Plenty of trees but you're rewarded if you can keep it in play. Course was mostly in great shape and you couldn't beat the price today.

Great Conditions and a Layout That Makes You Think

Drove an hour to play this course for the first time and was thoroughly impressed. Fairways and greens were both in amazing condition and the greens held well and rolled true. This course is mostly composed of doglegs that make you think about tee shot positioning on most every hole. The par threes are also decently challenging as 3/4 are 180 yards+ from the white tees with two of those going over water. Don't let any of this scare you away though, my round here was one of the more enjoyable ones of the year!

Hueston Woods is located within an Ohio State Park.
It is out of the city pollution and surrounded by a huge forest; it is a wonderful getaway from the normal urban area problems.

Course and greens in very good condition ... lots of trees have been cut down in the past 2 years so it looks much different than originally, and plays easier for the same reason. Tee box set up is good for all players.

I would play it more often were it not an hour from me.

Certainly a place to play ....

Course is in great shape, rough is short, fairways pristine. There is only one hole in which you don’t want to grip it and rip it off the tee. The par 3 16th hole is a beauty and as challenging as they come. 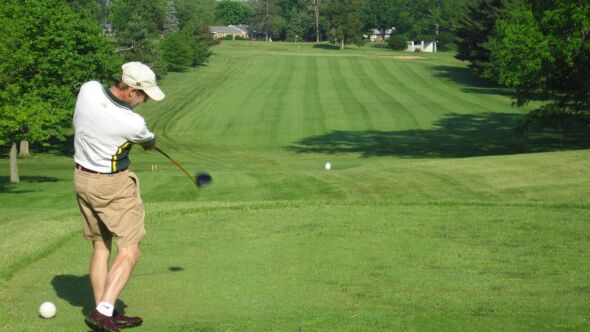 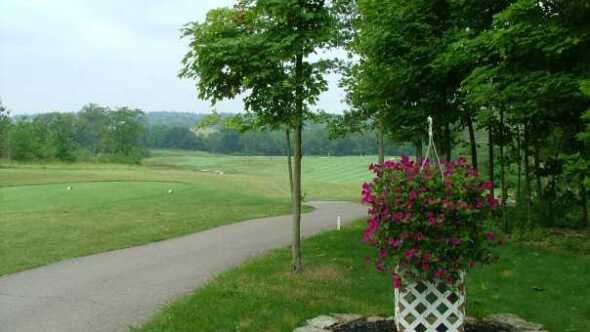 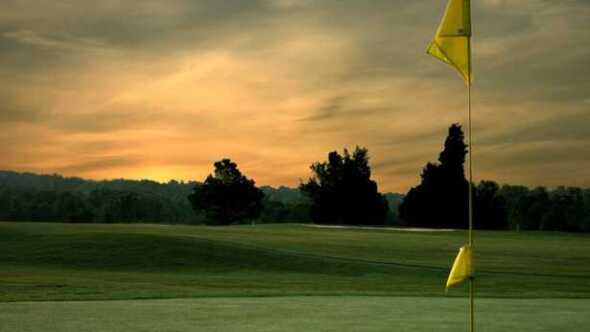 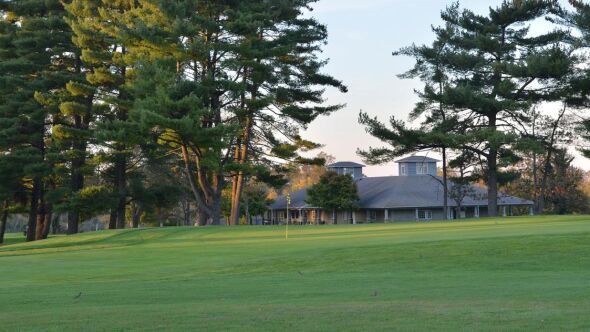 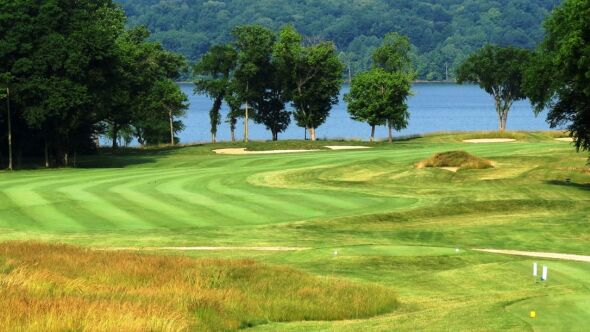 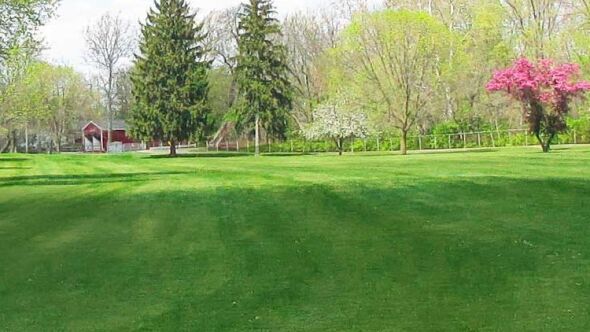 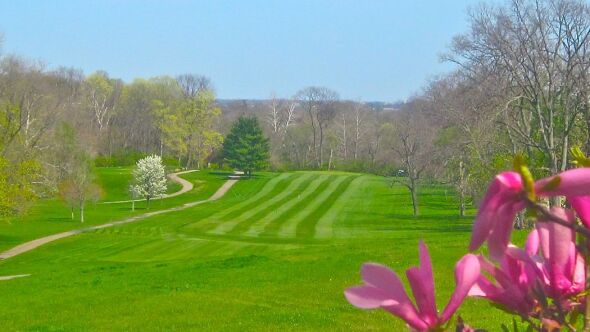 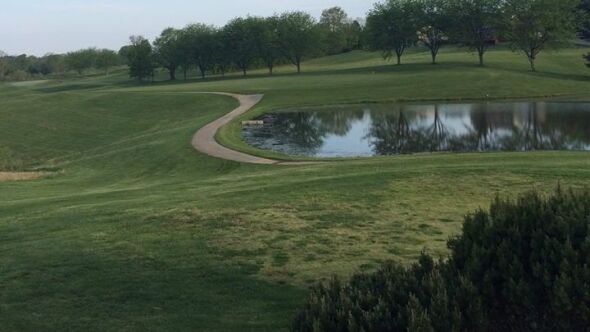 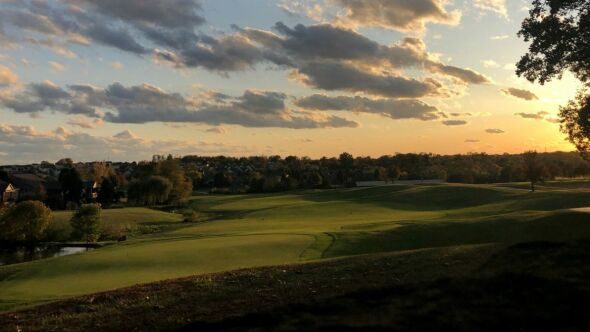 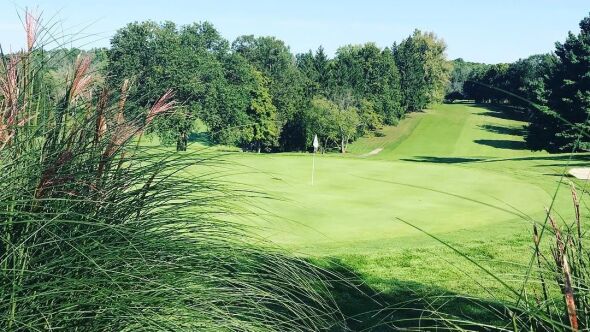 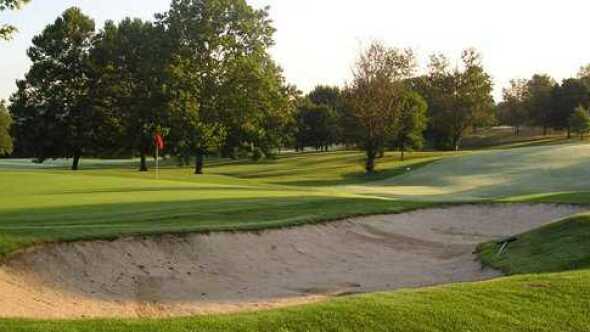 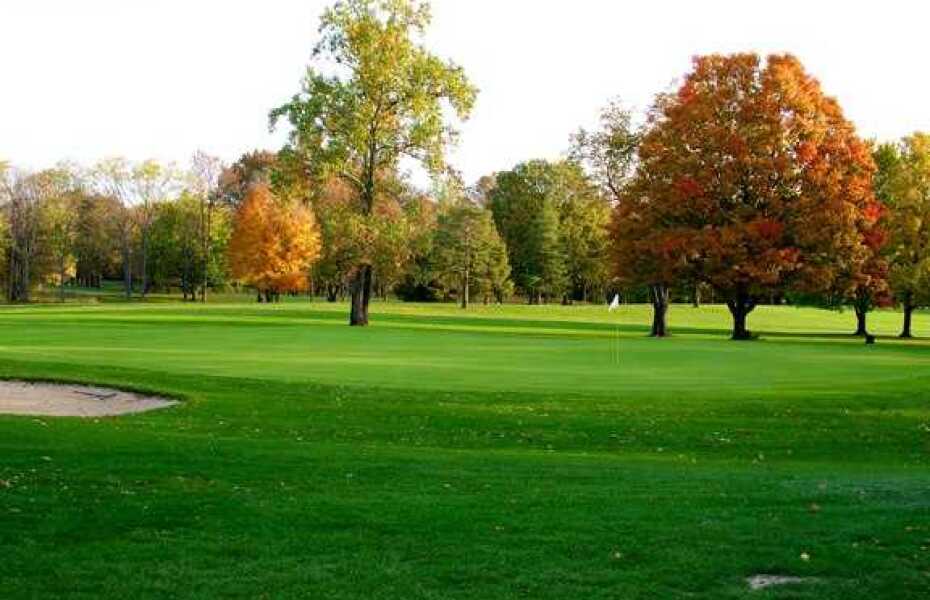 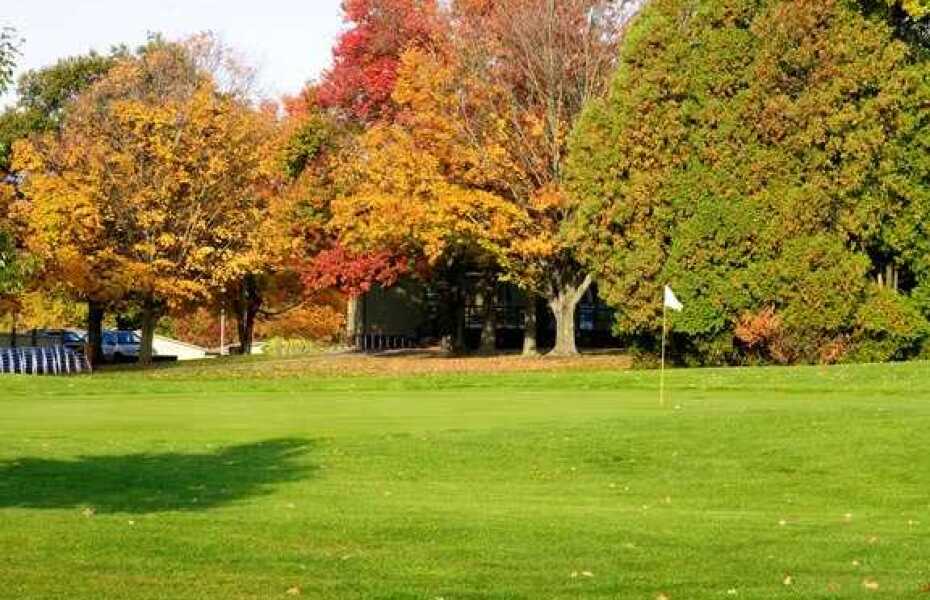 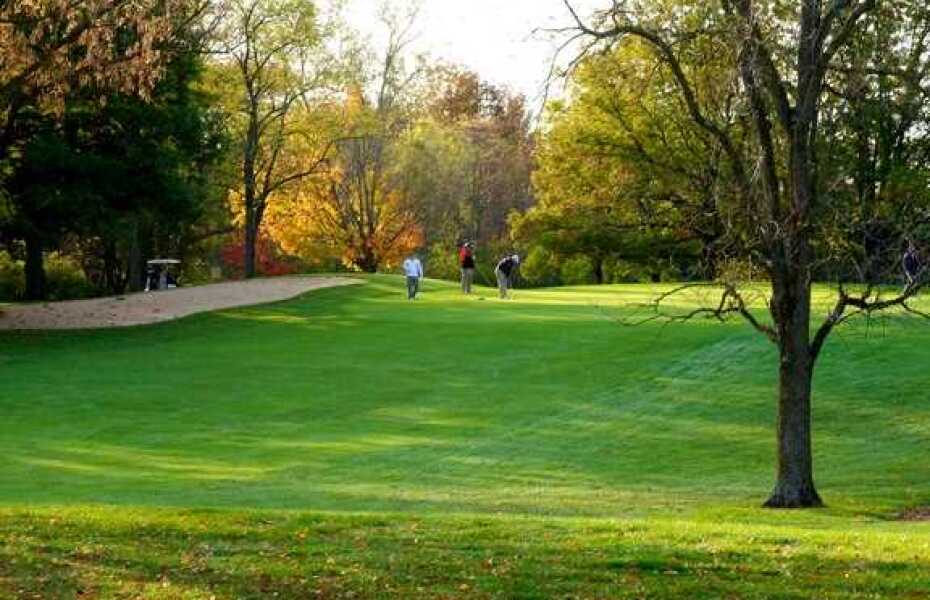 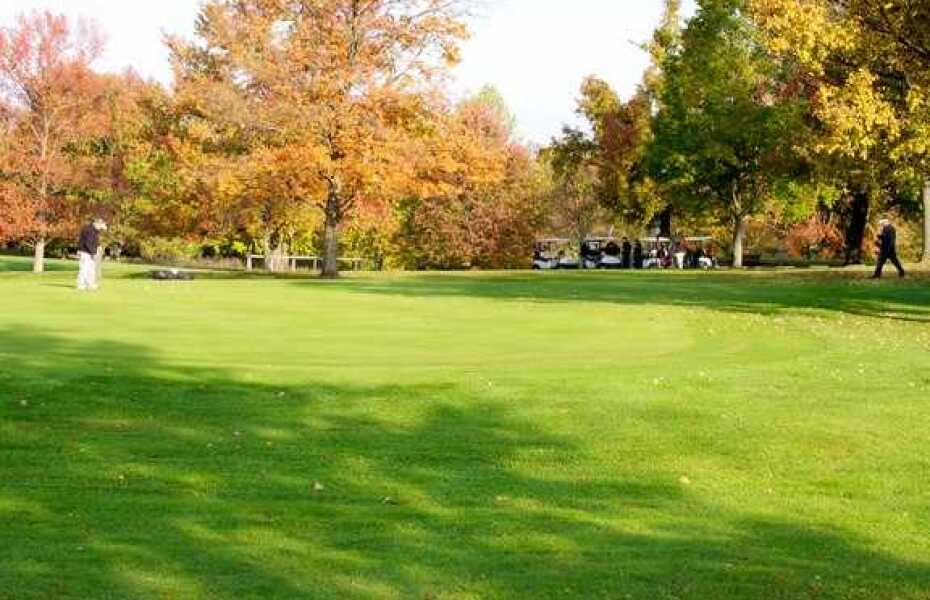