Good course. Greens and fairways are in great shape. Tee boxes and rough are not in great shape but that is the right order when rebuilding.

Give this place some time to rebuild. Course design is excellent. Rough shape on some places on the greens.

My review worth the price ya pay for it.

After looking at this course multiple times on GolfNow and seeing the reviews, I finally decided I’d go and see for myself.

TL/DR- Amazing layout in the process of being rebuilt from being dormant for some years and hit by the tornados. Yes the course needs some time to develop, but being a Chi-Chi Rodriguez designed course, the layout is incredible. All conditions are playable, just inconsistent at times. We’ll worth the price of admission and funds will goto rebuilding this course to it’s insane potential.

I really enjoyed Graywolf. The reviews were off putting, but today I decided I’d find out myself. It sits inside a beautiful neighborhood. There’s no clubhouse, just a shed type setup for now. They just got their last permit to begin building the clubhouse. I was met by name and handed a key to my cart and a once over of the course. Large practice green for putting and chipping. They also just opened their driving range, although I didn’t check that out.

Course conditions: It rained the prior 2 days, so I figured it would be sloppy, but to my surprise, it was really nice. That leads me to believe it’s been insanely dry, and I could see where during those dry/hot stretches we got, it was probably pretty brutal. Tee boxes were cut, fairways ran fast, and putting greens rolled consistent and true.

Tee boxes: Some were great, some were mediocre, and some were super bad. I can see where the inconsistency could bother some people. All were playable, but there were a few that were really rough.

Fairway: Majority of the fairways weren’t too shabby. Definitely some burn out from our dry stretches and it being dormant. There were some cases where I landed on solid dirt in the fairway and a time I had to take a ball out of a tire rut from the mower. Rolled fast, which I was surprised since it’s rained a ton. Some weird kicks off fairway shots at times.

Putting greens: Id says the majority of the putting greens were pretty nice. Unfortunately, What everyone says is true, the divots here are more than anywhere I’ve played this year. Unfortunately, this boils down the everyone maintaining their divots. You will 100% miss some puts your should hav made and have some weird lines. They did roll true and consistent. Reminder: It rained a lot before this, so dry conditions will certainly make em roll wicked fast.

Cart paths are terrible as others have said, just make sure to put covers back on your clubs before ya drive, it’ll rattle your bones at times.

The front 9 is marked, but the back 9 is not. They said the back 9 signs are over and coming in soon. I used a GPS golf app that locates each hole, so I had no problem and the score card will get you around, it’s just tricky at a couple holes. The rest of them flow really clearly.

No ball washes at any holes.

Carts were older but not beaten down. The one I had worked great.

Only true “complaint” I had was whoever was mowing tee boxes. From hole 3 to 7, there was a younger guy specifically cutting just the tee boxes. At every tee box he’d be cutting while I tee’d off, 20 feet away on a big mower, be there at the next hole to tee off, and so on. I finally waited about 20 minutes on hole 8 and he got ahead of me. I caught up to him around hole 15 and waited each hole for him to cut. He also didn’t replace the markers, so it made it tough to find which tee was white at times. In the future, cut the mower and let your players enjoy their round without cutting on the same tee box.

I’ll be back again for sure! I enjoyed it. One of the more enjoyable layouts in the area in my opinion. Really pretty. When they get this course back together in a year or so, it’ll be arguably one of the nicest In the area.

Does it need work? Absolutely. If you like perfect conditions and consistency of a country club, this probably isn’t for you (Right now*)

Are some places around this area cheaper and maintained on GolfNow? Absolutely. I’d love for it to be cheaper so I can play it a few times a week like some of the other courses on here, but they also need the funding to bring it back, so I think a bit of what you have to understand you are paying for is supporting the course for the future.

I look forward to seeing what the owners and employees can do with it over the next few months to close out the season. I’ll be back again and will follow up if things change for better or worse.

I enjoy golf but average 86 and that’s what I shot from the white tees. Staff friendly

course conditions are terrible for the price to play. Greens have ball divits everywhere and the fairways were not in good shape. Would not pay $40 for this course, they need to lower the price.

Great course for the money!

Great layout! Greens are in good condition but traps need some work. Very friendly staff. Pace was great . Would certainly come back.

carol5069
Played On 07/14/2022
Reviews 1
Skill Advanced
Plays Once a week
I Recommend This Course
4.0
Verified Purchaser

Was closed for 4-5 years. Was destroyed by the Memorial Day tornados 3 years ago. They have done a ton of work to bring it back. Still have a way to go. Givr it a couple years and it will be a great course again like the old Moss Creek. We will definately play it again in the shape it is in. Not horribe by any standard..

Two foursomes in front of our twosome were extremely slow. Tee boxes were hard. We left after 9 even though we payed for 18 due to conditions and pace.

Had a great time playing Graywolf! Never had a chance to see it when it was Moss Creek, but I really enjoyed this course. Still a work in progress after the 2019 tornadoes in Dayton, but can’t wait to go back and see how it progresses in years to come!

Drove 80 miles to try this course out. Soon as I pull in, I'm disappointed. Tool shed for a clubhouse. One guy running it. I'm told that they're having golf cart issues. I saw 3 carts out of commission. They have no carts and I have to wait for people to come in. Foursome on the first tee and they're waiting 45 minutes for the second cart to come in. They haven't even started yet! Two groups waiting for their cars in front of me. I got a complimentary small bag of balls to hit on the range while I wait. Went through them. Putted on the practice green. And waited. And waited. No carts. A single came through because he started on the back nine (?!?) and was making the turn. I called GN and cancelled the round. I'm not coming back to this place. Oh BTW, a portolet for the clubhouse isn't a good visual. Chi Chi Rodriguez designed? I played mom and pop courses better than this place.

They are trying to bring this course back from the dead. It's still in the process but definitely can see the effort of the new owner. Dry weather has hurt a bit but the layout is still great. A few more improvements and it's 5 stars. 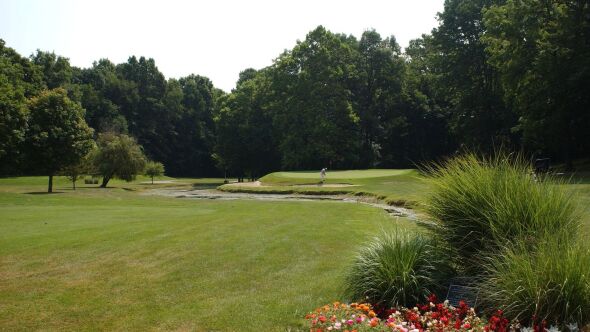 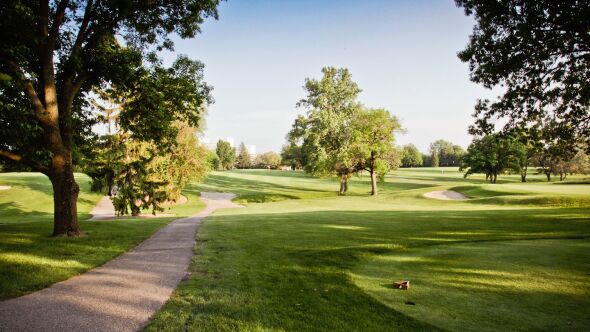 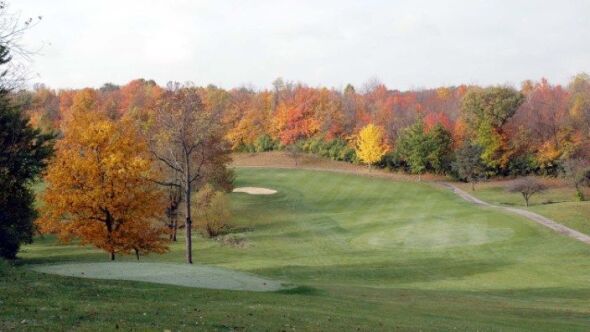 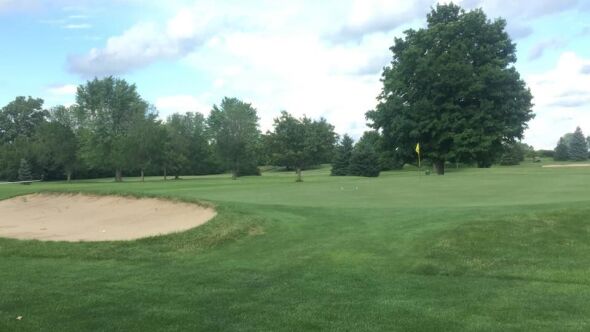 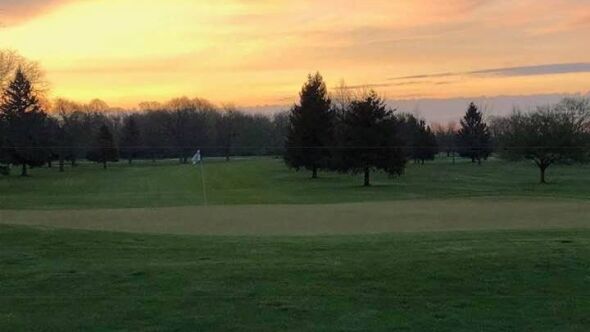 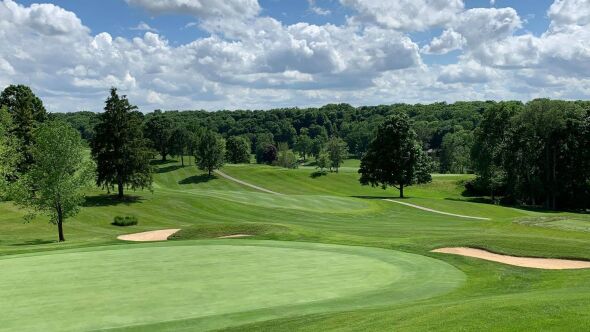 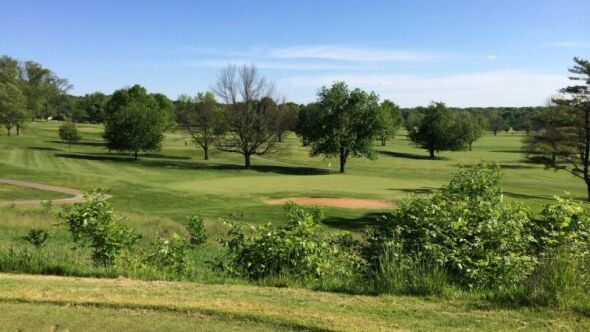 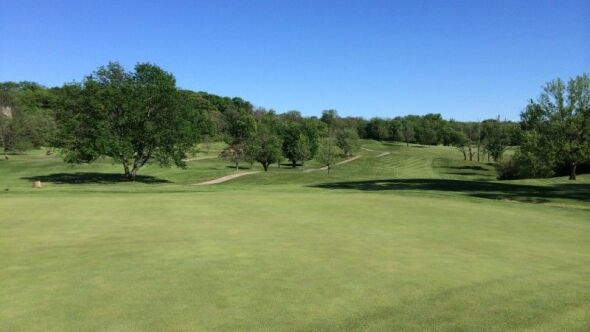 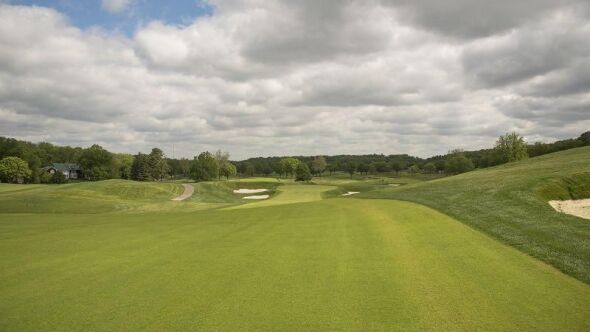 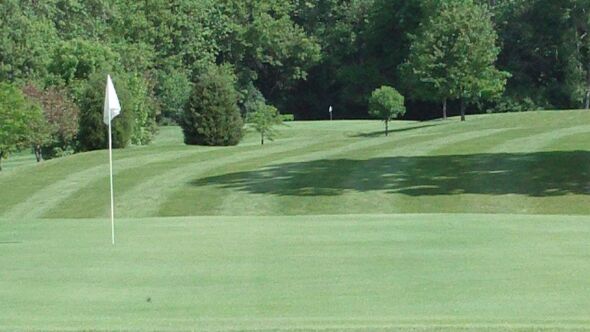 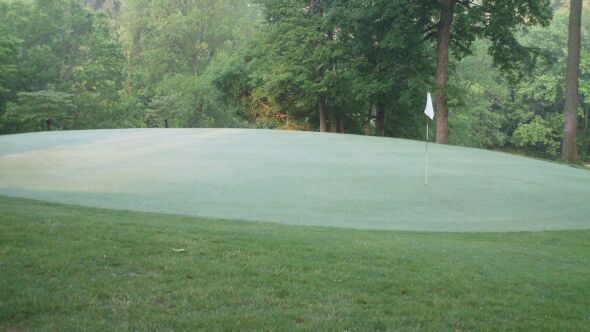 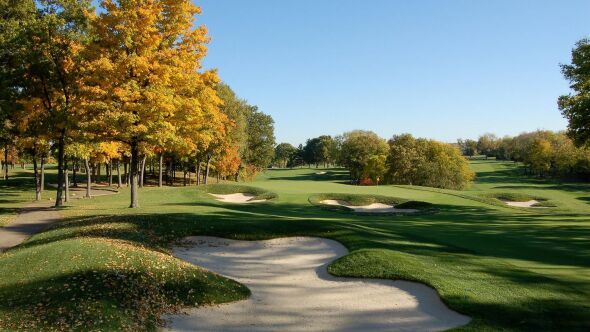 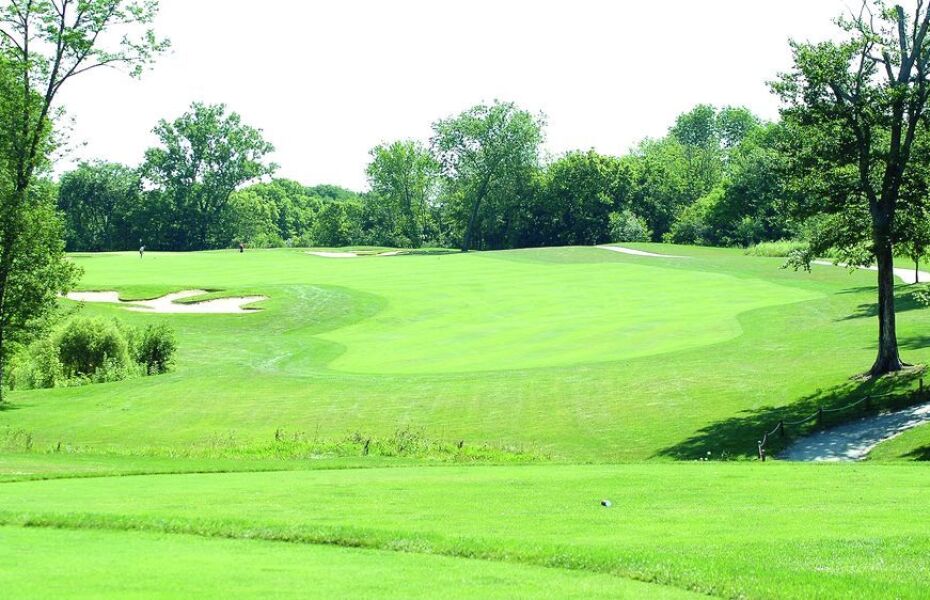 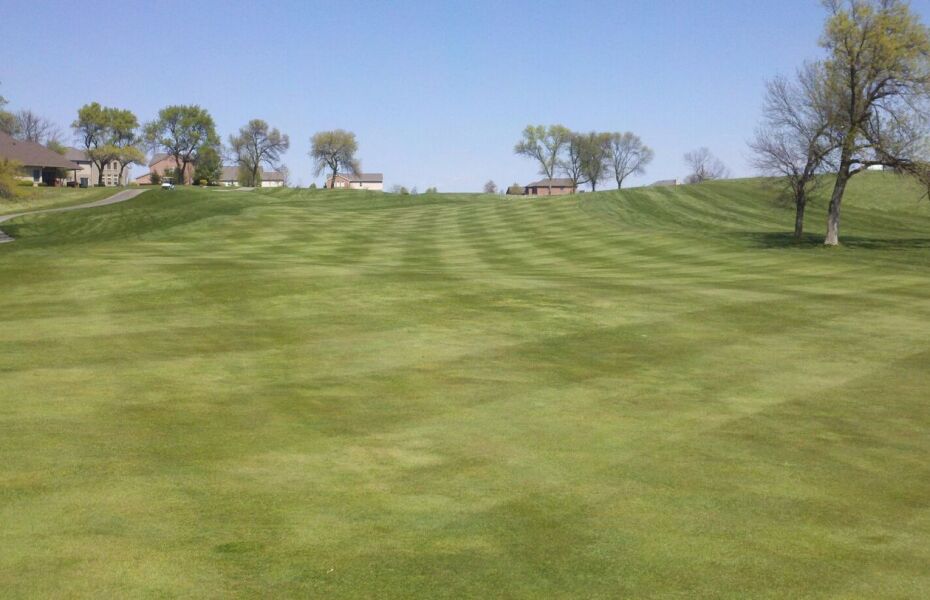 A view from a fairway at Moss Creek Golf Club 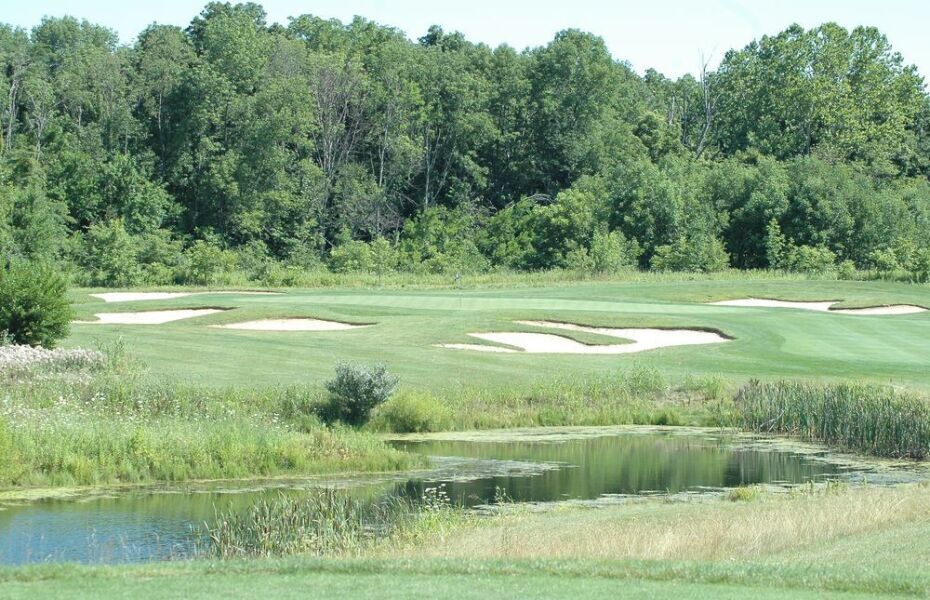 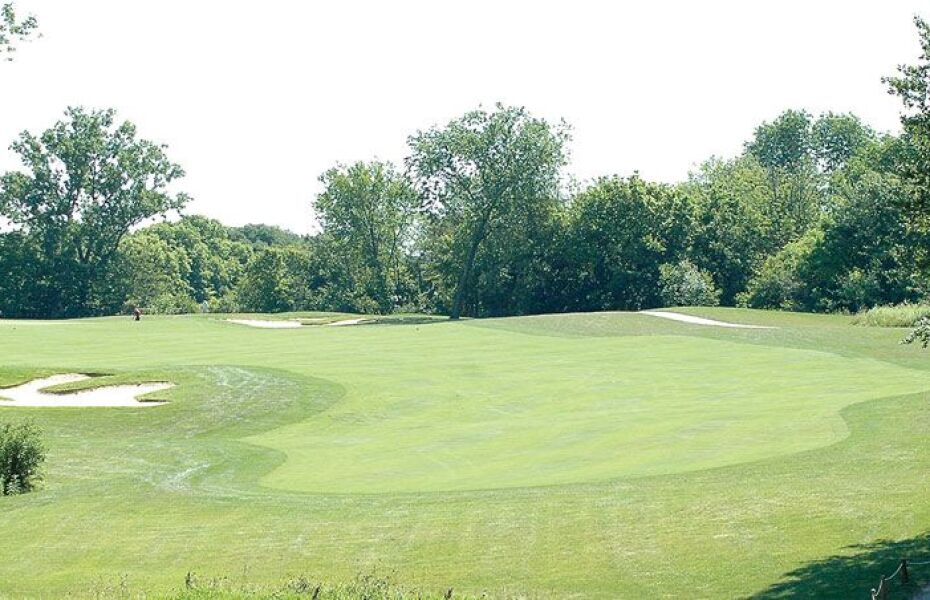 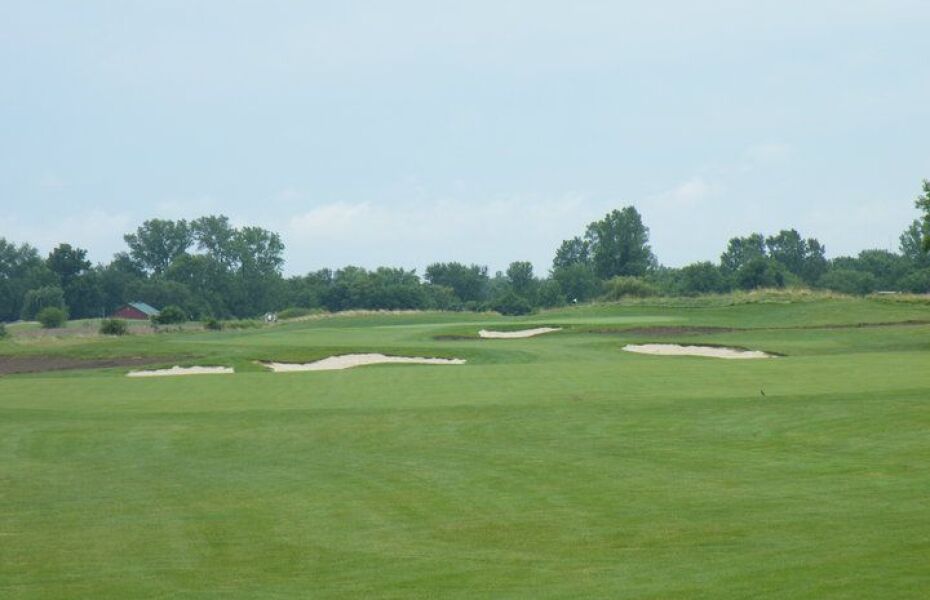