The rain has really helped the course grow back into something decent, the rough in places is deep but I prefer courses set up that way.
The greens are slow just not painstakingly slow which considering how they were before is a vast improvement.
Overall I don't mind playing the course, I just would not play there frequently, once every six months is enough.
The course is short, only 6500 from the tips but that is perfect for the locals as the course is in a retirement community, also the scorecards don't give you the distances from the tips.

This course was in great shape after all of the rains we've had. The staff was very friendly and I had a wonderful round. I like it better than the others that I've played in Sun City. I plan to return.

Thank you for your business as well as the kind and positive review. We truly appreciate your time. We do our best from the turf crew to the shop to provide a great golfing experience and are very proud of the hard work that goes into letting Scepter shine!

The front nine was a little easier than the back (Falcon) a couple of more interesting holes. Overall a good track for a fair price....will be back next week.

Thank you for the very positive review. The team works very hard to offer a fantastic golfing experience in this great community. We appreciate that you chose to play our course multiple times!

My friend and I had a 2 pm Saturday tee time. There were no delays and not many people were on the course. The course was in fabulous condition. The greens were not fast but they were in great condition. The course layout is difficult enough to challenge the average golfer. My friend had a difficult 18th hole. He asked the ranger if he could replay the hole and the ranger said OK. His second attempt was still not successful. We would definitely play here again. The clubhouse has water, ice and snacks but no restaurant.

I played Scepter in May 2018. The Osprey 9 holes were in nice shape from tee to green, was pleasantly surprised. The Falcon 9 was in pretty poor condition. I swore i wouldnt go back unless we played Osprey/Ibis.

Reluctantly, we chose to play Osprey/Falcon today. The Osprey was still in good shape, but the Falcon course was a night and day difference. We have received so much rain this summer, most of the courses are cart path only. I was amazed at how much better the Falcon course played. The tee boxes, fairways, and greens were almost as good as the Osprey.

I'll definitely be putting Scepter in my rotation of courses now. I have not had the chance to play the Ibis course, but from what big could see, it looked to be in great shape as well.

Thank you for the positive review. The turf crew works extremely hard , especially in the trying Florida summer conditions. They've done a great job and appreciate your kind words. We are glad you had a great time and hope you will play again soon.

Loved It, thank you for going above and beyond

Thank you to Sceptor. First time on course.
Would come out again in a heart beat.
Florida in the Summer. Got 9 in stopped and had a great sandwich at the turn. Went back out. Drenched.
Called back on the 3rd. Roy in the Pro Shop said please come back out and finish.
I did and got my back 9 in.
Above and beyond. Thanks to all at Sceptor and be back soon

Thank you for the fantastic review. The staff works hard to provide great service to all of our golfers. We hope to see you again.

Scepter was in excellent shape. My foursome showed up early and the starter got us out 15 minutes ahead of schedule. The course conditions were excellent. The greens were fair and consistent regarding speed. The rough was high but fair. The course is not overly difficult but challenges every club in the bag. The staff including Heather were friendly and helpful. There was water and ice available but no place to grab and a dog or sandwich on the turn. For $27, Scepter is a bargain. The ranger did a good job about keeping traffic moving. We will play here again.

Thanks for the 5 star review. Inside the clubhouse is the Palm Court Restaurant and Bar, you can call them and order take out for the turn.

I would not recommend this course because of the way I and my group was treated. The ranger came to us and without inquiring first, accused us of hitting into the group in front of us. I explained to him that I am not new to this game and despite the extremely slow play, (something he should of been checking on) I would never hit into someone despite how slow they were playing, that's what your job is for buddy. This fact plus the slow play and the sad layout, I would not want to go back there, also the course does not have the distance for the back tees on the scorecard, I was told they do not have many people who play from back there so that is the reason why it was left off of the scorecard. I just don't think the course is worth the money nor my time, for whatever I paid here, I would add a few dollars and play Renaissance or Cypress Creek which are just 5-10 minutes drive away.

So I'll start off by telling you, there are comparable courses in the area that will give you a better deal for your bucks. I've played here a few times and had no problems. Although this time the Ranger approached me and my group and accused us of hitting into the group in front of us, without asking us if we did or not, which we did not. At the end of the round I went in and told the manager in the proshop who offered an apology. As for the course we played Ibis then Osprey, the t boxes are not in too bad of a shape, the fairways and greens have their moments of being worn thin and patchy. There are no GPS on the carts and the scorecards do not have the yardage for the blue tees, the pro said "when we changed the course, we did not order new scorecards because most of our players don't play from the tips". There has never been a cart girl on the course, so be prepared. I live in Ruskin and only play the course when my Sunday group goes, if I had my way we would play either Renaissance or Cypress creek. One last thing, be prepared for a really slow round on the weekend. Hey ranger Rick help speed up play, if you're going to do a job, don't do it half of it.

Thank you for playing the course and we appreciate the honest 3 star review. We'll work on the customer service opportunities that we have to ensure that you have a better experience next time you visit the course.

Lots of water for errant shots

Nice course in good condition. Greens were a little on the slow side, but I suspect the mowers are set higher with the area in draught. Welcoming gentleman at the pro shop.

Thank you for playing and your 4 star review. The course has stayed in great condition despite the dry winter and we are glad you had a good time. The staff works hard to provide great customer service and we appreciate your recognition. Hope to see you at the course again.

Our Snowbird condo is located right on the Ibis course first tee. Never could afford winter rates but got a summer rate Hot Deal. Being a Michigander I find Florida courses being in poor shape and different overall. This was the best of the 4 FL courses played so far. Enjoyed it very much with 3 friends.

Thank you for playing and your 4 star review. The whole staff is working hard to keep our customers happy and we are glad you enjoyed the experience. We hope to see you again.

Enjoyed playing and would play again

First time playing ibis course and wished we could have played the other nine of scepter as we have not played it yet. Pace was a bit held up but not bad. We did not have any drink or food after as we were not sure it that was open to non members.

Thank you for playing the course and your 4 star review. We truly appreciate your business. The clubhouse next door to the course is open to the public for food and drink. Hope to see you at the course again.

For a private course I thought it would be in better shape than it was. It wasn't that it was in that bad of shape but that it wasn't any better than the public courses that we play.

Thank you for the review. The course now has a new superintendent and is looking very good for summer 2017. We hope you come out and play the course again.

This is a private course that allows GN in during the summer. I was totally disappointed. All around condition and routing were no better than local public facility. It appears new ownership is letting this one go.

Had a great time playing course.

Great place to be

Great layout, not long but have to be straight or else in the water almost every hole -- one suggestion when you go there -- be sure to look out the sign, it could end up someone's backyard as the cart path wondering around ...

Only open to the public in the FL off-season!

This is a private course & only open to the public during off season. It is a beautiful & well maintained course. It is a bit hard to navigate, so watch closely for signs to next tee. A few club members and the starter seemed none too happy with us non-members playing their course. Starter told our foursome we were not really supposed to be there, that GolfNow really screwed up giving us a morning tee time. He was rude and clearly annoyed we were there. This outing was a scouting round for us. We and our spouses are locals and are looking for a home course and club. We really love this golf course, but all of us were very offended and put off by how we as visitors were received and treated!

Greens were in good shape and everything was well taken care of. Will be back 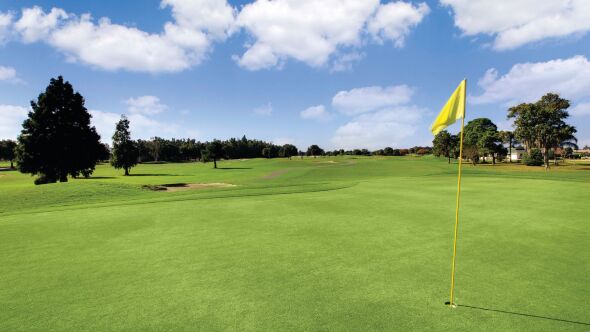 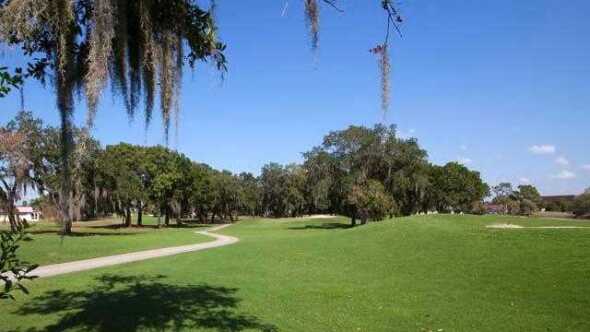 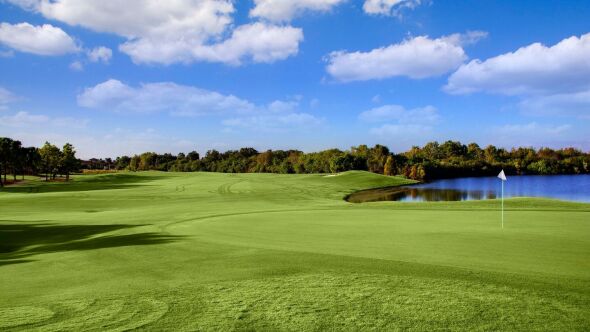 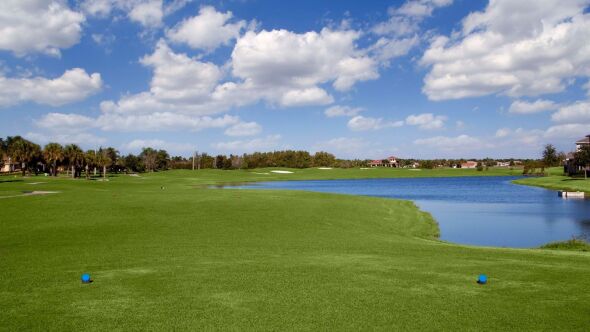 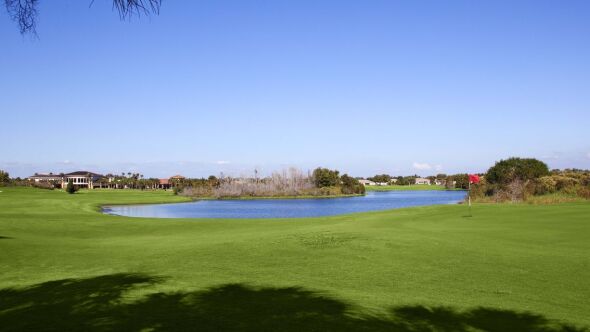 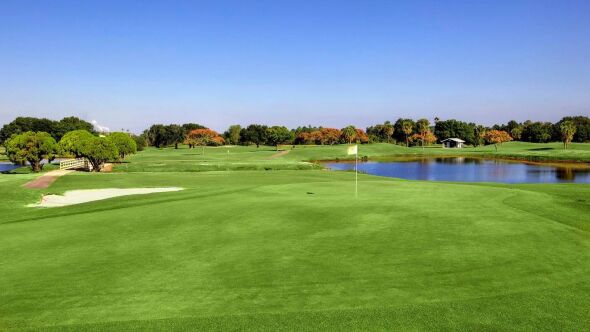 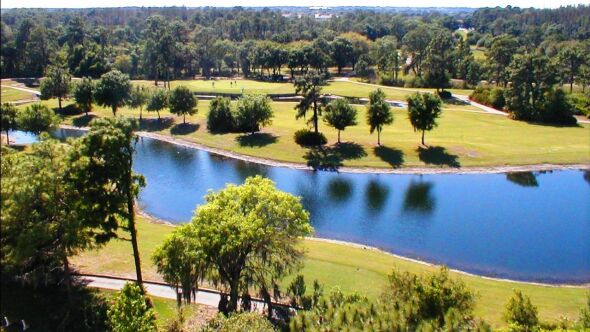 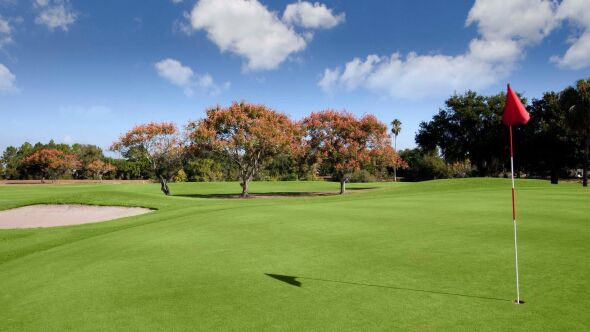 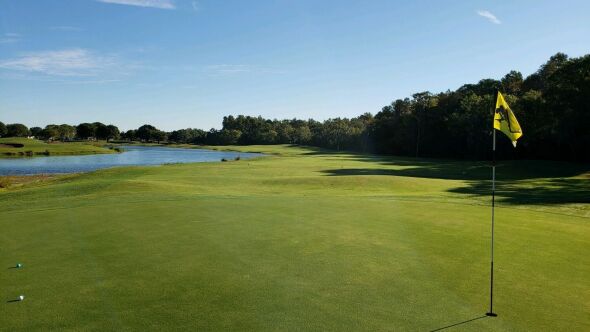 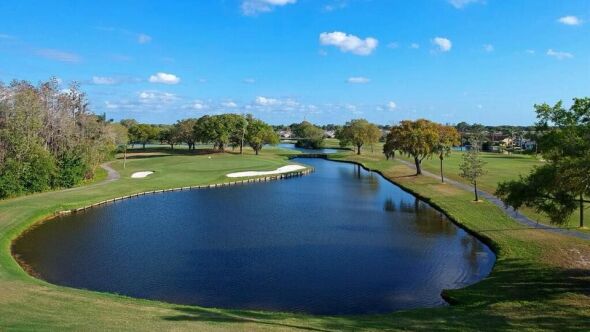 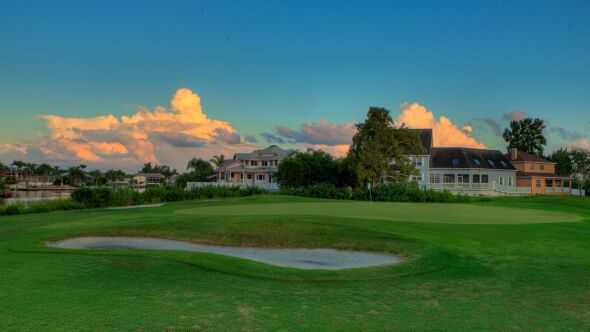 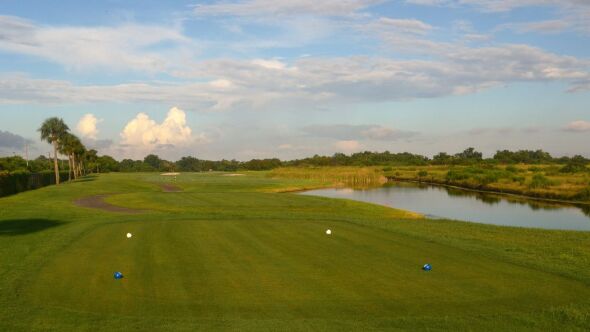 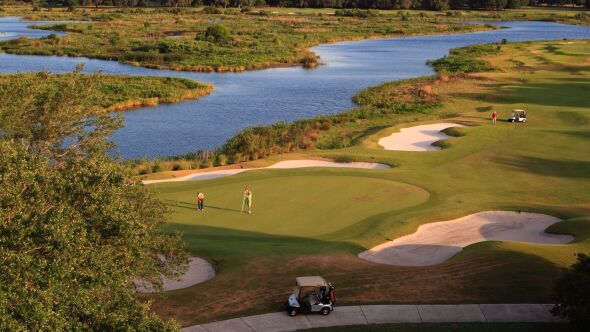 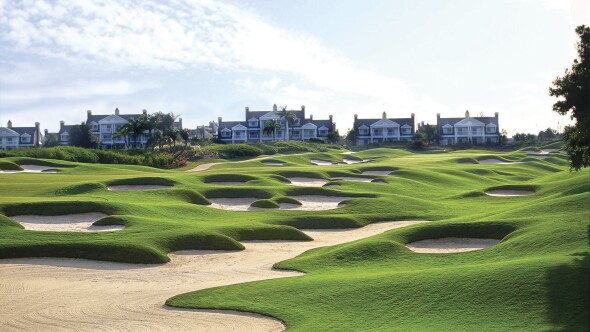 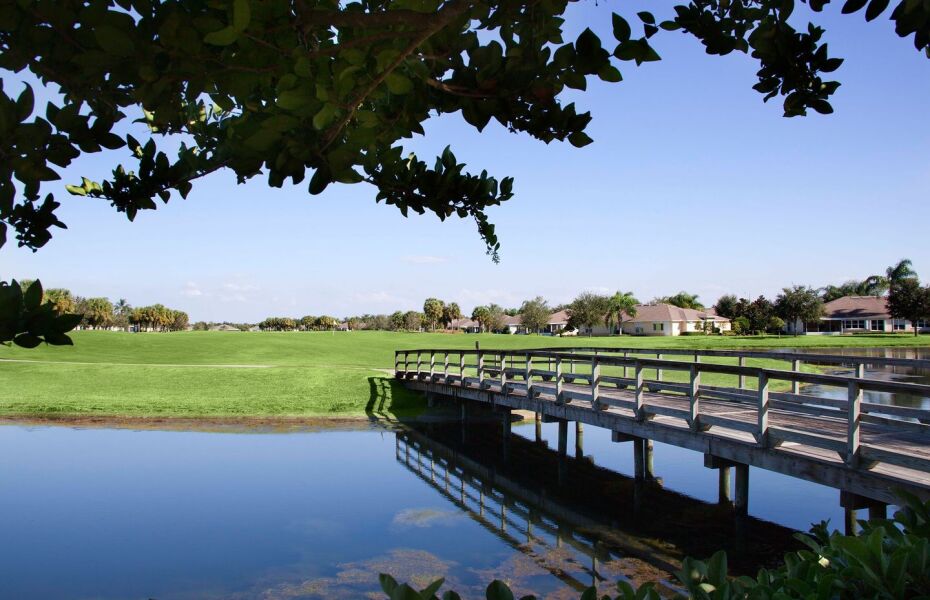 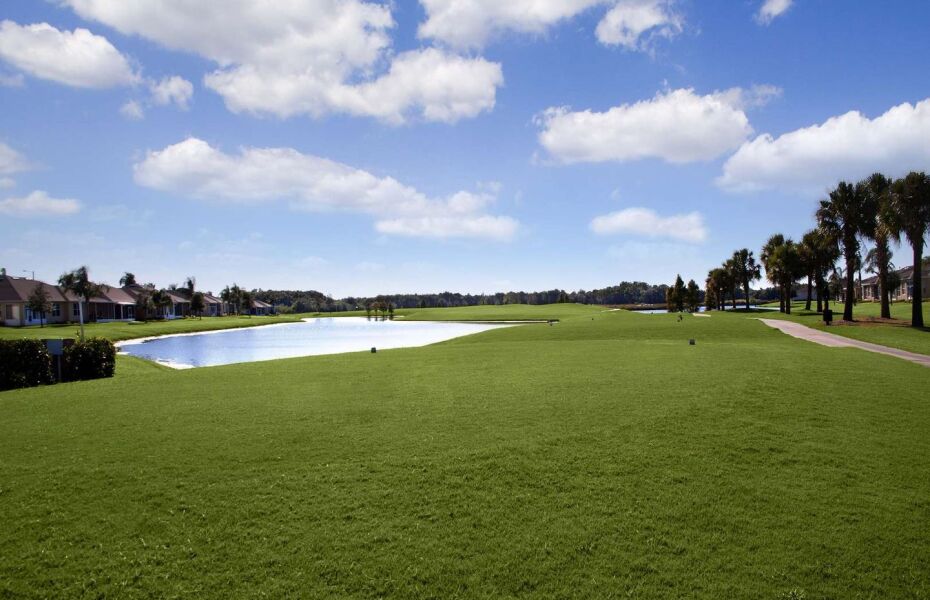 A view of a tee at Scepter Golf Club. Scepter GC 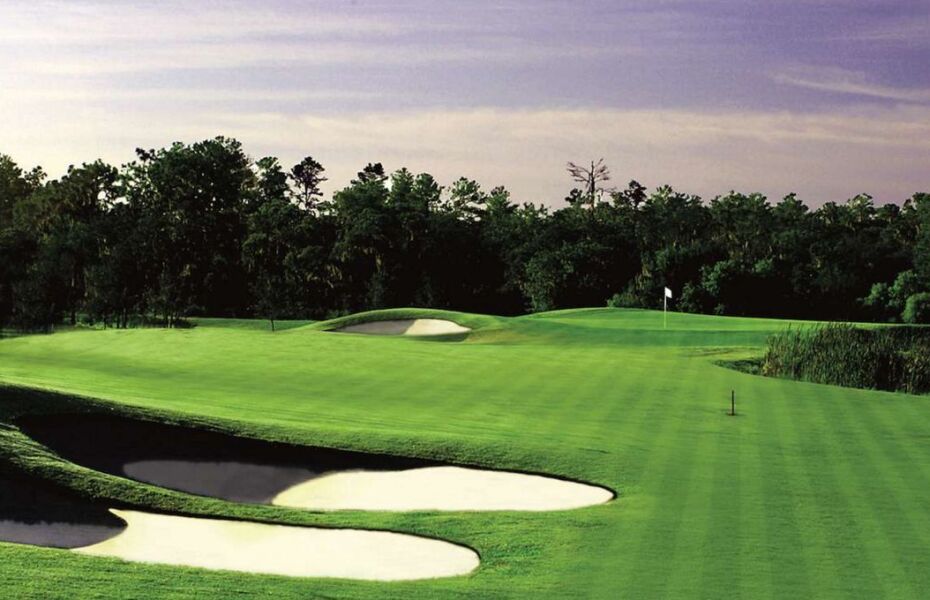