See my review 7/2/17 below. Clubhouse is still not open except for the restrooms. Many traps were decently maintained and they had rakes out. No pool noodles in the cups. Greens were in really good shape and were rolling smooth. Spied a nurse cart out on the course just after 10am.....no water and it appears they do have limited beverage service at the check in counter. Palmira's routing is a real gem in my humble opinion....you can easily run up a big score on any hole here. Greens are challenging lots of movement to them. Fairways were in decent shape overall same with tee boxes. Teed off on a Friday morning at 7am....done by 10am....wonderful round and experienced much better conditions then almost 4 years ago. They do need to wash down and clean/wash out their golf carts...they are pretty filthy.......Highly recommended....solid 3.75 stars...gave it a 4 because Palmira is a really good value $34 senior rate during the week. My playing partners first round at Palmira....he enjoyed it... and already wants to return.

We all know during this COVID period most, if not all, the golf courses are experiencing higher than normal rounds of golf this season and courses are trying to make up revenue for the months they may have been closed. But that does not excuse misleading people when the course is specifically asked the question “Do you have an outing today?” This is what happened to our group on Friday, August 14th. After we got in line to tee off, I noticed a threesome, a five-some and a twosome in front of us. I asked each group when their tee times were and they told me 10:30, 10:40 and 10:50 respectively. I asked the starter what is happening, and he told me “Oh, we have an outing going on and these groups started in the middle of the course”. Needless to say, I wasn’t happy once we teed off at 12:30, a half hour later than our scheduled tee time. We ended up playing in 5 hours and 20 minutes.

Before I go any further, our scores were 76, 85, 96 and 101. I shot the 76, so nobody misconstrues this as just another golfer shooting a bad round. I was quite happy with my score. Plus we were right on the twosome in front of us all day.

The two “kickers” were when we made the turn. A twosome tried to squeeze in front of us on the tenth tee. We asked them what was going on the said they were told that the leagues were starting and to go out to the tenth tee. We told them we were coming off number nine and we had priority on the tee.

The second problem, when teeing off on 12th tee, we look over to the 13th hole and we see five carts and ten players playing that hole. After calling into the clubhouse and sending someone out, we were told they were part of the outing and were just finishing their round. I guess that makes it OK to have a ten-some then???? After seeing the ten-some, this would explain the long round.

The course itself was in very good shape and I always enjoyed playing at Palmira. I would play it again, but management needs to be more truthful with their patrons before that happens. Therefore, I’m giving Palmira 3 stars. 5 for the course and 0 for the management.

Talk to someone on the phone to book. I was quoted one rate and charged more then what I was quoted.
Web site says $25 after 4 to walk, and I’m being charged $30 for Sunday??!

3rd time playing, 1st this season. I like the routing and greensites on this course. Bunkers are not maintained at all and sure it's rough around the edges but there are several holes on this course that provide nice challenges and thoughtful shotmaking. Greens were in very nice shape shape - smooth and rolling well. Gravel cart paths so it's very bumpy. No water jugs on the course so provision up prior to heading out or at turn. If you haven't played Palmira you should I've always enjoyed my day. Grass Range, good practice area. Old school clubhouse which helps with the quiet "rustic" charm of what I consider a hidden gem to get back to a few times a year. Hardly anyone there on a holiday weekend afternoon? Amazing. You do have to call for a time....no online tee sheet. $30-$40 course, 3.5 stars (if they had water on course and maintained the bunkers it would 4 stars plus). A fun interesting play with lots of water on the back.

This was a fun course. Lot of short par 4's. Lot of elevated tee shots. Fairways are pretty narrow. Played on a Friday afternoon for the $29 twilight fee. Got on just after a highschool golf event finished so there were a lot of people around. Course was not crowded though and we played at our own pace. Never had to wait on anyone or had anyone push us. Course was in very good shape for being after a tournament. Greens were big and well kept. Large driving range. Didn't care for the practice putting green. Most holes were bumpers and only two cut out. Clubhouse was small. Staff was very friendly. Beer was a good price. They had Yuengling. Wish this course was on golfnow. Seems pricey unless playing the twilight fee. Would be a great to get a hot deal. I will go back.

First time played in very windy conditions. Already want to go back. Several really neat golf holes. Course was in decent shape except for the sand traps which are not maintained at all and some tee boxes which were pretty chewed up. Course was very wet from recent rains however the greens were in very decent shape...not aerated as of 10/17 and rolling well. The clubhouse isn't much to speak of but the prices are reasonable. The cart paths are gravel and it's a bumpy ride in turn avoiding wet areas. The rough was very long...in process of cutting it......but the track is decently maintained enough and there are plenty of challenges throughout the course. The $25 paid was well worth it. The course is especially pretty with all the fall colors. 3.5 stars in my book......if I can get on for $30 or less it's still a solid test of your game even if the conditions aren't pristine. Reminded me a tad of the now closed Oak Club of Genoa in some aspects. Elevation changes, plenty of water and the course features some interesting twists and charms with a nice finish - 15th par 3 has a 40 yard huge wide shallow green, short par 4 16th features a tree to navigate in the driving zone, 17th par 5 requires a well placed 2nd with significant uphill approach to a green surrounded by trees and the par 3 18th is a very pretty over the pond finisher. Happy I finally "found" this place.....one to get back to a few times.

We paid $35 to play on a weekday, this course is not worth $35,
-sand traps in horrible conditions
-clubhouse, old, outdated, might be the worse in Nw Indiana
-gravel cart paths
-no beverage cart on course

We payed $35 per person on a weekday, this course is not worth $35.
-sand traps in horrible condition
-gravel cart paths
-outdated old clubhouse, might be the worse in Nw Indiana
-no beverage cart seen on course

First the negatives. Most of the traps are terrible. The facilities and carts are dated. The pace of play the day I played was terrible for the second nine but I did the back first and when I made the turn on a Friday every cart was out. Now the good. This family run facility has a great staff that works to make sure you have fun. The scorecard is extremely helpful for singles or visitors. Shows the hazards and distances. The course conditions, in late September, were excellent. The greens were extremely good and rolled true. The holes vary greatly adding to the enjoyment. Each hole requires a different strategy to navigate it successfully. There is lots of water on the back nine and terrain on the front to provide some good challenges. Would definitely play again as I was visiting family and this course is definitely staying on the playlist. 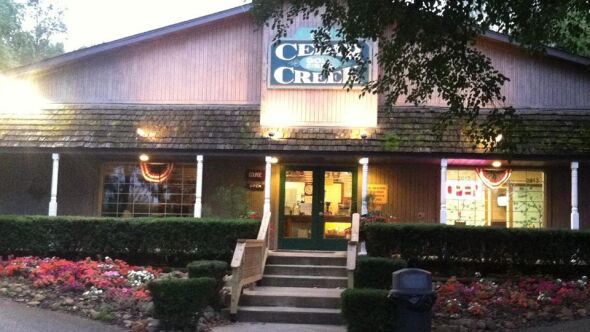 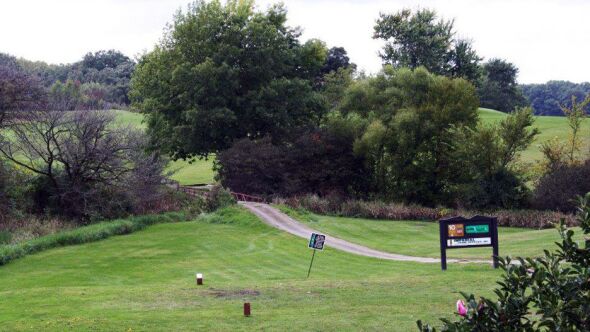 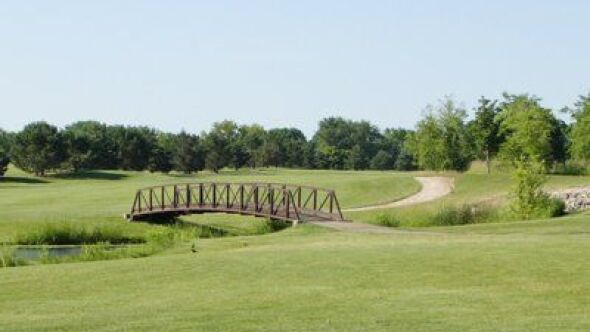 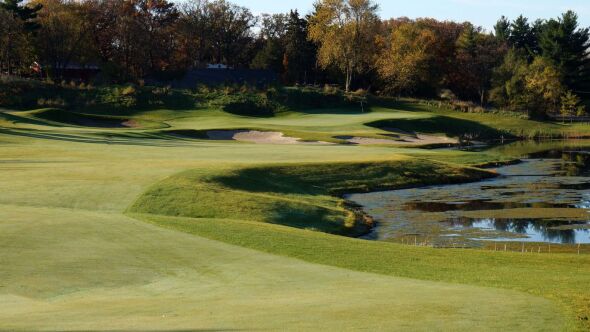 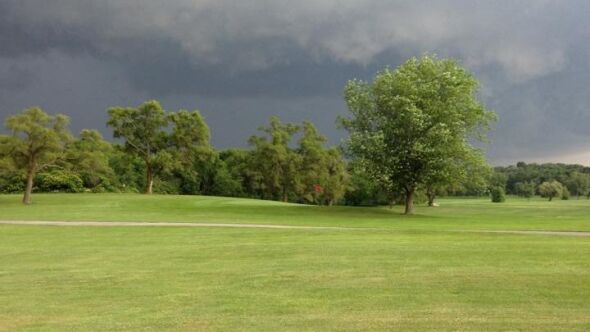 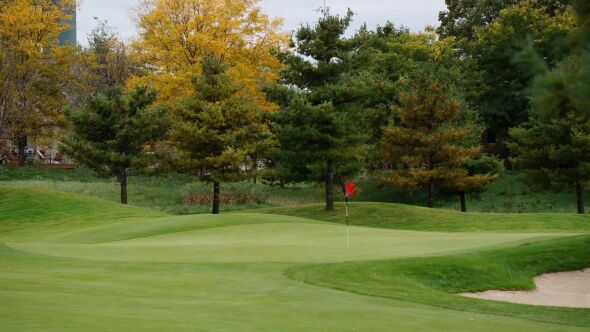 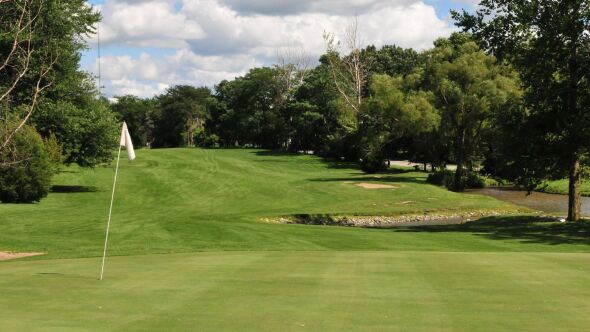 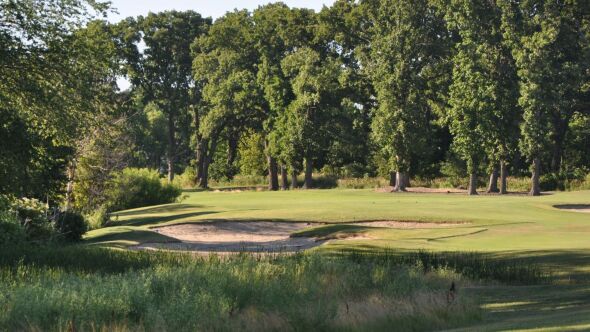 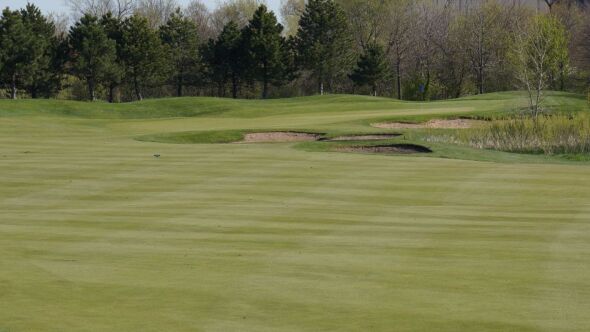 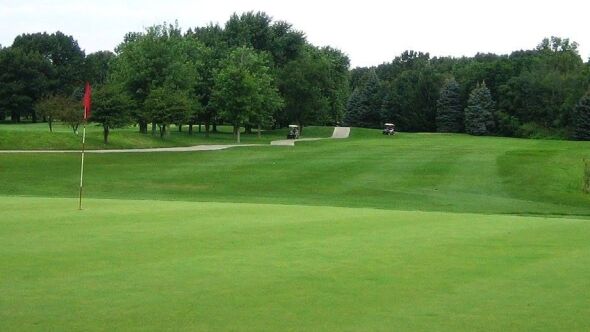 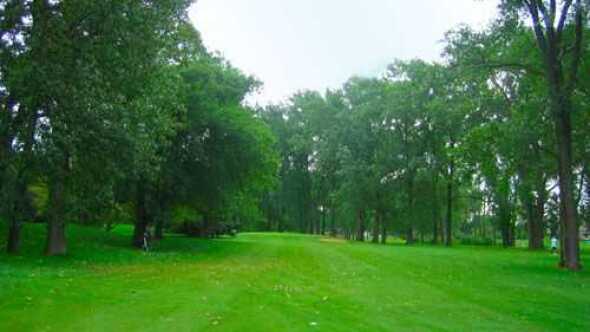 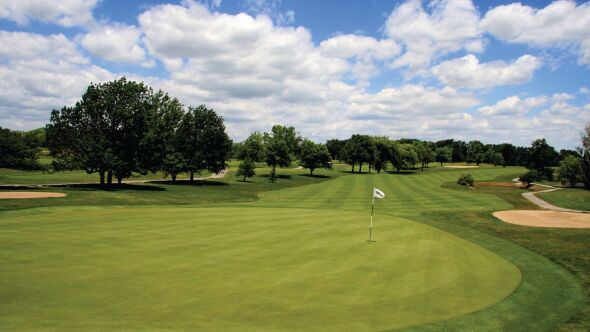 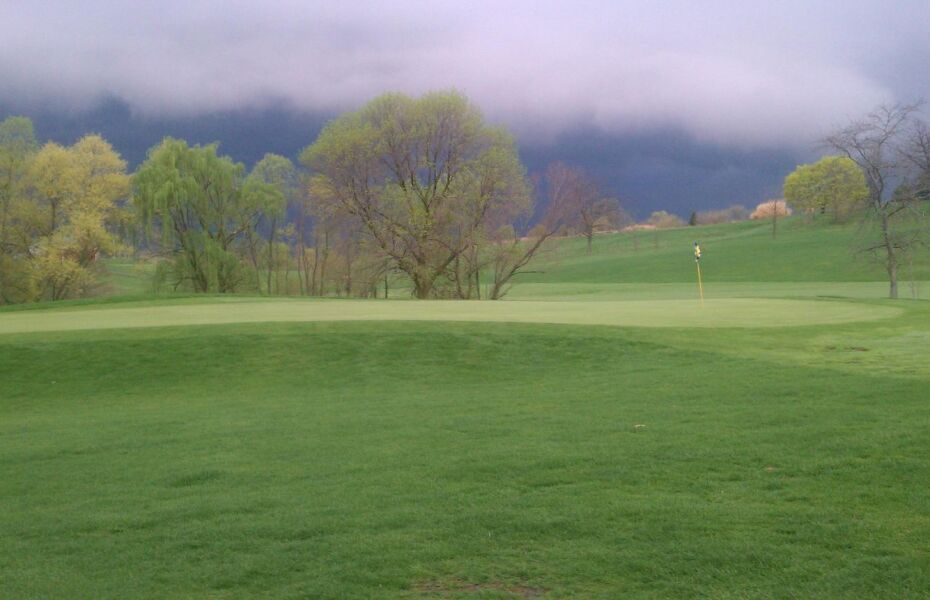 A view of a green at Palmira Golf Club Palmira GC 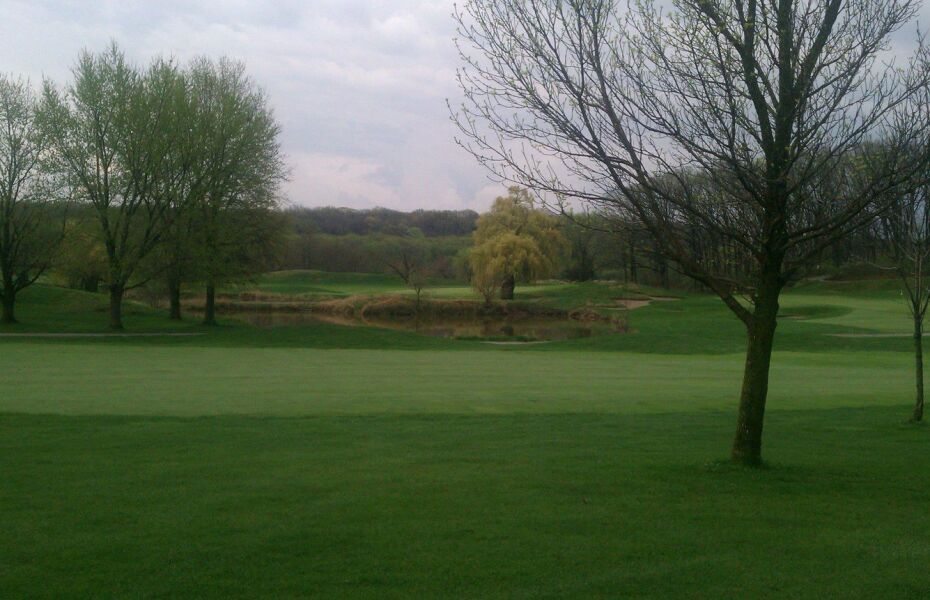 A view of fairway #11 at Palmira Golf Club Palmira GC 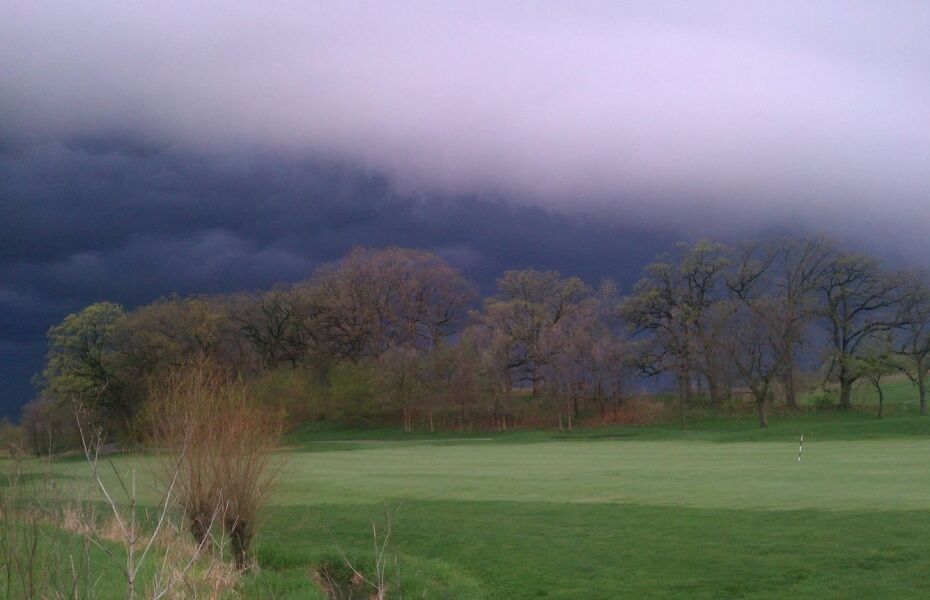 A view of fairway #8 at Palmira Golf Club Palmira GC 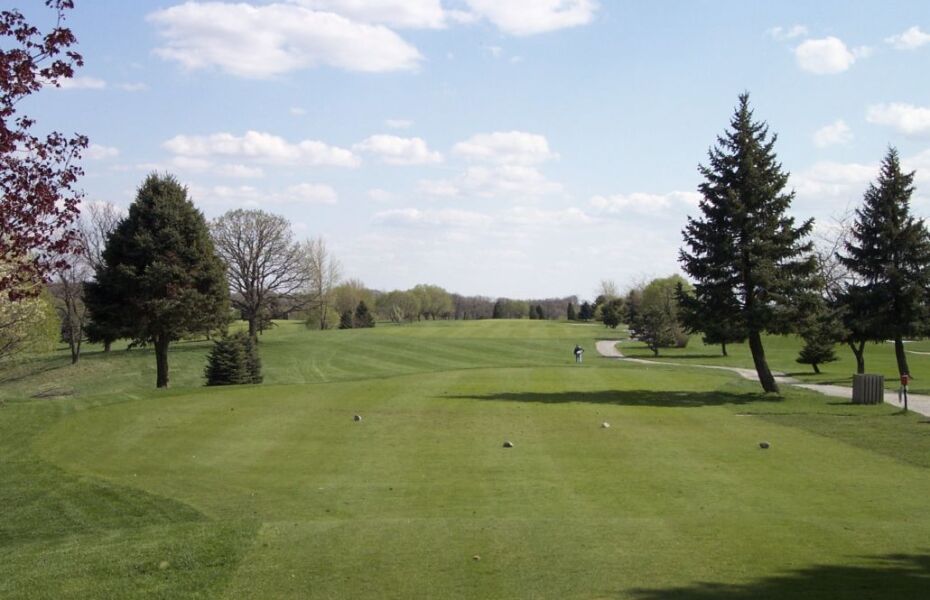