Difficult dealings and 'years of delay' resulted in legal action.

WHITE SULPHUR SPRINGS, W.Va. - The Greenbrier, under the auspices of the Greenbrier Hotel Corporation, Justice Family Group, LLC and "other entities," has filed suit against several insurance companies and brokers over underpayment related to the floods that ravaged the area in 2016, resulting in the loss of more than 20 lives and extensive damage to southeastern West Virginia.

"The Greenbrier entities and the Justice Family, which owns the Greenbrier Hotel and related properties, spent nearly three years attempting to amicably deal with representatives of the various insurers in an ongoing effort to fully and finally resolve all claims and to receive compensation for the significant losses incurred, for which substantial insurance premiums were paid to the various insurers," resort officials wrote in a statement. "After years of delay on the part of the insurer group, the patience of The Greenbrier entities and the Justice Family finally came to an end, resulting in the lawsuit."

Among the victims of the flood were several Greenbrier employees, who lost homes and loved ones. Their livelihoods were threatened as well - lost business at the resort meant a halt to their potential income.

In the aftermath of the flood, resort owner - now governor of West Virginia - Jim Justice and his family worked at breakneck pace to get things back up and running, including the Old White TPC Course, which hosted the PGA Tour's Greenbrier Classic. The floods forced the cancellation of the 2016 event due to damage throughout the resort's golf facility.

Thanks to the efforts of the Justices as well as Greenbrier golf superintendent Kelly Shumate and others, the Old White TPC rounded into shape to host the 2017 Greenbrier Classic. Additionally, Shumate redesigned and rerouted the resort's Meadows Course, bringing the complement of golf back up to 36 holes for resort guests. The private Snead Course is also back up and running for its members, and a new nine-hole par-3 Ashford Short Course debuted in August 2018.

The future is less certain for the resort's Greenbrier Course. Several of its holes were incorporated into the new Meadows routing, and while there have been plans to reconfigure it in accordance with its Seth Raynor design pedigree (including by Phil Mickelson's design team), that project has yet to begin. Presumably the unpaid insurance claims over which the resort is suing will contribute to this effort, as well as the long-planned new Oakhurst Course, a private golf course co-designed by Lee Trevino, Tom Watson, Jack Nicklaus and the late Arnold Palmer.

I had the chance to spend a couple days at The Greenbrier last summer, and was impressed at the extent of the resort's recovery. One would never guess that the Old White TPC had had to be pieced back together after the floods. The Meadows Course routing is a bit spread-out due to a couple lengthy green-to-next-tee transitions, but Shumate clearly put considerable effort into making it into a cohesive golf experience, and he succeeded. With the requisite resources, a revamped Greenbrier Course would bring the resort's golf complement to a peak of 63 holes, reestablishing it as one of the country's most comprehensive stay-and-play possibilities. As it is now, though, it's plenty engaging.

In addition to proper remuneration, the lawsuit seeks to "make an example of the insurers so that the heavy-handed, mean-spirited and egregious conduct to which The Greenbrier entities were exposed will no longer be imposed upon others who have paid good money to insurance companies to cover losses when they occur." 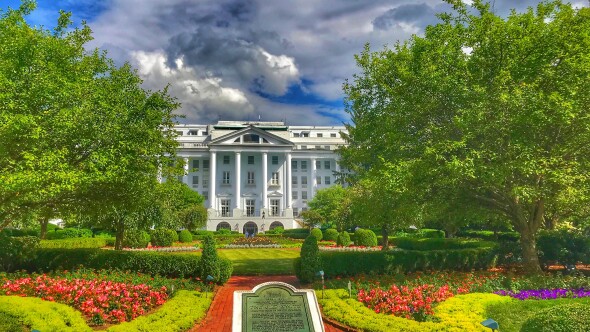 Articles
9 Min Read
The Greenbrier is big, beautiful and unforgettable
The Greenbrier styles itself "America's Resort." That's a bold claim. Is this grande-dame retreat worth your visit?

Love the comments but ask why would a nation put its health care in the hands of insurance companies?

Fascinating! I hope you can post more specifics what what is meant by "heavy-handed, mean-spirited and egregious conduct" by the insurance companies and who those companies are. The flooding was catastrophic and it will be interesting to follow this lawsuit to see what was and was not covered.

Damn! I love their additional language that includes "making an example of the insurers"!

Why don't more people with the Horsepower take this position, when necessary? We've all witnessed large insurance companies assume adversarial positions in so many cases that follow years of charging Premiums. To wit: a Class Action by the poor bastards who lost homes to the Kilauea Volcano, against none other than Lloyds of London, was required to force them to pay for Homes lost in the event.

Insurance companies fund a large portion of most political campaigns on both sides of the isle so that they get any legislation they want passed. Consequently they are only one spoke away from true mafia controlling your and my congressman. Don’t look for a significant settlement, they will undoubtedly pull strings and buy off judges to get there way!

Was always told that you can steal more money with a briefcase than you can with a gun. Wall Street bankers, brokers and insurance companies prove that this is true.

To compare insurance companies to the mafia or organized crime is NOT unfair. Why there is not more focus on how unfair their business practices are is beyond me. They truly believe it's a one way street where they recieve until it's payout time. I understand they (insurance co.) deal with a lot of fraud but refusal should not be the first reaction when claims are brought. I hope this turns out well for Greenbrier.

People must start to know that insurance companies are not there to help you but only to make money for themselves. Until customers start to bitch & sue the insurers over lack of satisfaction and underpayments they will continue to shortchange anyone or any company that they deal with. So hats off to The Greenbrier & i hope they get paid properly and even more for damages.