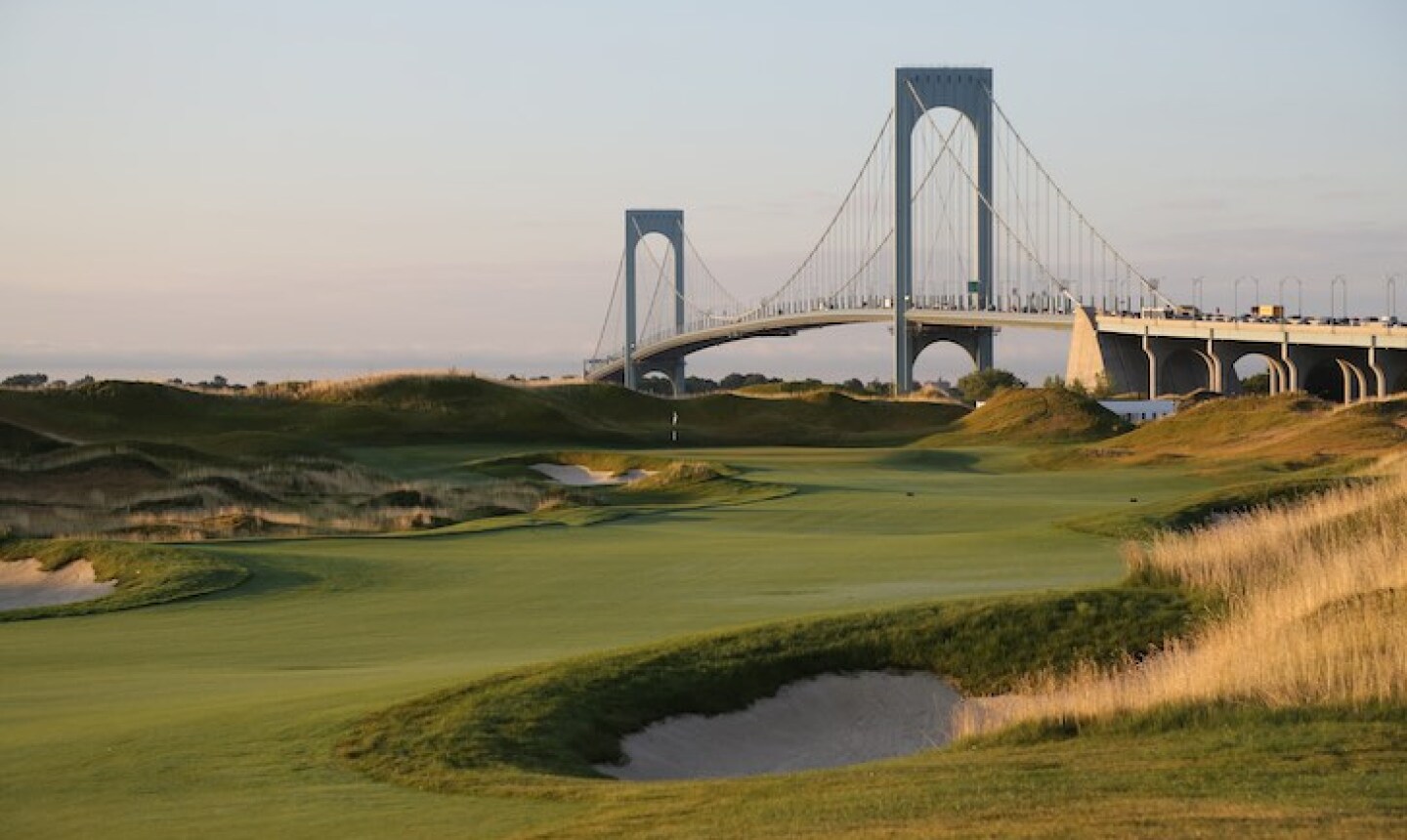 It took more than $200 million to get it squared away, but one would hardly realize that Trump Golf Links at Ferry Point sits on a former municipal waste dump. (Courtesy of The Trump Organization)

With Earth Day coming up later this week, we were wondering about golf-related ways to mark the occasion. Something fascinating occurred to us:

There are a lot of golf courses that have replaced far less desirable sites: industrial sites, landfills and other non-golf entities.

We're biased, but we tend to think green spaces are better than metal, smoke and concrete. And if those green spaces happen to have 9 or 18 greens, even better.

The 2015 U.S. Open host venue, which drew all kinds of disparate comments from players and spectators alike, was built on the site of a century-old gravel pit. More than 100,000 truckloads of sand and fill were brought in to turn that spent site into the wild, terraced scene that is Chambers Bay. The first U.S. Open held in the Pacific Northwest was a rousing success, meaning that despite some initial discomfort with the course, golf's best players will get another crack at the Jay Blasi/Robert Trent Jones II design before too long.

The highest-profile and most expensive-to-build of all courses on this list by far - the total cost has been estimated at $236 million - is a Jack Nicklaus/John Sanford effort that transformed a municipal waste disposal site into one of the most anticipated new courses to open in the Northeast in years. The completely manufactured landscape is partly Irish and partly lunar in aesthetic, with hundreds of grass-covered dunes dotting the site. Nevertheless, there is no doubt that the golfer is playing in the middle of one of the world's biggest cities, as the Whitestone Bridge lords over the scene.

Built for a fraction of the cost (just $20 million) and with a fraction of the fanfare of the Trump course, Skyway is a nine-hole track on a former city dump that opened in June 2015, making it the closest public golf course to Lower Manhattan. It is also playable for a fraction of the rates commanded by Trump Golf Links - weekend 18-hole rates top out at $63, against a top Trump tariff of $219. Architects Roy Case and Jeff Grossman fashioned a layout of three par threes, three par fours and three par fives that is already being lauded as a great escape from its urban surrounds.

If you live in or around Boston, the phrase "Big Dig" probably still causes headaches. The 15-year, $24 billion project to overhaul the area's roads and other infrastructure caused years' worth of travel delays. But one bright spot of the enterprise was the construction of Granite Links, a 27-hole layout built on the site of former municipal landfills and granite quarries. The course's hilltop location affords views of the Boston skyline, with the fill on which the course was built coming from certain Big Dig excavation projects. John Sanford, who assisted Jack Nicklaus at Trump Ferry Point, gained experience in reclaimed-course architecture at Granite Links, which has a similarly open feel, but with more elevation change.

Streamsong sits in an undulating portion of the thousands of Florida acreage owned by multi-billion-dollar phosphate mining giant Mosaic. The result of the use of that site for mining? Pure sand: perfect for golf. Bill Coore and Crenshaw (Red) and Tom Doak (Blue) laid out its original two courses, and Gil Hanse is putting the finishing touches on a third (Black), which will open next year.

Thinking about the Palm Beach area conjures visions of blue ocean water, palm trees and amazing wealth. So it's strange that one of the area's best public golf courses is a "brownfields" (former landfill) course, designed by Roy Case. Hailing from England, Case embraced the undulating, open nature of the site to craft a course that is one of Florida's best municipal layouts.

Central Michigan is prime mining country, and The Mines is built on the site of former gypsum mining activities. The course embraces this heritage not just with its name but with one of the best public-course logos we've seen. Furthermore, materials from the mining operation were incorporated in the design of the course.  An example of the minimalist design philosophy of Mike DeVries, the course only has 31 bunkers - including half a dozen bunkerless holes - so its main defense is a set of fun but potentially fearsome greens. There are not too many courses by name designers whose green fees top out below $54, but The Mines is no ordinary course.

This is just a selection of our favorite "reclaimed" courses. Are there others you want known? Tell us all about them in the comments below!

If one could look beneath the bucolic settings, one would see the cancer-causing chemicals that lie beneath these golf courses.

Harborside International Chicago.
Original Chicago landfill reclaimed. I was there for the construction. Shaped the 36 holes on the landfill, dammed and drained a section of Lake Calumet. Hauled clay from the lake bottom and placed a 4' cap, added "new earth" from the Chicago waste water reclamation dept. and blended with sand from Indiana, traded for clay. Turned a three year project into two by a force of 40 plus heavy equipment operators working 14 hours a day seven days a week!
Lake dredge turned to new marina. Recycled onsite concrete to gravel for paths.
Nearly 500,000 dump truck loads of new earth and sand, not including the clay haul.
Impressive views to the city.

Settlers Hill in Geneva,IL (40 miles west of Chicago) is on a former landfill and has become an area favorite. It is an interesting combination of links and parkland.

The Home Course in Dupont is built on the old munitions depot from WWII and the site of the old fort. Fantastic views and there are bunkers and rail line from the old fort and factory on the grounds. It has also hosted the US men's amateur and US womens publinks championships. Aside from being the home of Washington's golf organizations such as the WSGA and USGA.

City of Industry near LA has the Eisenhower and Babe courses on site of old landfill. Both interesting tracks.

I was just looking to comment on these very tough courses where my family used to dump our trash. I've played both courses in the early eighties and they kicked my butt. Both are beautiful and well maintained courses. The whole facility is powered by the fermentation of the garbage below the fairways.

Thanks Dale; made that change.

The Golf Club at Newcastle in the Bellevue area of WA was built on a landfill which had been a coal mine before that. The two courses are beautiful and challenging, but it is the amazing views of Bellevue, Lake Washington, Seattle, and the Olympic Mountains that sell the course for me. And if you are with the family and they don't want to play golf, the clubhouse is spectacular. The 44,000 square foot building has an elegant restaurant and banquet facilities and also takes advantage of the views.

I will second Iron Valley in Lebanon, PA one of my favorite courses anywhere with awesome views of the valley below, huge elevation changes, and some pretty tricky greens. One of the water hazards on the front 9 is actually an old mine shaft filled with water and they have a depth gauge that usually reads well over 800 feet. Great course and thought it might make this list.