A beginner's guide to golf in northern Michigan 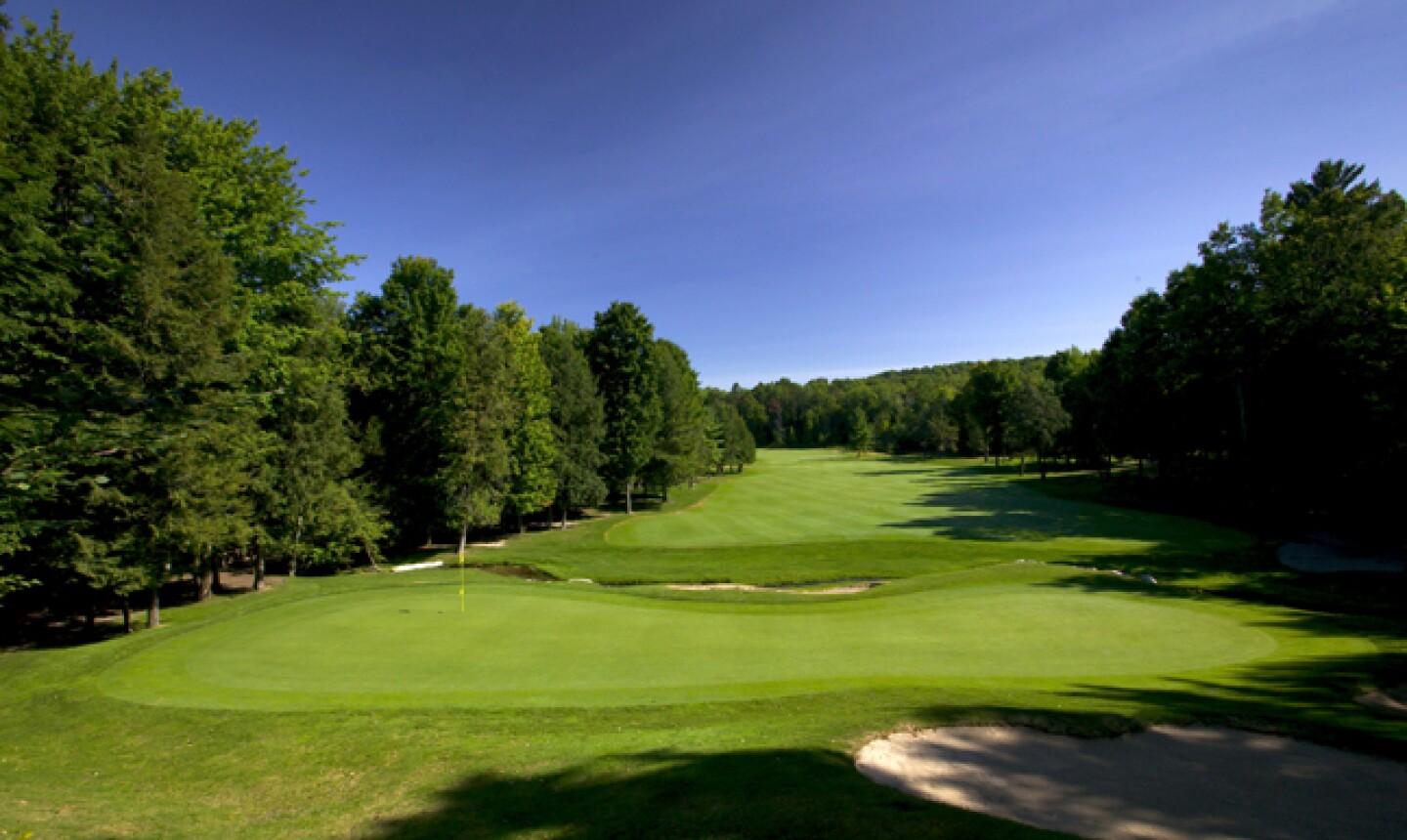 The par-5 seventh hole on The Legend golf course at Shanty Creek has a troublesome creek to negotiate. Courtesy of Brian Walters/Links Imaging 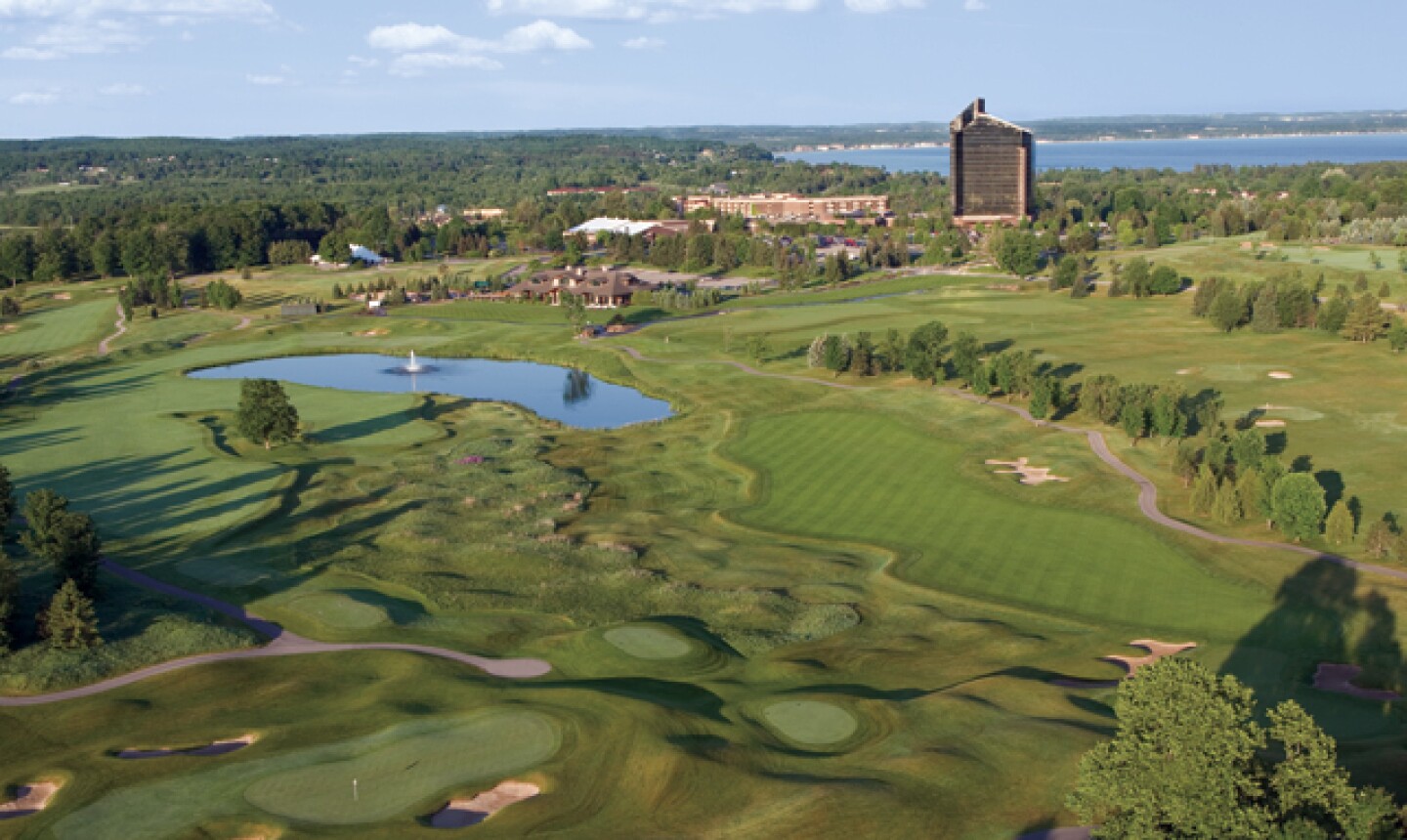 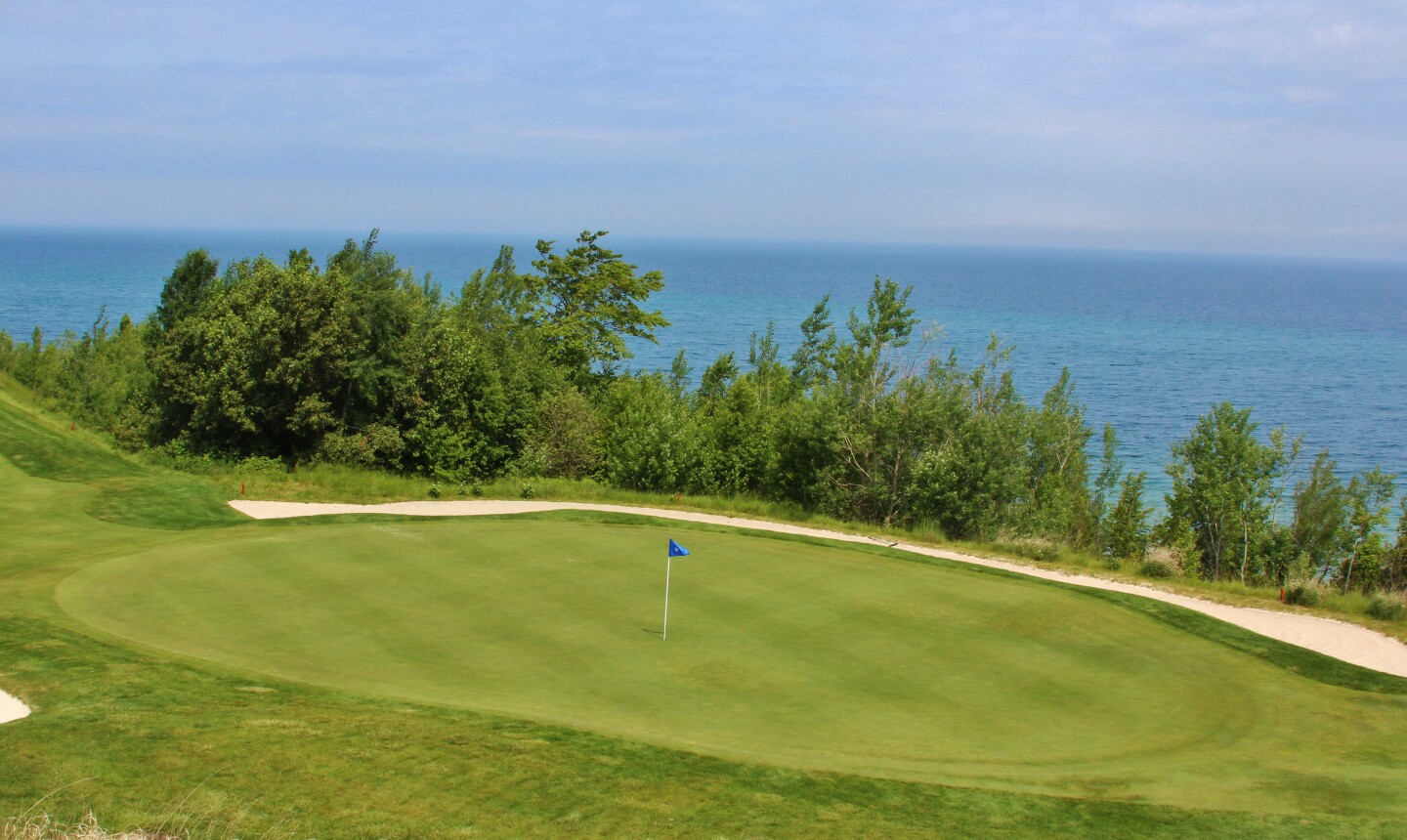 GAYLORD, Mich. -- There aren't many better places in America in July and August than northern Michigan.

Never been? You're not alone. By my own unscientific study, I'd guestimate three-quarters of the golfers I've met haven't even considered northern Michigan for their next summer golf trip, let alone been there.

Did you know Michigan has more five-star courses (three) than any other state, according to Golf Digest's Places to Play ratings? It's time to put this heavenly summer retreat on the bucket list. Here's the ultimate beginner's guide to golf in northern Michigan:

What is northern Michigan?

A vacation in northern Michigan -- generally considered anywhere north of Mount Pleasant in middle of the mitten -- usually involves a cabin on a lake in the woods, the quintessential escape. Tourist towns like Petoskey, Harbor Springs and Charlevoix along Lake Michigan's Little Traverse Bay and Traverse City on Grand Traverse Bay sizzle with festivals and fun all summer long. What started as a ski destination -- thanks to dramatic hills cut by glaciers dating back centuries --gradually transformed into a golf destination. Its signature is elevated tee shots with vistas that stretch for miles across a wilderness of hardwoods and pines.

How to get to the northern Michigan?

The shoulder seasons -- spring from May-June and fall from September-October -- can be iffy in such a northern outpost. The spring can be especially wet and cold, so I'd lean toward booking in the fall. September and the first week of October can yield a bounty of empty, more affordable golf courses surrounded by trees exploding with fall colors. The summer months can be nothing short of perfection with comfortable temperatures in the 70s and 80s and daylight that lasts past 10 p.m.

The golf resorts of the northern Michigan

Wow, where to start. For pure golf, it's the five courses at Treetops Resort in Gaylord. The Otsego Club & Resort (home to The Tribute and The Classic) and The Loon Golf Resort are other Gaylord stalwarts (as are the smaller Benjamin's Beaver Creek Resort and Marsh Ridge Resort).

The empire of Boyne USA Resorts stretches from the 36-hole Boyne Mountain Resort in Boyne Falls to the four-course Boyne Highlands Resort in Harbor Springs and the luxurious Bay Harbor Golf Club in Petoskey (with a 27-hole Arthur Hills course on Lake Michigan) and the recently revamped Crooked Tree Golf Club across the street. Golfers who book Boyne know they're getting quality courses, lodging, meals and off-course entertainment options such as zip-lining.

The Bear anchors the three courses of the excellent Grand Traverse Resort & Spa in Acme. Ringing the outskirts of Traverse City are the 72-hole Shanty Creek Resorts in Bellaire, the 36-hole Crystal Mountain Resort & Spa in Thompsonville and The Homestead, home to a Dave Pelz Scoring Game School and the nearby Manitou Passage Golf Club, designed by Arnold Palmer.

The region's top most coveted courses -- Forest Dunes Golf Club in Roscommon and Arcadia Bluffs Golf Club in Arcadia -- have added lodging within the past five years to up the ante on their experiences. The 36-hole St. Ives Resort in Stanwood and the 54-hole Lakewood Shores Resort in Oscoda boast headliners worth checking out (Tullymore and The Gailes, respectively). A-Ga-Ming Golf Resort in Kewadin and Hawk's Eye Golf Resort in Bellaire both offer 36 holes and condo-style lodging. The 72-hole Garland Lodge & Resort is known as a buddy bonanza in Lewiston.

Courses galore in the northern Michigan

Stand-alone courses have a tougher road to survive in such a competitive, oversaturated market, but there's plenty of good ones. Manitou Passage and the Hidden River Golf & Casting Club in Brutus (now under Boyne control) were gobbled up by resorts during the last recession. That makes the survivors ripe for deals and more remote settings. Black Forest Golf Club, an early effort by Tom Doak, sits six miles from the heart of Gaylord. People love the Little Traverse Bay Golf Club and Restaurant in Harbor Springs for its views of the water.

Black Lake Golf Club in Onaway and Elk Ridge Golf Club in Atlanta are both part of the Gaylord Golf Mecca, but a good half-hour's drive from the Bavarian-themed downtown. They're both worth the effort to find. Belvedere Golf Club in Charlevoix, a classic where Tom Watson played during his summer vacations in northern Michigan as a boy, has hosted more Michigan Amateurs than other course in the state. Dunmaglas Golf Club in Charlevoix and Red Hawk Golf Club in East Tawas would be popular four-star courses in most other destinations.

People don't realize how vast northern Michigan can feel when they're driving back roads to find their next course. For the best experience, pick a region and stay within it. There are three essential golf hotbeds: Traverse City, Gaylord and the Sunrise side. A Gaylord stop should include at least three rounds at Treetops, The Tribute and Black Forest or The Loon.

Traverse City is a bit more complicated. All four resorts -- Grand Traverse, Shanty Creek, Crystal Mountain and Homestead -- are special in their own way. For golf, play The Legend and Cedar River at Shanty Creek, the Bear at Grand Traverse, Manitou Passage at The Homestead or Mountain Ridge at Crystal Mountain and take the long drive to nab Arcadia Bluffs.

There aren't as many tourist hotspots or swanky resorts on the Sunrise (east) side along U.S. 23, although the golf scene is strong. Tees times at Red Hawk, The Gailes, Forest Dunes, Black Lake, The Monarch at Garland and Elk Ridge will suffice.

If you've only got one shot at northern Michigan and want to check off the "top 100" types, it will require some serious driving. The reward is an incredible variety of architectural styles and terrains. Arcadia Bluffs, which rides the dunes of Lake Michigan, might be the only true links course east of Bandon Dunes. The Quarry and Links nines of Bay Harbor are as scenic as any course in the country not on an ocean. Forest Dunes, maybe Tom Weiskopf's best work, feels more like Pinehurst with its mix of sandy and wooded holes. Shanty Creek's The Legend by Palmer is just a pure joy to play. Any golfer who thinks they're a stick must tackle The Bear by Jack Nicklaus, one of Michigan's toughest tracks.

Treetops still holds clout nationally, so spend at least a day there, playing The Signature by Rick Smith with an afternoon round on Threetops, a cool nine-hole par-3 course that hosted a televised shootout with some of the legends of the game (Nicklaus, Phil Mickelson, Ray Floyd, etc). Golfers won't become an instant millionaire for getting an ace on Threetops like Lee Trevino did in 2001, but they'll still feel like a million bucks after this star-studded itinerary. 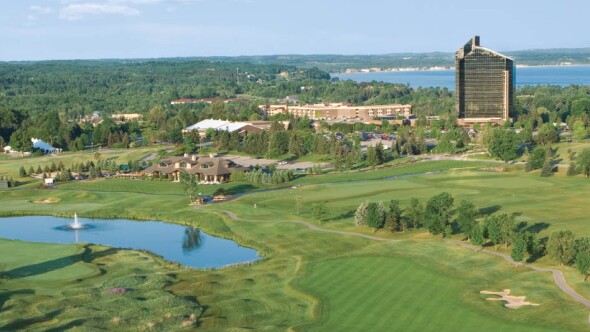 Articles
3 Min Read
Gambling and golf: Get lucky in Michigan's casino hotspots
A decade after the largest golf boom any state has ever experienced, Michigan witnessed similar explosive growth in the number of casinos from 2007-09. Playing golf by day, and gaming by night. We'll bet you'll have a good time. Jason Scott Deegan offers up Michigan's five best golf-and-gambling destinations. 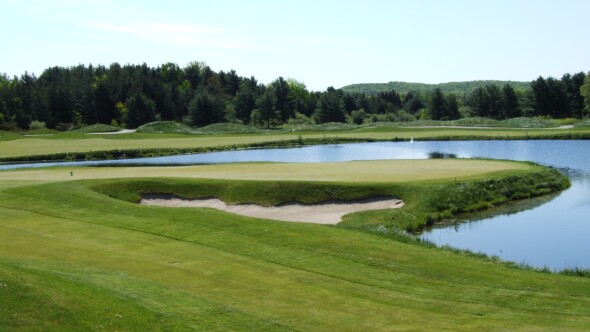 Articles
2 Min Read
Guide to great Michigan golf on a budget in Traverse City
Jason Scott Deegan found out what kind of three-day golf vacation can be had for $200 in northern Michigan's hotbed of Traverse City. 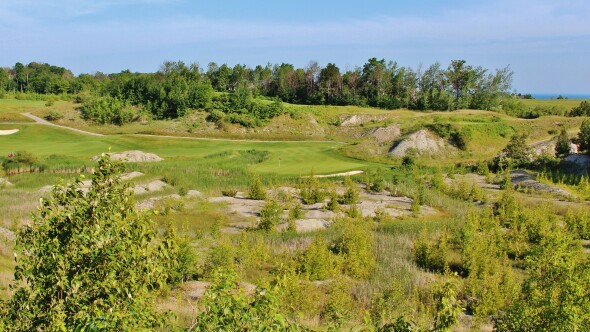 Articles
3 Min Read
By Design: Big-name golf architects leave lasting legacies in northern Michigan
Other than missing a handful of big-timers, northern Michigan features a list of golf course designers as good as any destination in the country. All the usual suspects who dominate top 100 lists are well represented. But what are the best of the best? Jason Scott Deegan offers up northern Michigan's 10 best "designer" golf courses. 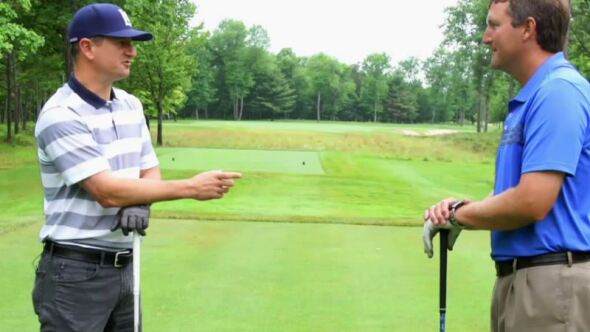 Kira K. Dixon
Lifestyle Correspondent
Now Reading
A beginner's guide to golf in northern Michigan
New Cookie Policy
WE AND OUR PARTNERS USE COOKIES ON THIS SITE TO IMPROVE OUR SERVICE, PERFORM ANALYTICS, PERSONALIZE ADVERTISING, MEASURE ADVERTISING PERFORMANCE, AND REMEMBER WEBSITE PREFERENCES. BY USING THE SITE, YOU CONSENT TO THESE COOKIES. FOR MORE INFORMATION ON COOKIES INCLUDING HOW TO MANAGE YOUR CONSENT VISIT OUR COOKIE POLICY.
CONTINUE
Search Near Me