A guide to overseeding: What, where and why

Golf courses in California's Coachella Valley and Phoenix-Scottsdale are hotbeds of overseeding, but it's a common, and sometimes controversial, practice throughout the southern United States.

It's overseeding season, a busy time for superintendents and a frustrating one for golfers.

It comes every fall for much of the southern half of the United States, but its impact varies greatly from region to region, destination to destination.

To everyday golfers, especially those in northern states, overseeding is a mysterious, maybe even confusing, process. Every year, GolfPass gets reviews from golfers who visit southern states and think the grass is "dead" when they see a green fairway overseeded with Rye grass framed by brown rough of dormant Bermuda. Explaining the overseeding process should help more golfers understand why it's so popular in certain parts of the country and why it is falling out of favor in others.

Golf course overseeding: What you need to know 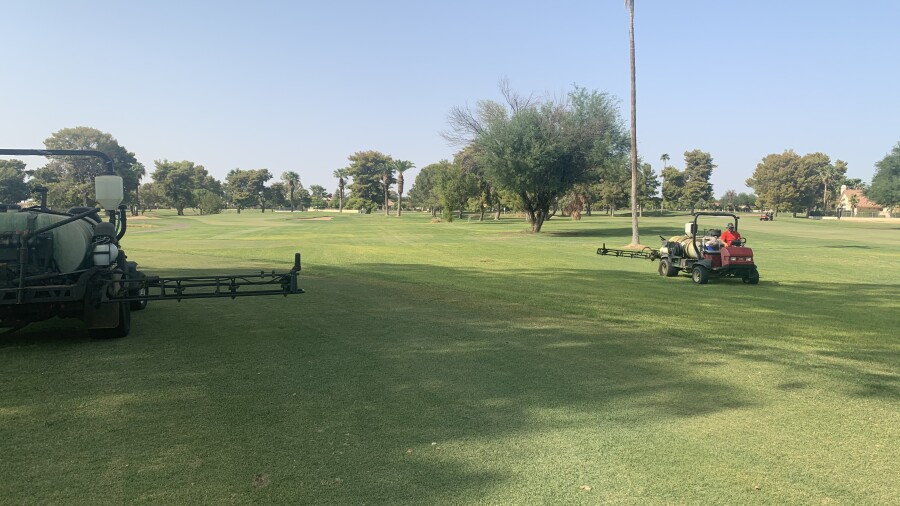 The maintenance staff sprays out chemicals to slow the growth of the Bermuda grass during the fall overseeding at Wigwam. Courtesy photo 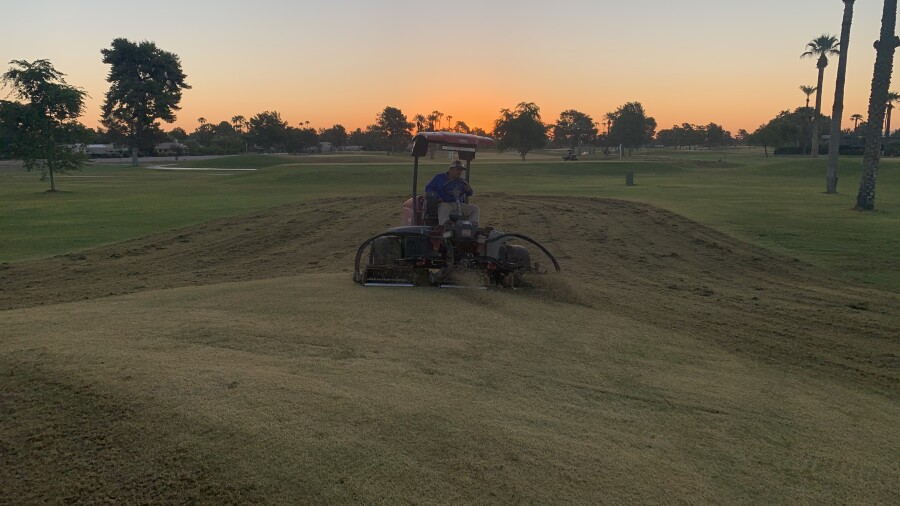 Verticutting is part of the scalping process of the Bermuda turf during the fall overseeding at Wigwam. Courtesy photo 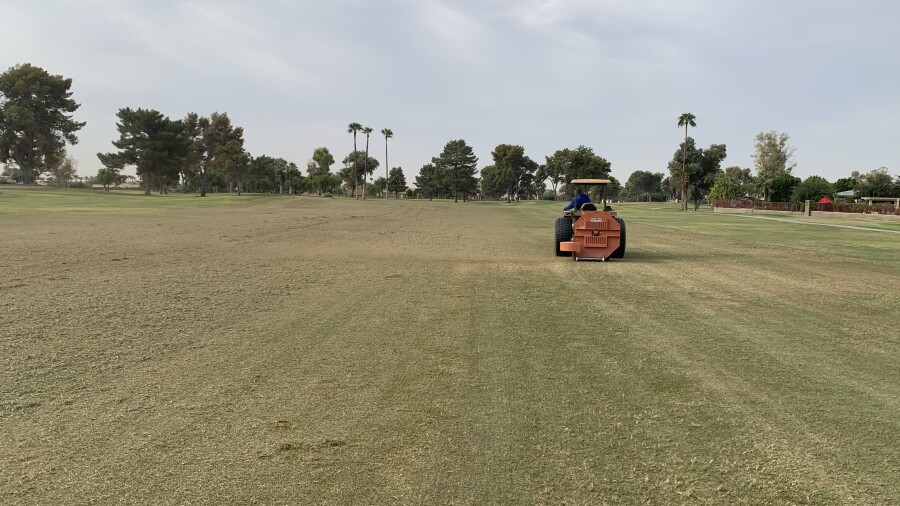 The verticut clippings are blown aside during the Wigwam overseeding. Courtesy photo 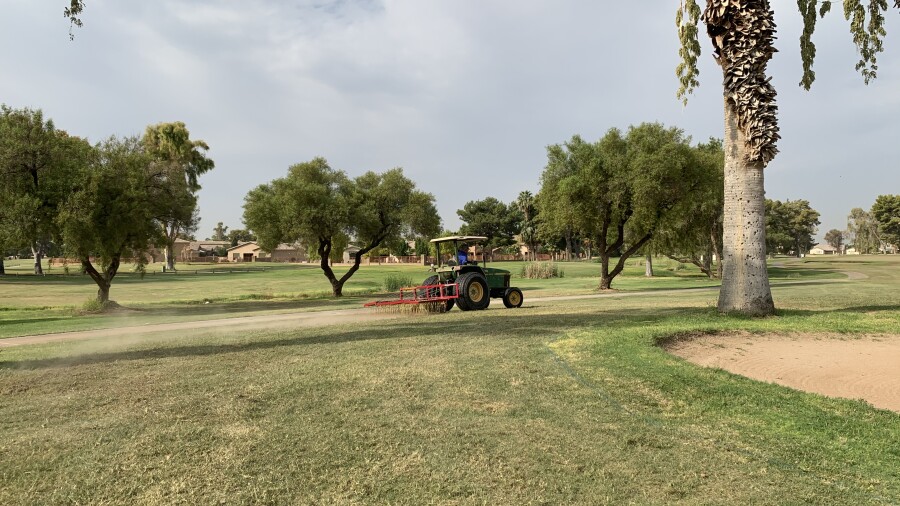 A staffer uses a spring rake to clear out the Bermuda rough during the Wigwam's fall overseeding.
Courtesy photo 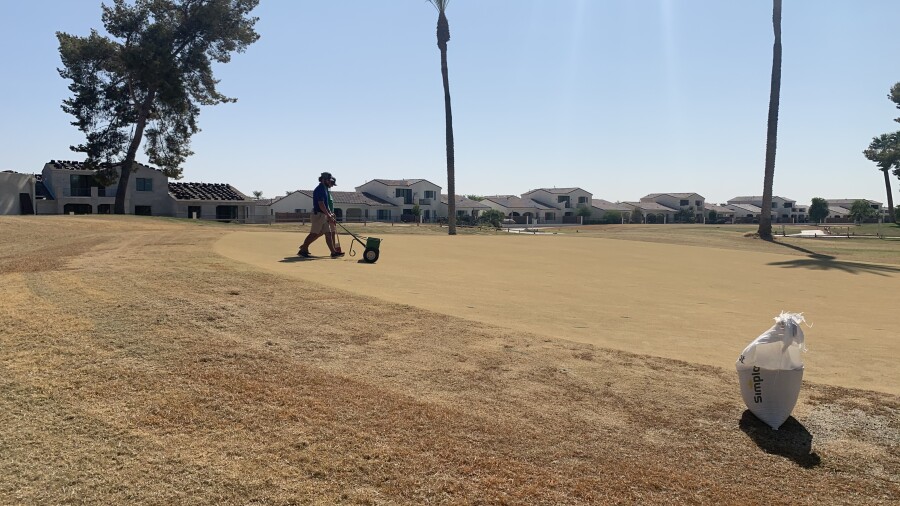 Seeding the greens with Rye grass during the Wigwam fall overseeding. Courtesy photo 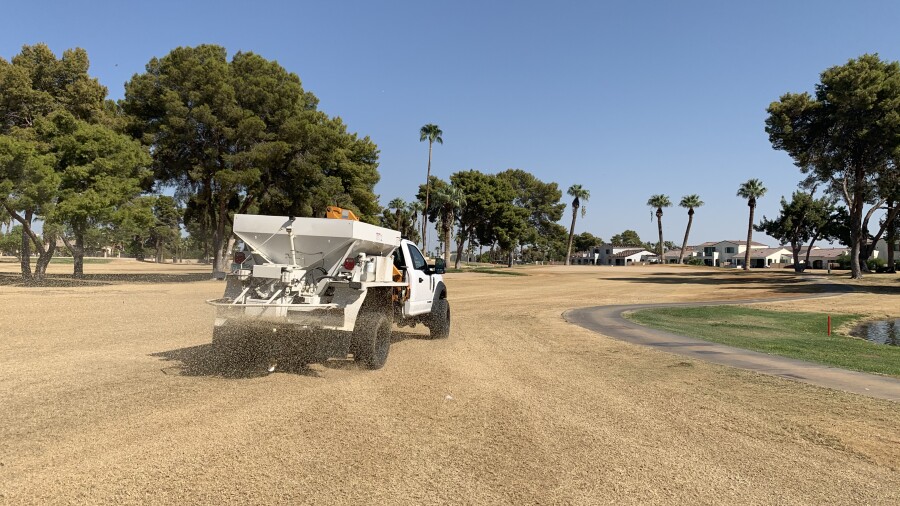 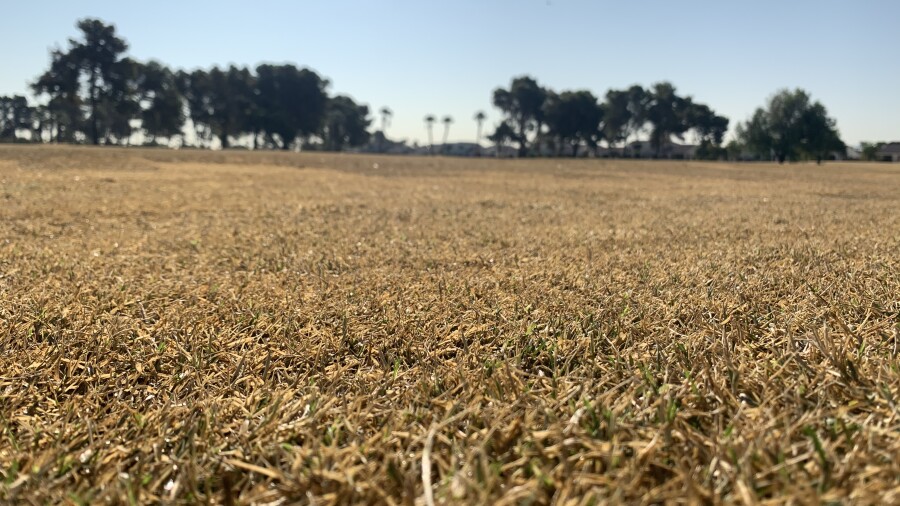 The first day of watering gives the Rye grass turf some life during the Wigwam's fall overseeding. Courtesy photo 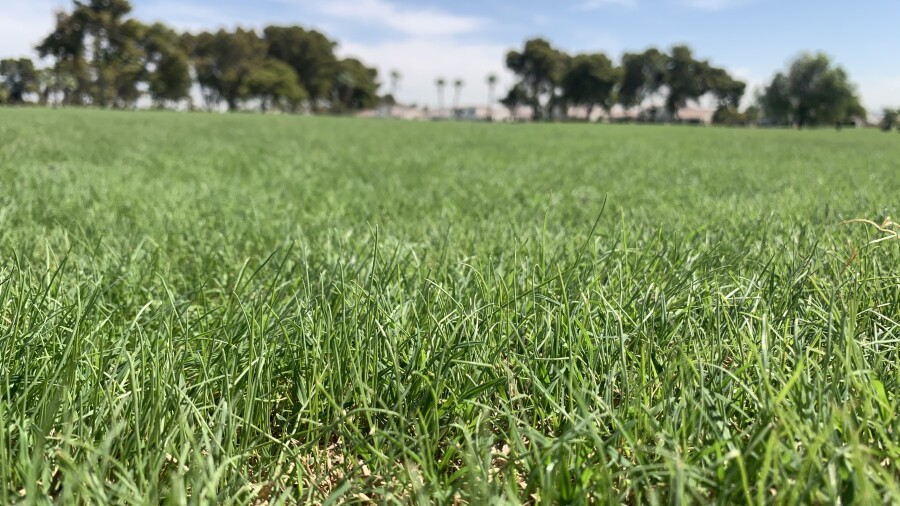 By the 10th day of watering during the Wigwam's fall overseeding, the Rye grass has turned green and looks more ready for play. Courtesy photo

To grasp why courses overseed, golfers must first understand a climate's impact on grass.

Bermuda is the grass of choice in most southern states because it can tolerate heat. It struggles, though, in winter's colder temperatures, turning brown as it goes dormant. It can die if it gets too cold or there's a long-standing deep freeze.

Golf courses located in northern frost zones in the Midwest and East Coast or even at elevation in the southwest, say in New Mexico or the northern end of Scottsdale, don't need to overseed. They're covered in cool season grasses like bent grass already.

But in southern states, golf course managers and operators use the practice of overseeding to keep conditions green during their fall and winter high seasons, mainly to cater to traveling golfers but also members who expect emerald turf when the weather is ideal. In most cases, this means replacing the warm-season Bermuda grass with Rye grass, a cool-season strain.

This transition, every fall and spring, isn't easy or cheap, especially if a course decides to go "wall to wall", meaning overseeding every part of the course: fairways, tees, greens and even rough.

In the early fall, often after the course closes for several weeks, the maintenance staff will scalp off the Bermuda grass, followed by a heavy seeding of rye. To germinate, the Rye will need to be heavily and repeatedly watered and fertilized. During the early stages of this growth period, the turf is weak, which is why many courses go cart-path-only for the first several weeks after the original application.

Conditions can be spotty and deter golfers for a month or so after the course reopens, but the end result by the time high season comes around in January is the reward: a pristine course where golfers, locals and tourists alike, will pay top dollar to play on green fairways. You can follow the overseeding process taking place this fall at Wigwam Golf Club in Litchfield Park, Ariz., in the photo gallery above.

The transition back to Bermuda happens in late spring once the snowbirds have left in March and April with summer heat just around the corner.

Should golf courses overseed their turf?

The overseeding process has become somewhat controversial over the past decade or so. Chris Hartwiger, the director of the United States Golf Association's Green Section's Course Consulting Service, said the 2009 recession and the golf industry's push toward more sustainability somewhere around 2013-14 forced many golf club leaders to take a hard look at the practice. Many courses in the Carolinas either stopped overseeding altogether or scaled back. Pinehurst Resort no longer overseeds its nine courses. Only a handful of courses in Myrtle Beach overseed "wall to wall" anymore, although many do partial overseeding.

Critics say overseeding is bad for the environment, considering how much extra water, fertilizer and machine power is required.

For golfers in Arizona, overseeding is just a fact of life. The Arizona Golf Association puts out a popular overseeding guide, so golfers know which courses are open or closed.

Brian Whitlark, a senior consulting agronomist with the USGA, estimates that at least 95 percent of courses in southern Arizona (from Scottsdale to Tucson) and California's Coachella Valley (from Palm Springs to LaQuinta) overseed.

Las Vegas, another popular golf destination, gets much colder at night in winter than those warmer climates. Many Las Vegas courses overseed, despite the rising cost of water that has become a major deterrent. Courses like Bali Hai that have moved away from the practice tend to rely on paints to stay green instead.

The question - "should we overseed or not?" - occurs regularly in Texas, Georgia and Florida. It is an individual choice. Golfers in these locales tend to face much smaller inconveniences, perhaps with only minimal overseeding. Courses often don't close during minor overseeding projects.

John Daniels, another USGA agronimist who used to be based out of Dallas, said most courses in the state of Texas don’t extensively overseed. He estimates that only two percent go "wall to wall" and roughly 30 percent do partial overseeding, mostly in high traffic areas like tees and the range. "The exception (that are part of the two percent) is the courses that host televised tournaments," he said, mentioning Austin Country Club (host of the World Golf Championships-Dell Technologies Match Play) and TPC San Antonio (host of PGA Tour's Valero Texas Open on the Oaks Course).

The future of overseeding

The winds of change could be shifting against overseeding. The rising cost of the water in the Southwest and West Coast and seed could eventually become too much of a financial burden for many clubs to bear.

Shipping issues caused by the COVID-19 pandemic have doubled the cost of seed this year. Daniels recently talked to an Arizona-based superintendent who estimated his overseed costs will be $4,175 per acre. Using that number, the cost to overseed the average golf course of 150 acres would be roughly $625,000.

Hartwiger said he's heard "horror stories" of clubs that may not be able to overseed this season due to shipping delays or the cost of seed.

In searching for a long-term solution, the USGA is helping to fund research at five different universities - California-Riverside, Texas A&M, Florida, Georgia and Kansas State - to create a warm-season grass that stays green year-round and still handles cooler temperatures. “It would be so great to have a grass stay green and grow year round," Whitlark said.

For Whitlark, it comes down to pitting the aesthetics of a green golf course against more natural playing conditions. He prefers playing courses that don't overseed, a stance many golfers probably aren't ready to embrace.

"Arguably the playablity of the courses that don’t overseed is better than the overseed," he said. "You get a firmer, faster golf course. In my opinion, I think it plays even better than an overseeded course. When it comes to color and aesthetics, people generally navigate to the overseeded course. For others looking for a more pure experience, where it (the ball) rolls, and for a more environmentally friendly experience, I’d argue for the course that isn't overseeded."

The biggest concern that I see in the future is the availability of water in the SW States.

I understand the motivations to stop over-seeding, but the courses will have many unhappy customers if they are forced to play dormant bermuda rough that is 3-4 inches deep. That stuff is nasty and after it's been beat up by golf traffic it can be almost unplayable. I experienced this recently at Kapalua Plantation, and after paying the premium price to play the course, it was very disappointing to have to deal with the dormant bermuda. For $400 a golfer wants to have a good experience with good course conditions. What I experienced at Kapalua was neither, and I have run into the same situation at other courses with thick dormant bermuda.

I agree with those who would choose not to overseed. My course closes for almost a month for overseed and then another 3 weeks of cart path only. Because of a disability I can't play then either. So overseeding costs me almost two months of golf. In our area the Bermuda doesn't die, but it does go dormant. It is still very playable. I don't need the anesthetics. I'd rather play golf.

Tim Gavrich
Senior Writer
Now Reading
A guide to overseeding: What, where and why
Search Near Me