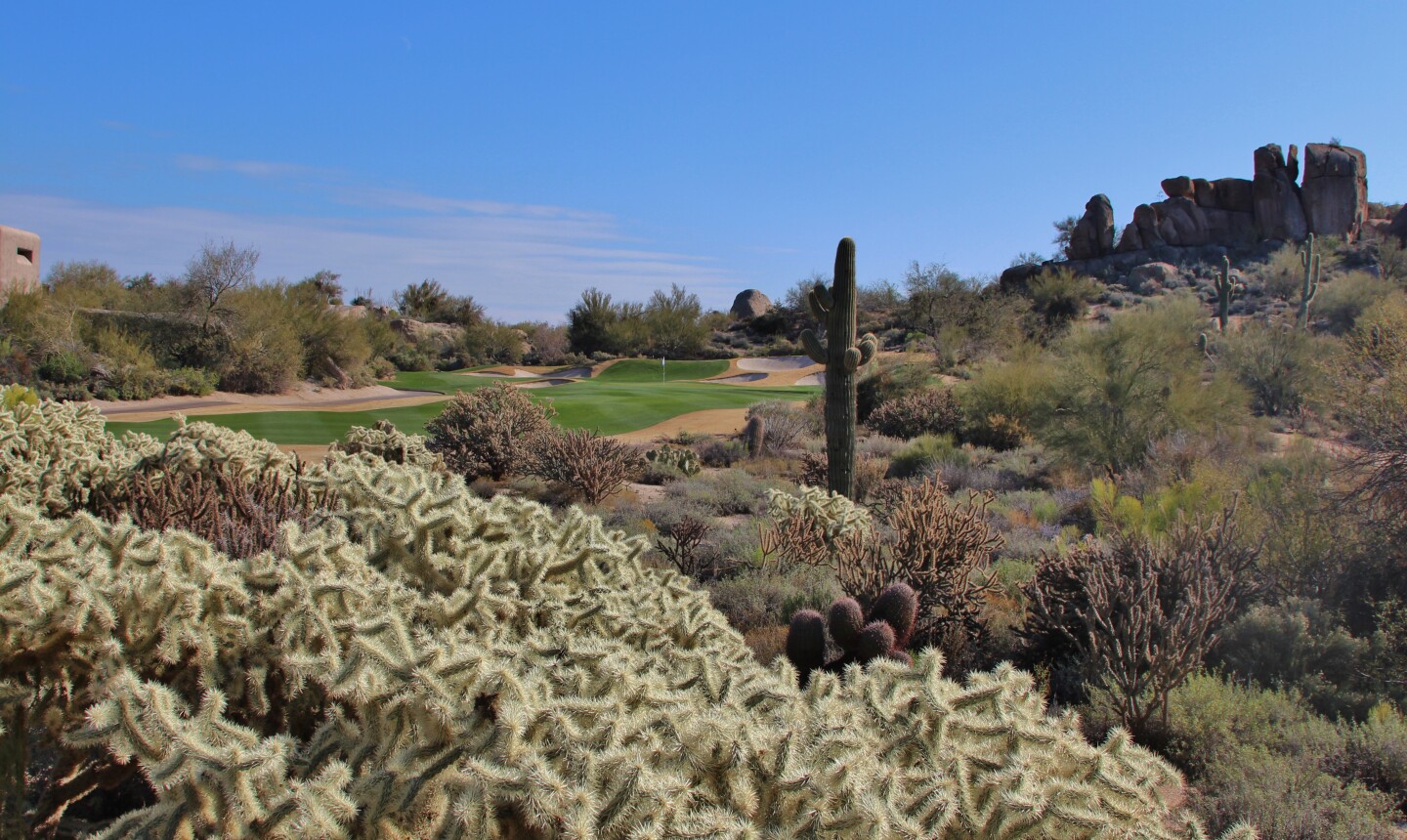 Scorecard be damned! If you're playing winter golf in the Scottsdale area, you're winning. Jason Scott Deegan/Golf Advisor 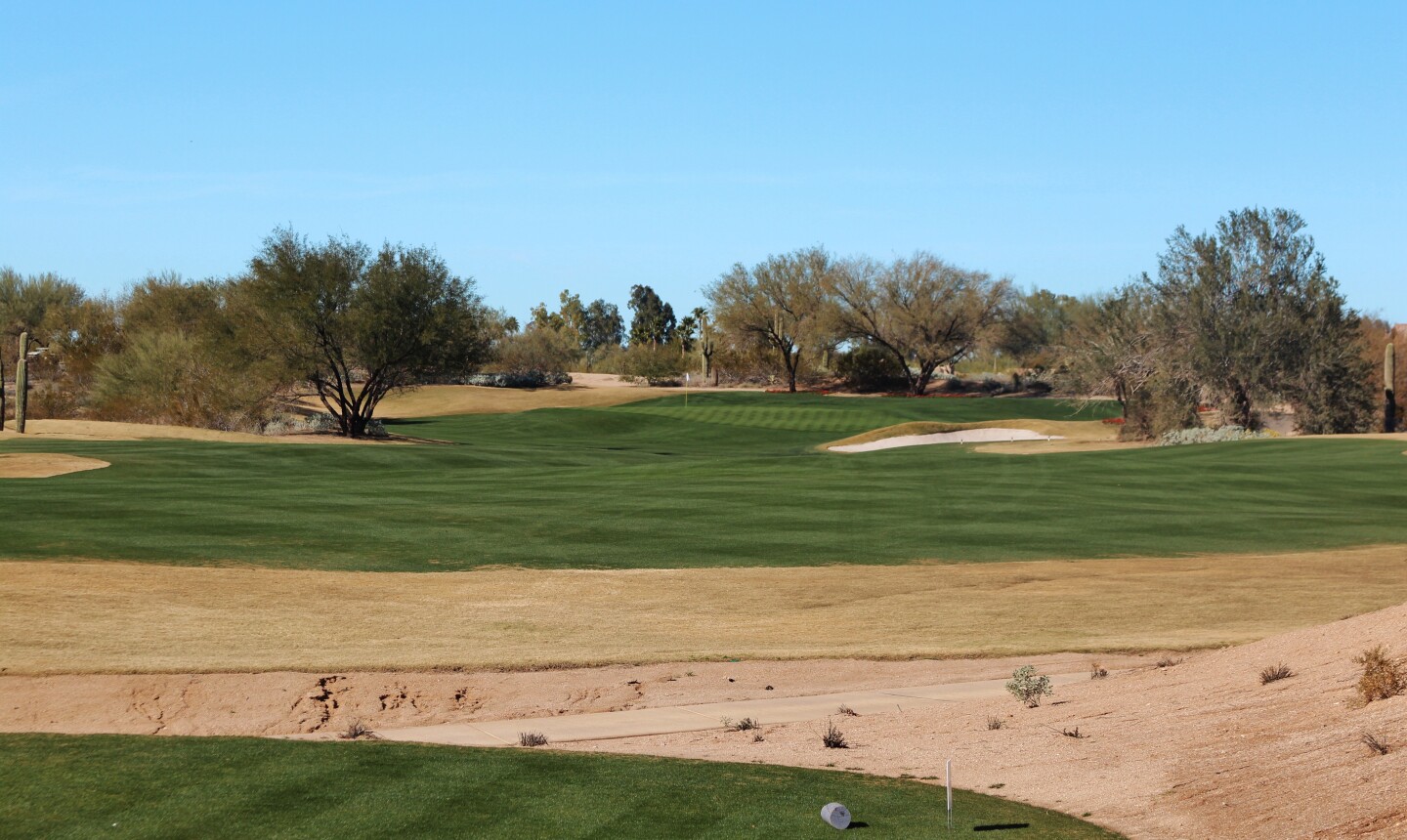 The new 17th on the Raptor Course at Grayhawk Golf Club, a 331-yard par 4, is more than 100 yards shorter than the hole it replaced. Jason Scott Deegan/Golf Advisor The par-5 eighth hole on the Cholla Course at We-Ko-Pa Golf Club will be tweaked during a renovation in summer 2016. Jason Scott Deegan/Golf Advisor

SCOTTSDALE, Ariz. -- The idea of a playing in a winter golf tournament might not sound like a good idea for snowbirds trying to shake the winter rust.

I'm here to convince you otherwise. I may not live in a snowy climate in California's Bay Area, but my preparation for the 2016 Scottsdale Open was very similar to golfers who do. I hadn't touched a club in more than a month. I hadn't swung my own clubs in more than two.

I'm a big believer that having "no expectations" is good for one's golf game. No pressure equals more fun. And that's exactly what Scottsdale delivers.

My partner (a sun-starved Canadian) and I finished a respectable fourth in the Open Net division at the 2016 Scottsdale Open after competitive rounds on the South Course at The Boulders Resort & Spa, the Cholla Course at We-Ko-Pa Golf Club and the Raptor Course at Grayhawk Golf Club.

The first two days at the event (www.scottsdaleopengolf.com) are a two-man best ball, followed by a "count them all" final round. The tournament usually visits the Stadium Course at TPC Scottsdale, allowing players to experience playing the par-3 16th green with the surrounding stadium still in place, but the dates didn't work this year.

Thank goodness we didn't play a PGA Tour venue. Our scores would have been shredded even more than they already were. My partner and I both felt like we under-performed the entire tournament. Guess what? Everybody else probably thought the same. Visiting Scottsdale isn't about how you play. It's about getting to play when other golfers can't.

Forget Florida. The Arizona desert is Ground Zero for the best winter golf in America. Green fees are high, but can you really put a price on your sunny state of mind when it's 70 degrees outside?

Life at The Boulders is pretty special. The resort, located in Carefree, Ariz., about 45 minutes north of the Phoenix airport, is finishing up a multi-million-dollar effort to redecorate its main lodge and fantastic adobe-style casitas with new furnishings and other little touches.

Outside, it took Mother Nature millions of years to shape the massive boulders and stunning Sonoran Desert landscape that come to life on the two golf courses, both designed by Jay Morrish.

The South, the more scenic and challenging of the two, basically throttled my team in round one. It's tight in spots with a few desert carries thrown in for good measure. It's a rare Phoenix-area course with bentgrass greens. The grass can survive because it's generally at least 5 degrees cooler in Carefree than the rest of the "Valley of the Sun."

Thankfully, that afternoon set me straight. A treatment at the resort's excellent spa loosened up my back and hips, a precursor to better golf. The treatment was indicative of how pampered you feel staying at The Boulders.

Golfers can't visit Carefree -- or Scottsdale for that matter -- without checking out Cave Creek, an authentic Old West town. Rodeo lovers come to watch live bull riding. We didn't get the chance, but the meal at Bryan's Black Mountain Barbecue was certainly worth the trip.

I've yet to meet a golfer with a bad thing to say about We-Ko-Pa Golf Club, home to arguably two of the top five public golf courses in Scottsdale. I've only played the Cholla, the original course, designed by Scott Miller. My familiarity was probably why our team scored better. It's one of my desert favorites -- wide fairways, lots of angles, two drivable par 4s, tons of scenery with no homes in sight. The course was in perfect shape, too.

The Cholla is scheduled to close later this year for an off-season renovation to upgrade its irrigation infrastructure and put new Bermuda grass on the greens. PGA General Manager Matt Barr said the tricky par-5 eighth hole will see some changes near the green, although nothing is set yet.

The rebranded We-Ko-Pa Resort & Conference Center across the street -- it used to be a Radisson -- has transitioned nicely into a more luxurious AAA Four Diamond option for golfers. There's already the nearby Fort McDowell Casino, the Amethyst Spa and talk of further upgrades, like an outdoor lazy river for families with children. The Ahnala Mesquite Room serves good food all hours of the day. My dinner, consisting of a sampling of appetizers, short ribs and cheesecake, was just as tasty as the pink sunset was spectacular on our Pink Jeep Tour.

These tours are popular in Sedona and fairly new to Scottsdale. They are a fun, informative way to explore deep into the desert -- something not recommended on the golf course.

I have always loved Grayhawk for many reasons ... Phil's Grill; The music pumping on the range; The Talon and Raptor golf courses. Playing all 36 holes at Grayhawk was one of my first golf assignments ever, way back in 1999. I've got a history with the place.

That's what made it so disappointing to see the changes made to the back nine, making way for future development. The new 15th, 16th and 17th holes -- which made a debut last October -- aren't horrible, but the last two don't seem up to the standards of the rest of the course. The par-4 15th is solid. No. 16 seems particularly bland, and the drivable 17th could have been so much more.

After the round, the food and drinking served in the Fairway House adjacent to the main clubhouse reaffirmed my belief that Grayhawk is still a first-class venue worthy of your money.

The same goes for the Scottsdale Open. You might hit it crooked into a saguaro all day long, but at least you're hitting it. Anybody playing golf in January in Scottsdale is winning in life, even if they aren't on the leaderboard.

By Tim Gavrich
Read More
Load More
Popular
Secrets from the world of Golf Travel: November 2021
5 amazing items up for grabs at Youth on Course's annual charity golf auction
Playing hooky is a Cool Golf Thing
It takes a village to build – and celebrate – a great golf course
Editorial Staff