Bahamas Breeze: The golf life is good at The Abaco Club and Sandals Emerald Bay 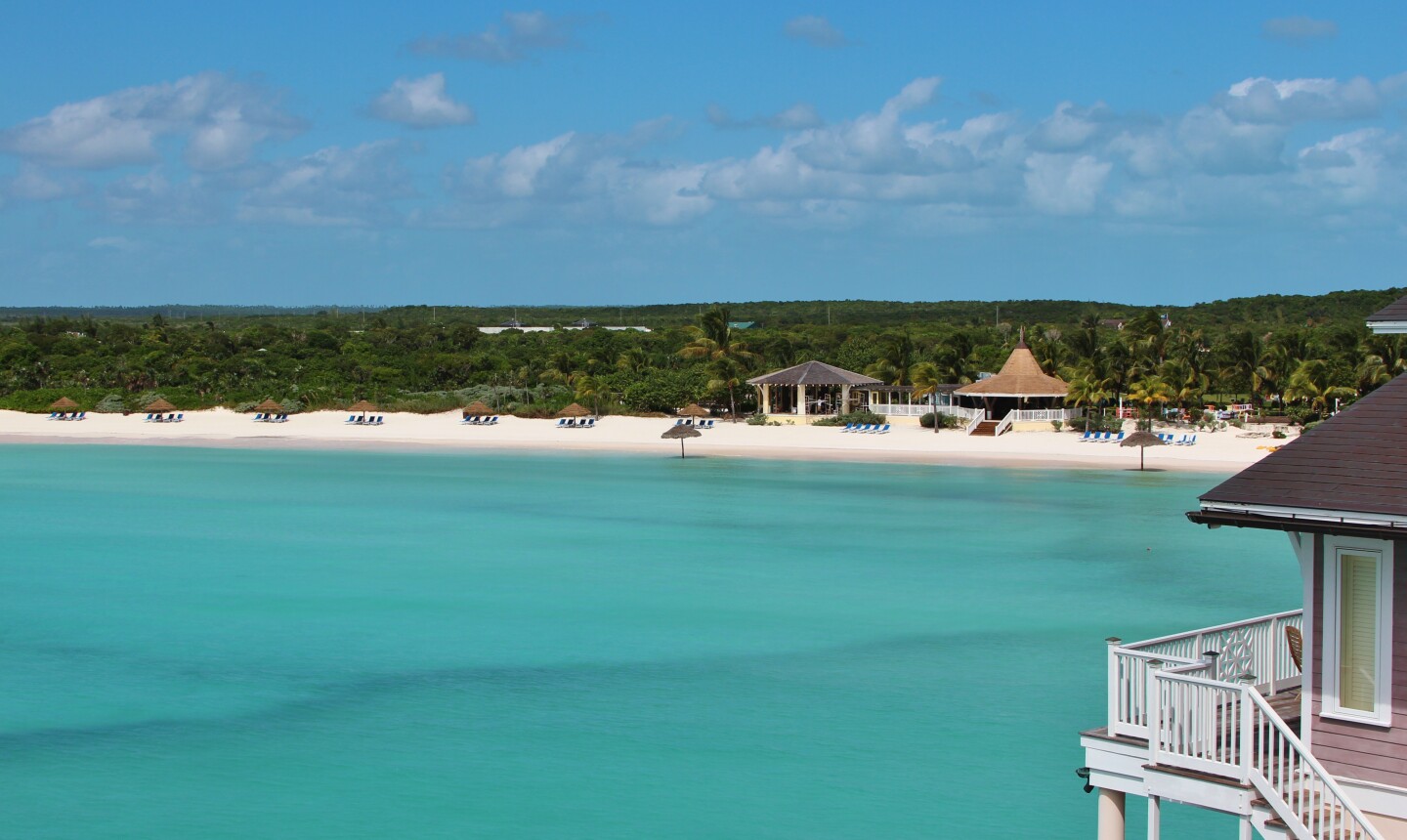 The beautiful beach on Winding Bay is the centerpiece of The Abaco Club in the Bahamas. Jason Scott Deegan/Golf Advisor 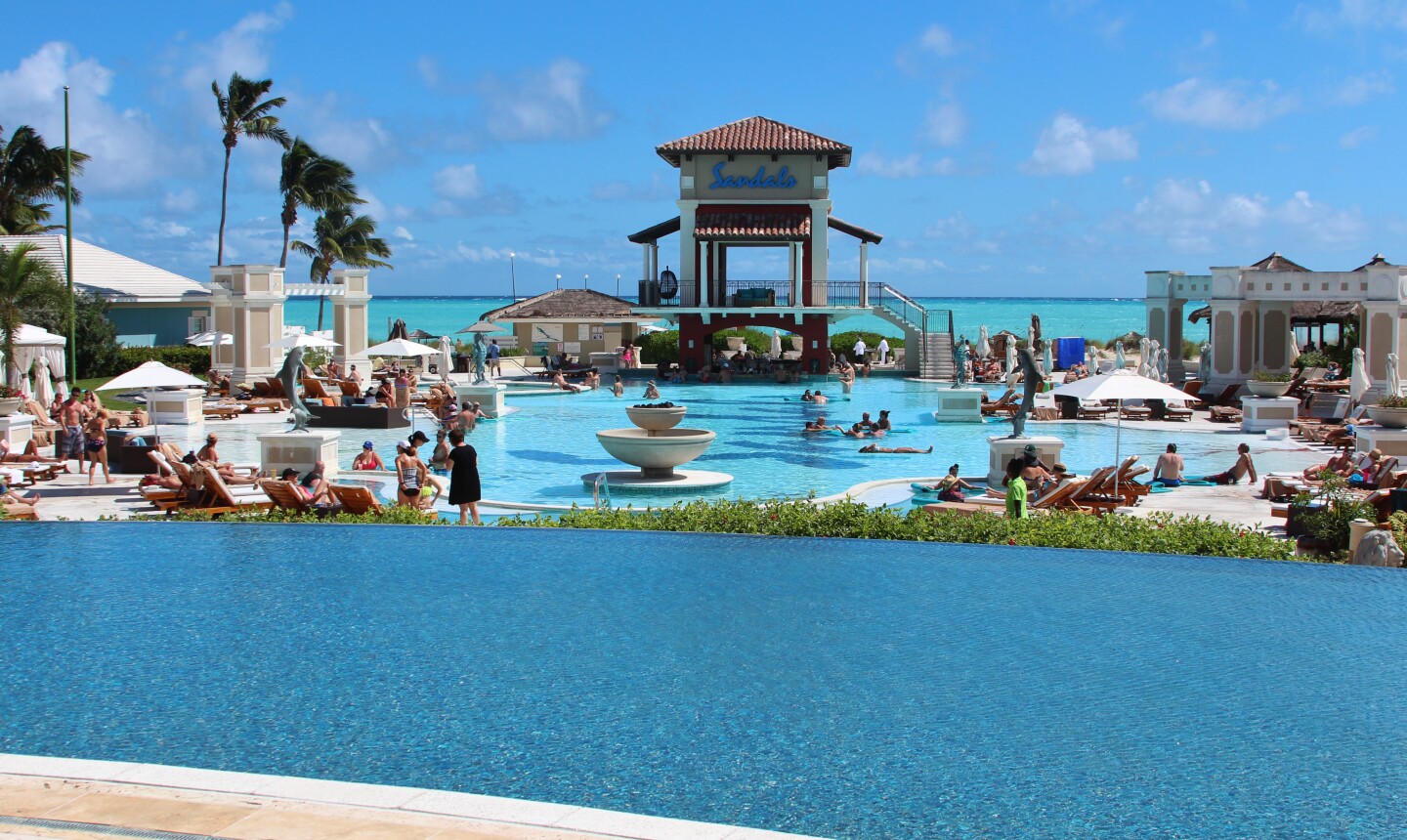 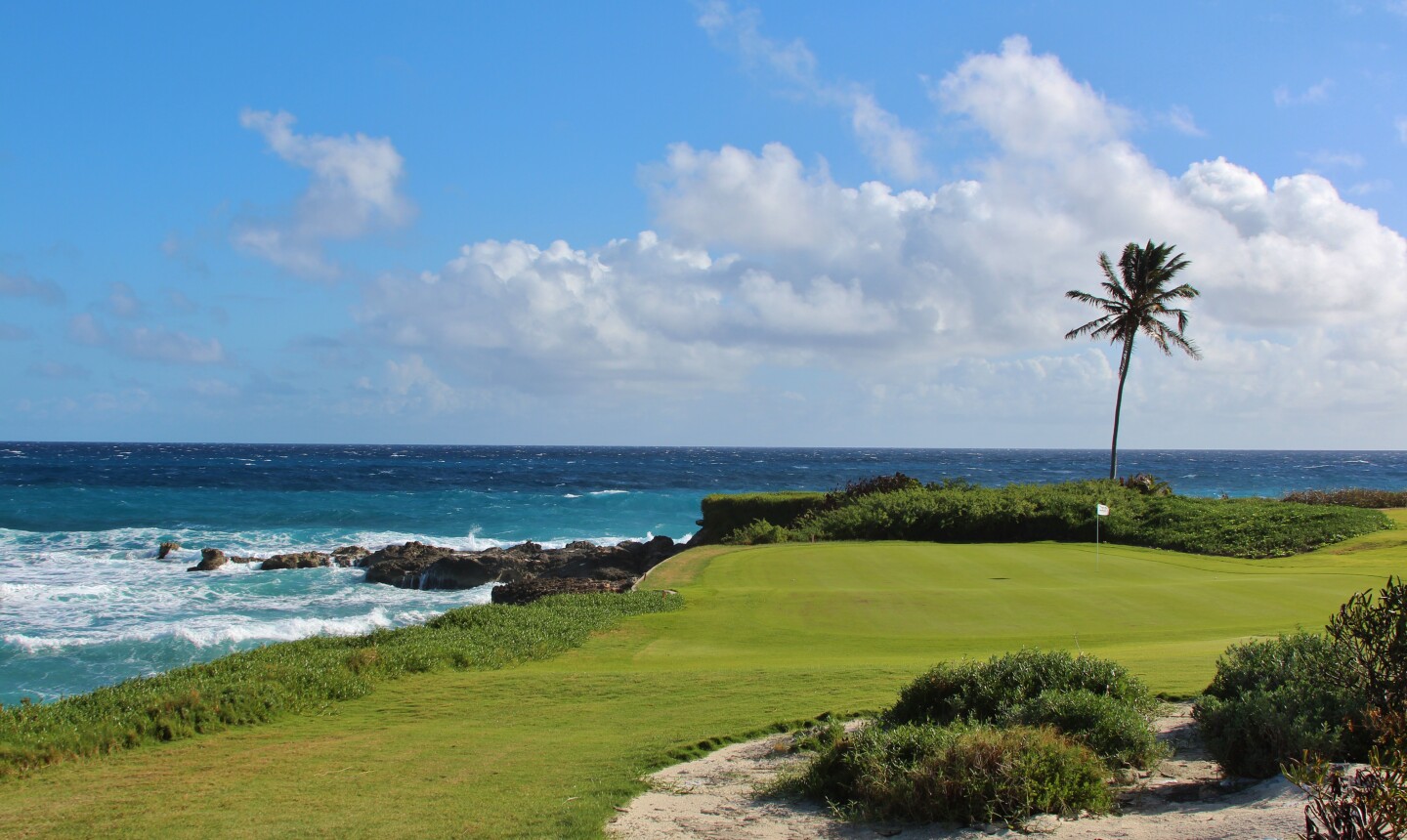 The 13th hole on the Sandals Emerald Reef Golf Club is a short-but-sweet par 3 of 122 yards. Jason Scott Deegan/Golf Advisor ABACO, Bahamas -- I was zoned out.

Relaxation mode had kicked while I was hangin' in Buster's Beach Bar at The Abaco Club. The breeze was blowing gently off of Winding Bay through the open-air thatch hut. The view of the beach and bay looked like a postcard from paradise. The water, a shade of turquoise cleaner than a swimming pool, was so clear that I could see two shadows in the water. Two eagle rays floated by without a care in the world. Visitors to The Abaco Club tend to feel the same way.

The Bahamas are the Hawaii of the East Coast. Both tropical island destinations are wonderful but pricey. There are more than 700 islands and cays in the Bahamas, although golfers probably only need to know three or four. During a recent five-day adventure, I hopped islands to discover spectacular seaside courses at The Abaco Club on Abaco and the Sandals Emerald Reef Golf Club at Sandals Emerald Bay on Great Exuma, two magnificent properties formerly associated with Ritz-Carlton and Four Seasons. Both began hosting Web.com Tour events in 2017, raising their profiles even further.

Playing the two premier tournament hosts in the Bahamas, however, will have to wait for a return trip. To see those two courses, I'll have to watch on TV like everybody else. The Ocean Club golf course on Nassau Paradise Island holds the Pure Silk Bahamas LPGA Classic every end of January/early February. In 2015, the Hero World Challenge migrated from Isleworth Golf & Country Club in Florida to the Albany golf course, a luxury community on the island of New Providence. The Hero World Challenge, co-sponsored by the PGA Tour to benefit the Tiger Woods Foundation and Tavistock Foundation, is televised annually by The Golf Channel and NBC, featuring 18 top players competing for a multi-million dollar purse.

High-definition screens always make the Bahamas look good, but it's nothing compared to being here, standing on a green with the wind blowing and the salt spray from the sea licking sun-drenched skin. A winter escape -- think flip-flops and golf clubs -- comes highly recommended.

If you want to drop off the grid, Abaco, a narrow island northeast of Miami, is a prime place. There's little civilization between the secluded cove of Winding Bay, home to The Abaco Club, and the airport in the tiny village of Marsh Harbour.

New owner Southworth Development bought The Abaco Club from Marriott in December 2014, another high-profile golf club and/or real estate community acquired by the Massachusetts-based company since 2008. Technically, The Abaco Club (formerly managed by Ritz-Carlton) is a 483-acre private playground for property owners and members. Southworth does allow guests to visit up to three times before purchasing anything. The real estate offerings range from $375,000 for a cute one-bed golf cabana like the one I stayed in near the first fairway and two- to four-bedroom custom cottages to $3.5 million beachfront estate lots. Most of the cottages on the cliff overlooking the bay are available in the rental pool. Memberships cost between $10,000 (for an international non-resident) to $100,000.

Southworth has spent millions of dollars to modernize the entire club. During my 2015 stay almost every building -- the Welcome Center, Cliff House restaurant, the indoor portion of Buster's and the tiny pro shop -- was under construction to prepare for the upcoming high season starting in December. Thankfully, the three most important components of survival were up and running during my stay -- drinks and incredible food at Buster's, massages at the cozy spa on the cliff and the Abaco Club golf course, a "tropical links" by Englishman Donald Steel and Tom MacKenzie.

After years of neglect, conditioning of the 7,123-yard course is back up to snuff. All of the bunkers have been lined with new grass for more consistency. Several new ladies tees have been added for playability. Member Darren Clarke, the 2016 European Ryder Cup captain and 2011 Open Champion, has recommended small changes -- a bunker here or there -- that are under consideration.

The routing is almost flawless, otherwise. Six of the first seven holes play downwind along the bay, allowing players to warm up for the meatier challenges coming home. The par-3 fourth hole introduces the bay views. The par-4 fifth hole throws the beach in your face. It's one of the best drivable par 4s I've come across in all my travels. Players can either take on the long carry over the sand for a shot at eagle or bail out right for a short approach to a wild green. I chickened out twice off the tee and still made par each time.

The back nine gets even better. Par 4s at no. 15 and no. 16 play around an old rock quarry. The par-3 17th hole falls downhill (but into the wind) to a green smack on the ocean. The downwind par-5 18th hole plays to razor-thin fairway along the ocean, an intimidating finish. Golfweek ranked The Abaco Club the no. 1 Bahamian golf course (no. 7 in the Caribbean and Mexico) in 2014.

A world-class practice facility for members like Clarke and South African Thomas Aiken, who earned his 2015-16 PGA Tour card for the first time at the recent Web.com Tour finals, was added in 2016.

The potential of The Abaco Club remains vast. There are hundreds of lots aching to be developed. Its beauty is unsurpassed. Guests who don't golf can kayak to the tiny Sugar Cay out in the bay to snorkel or play tennis or drink the day away at Pete's Pub & Gallery, a nearby boater's hangout. Sunday parties at Nippers Beach Bar & Grill, a ferry ride away on Great Guana Cay, are legendary.

"The goal and potential is to compete with Casa de Campo (in the Dominican Republic) as the best resort in the Caribbean," former Director of Golf Phil Johnson told me in 2015. "We feel like the service will take us over the top over other resorts in the Caribbean. The relaxed feel of the island and the club will make it feel like home."

It wasn't easy island-hopping to Great Exuma to find Sandals Emerald Bay. Two delayed flights from Bahamas Air and a seven-hour layover at the Nassau airport made it feel longer than necessary. But being Sandals-ized for the first time was worth the trip.

I recognized the touches left by Four Seasons after the 500-acre resort was shuttered in 2009 and rescued and rebranded by Sandals in 2010. Guests step out of the lobby to be greeted by a grand infinity pool with a swim-up bar overlooking Emerald Bay and a narrow beach. The rooms are immaculate.

Sandals lives up to its reputation for delivering high-end all-inclusive vacations. Several excellent restaurants are offered in addition to the usual buffets. I dipped my toes in the sand while splurging on lobster at the Barefoot by the Sea, a romantic restaurant on the beach. La Parisienne, which conjures up French cuisine, tends to book up fast, so sign up early. Cafe de Paris bakes guilty pleasures -- crepes, cookies, cupcakes and more -- all day. Butlers take service to the next level, although I didn't stay long enough to properly abuse one to get my money's worth.

After a difficult front nine through a jungle of mangrove swamps, the back nine gets even wetter, windier and wilder. Holes 11-16 follow the rocky shoreline of the bay and then the Caribbean Sea. There might not be a longer continuous stretch of coastal holes in the world as scenic as these. Not Pebble Beach Golf Links. Not Old Head Golf Links in Ireland. Not Teeth of the Dog in the Dominican Republic.

The problem is, on such an exposed site, golf balls get blown around like kites. Every hole -- especially the par-4 12th and par-3 13th -- is visually mesmerizing, but they aren't always playable. Norman didn't incorporate much room for bailouts.

If the Shark takes a big bite out of your ego, that's okay. There are plenty of cures back at the resort -- a drink at the pool, a shot of whisky at the Drunken Duck (an English pub) or a massage at the Red Lane spa. You're in the Bahamas to savor life, not fret about shooting 91.

Kira K. Dixon
Lifestyle Correspondent
Now Reading
Bahamas Breeze: The golf life is good at The Abaco Club and Sandals Emerald Bay
New Cookie Policy
WE AND OUR PARTNERS USE COOKIES ON THIS SITE TO IMPROVE OUR SERVICE, PERFORM ANALYTICS, PERSONALIZE ADVERTISING, MEASURE ADVERTISING PERFORMANCE, AND REMEMBER WEBSITE PREFERENCES. BY USING THE SITE, YOU CONSENT TO THESE COOKIES. FOR MORE INFORMATION ON COOKIES INCLUDING HOW TO MANAGE YOUR CONSENT VISIT OUR COOKIE POLICY.
CONTINUE
Search Near Me