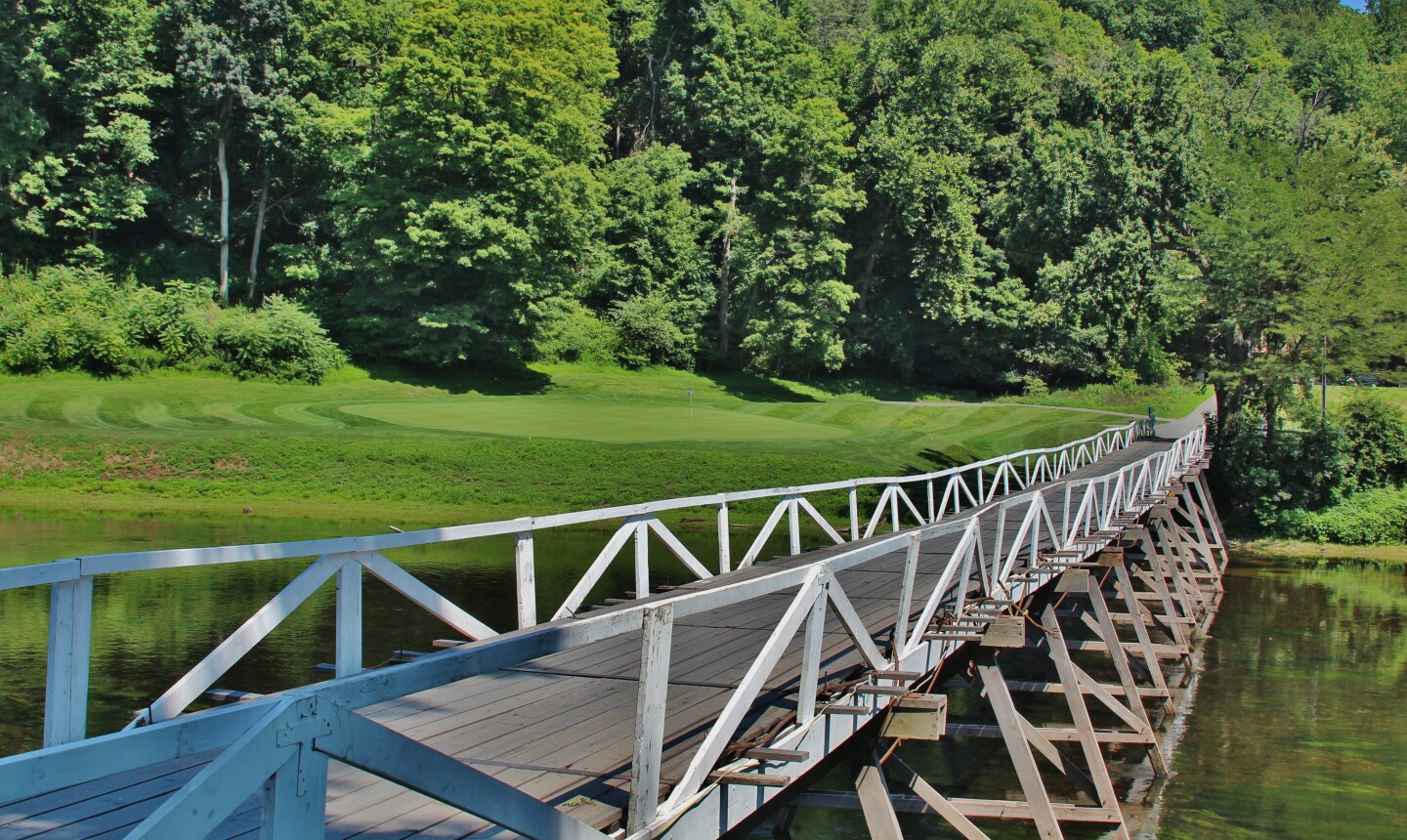 This bridge leads to the holes of Shawnee Inn & Golf Resort on the island in the middle of the Delaware River. Jason Scott Deegan/Golf Advisor 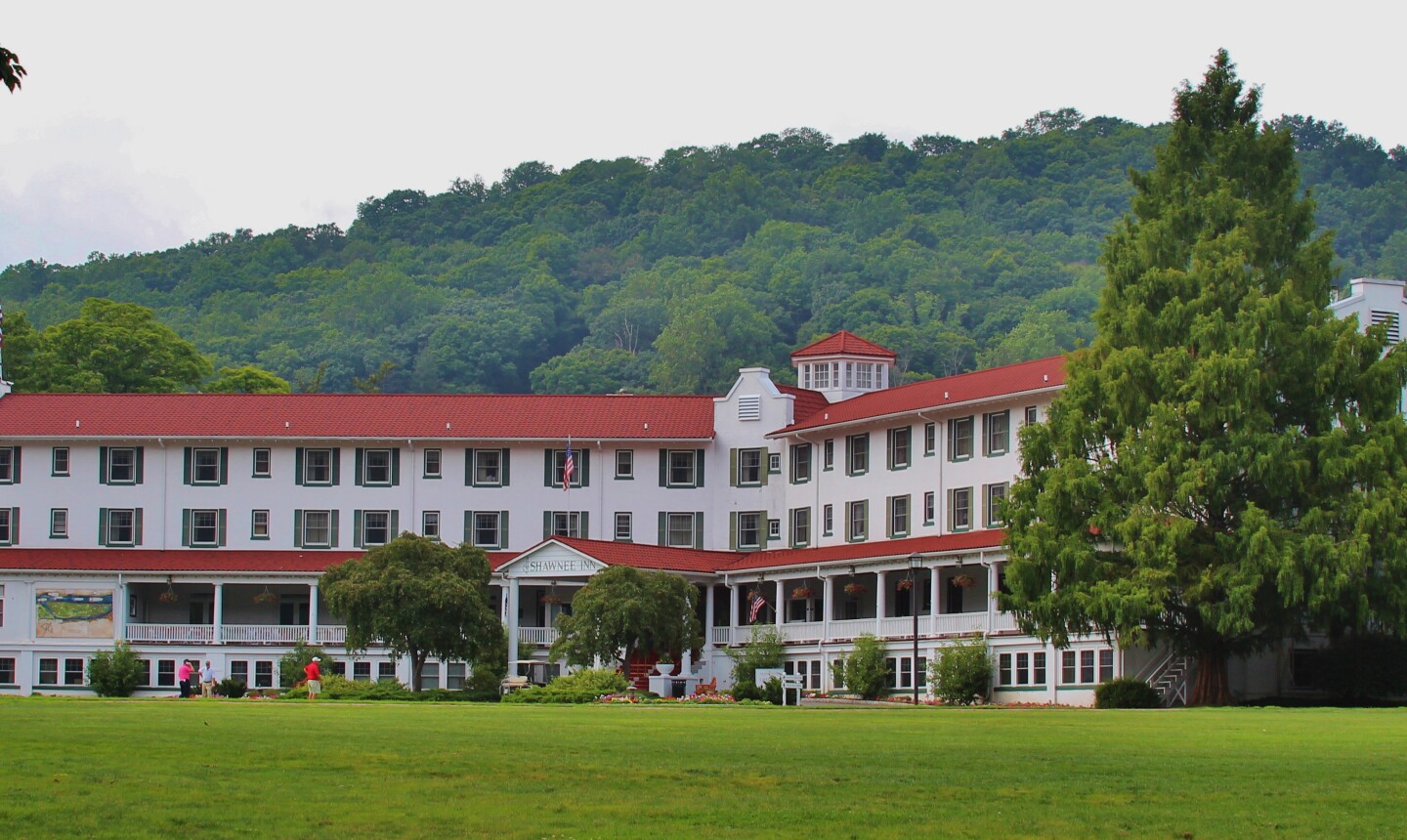 SHAWNEE ON DELAWARE, Penn. -- Three themes permeate throughout Shawnee Inn & Golf Resort: its history, its golf and its environment.

"When we have orientation with new staff, we talk about how people have been coming here and staying for 100 years," Shawnee General Manager Rob Howell said. "As soon as the glaciers formed it, people started living here. That's because of how beautiful and bountiful the land is."

It's not elaborate, modern facilities that attract guests to Shawnee, it's the stunning setting in the Pocono Mountains on the shores of the Delaware River, coupled with the historic personality of an inn and an A.W. Tillinghast course, both dating to 1911. The Inn has its visible wrinkles -- much like a grandparent.

But who doesn't love Grandma or Grandpa? Staying at the Inn delivers a warm feeling of days gone by. Think of the fond memories we all have of eating grandma's cookies or listening to a ball-game on grandpa's transistor radio.

The resort's vibe, created in a past generation, continues to charm visitors in a way newer facilities can't. There's the creaky wooden floor in the lobby and the old pictures hanging on every wall. It's odd to see guests perusing the Internet while sitting on the rocking chairs on the large Southern-style porch, but that's the day and age we live in. Even when we try to unplug from the real world, we can't. Thankfully, the Shawnee Inn is there to remind us of a simpler time.

Famous characters always seem to surface when revisiting Shawnee's colorful past. Paul Runyan upstaged Sam Snead, Shawnee's touring pro at the time, in the 1938 PGA Championship, which was a match play affair back then. In 1943, Fred Waring, a famous singer/entertainer, bought the place and renamed it the Shawnee Inn.

The one and only Jackie Gleason took up the game at the course in 1944. In 1967, a former football player named Hale Irwin won the NCAA Championship at Shawnee, essentially launching his Hall of Fame career.

It's easy to see how important golf remains to Shawnee. At the front entrance sits the Tillinghast Golf Academy, launched in 2003 out of a red-brick building dating to 1782.

The nine-hole, par-3 Tillinghast Approach Course designed by Tom Doak in 2006 and the lighted driving range are free of charge for resort guests. They both attract a hodge-podge of players -- many of them rookies -- trying their hand at this wicked game. A massive putting green sits in front of the Inn with the first tee of the Red Nine just steps away.

The golf course consists of 27 holes, a wonderful mess of Tillinghast holes intermingled with an additional nine by Bill Diddle built in 1963. Where Tillinghast holes begin and where Diddle ends can be confusing, but they mesh well, nonetheless. There's been talk of a renovation to unearth the original design, but those plans by Doak on are hold during this economic uncertainty.

Twenty four of the holes reside on an island in the middle of the Delaware River, giving them a secluded serenity. Golf carts reach the island by traversing a temporary white bridge rebuilt every season.

Each of the three nines have their charms. The second hole on the Red nine crosses the river 159 yards to the green on the other side. Both the Blue Nine and the White Nine feature three par 3s and three par 5s, a great combination for scoring. The signature shot is the 177-yard blast back over the river on the seventh hole of the Blue Nine.

Ollie Beall, a time-share owner visiting from New Bern, N.C., said the greens were in as good a shape as he's ever seen them after playing the course on a recent visit. "I call the course both fun and playable," he said. "The holes over the river are a challenge."

Shawnee's place on the edge of the Delaware Water Gap National Recreation Area allows guests plenty of outdoor entertainment, whether it be fishing, hiking, biking and more. The resort runs its own river adventures to rent canoes, kayaks, rafts and paddleboards. Trips anywhere from one hour to all day explore the winding Delaware River. Across the river hidden in the hills is New Jersey's leg of the Appalachian Trail.

In this age of going green, Shawnee Inn dove in head first four years ago, according to Howell, starting its own farm. This over-sized garden provides vegetables for the resort's fine restaurants, such as the elegant River Room and courtyard Bistro, both of which opened in 2007. The resort even takes a step back in time by harvesting honey from bees at its own apiary and by tapping maple syrup from the trees.

The resort's ShawneeCraft Brewing Co. launched in 2009, incorporating many of the flavored lagers and ales into the menu of the fantastic Gem and Keystone Brewpub located near the main entrance. Try the awesome pretzel-and-beer-cheese appetizer for starters, followed by the pulled pork sandwich with meat soaked in beer and lathered in a beer-based barbeque sauce.

The beer is also incorporated into the Spa Shawnee and Salon, which opened in 2007. While I was playing golf, my wife was cocooned in an all-natural beer-and-mud wrap during a soothing ShawneeCraft Wrap. She was even offered a beer after the treatment. How cool is that?

Local products are an emphasis, as well. Emma's Friends Soaps and Lotions, based in Pennsylvania, create all the magnificently scented soaps used in the guest rooms. Mother Nature might be Shawnee's ace-in-the-hole when it comes to impressing visitors.

"I always tell everyone that we are fortunate where we sit," Howell said. "It is one of the most beautiful places.