The Fairway News is a Cool Golf Thing

The town of Brookings, Oregon, in the extreme southwest corner of the state, has fewer than 7,000 residents, but it has a municipal golf course called Salmon Run. In addition to a golf course, it is also a boutique, niche media outlet.

Early Management Team, headed by Val and Gary Early, started running it in April of 2016 after the city purchased the struggling course. In addition to tackling a whole host of capital projects and deferred maintenance, the Earlys started up a monthly newsletter, the Fairway News, to keep Brookings-area golfers informed about course operations. Salmon Run is the only 18-hole course for about two hours in any direction (the nearest ones are located in the small seaside town of Bandon, which you've probably heard of), which means the almost entirely local clientele depends on Salmon Run running smoothly to satisfy their yen for golf.

The first issue, May 2016, includes a big green "THANK YOU!" shout-out for locals who volunteered their time to help kick-start the course's new life. With the exception of a combined August/September 2016 issue, there has been a newsletter every month since. Regular items are nothing particularly groundbreaking - updates on improvements, tournaments, hole-in-one announcements, wildlife (salmon and elks feature often), a few pictures and a charmingly no-frills layout - but it's the effort that matters, because it speaks to the level of care being put into the facility. From skimming a few newsletters over the last three years, it's clear that the Earlys and their customers are serious about making the course an asset the community can be proud of. No golfer has an excuse for being uninformed. Information is power, as they say, but at Salmon Run, it's also love. 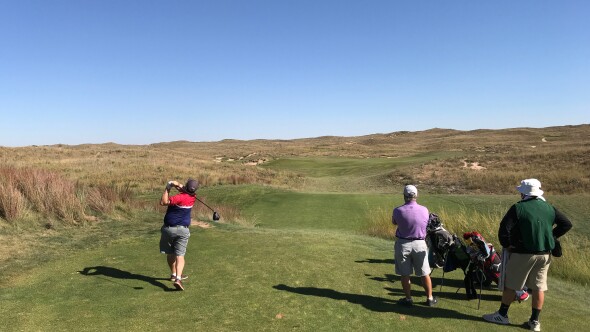